Archaeologists working on an emergency restoration project on the 6th-century church at the monastery of Abu-Fana in Mallawi, Minya, the condition of which is deemed life threatening, found three linen packets containing 370 old coins. The packets were uncovered during work to lift the rubble around the wall surrounding the old church.

Gamal Mustafa, Head of the Islamic, Coptic and Jewish antiquities sector at the Ministry of Antiquities, said that the coin packets were found buried at two metres deep. He said that 29 coins date back to the Roman era, and 341 coins date to the Islamic era. They are currently undergoing restoration and cataloguing, he said.

The Ministry of Tourism and Antiquities has assigned an archaeological mission to conduct excavations around the church to uncover its main entrance and surrounding buildings.

The monastery of St Epiphanius, known as Abu-Fana, is a 4th-century monastery that belongs to the first wave of monastic movements. It is located in the Minya region of Mallawi, some 300km south of Cairo, and is a thriving monastery to this day.

Abu-Fana’s had been the scene of a tragic incident on 1 December 2019. Three Copts, among them two children, met their death; and three others were injured when the wall surrounding the 6th-century church collapsed and fell on them.

The victims, from the Assiut town of Qoussiya, had gone to the monastery on pilgrimage to attend Mass at the old church. The wall which fell on them was the mud brick western wall of the church courtyard. The 260-square-metre mud brick church is still in use today for worship.

Given that the 4th-century monastery and its 6th-century church are listed with the Ministry of Antiquities, the Ministry referred the case to the public prosecutor. It claimed that it had addressed the Coptic Church more than once last year on taking the necessary measures and providing the funds required for restoration of the declining church building. Egyptian law 117/1983 says that cost of restoration of antique buildings at old churches or mosques should be shouldered by the respective religious authority jointly with the Ministry of Antiquities, under supervision of the Supreme Council of Antiquities. The monastery, for its part, alleged that the ministry had procrastinated in issuing the required restoration permits. 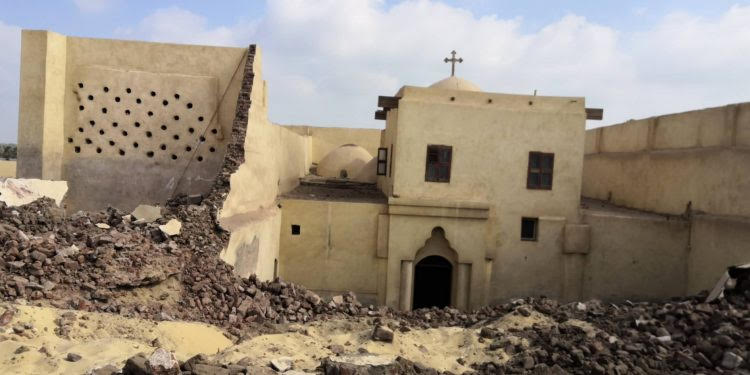