Anba Antonios, Coptic Orthodox Metropolitan of Jerusalem and the Near East, told Watani that an Israeli high court convened Sunday 28 October and issued the following resolutions:

• The court rejected the request presented by the Coptic Orthodox Patriarchate in Jerusalem to do the required repair inside Deir as-Sultan’s church of Michael Archangel, on the grounds that it is a historical site and its restoration comes under the charge of the Israeli Antiquities Department.
• The court accepted the request made by the Coptic Orthodox Church’s lawyer to limit the repair to two spots in the church: the spot from which the stone fell from the roof, and the crack beneath. The Coptic Church’s lawyer had contested the Israeli municipality’s request to repair four spots. The lawyer said that two of the spots had nothing to do with the damage incurred by the stone which fell last year.
• The court accepted allowing the Coptic Orthodox Church to have an Israeli-licensed construction engineer supervise the repair works. The engineer has the right to immediately contest with the court any violations to the spots agreed upon, in which case the court will issue an order to immediately halt the works. The Palestinian engineer Simon Couba was chosen for this responsibility.
• The Coptic Orthodox Church had requested to shoulder all expenses related to the repair works, according to the law and to a memorandum it had sent to the municipality. The court said such a decision was out of its jurisdiction and fell under the jurisdiction of the municipality. 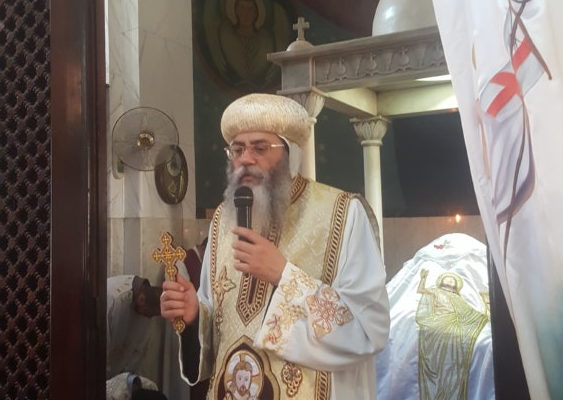 “The problem is not yet resolved,” he said, “but the recent court rulings have organised a few points. The Israeli government wishes to expand the repair works to the entire church as a first phase of restoring the monastery. This would play into the hands of the Ethiopian monks [who currently occupy it and wish to seize it from its Coptic rightful owners] and establish them in the monastery. It would also obliterate what remains of Coptic identity there. The court ruling prevents the Israelis from doing so.”
Anba Antonios said the Coptic Church fears that the municipality would ask the court to expand the repair works under the pretext that the monastery’s current condition is life threatening [the monastery has undergone no repairs for some 80 years now]. The problem is, he explained, that the court is not the technical authority to decide on that.
“Let us go on praying,” Anba Antonios concluded. “I am grateful for your love and active support,” He expressed special thanks to Anba Pimen, Bishop of Naqada and Qous, and Head of the Coptic Church’s Crisis Management Committee for following up on the crisis with Egypt’s Foreign Ministry and security authorities; also to construction engineer Kamel Michel for his constant efforts on part of the monastery.

Israeli court … and government
For his part, Mr Michel explained that the Israeli government had legally questioned the execution of the 1971 supreme court’s decision which ruled that the monastery is owned by the Coptic Church and should be handed to it. It said the supreme court’s decision was not relevant because it concerned a religious dispute between the Copts and the Ethiopians. The court, however, had decided about the unequivocal Coptic ownership of the monastery, but translating it on the ground required the Israeli Cabinet to form a committee to decide and take action on the matter. But to date, the Cabinet has refrained from doing so.

For full story of Deir as-Sultan and the current crisis: