Pope Tawadros, who is on a European pastoral tour that started on 9 October and has for the first time included France, was received by President Emmanuel Macron at the Elysée Palace in Paris on 18 October. President Macron warmly welcomed Pope Tawadros, greeting him as he disembarked from his car at the Elysée entrance.

The meeting saw the two men discuss current conditions in Egypt, with the Pope explaining that the country is already on its way towards full development, and that the situation of Copts was seeing positive moves. Most important, he said, was the 2016 Law for Building and Restoring Churches; and the public display of appreciation for Copts shown by President Abdel-Fattah al-Sisi who has made it a tradition to visit St Mark’s Cathedral every Christmas Eve. Recently, the Pope said, the first female Coptic governor was appointed to Damietta.

The President and Pope also tackled the topic of education, with the Pope saying that Egypt is on a project of education reform, especially in the foundational years, and expressing wishes that France would support education in Egypt.

Noteworthy is that during the official visit paid to Egypt by President Emmanuel Macron in January 2019, he was received by Pope Tawadros at St Mark’s papal headquarters in Abbassiya, Cairo, the discussions between President and Pope focused on education as the key to build productive, advanced societies. President Macron had started by saying that his visit to Pope Tawadros reflected how much the French people respected the Coptic Orthodox Church and its role in both the history and future of Egypt. He thanked Pope Tawadros for receiving the French delegation for educational affairs dispatched by President Macron earlier with the objective of helping Middle East Christians in the cultural scope. The President and Pope agreed that education was vitally important, with President Macron insisting it was a foremost battle in which his country wished to support Egypt. 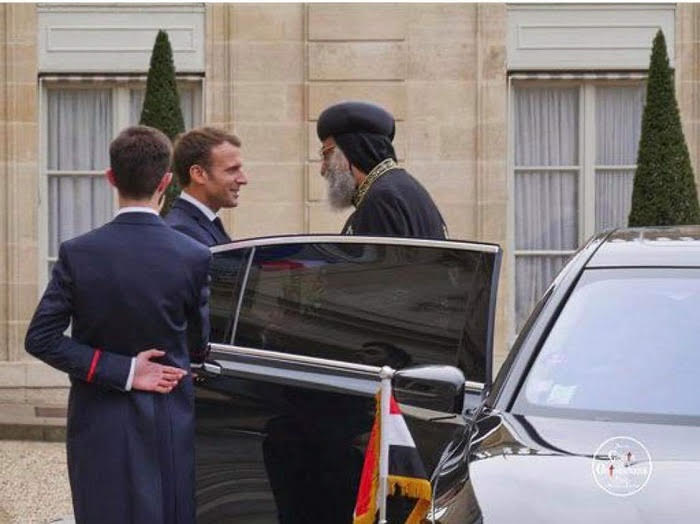 Our Father Nile and Mother Land

Pope Tawadros also visited the French Senate (Sénat), where he was received by its president, Gérard Larcher, and a number of its members.

The Pope paid a visit to the Egyptian Consulate in Marseille where he was welcomed by Egypt’s Consul-General, Hisham Maher, and held a meeting with Marseille’s Mayor, Renaud Muselier.

During the visit, His Holiness spoke of Egypt and its rich history. “Egyptians,” he said, “who, apart from 2 million living outside Egypt, number 100 million, among them 15 million Copts. They live together on the land on the Nile bank, so that we can rightfully say that the Nile is ‘our father’ and the land our ‘mother’.”

He noted that today Egypt faces two battles: the first against terrorism, whereas the second is the battle for achieving development. “We already have ongoing development projects and we are asking for the help of friendly countries such as France.”

Accompanying the Pope was Anba Luka, Coptic Bishop of Southern France and the French Part of Switzerland. 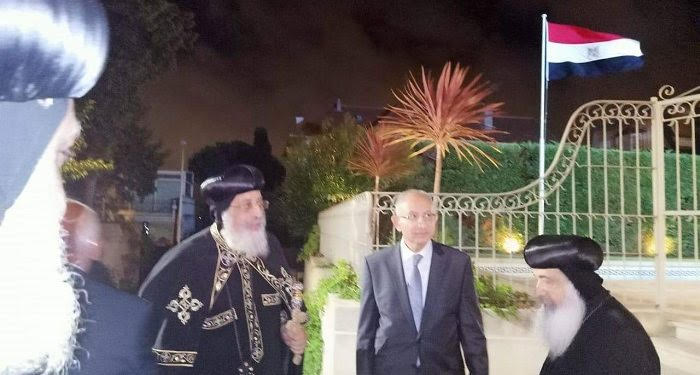 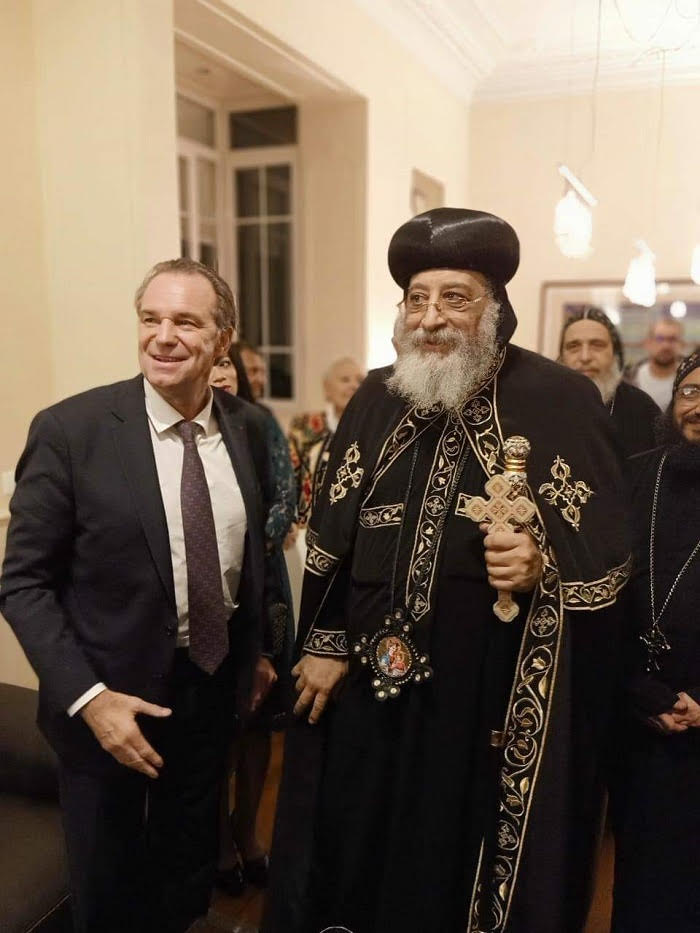 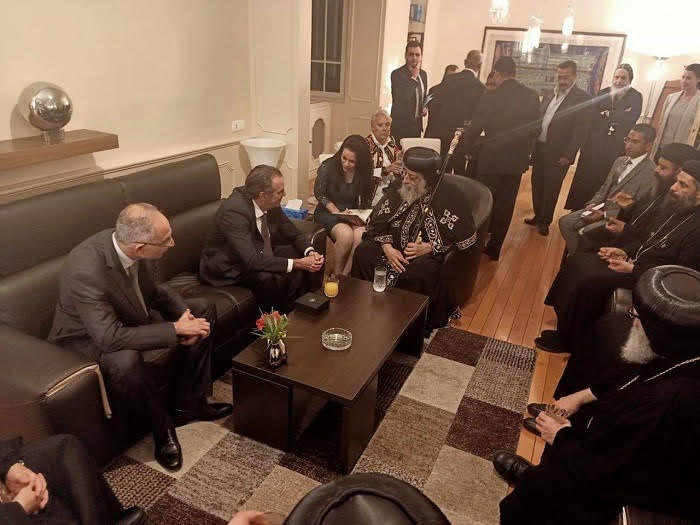 Arriving at the French city of Lyon, Pope Tawadros visited the church of the Virgin Mary and the Two Martyrs Abu-Seifein and Mar-Mina, and Anba Antonios. Among those who received the Pope and warmly welcomed him was Cardinal Philippe Barbarin, Archbishop of the French Catholic Church in Lyon. When the Pope presented Cardinal Philippe with a Coptic icon of the Holy Family as a gift, Cardinal Philippe joyfully lifted it up with both hands in appreciation. The Pope was treated to a performance of hymns and praises by the church choir. 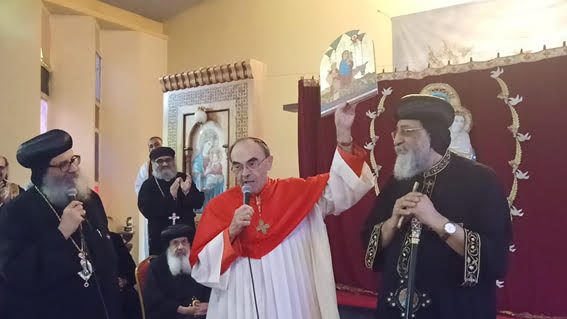 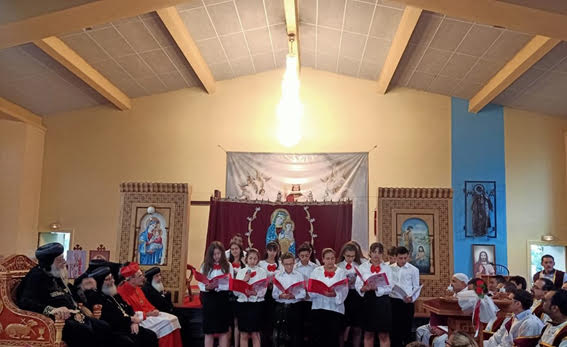 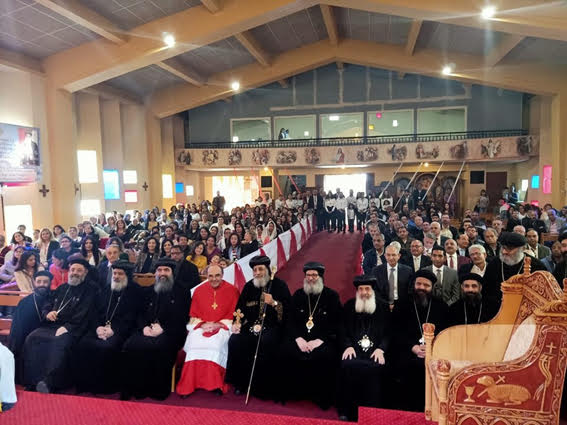 The Monastery of St John Cassian in Marseille was among the highlights of Pope Tawadros’s visit to the south of France. John Cassian (c. 360 –  c. 435 AD), also known as John the Ascetic and John Cassian the Roman, was a Christian monk and theologian known for his mystical writings. He is noted for his role in bringing the ideas and practices of Christian monasticism to the early medieval West. St John visited and lived in some of Egypt’s monasteries where he was influenced by Coptic monasticism. In southern Gaul near Marseille, St John Cassian founded the Egyptian-style Abbey of St Victor in 415, currently St John Cassian Monastery. It was a complex of monasteries for both men and women, one of the first such institutes in the West.

The Pope was received at the monastery by Archbishop Jean-Marc Aveline. He prayed and took a blessing from the relics of St John Cassian, which are are preserved in the monastery. He was keen to write a message in the monastery guestbook. “Love never fails,” he wrote. 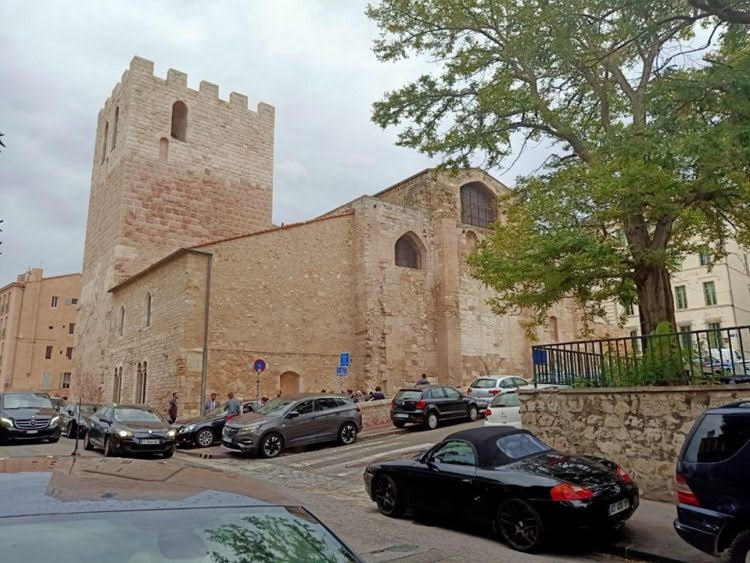 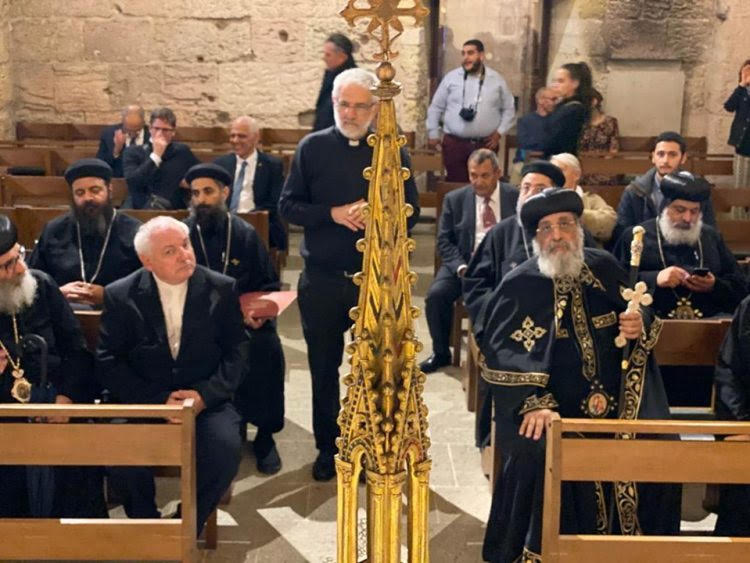 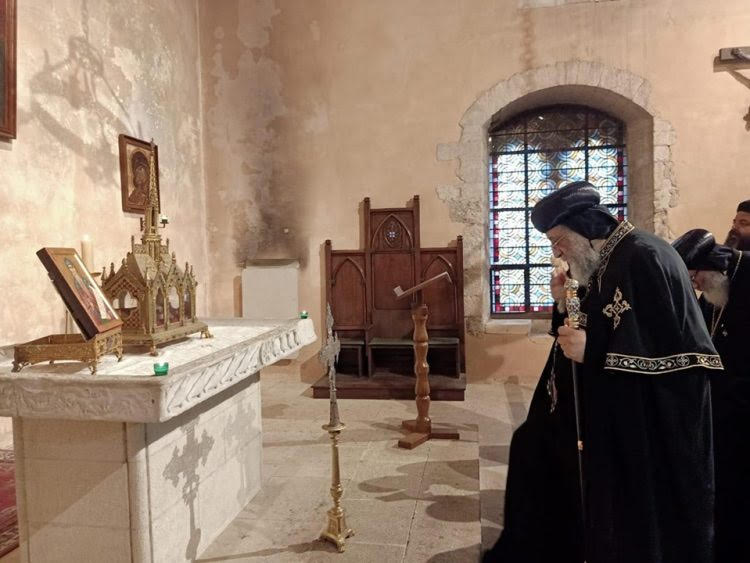 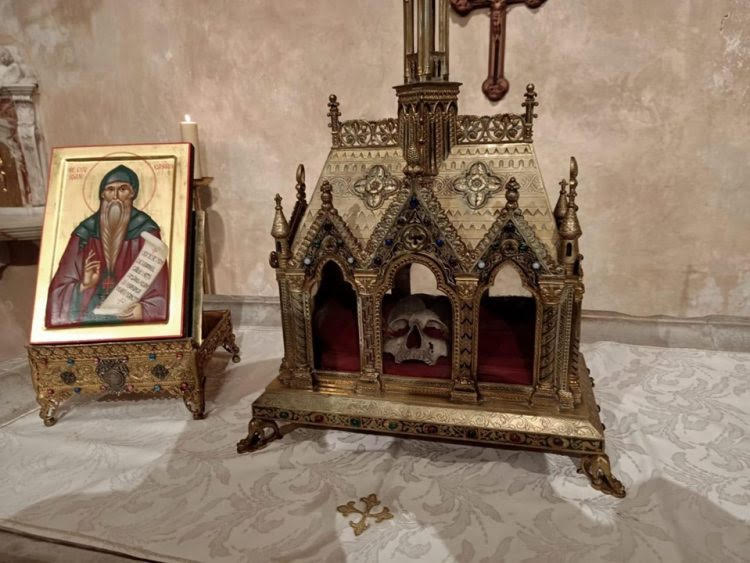 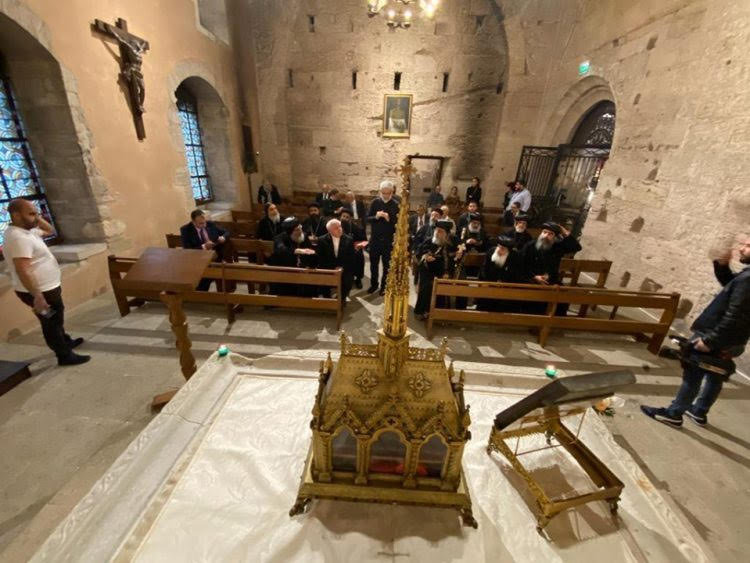 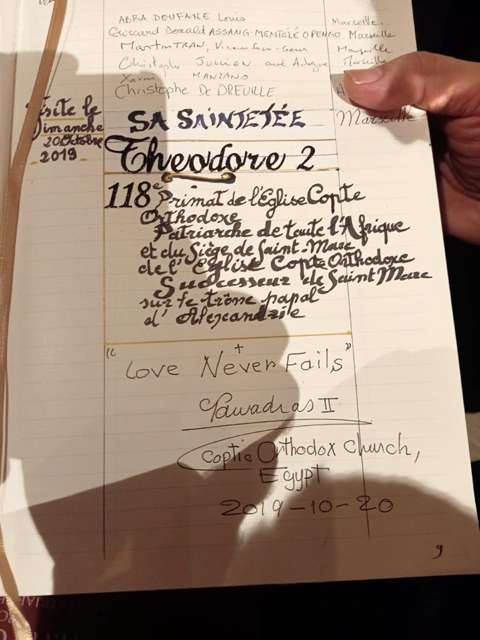 Pope Tawadros had interrupted his visit to Paris, which stated on 9 October, to tour Belgium, returning to Paris on 18 October to meet President Macron and head to south of France.

On 15 October, the Pope left Paris by train to Brussels where he was received by Egypt’s Ambassador to Brussels, Khaled al-Baqly. He visited the European Parliament which was then in session, meeting its President, MEP David Sassoli. Attending the session were György Hölvényi MEP from Hungary, Co-Chair of the EPP Working Group on Intercultural and Religious Dialogue; and MEP Iratxe García Pérez, leader of the Progressive Alliance of Socialists and Democrats in the EU.

The Pope wrote a word in the VIP guestbook, expressing his happiness at visiting the European Parliament, and remarking on the improved conditions in Egypt. 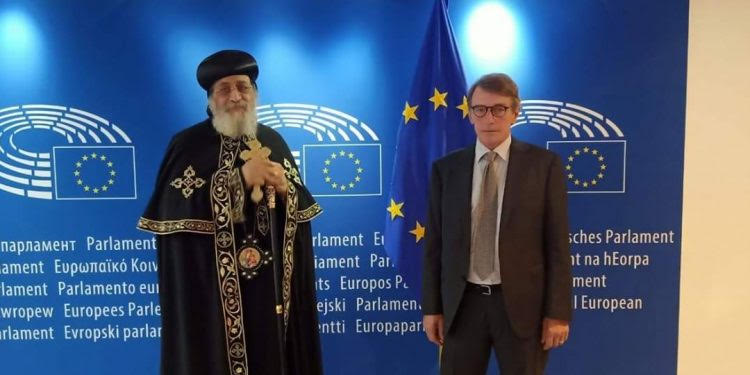 In Leuven and Antwerp, Pope Tawadros prayed at churches of the Holy Virgin and the Apostles, and the Holy Virgin and St John the Evangelist. He consecrated their altars, baptismal fonts, and icons, anointing them with the holy Myron Oil. Participating in the consecrations were Anba Danial, Bishop of Maadi and Secretary-General of the Coptic Orthodox Holy Synod; Anba Athanasius of the French Coptic Church, Bishop of Marseille and Primate of Toulon and all France; Anba Arsany, Bishop of The Netherlands; Anba Luka of Southern France; Anba Marc, Bishop of Northern France and Paris; and Anba Mikhail, Bishop of Hadayeq al-Qubba churches.

The Pope met the Roman Catholic Bishop Johan Bonny of Antwerp, as representative of the Catholic Church that previously owned what is today the Coptic church of the Holy Virgin and St John the Evangelist. He presented him with a gift of appreciation, and also honoured individuals who had helped in transferring the ownership of the church from the Catholic to the Coptic Church. 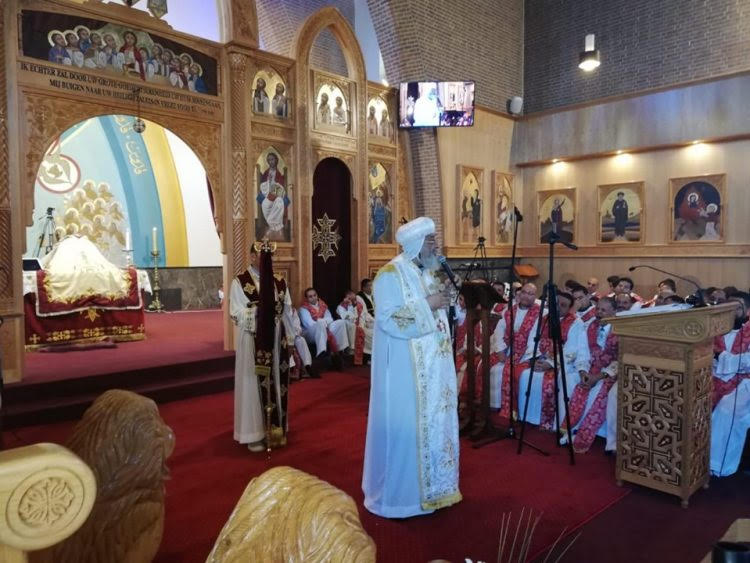 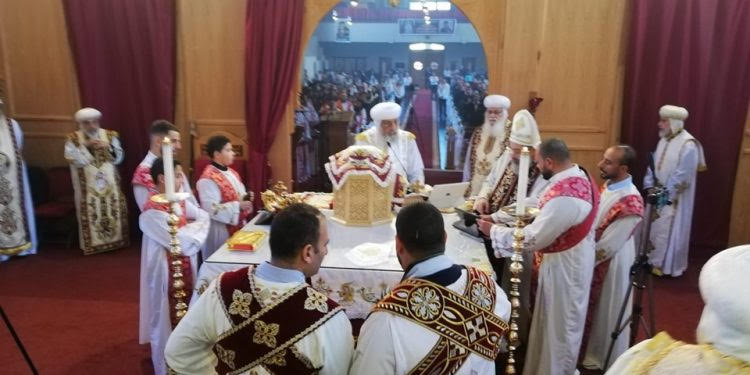 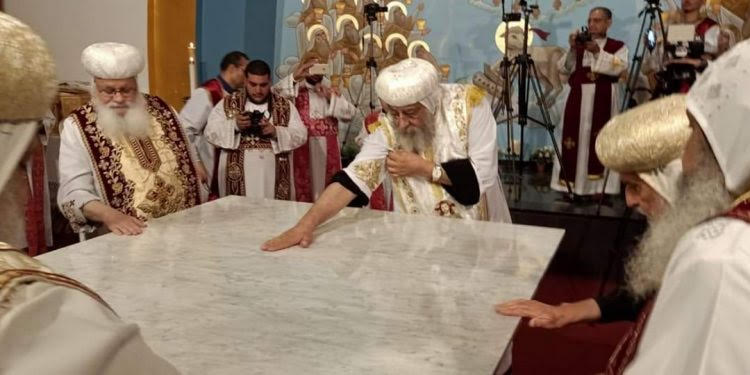 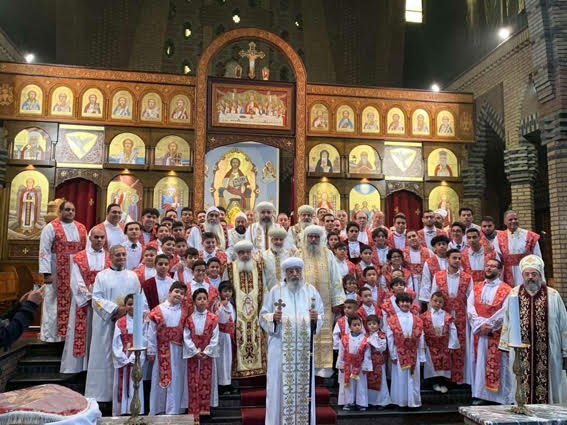 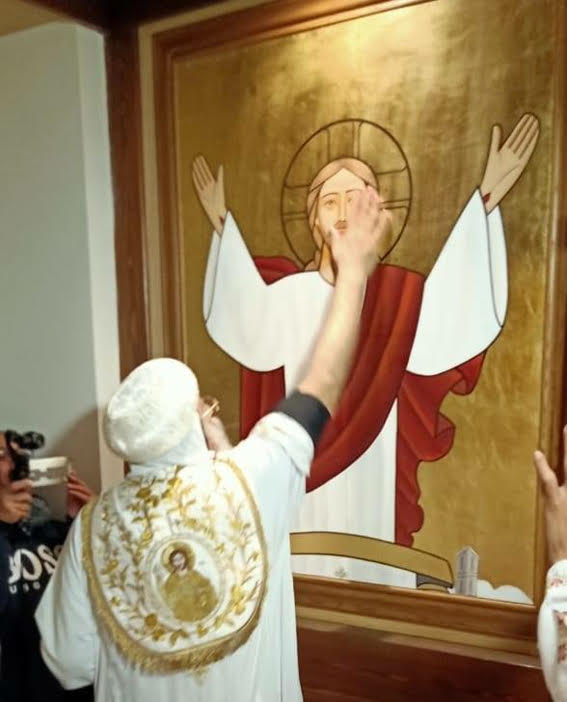 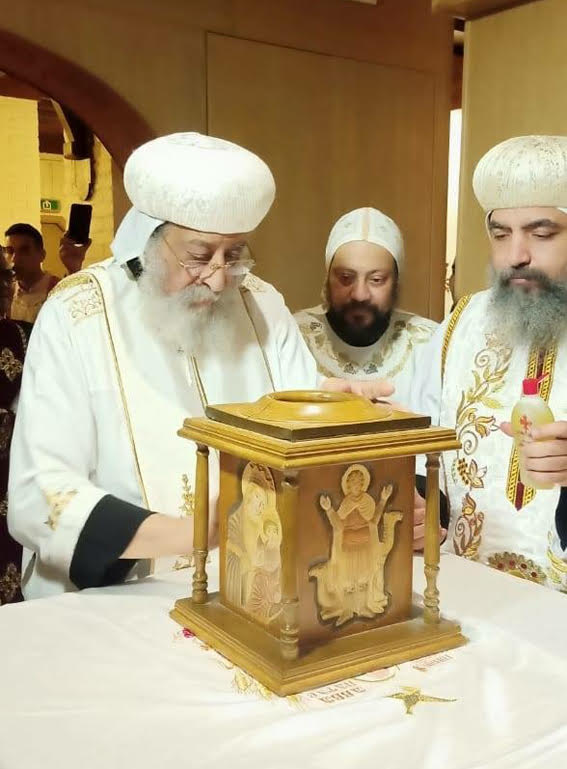 With his visits to France and Belgium concluded, Pope Tawadros headed to Vienna on 21 October mainly for a medical visit. The Pope, who has long suffered from back problems, has been a patient at a medical establishment in Austria for several years. In December 2017, he underwent successful spinal surgery in Munich.