Pope Tawadros II today presided over the funeral service for Anba Epiphanius, the late Abbot of the Monastery of St Macarius the Great in Wadi al-Natroun in Egypt’s Western Desert, who passed away two days earlier at age 64.
Anba Epiphanius was murdered during the early hours of Sunday 29 July, hit on his head from the back by a sharp heavy object, by an unknown assailant or assailants. He had just left his cell and was heading to the church for Midnight Praise that precedes Sunday Mass, and was found by an elderly monk who occupied a cell close to that of the Abbot, as he also left for the church. The Abbot was found, face down, lying in a pool of blood.
Pope Tawadros was immediately informed; he hastened to delegate a number of bishops to check on the matter, as well as on the monks and monastery. The homeland security authorities and the prosecution were directly notified; they headed to the monastery, together with a criminal investigation team and forensic medicine investigators. The monastery was closed until investigations are completed. A post mortem investigation was conducted on the Abbot’s body, and investigations are ongoing but no outcome has yet been announced. The instrument of the crime has not been found.
It is not yet clear whether the culprit came from inside or outside the monastery. Some two weeks ago, the monks had caught a prowler who had sneaked in, and handed him to the police. 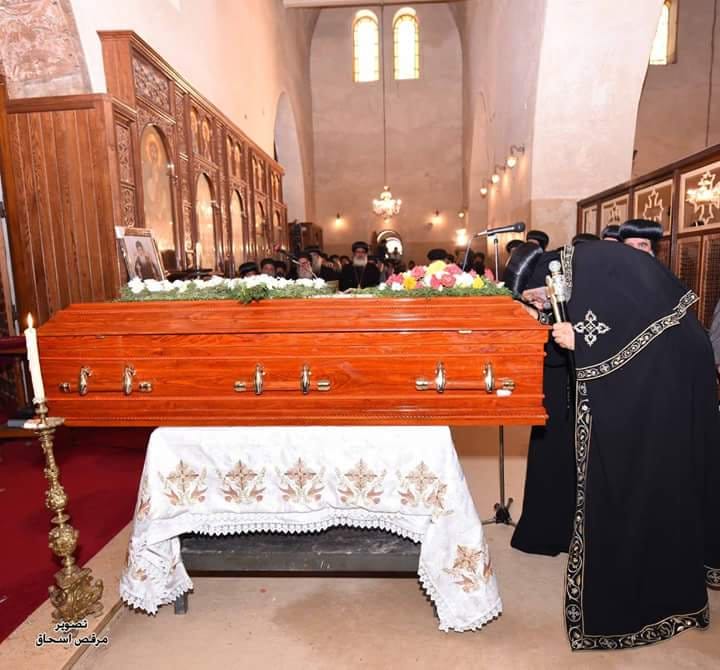 Pride of the Church
The funeral service was held at the 4th-century monastery church of St Macarius. Pope Tawadros presided over the service which was not open to the public; the attendees included solely bishops, priests, St Macarius’s monk assembly, members of the Coptic Orthodox Melli (Community) Council and the Coptic Religious Endowments Authority, and the late Abbot’s family.
The Pope was visibly grieved. He began the service with the traditional Thanksgiving Prayer and moved on to the Bible readings and the supplications said for the souls of those who pass away.
Pope Tawadros’s sermon focused on his beloved Anba Epiphanius who he described as a “light that shone for all of us”. The Pope said that, “despite the excruciating pain we feel for losing him, we bid him farewell on hope of the Resurrection.
“Our faith is firm in the Pantocrator who controls life up to the minutest detail, and until we depart from it. We believe He is the maker of all good; He grants His bountiful gifts to the righteous and the evil, and lets His sun shine on the just and unjust. He loves not sin, but He loves sinners and gives them the chance to repent and atone for their sins.”
The Pope mourned in Anba Epiphanius a loving, gentle, joyful monk whose life was steeped in meekness and humbleness; also a scholar who possessed a wealth of knowledge that fruited research and publications in various branches of ecclesiastical studies.
“Anba Epiphanius,” Pope Tawadros said, “represented the Church in countless conferences and symposia. He was the pride of the Church for his profound knowledge.”
The Pope said that the late Abbot’s love and knowledge endowed him with great wisdom; “I consulted him on many matters,” he said, “and invariably found his views invaluable.” 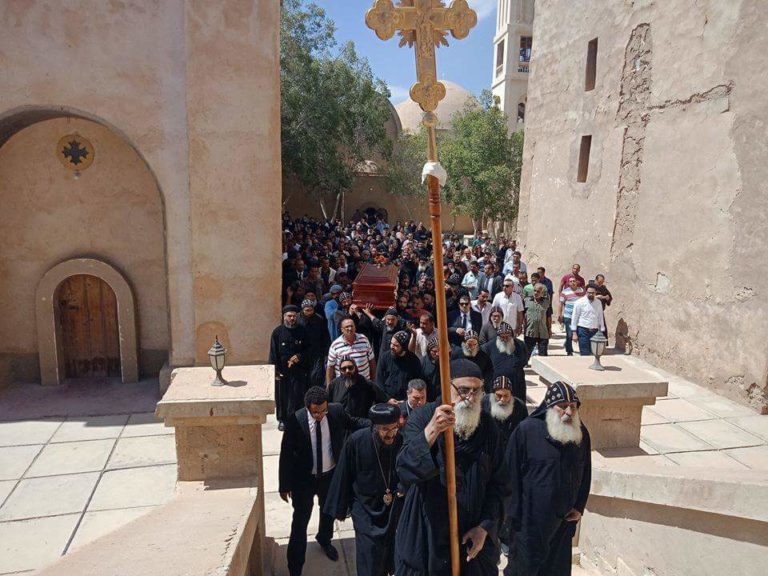 Blessed…
Pope Tawadros said: “Anba Epiphanius took orders at St Macarius’s when he was 30; he became Abbot 30 years later, in 2013. His leadership of the monastery lasted a mere five years, but they will forever impact the monastic tradition.
“He led a very simple life of no worldly possessions—his choice of cell, clothes and food testify to that—yet his quietude and sweet smile revealed the depth of the peace which engulfed him. He always prayed for peace for all souls, for the monks, the Church, Egypt and the whole world.”
Pope Tawadros concluded his word with an outpouring of emotion: “Anba Epiphanius was a light in our holy assembly. Blessed is his name which will live on and on. Blessed is this monastery which gave us this rare man; blessed is the family that produced this prelate who gave light to the universe.
“I testify before you here that he was a unique monk of calm and profound peace. We lose much if we do not follow in his footsteps. Wherever he set foot, he brought with him peace and grace.
“He is now in Heaven, in presence of the Lord, His angels, and His saints. He intercedes on our behalf, praying for us and for the Church.
“Despite the pain, we lift our eyes up towards Heaven which grants us comfort and tender mercies.”
Once the service ended, the coffin of Anba Epiphanius was taken in a monk procession preceded by the cross held high, to be buried in the monastery’s “Tafous”, the burial place of the monks. The Pope insisted on leading the procession, and said the final prayer before the coffin was placed in the slot allotted to it. For a final blessing, he stretched out his hand and touched the coffin of his beloved Anba Epiphanius. 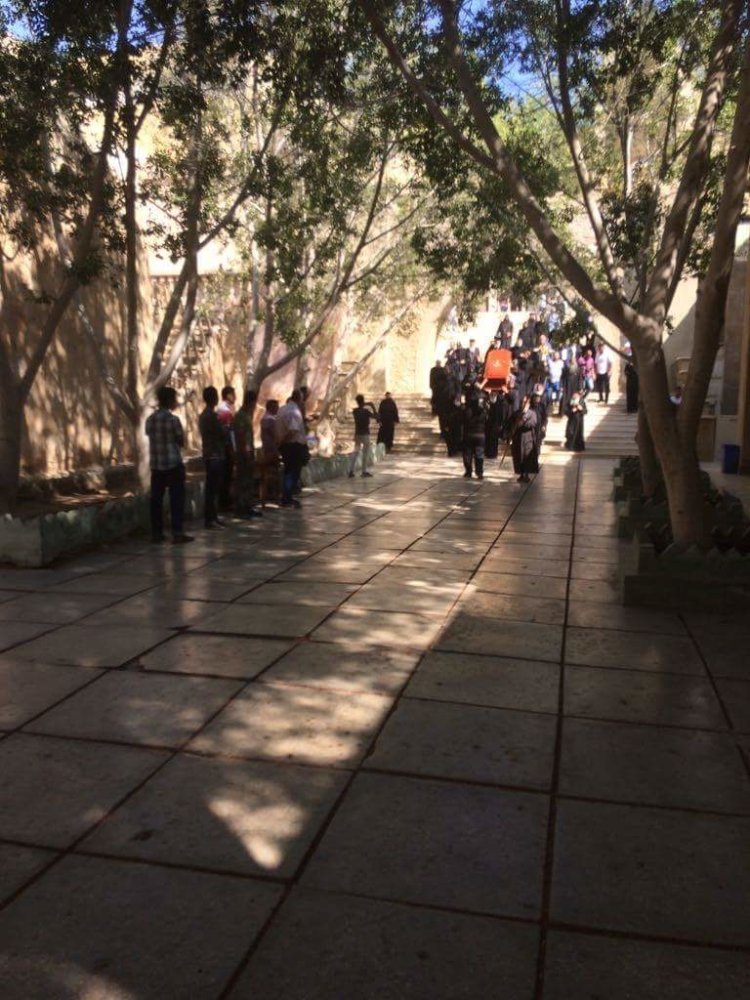 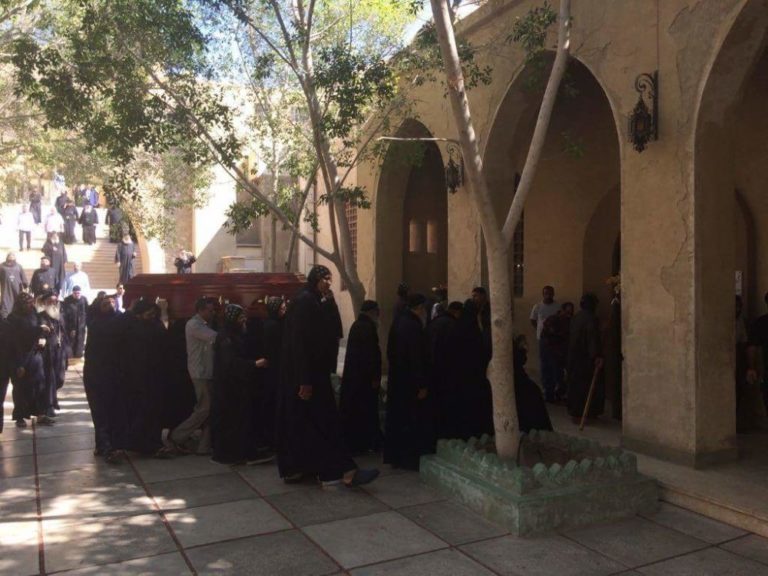 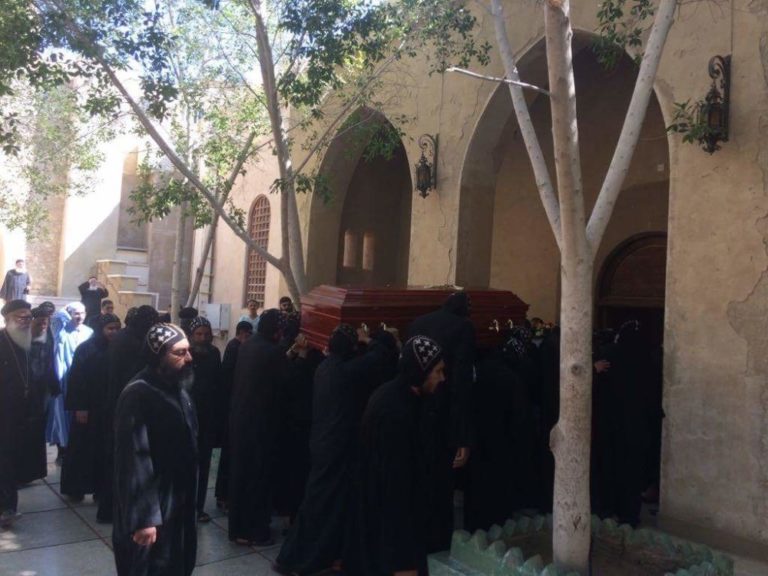 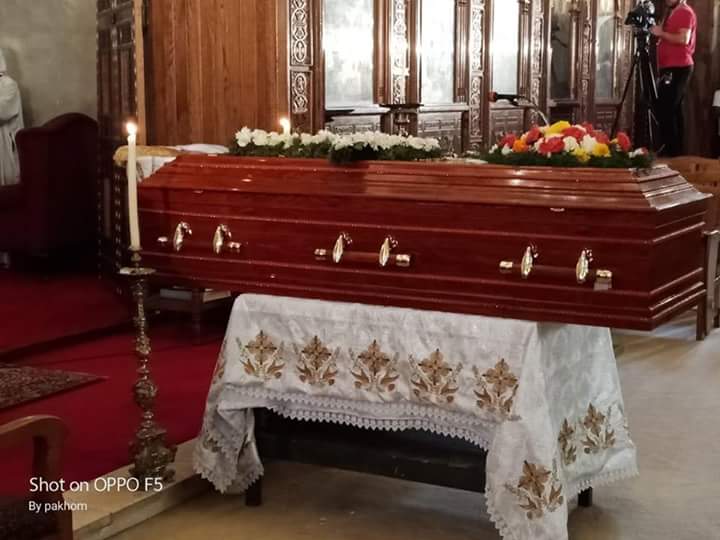