It was painfully déjà vu. It was Friday, weekend in Egypt, and Coptic pilgrims from Minya, some 250km south of Cairo, boarded a bus and microbus and headed to the Western Desert monastery of Anba Samueel al-Muetarrif, St Samuel the Confessor, to spend a day of spiritual retreat and, when that was over, have fun. At the same time, an extended Coptic family from the village of al-Kawamil in Sohag, a further 150km south, boarded a bus and set off to St Samuel’s to christen a baby.

The three vehicles converged on the monastery which lies in the desert west of Minya, some 220km southwest of Cairo. They spent the day there then, at around 2pm, boarded their buses for the trip home. 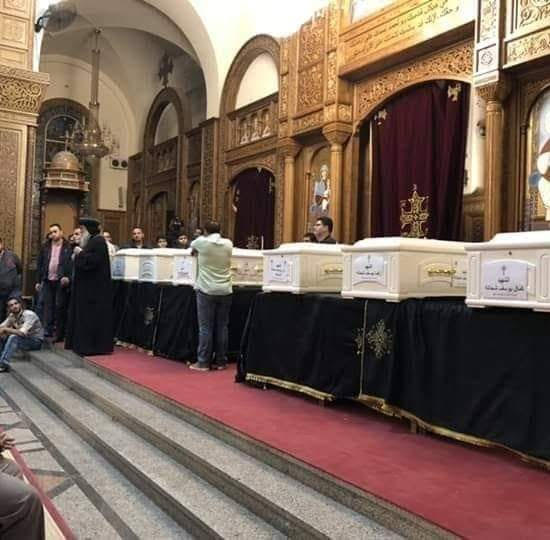 They had hardly driven a few kilometres when, from the nearby plateau, a four-wheel drive vehicle descended, stopped, and armed masked men in military uniform disembarked. The Sohag and Minya buses rushed away, but the Minya microbus was not so lucky. Before the driver could speed up, the masked men shot him dead. After that it was child’s play for them to kill the passengers. They shot seven dead, and injured 15, then fled to safety.

The survivors were somehow able to get help from the monastery where they informed the police. The road to the monastery is out of reach of any communications network. The police and ambulance arrived; the injured were moved to hospital, with the more critical cases moved to military hospitals by order of President Abdel-Fattah al-Sisi. 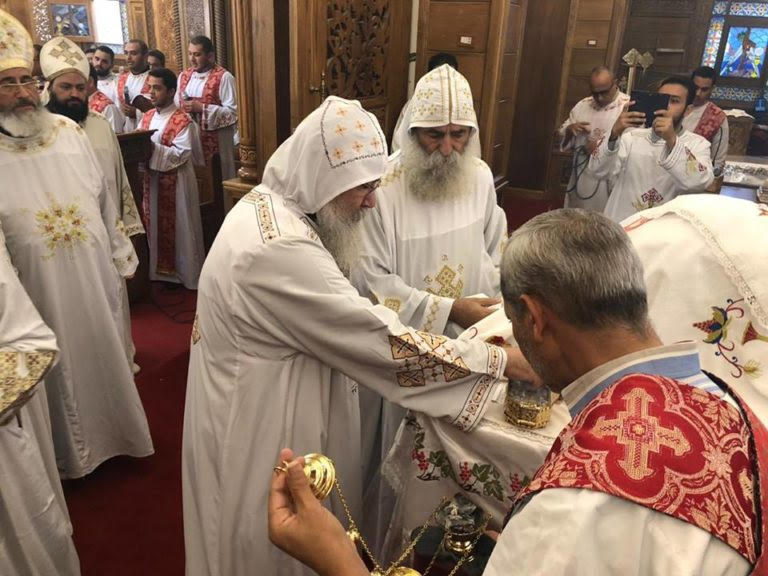 The crime outraged Egyptians in general, and Copts in specific. What was especially galling was that a similar shooting had taken place little more that a year ago, on 29 May 2017, in the same spot, claiming 28 lives. Pilgrims to the monastery had been shot by Islamist militants in four-wheel drives, who barricade themselves in hideouts in the nearby desert caves. An ongoing war rages between them and the police but, seeing that they get their arms and provisions from Libya across a long, porous border, the battle appears to reach no end. Egypt’s western border with Libya extends along some 1000km.

A survivor, however, claimed the buses had taken the main road and were stopped by the police checkpoint. When several buses arrived to visit the monastery, the survivor said, they were allowed in with police escort. Neither claims could be verified.

President Abdel-Fattah al-Sisi condemned the terror shooting and called Pope Tawadros for condolences. On his Twitter account, he mourned the dead, terming them martyrs, and wished the injured a speedy recovery. He promised retribution, writing that “we will go on fighting black terror; the culprits will be found and brought to justice. Such attacks shall not break the will of our nation to survive and rebuild.”

Pope Tawadros issued a video statement in which he said: “We are deeply pained at the loss of our children who fell victim to the terror incident on the road to the monastery of St Samuel’s in Minya, leaving martyrs and injured.” He thanked the President for his sympathy, and the Health Minister for the efforts of the health authorities on the part of the injured. The Pope extended profound condolences to the bereaved families, and prayers for recovery of the injured. “We trust in the Lord,” he said, “we submit ourselves to His hands. We trust His divine justice and care for us and for our country. We pray for His comfort for all the bereaved families.”

Pope Tawadros delegated the bishops: Anba Danial, Bishop of Maadi and Secretary-General of the Holy Synod; Anba Yulius, Bishop-General of Old Cairo Churches; and Anba Dumadius, Bishop of 6 October City and Ousseem to visit the injured in hospital. 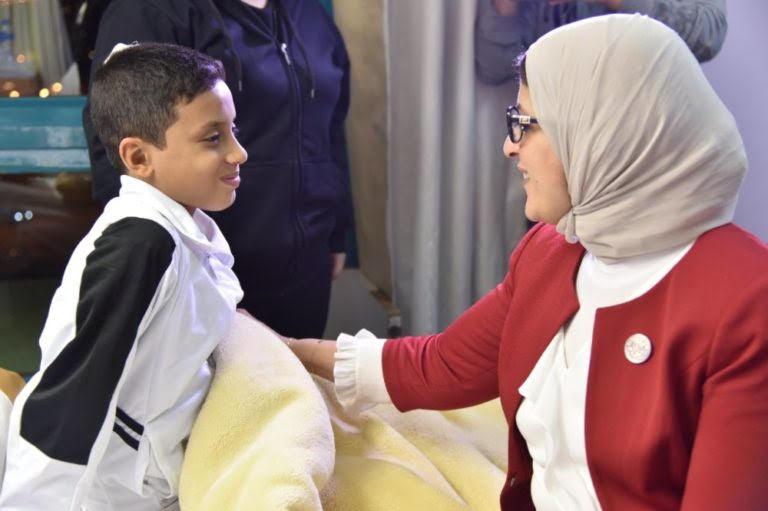 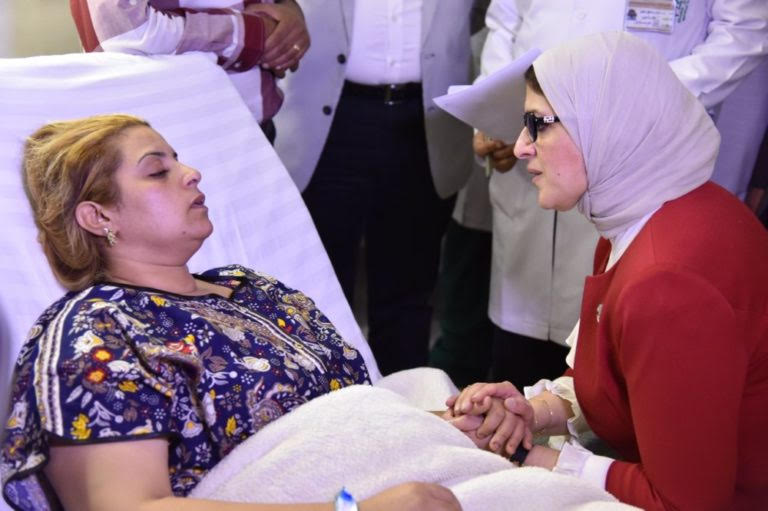 Later in the evening, Health Minister Hala Zayed visited the injured, as did Ghada Wali, Minister of Social Solidarity who also ordered that each of the bereaved families be given EGP100,000 and the injured EGP50,000. The victims, she said would be treated by the State as “martyrs”, meaning their families would be eligible to numerous benefits. 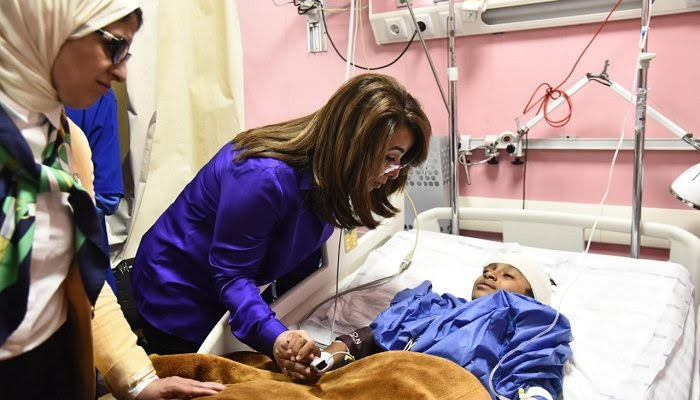 Due credit, and demands

On 3 November, the funeral service was held for the victims, considered martyrs of faith, at Minya’s church of al-Amir Tadros. Anba Macarius, Bishop-General of Minya, was joined by more than ten bishops in officiating the funeral. Attending was Minya Governor Qassem Hussein. Anba Macarius said the martyrs would be buried in their family tombs for the time being till a shrine is prepared for them in Minya. 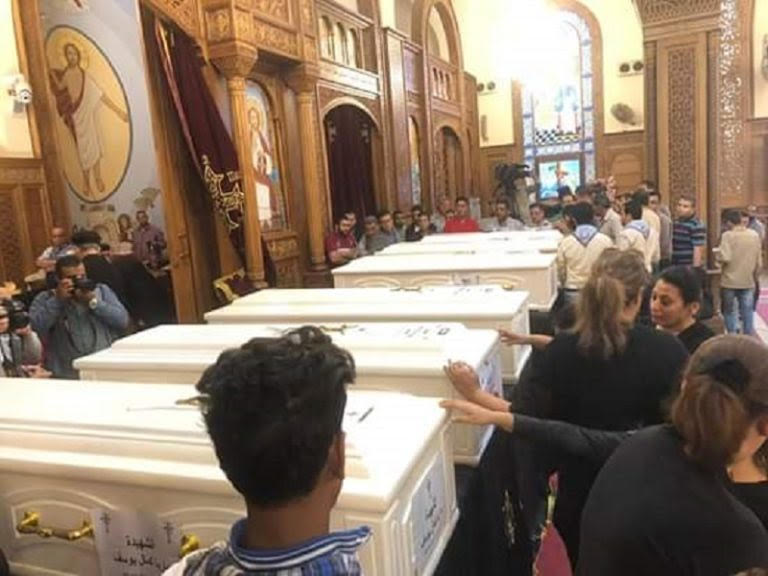 A day later, the Coptic Church in Minya held the Third Day prayers for the deceased. The Third Day service is a Coptic tradition reminiscent of the Resurrection. It is held at the home of the deceased to comfort the grieving family. The Minya service, however, was a collective one for all seven victims, and was held at the church of al-Amir Tadros in Minya with Anba Macarius presiding over the service. Huge numbers of mourners queued to offer condolences to the bereaved families; the funeral and condolence ceremonies had seen the participation of tens of thousands of mourners.

Anba Macarius told the congregation: “You expressed your anger yesterday when I thanked Minya’s governor and officials. You should know that they stayed up all night following the shooting, and made considerable effort to speed and facilitate the procedures required till the martyrs’ bodies could be here for the funeral, also to respond to our every need. For this we have to be grateful. But we have demands which we voiced since the attack of May 2017, and which if fulfilled might have averted this incident. We demand that the road to the monastery be paved and that it be provided with communications facilities and cameras, also that more police checkpoints should be stationed there.” 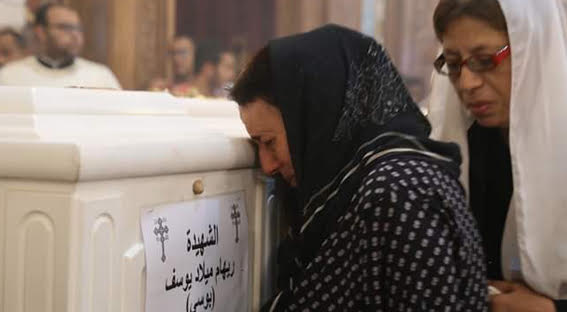 A statement issued by the Interior Ministry on 4 November, two days after the shooting, informed that the police had raided a hideout of IS terrorists, among them those who had executed the St Samuel Monastery operation, in the desert west of Minya. Clashes with the terrorists left 19 of them dead. Information about them and legal proceedings are being processed. 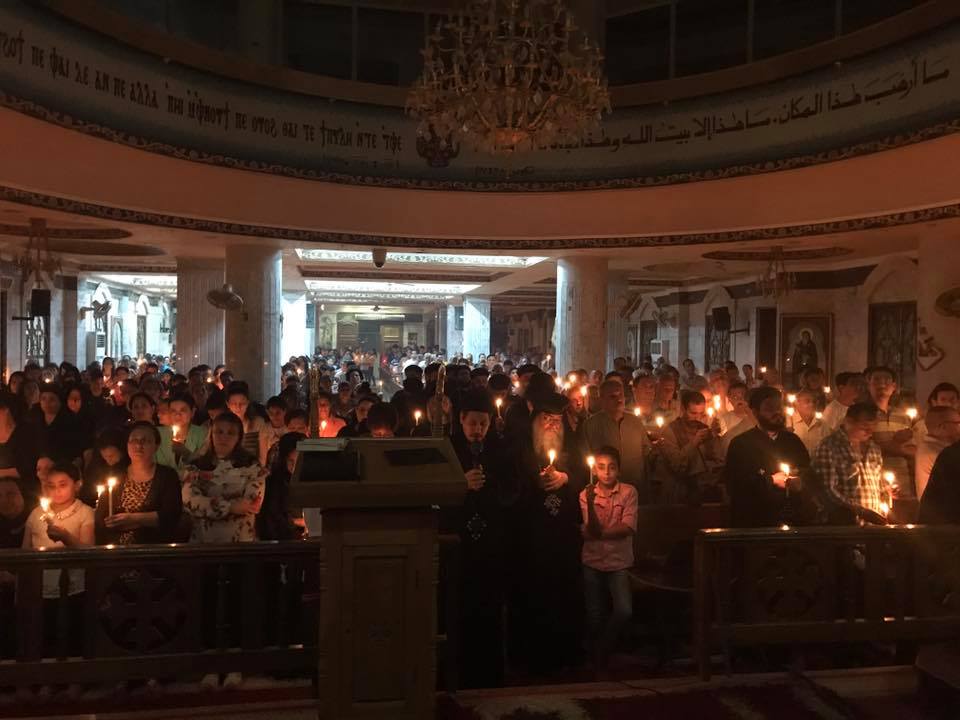 On 5 November, Anba Macarius organised a candlelight vigil for the injured and the souls of the seven recently martyred Copts. The vigil was held at the church of the Holy Virgin in Abu-Qurqas, Minya, and witnessed the participation of dozens of priests and hundreds of the Coptic congregation. Holding candles, the clergy and congregation joined Anba Macarius in hymns and prayer. They prayed for the souls of the deceased, and asked the Lord to comfort the pained hearts of those who lost loved ones; and to heal the injured.

For Watani’s coverage of the May 2017 attack: