Threat of Coronavirus generates controversy over Communion in Coptic Church

As threat of the increasing spread of COVID-19 has escalated worldwide, Coptic churches in various parts of the world have had to take measures, sometimes drastic, to protect their congregations. Perhaps the most drastic was in Italy’s Milano where, according to orders by the Italian government, Mass, services, and all activities were halted until further official notice.

In Greece, France, and Australia, Coptic congregations were notified that women needed to carry their own scarves instead of the ones usually provided in church, also that the kerchiefs used to cover the mouth after partaking of the holy body of Christ in Communion would no longer be available. Disposable, single use plastic cups would be provided to drink water after communion.

In Egypt, where no COVID-19 infections were reported, many churches applied the new rules as cautionary, hygienic measures. The were accepted by the majority of the congregation, basing on the argument that they were mere custom that had nothing to do with the actual sacrament of Holy Communion; in fact, not a few among the congregation already applied them out of general hygiene considerations.

The matter gave rise to heated controversy over social media, however, when some bloggers began questioning the hygiene of the manner of administering the sacraments in the Coptic Church. The body of Christ is administered as small, bite-size pieces of bread by the priest, and the blood of the Saviour is administered with a common spoon, called “mesteer”.

One blogger, Sameh Masry, wrote: “Coronavirus, if it enters Egypt, will really teach Copts a few lessons. If Copts insist on changing nothing of there ways, they will become a major cause for spread of the virus. Copts should stop kissing the hands of bishops and priests, and the Church should stop using a common spoon and one chalice in Communion. Common use of kerchiefs can help spread the virus.”

Journalist Nader Shukry broadened the discussion to include not only practices applied during Communion, but also a plethora of other widespread Egyptian behaviours. “Talk of the common spoon used in Communion,” he wrote, “is besides the point. Just look at us Egyptians in so much that we do! Restaurants in overcrowded districts are notorious for merely rinsing plates and spoons with water instead of giving them a good wash; smoking shisha in cafes throws to the wind all hygiene; people hold on to surfaces in public transport and escalators; overcrowding in buses and metro carriages; people who pray in mosques bend their faces down to the carpets or rugs on the floor, and we know the virus remains there for 12 hours; and so many many other practices that make it almost impossible to avoid spread of the virus if ever it reaches Egypt. The matter is far beyond the use of “mesteet” in churches; we need to rethink all our common behaviours and life styles.”

On CTV, a Christian independent TV channel, presenter Nancy Magdy, said that using personal scarves, kerchiefs, or cups, had nothing to do with the sacrament of Communion; these were mere common practices that could change because of hygienic considerations.

Commenting on the demand to stop using the mesteer in Communion, Mariam Safwat wrote: “I believe utensils that have been anointed with Myron, the Chrism (holy oil), and then come in contact with the blood of the Saviour, can never be a source of infection. Rather, they are rather a source of healing.”

Another blogger, Michael Milad wrote: “If the mesteer could be a source of infection, we wouldn’t have one priest alive by now! Because, apart form Coronavirus, there are contagious diseases around us all the time, viruses and microbes carried by many of those partaking of Communion. And the priest is usually the last one to have Communion himself. So how can it be that most priests are in good health? How could they survive all the viruses and microbes they allegedly take in on a regular basis?”

Writer Mary Malak posted the comment: “To those who express concerns about spreading the virus through Communion, I pose the question: How many viruses have infected the world throughout its history, but was there any illness that ever spread especially among those who have Communion?” 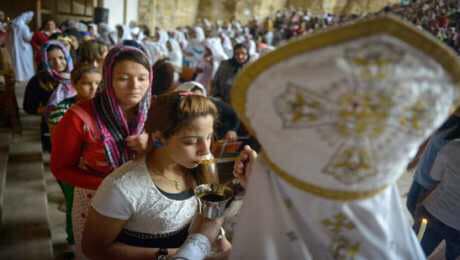