On third anniversary of their martyrdom, Pope Tawadros II opens a new church in honour of Boutrossiya Church’s 29 martyrs..

Who among Copts does not remember in anguish the day, three years ago last December, when 28 Coptic worshippers lost their lives during Sunday Mass at the Cairo church of St Peter and St Paul, famous as al-Boutrossiya Church, in? A suicide bomb tore up the church that morning, killing and wounding women, children, and men. The terror blast was claimed by Daesh, the Islamic State IS, who sounded elated at their ‘triumph’. The following day, 12 December 2016, Boutrossiya bells tolled for the martyrs’ funeral service, as 49 lay in hospital receiving treatment for their wounds. One of the wounded died, bringing the number of martyrs up to 29. The Coptic Church declared they would be officially recognised as “Martyrs of Faith” and would be cited in the Coptic Synaxarium, since they had lost their lives on account of their faith.

Boutrossiya bells rang again three years later, on 11 December 2019, to commemorate the martyrs. This time, however, Pope Tawadros was there presiding over a memorial service held for them during Vespers. Their portraits, crowned in glory and topped with crosses, were paraded down the church aisles by a deacon procession, the Pope raising incense before them. He then opened a small church built in their honour in the grounds of Boutrossiya; the new church was named the “Church of the 29 Martyrs of Faith”. 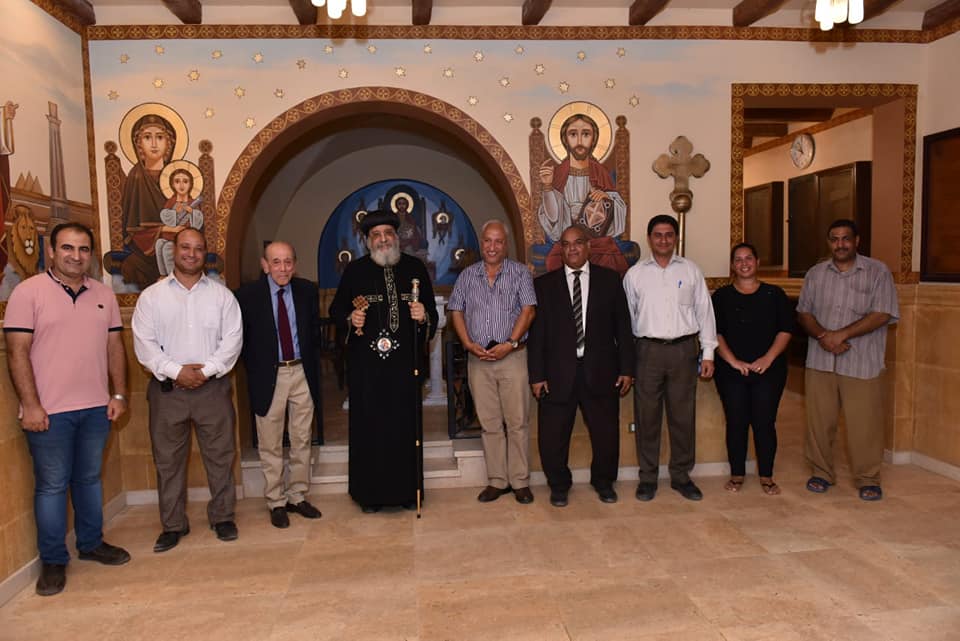 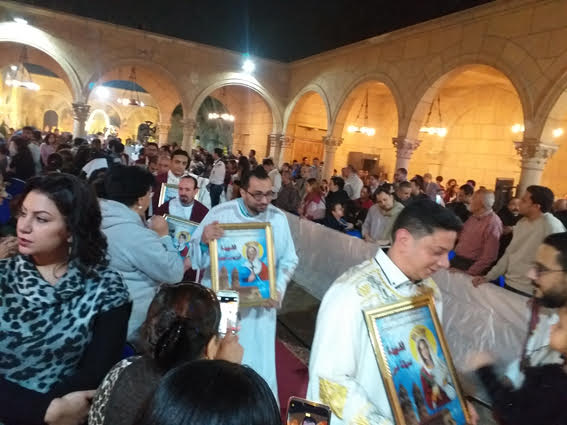 Until the new church was opened, the martyrs had been honoured in Boutrossiya Church in a shrine built in their name. Countless visitors made pilgrimage to the shrine for blessing and to pay tribute to the modern-day martyrs. In April 2017, Pope Francis paid an official two-day visit to Egypt during which, accompanied by Pope Tawadros II, he laid flowers at the shrine. The two Popes held an ecumenical memorial service at Boutrossiya.

President Emmanuel Macron also visited the shrine while on an official visit to Egypt in January 2019. 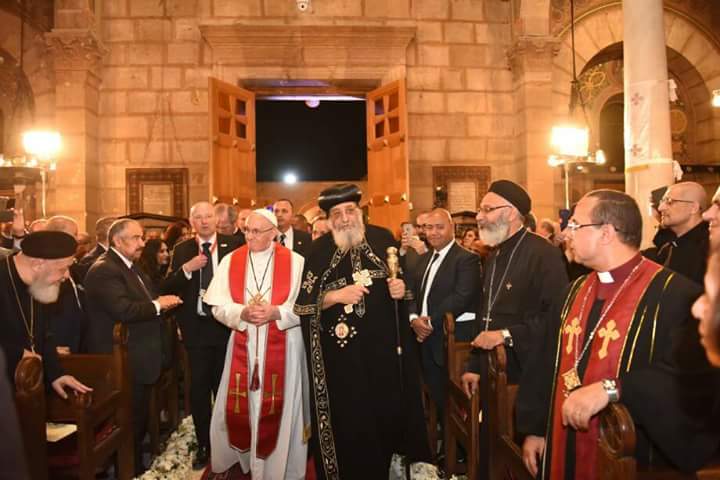 To explore the story behind the new church of the 29 Martyrs of Faith, Watani met Michel Boutros-Ghali, superintendent of Boutrossiya Church. 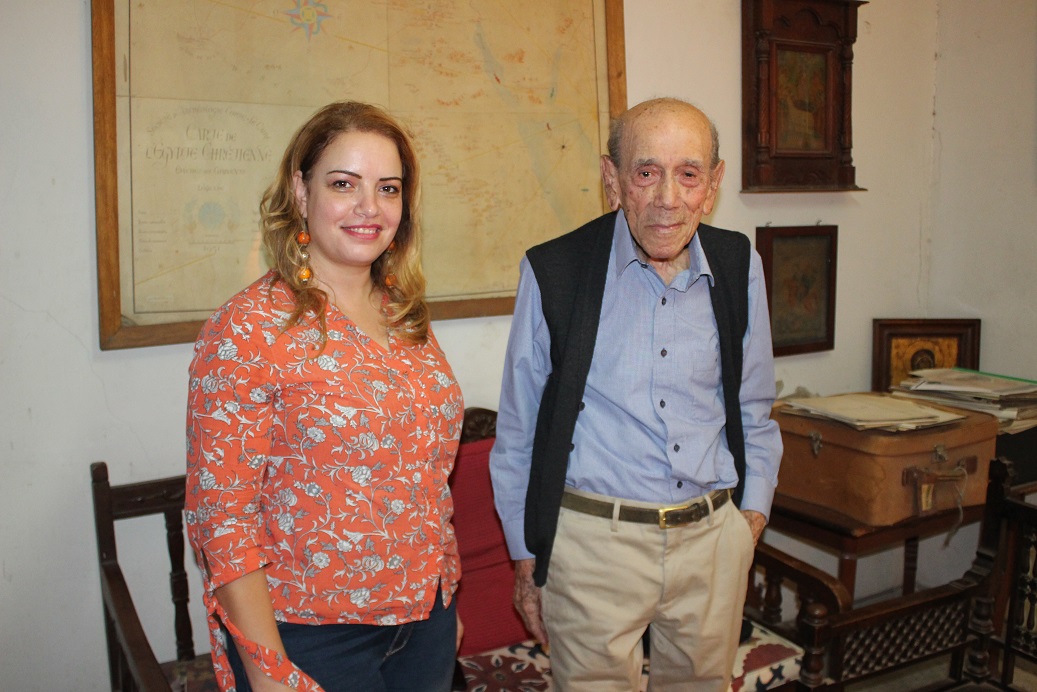 Mr M. Boutros-Ghali reminded that the church was built by the Boutros-Ghali family in 1911 following a tragic event in Egypt’s modern history. The dean of the family, Boutros Pasha Ghali (1846 – 1910) was a patriot who became the first Copt in Egypt’s history to be awarded the rank of Pasha. He held several important positions in the Justice Ministry; was appointed Minister of Finance in 1893, Foreign Minister in 1894, and finally became Prime Minister in 1908. On 20 February 1910, following allegations of favouring the British who were then occupying Egypt, he was shot by Ibrahim al-Wardani, a young Egyptian nationalist; he died the following day. 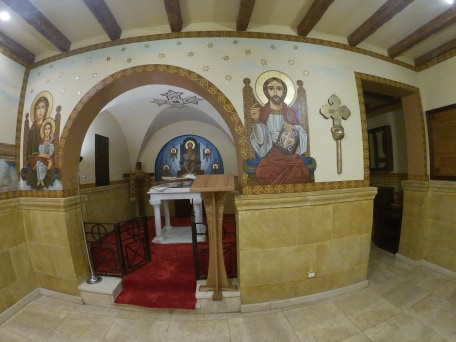 The church of St Peter and St Paul was built a year later by the Boutros-Ghali family above the tomb of Boutros Pasha Ghali, in what was then a Coptic cemetery on the outskirts of Cairo. As urban expansion encroached on the district, the cemetery was moved outside Cairo and the land was used by the Coptic Church to build St Mark’s Cathedral and a number of Coptic institutes. Today, the only family-owned church in Egypt, al-Boutrossiya, is adjacent to St Mark’s. The sarcophagus of Boutros Pasha Ghali lies in the crypt which acts as a burial place for the family. 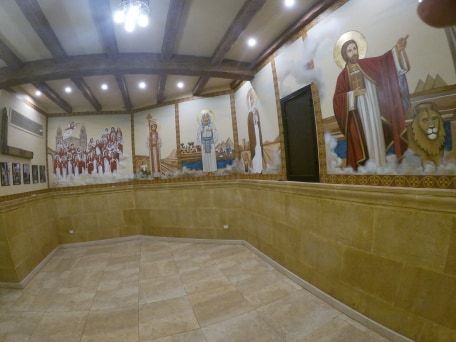 Mr M. Boutros-Ghali explained that, in the wake of the 2016 bombing, the Egyptian Armed Forces did an excellent job of restoring Boutrossiya Church and opening it for worship by the New Year 2017. Yet they made sure relics of the bombing should remain in situ, to bear witness to the atrocious blast. “We were preoccupied with the idea of commemorating the martyrs in an honourable manner,” Mr M. Boutros-Ghali said, “but found it extremely difficult since the original church was so completely oriented towards commemorating the Boutros-Ghalis; any other commemoration appeared second to that. All we could do was to build a shrine for the martyrs against a wall that carried their portraits and a large panel on which their names were inscribed. Visitors could light candles there. For us, this was inadequate tribute. 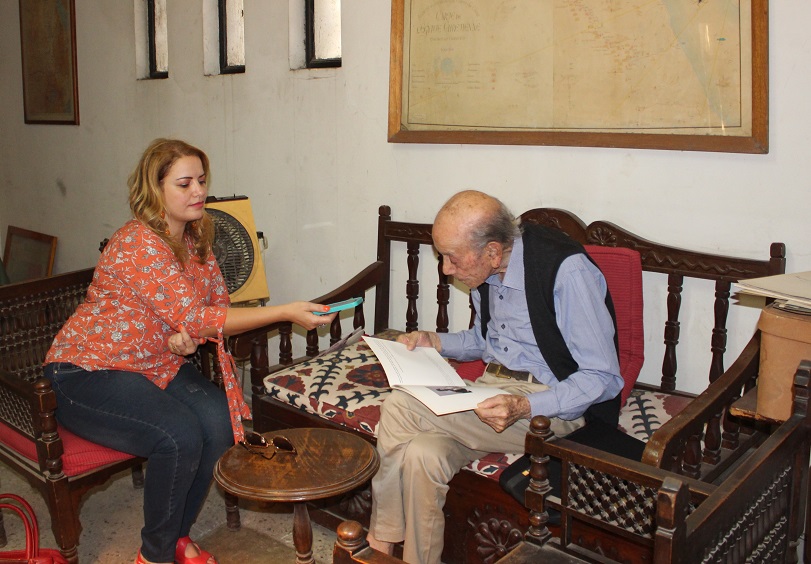 “After much thought and deliberation with the church priests Fr Antonios Mounir and Fr Boulos Boutros, we came up with the idea of turning a small building that stood on the border between St Mark’s and Bourtossiya, and that housed a bookshop, into a church in honour of the martyrs. This is now the new church the Pope opened. 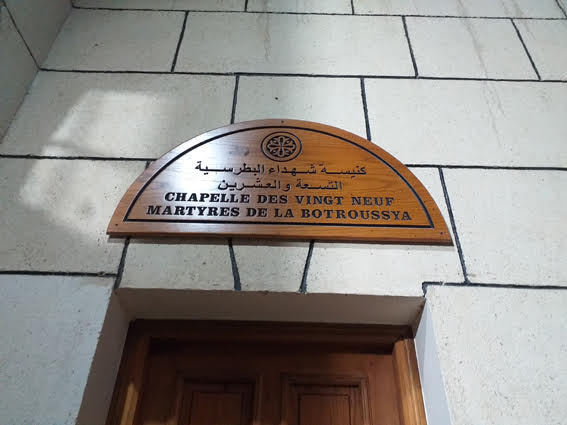 “Because it has two doors; one opens to the Cathedral grounds and the other to Boutrossiya, the new church is always open and accessible to visitors.”

According to Mr M. Boutros-Ghali, the new church can accommodate 25 to 30 worshippers. It was fitted with a new wooden roof and white marble floor. The altar is to the east, its floor covered with red carpeting. A shrine including a marble plaque inscribed with the names of the 29 martyrs in Arabic and English was set up in a room adjacent to the altar. 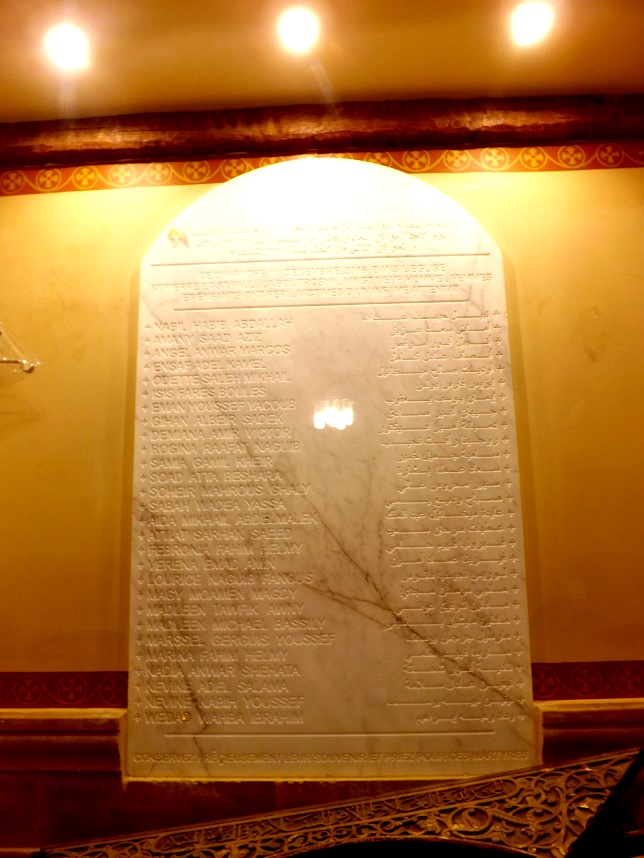 “A few days following the bombing,” Mr M. Boutros-Ghali said, “we were trying to replace the damaged marble tiles of the floor of Boutrossiya with new ones. As we lifted a tile, we found under it blood from the martyrs. We were astounded to find it fluid; it had not clotted or changed colour. We took that blood and put it in the new church for visitors to see it.”

The bombing in Boutrossiya had caused much damage: part of the ceiling caved in, the glass of the windows was shattered, the iron-frame window nearest the explosion was wrenched out of its place and blown outside, the iconostasis and several icons were destroyed, as were the wooden pews. 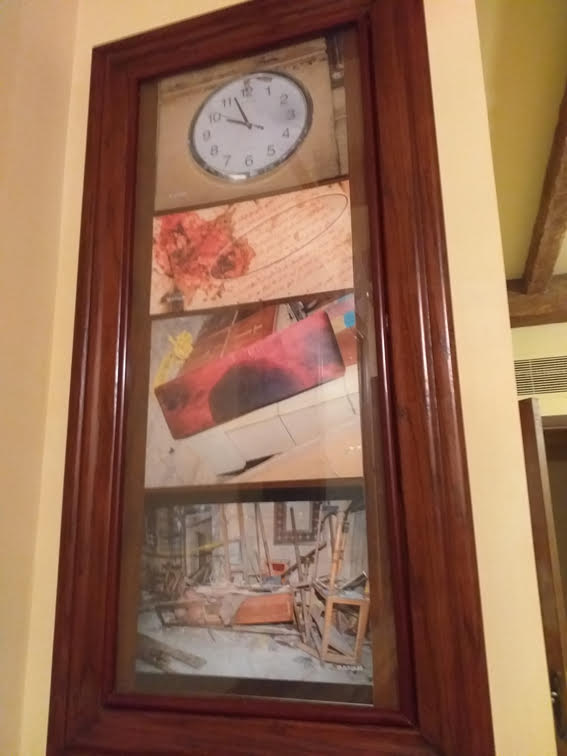 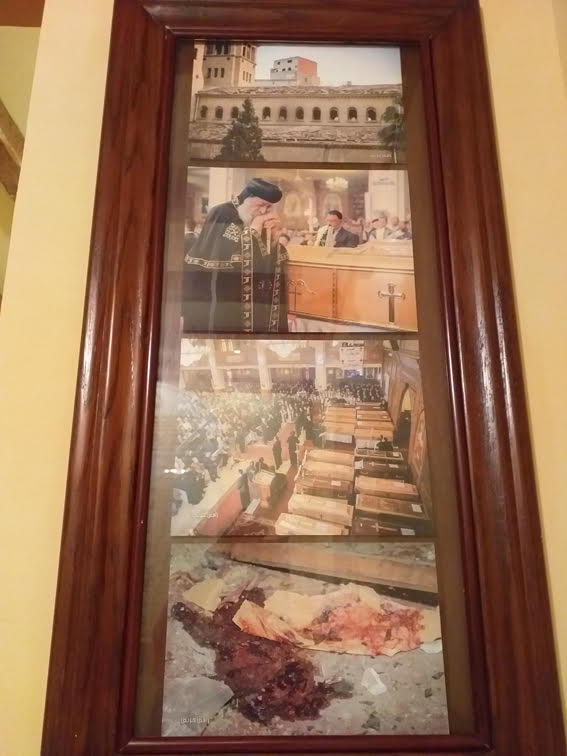 “We decided to exhibit the damaged parts in the new church,” Mr M. Boutros-Ghali told Watani. “We also put on display the church’s clock which had stopped at the time of the explosion (9:58AM); the processional Cross which was hit by a shrapnel; a piece of the main door of the church, which incurred severe damage; and a wooden panel carrying the document detailing the Boutrossiya bombing.”

Watani met artist and iconographer Ayman William who is a member of Bourtossiya congregation, and who painted the icons of the new church. “We adorned the ceiling of the new church with 29 stars symbolising the 29 martyrs,” William said. “Inside the sanctuary, we painted the icon of the Pantocrator surrounded by the Four Creatures of the Book of the Revelation: one with a lamb’s head, another with a lion’s head, the third with a human head, and the fourth with an eagle’s head. 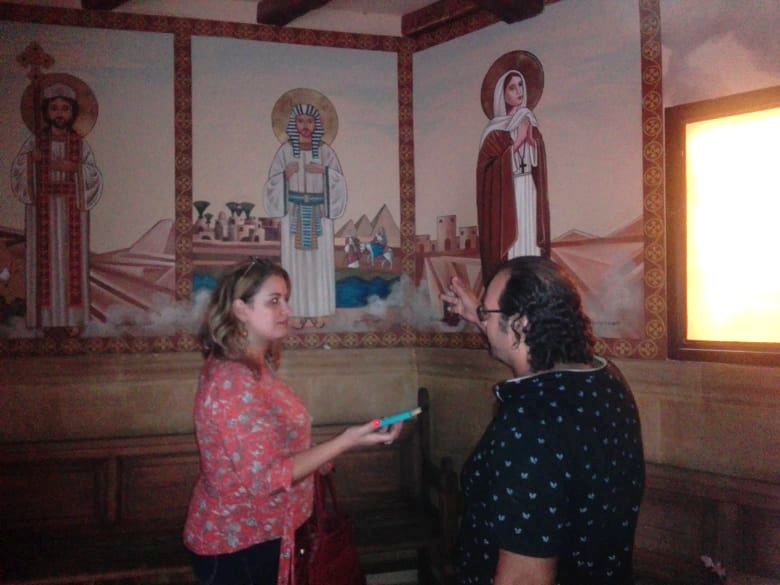 “The iconostasis carries on the right hand of the altar an icon of Jesus Christ holding the Gospel, and on the left an icon of the Holy Virgin holding Baby Jesus. We chose to place on the western and eastern walls of the new church icons of St Mark, in addition to little known martyrs including St Wadamoun of Armant in Upper Egypt and St Philomena. St Wadamoun is considered the first Egyptian martyr because tradition has it that he was martyred at the time of the Holy Family’s Flight into Egypt in the first century. Little is known about the life of St Philomena, except that she was a Greek princess who was martyred at the age of 13, in the early fourth century, on account of her Christian faith. There is also an icon of the Boutrossiya martyrs, each wearing a crown as an angel blows the trumpet to announce their arrival in Heaven, joining others who were martyred along the ages. The idea was to emphasise the relation between all martyrs, past and present.” 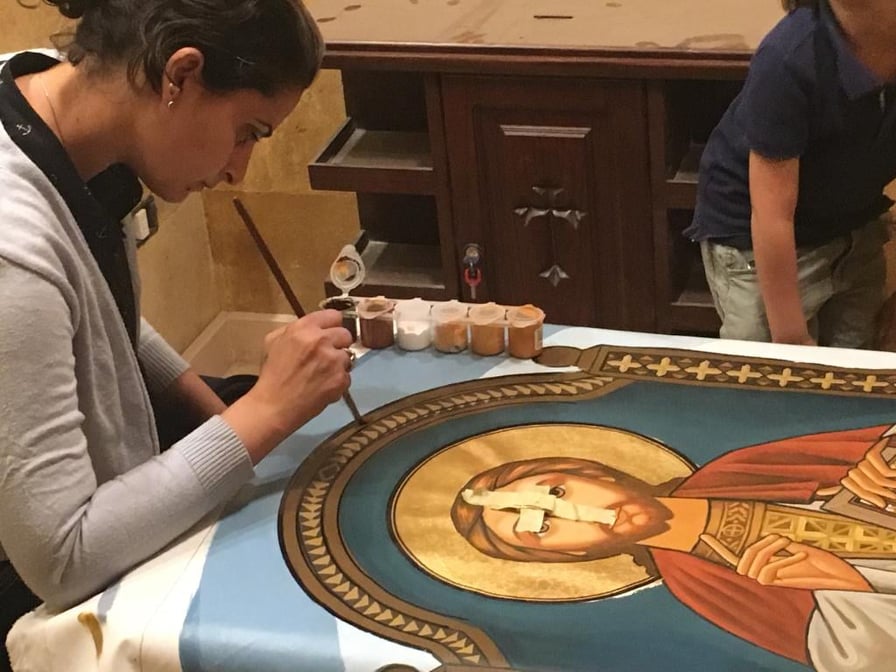 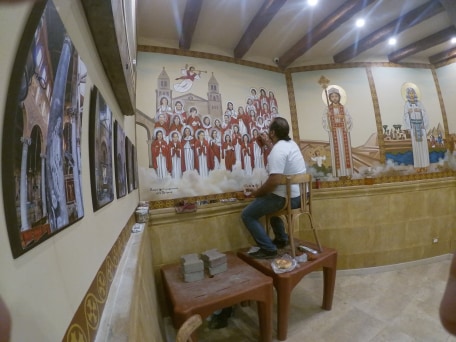 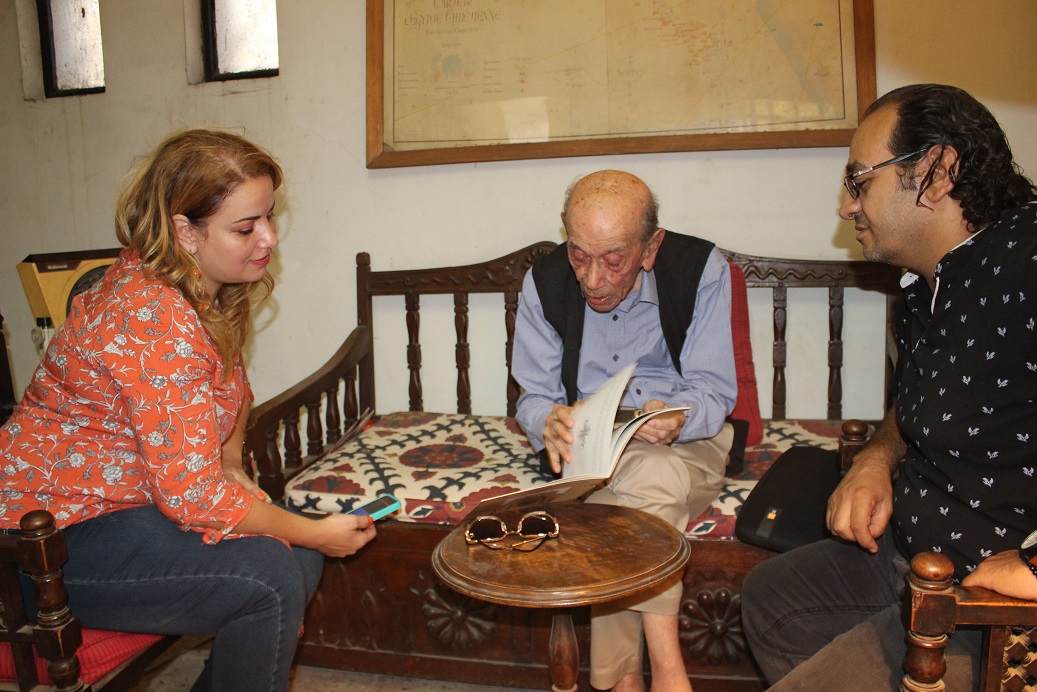