Cairo Criminal Court has handed two death sentences, two sentences of life in prison, four of hard prison, and one acquittal, to nine of 11 men charged with killing eight Copts and a policeman in Helwan on 29 December 2017. In a previous session last month, April 2019, two others among those charged were sentenced to death.

The court referred to the State Mufti the papers of those who were sentenced to death, for approval of the sentence. The Mufti is a Muslim cleric in charge of issuing fatwa (Islamic legal opinion) and the State Mufti is a high-ranking Islamic scholar who undertakes that task. The Mufti’s approval is a legal precondition for a death sentence in Egypt to become final.

On 29 December 2017, two gunmen had opened fire at the church of Mar-Mina in Helwan, while the congregation was attending Mass inside. The police security guards stationed outside the church exchanged fire with them; one security guard, a Muslim, as well as one gunman fell dead. The other gunman tried to flee through a side street but was caught by the other security guards. The church guards hastened to shut the gates of the church, and thus protected the congregation inside. But right outside the church, six Copts were killed. On their way to the church, the two gunmen had attacked a Coptic-owned shop that sold home appliances, and killed two Coptic brothers who worked there.

Eleven men were charged with the killings and, in December 2018, referred to criminal court by Egypt’s Prosecutor-General Nabil Ahmad Sadeq. The eleven are aged between 30 and 58 and comprise labourers, agriculture peasants, technicians, businessmen, teachers, and traders.

The charges against them covered terror activities from 2016 to March 2018, and included the premeditated murder of eight Egyptian citizens for their being Christian, also a policeman; intended murder; robbery; unlicensed procuring and carrying arms; founding and leading a terror organisation that aims at halting the application of the Constitution and law; prohibiting State institutions and public authorities from executing their jobs; assaulting the personal freedom of citizens; and harming national unity and social peace through embracing the thought of Daesh also known as the Islamic State IS. 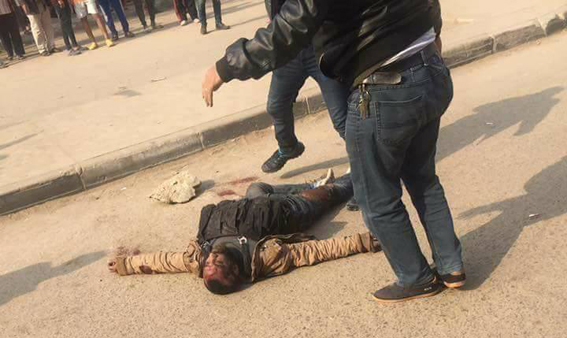