In Minya: Yet another attack … yet another church closed

Last week was a painful one for Copts, more so because it came on the footsteps of Christmas joy—Copts celebrate Christmas on 7 January. And this year’s Christmas was a very special one, since it witnessed the official opening by President Abdel-Fattah al-Sisi of the Cathedral of the Nativity of Christ alongside that of the Mosque of al-Fattah al-Aleem, an event unprecedented in Egypt. The two places of worship for Christians and Muslims are the largest of their kind in the Middle East.
So it was with pain and anger that, a few days after Christmas, Copts woke to the news that yet another attack had taken place against Coptic villagers in Minya, leading to closure of their church.

Friday, after noon prayers
In the wake of the attack against the Coptic villagers of Manshiyet Zaafarana in Minya, some 250km south of Cairo, by the village Muslim, the police closed down the only church in the village which is home to some 1,000 Copts.
The Bishopric of Minya and Abu-Qurqas headed by Bishop-General Anba Macarius, issued a statement on the matter, under the title: Explanation regarding the problem at the church of Mar-Girgis (St George) at Manshiyet Zaafarana. The statement said that Christmas Eve Midnight Mass had been celebrated in the village at a small building in Manshiyet Zaafarana owned by Minya and Abu-Qurqas Diocese and used for worship. A few hours after Mass concluded, a number of Muslim villagers broke into the de-facto church, but were evicted by the police guards stationed at the church. Sensing the rampant hostility among the Muslim villagers however, two priests and a few Copts remained in the church since they suspected a subsequent attack. As though prophetically, the attack did occur on Friday 11 January at 1:30pm, but the church remained intact and those inside stood their ground.
The timing of the attack was not unusual; the hour coincides with the termination of the Muslim Friday noon prayers. With the majority of the village Muslims at the mosque, it is easy for the fundamentalists among them to rally for an attack against Copts by harping on extremist religious sentiments that perceive churches as non-desirable in Islamic communities. So it has become common practice for most attacks against Copts to be waged on Fridays, following noon prayers.

The hate and humiliation
According to the Minya Bishopric statement, Friday 11 January saw a mob of around 1,000 Muslim villagers converge on the church, demanding that it should be closed. The police arrived and attempted to pacify the mob by promising them their demands would be met. They evicted the two priests and the few members of the congregation who had been inside, and shuttered the building. The statement said this action brought on an elated response from a jubilating, gloating mob that shrieked obscenities at the priests as the police forced them out. This show of force and the public hate and humiliation was what most roiled the Copts. Video shots of the incident went viral on social media; Coptic comments to them were bitter and full of wrath. 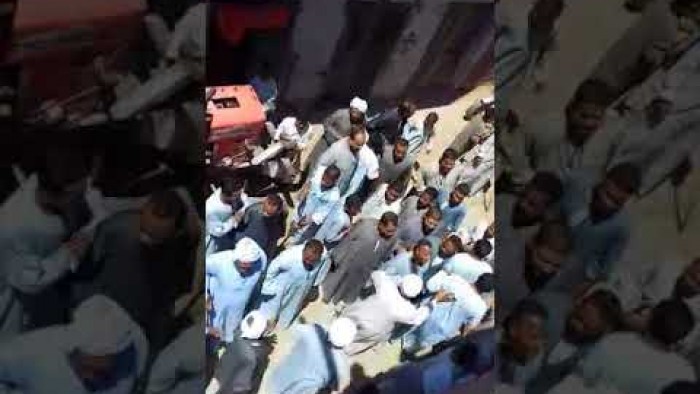 Appeasing the fundamentalists
“This is not the first time a place used for worship by Copts in Minya is closed,” the Bishopric statement said. “The common factor among all closures, however, is that they were done to appease fundamentalists and extremists, to the detriment of the Copts. It appears to indicate that extremists now hold the upper hand, and appeasing them is the easy way out of problems.
“This comes in the wake of declarations by the Grand Imam of al-Azhar, Sheikh Ahmad al-Tayyeb in favour of churches, also positive talk and actions by President Abdel-Fattah a-Sisi that every Egyptian has the right to practise his or her religion of choice, and to Pope Tawadros’s huge efforts to preserve national unity.”
No action has yet been taken against the perpetrators and offenders in Manshiyet Zaafarana, even though their actions were no secret and they are known to everyone in the village, the statement said. “As long as there is no deterrent action,” said the statement, “others will be encouraged to behave in the same manner [and get away with it]”.
Watani reported on previous incidents of church closures, among them one in the village of Sultan Basha in Minya last July and August:

Legal complaint against Minya Governor and Security Chief
Last Monday, five Coptic lawyers filed a legal complaint with the Prosecutor-General against Minya Governor and Security Chief. The lawyers: Nabil Azmy, Amgad Murad, Ramsis al-Naggar, Atef Nazmy, and Hany Ramsis claimed in their complaint that the Manshiyet Zaafarana incident is among those that threaten social peace and create a mental image of Copts in Egypt living under dire conditions. This plays into the hands of the enemies of the nation, the complaint said, presenting them with the opportunity to mock the President and his serious attempts to establish full citizenship rights and peaceful coexistence among the country’s Muslims and Copts. This in turn gives foreign countries the chance to interfere in Egypt’s internal affairs, an objective which the Muslim Brothers, terrorists, and all enemies of the nation have attempted time and again, and failed.
“From the horrendous reports and video shots of the Manshiyet Zaafarana incident, that have gone viral on social media, it is obvious that there are serious security flaws in all State apparatuses, but specifically with Minya Governor and Minya Security Chief who together are responsible for the safety of Minya citizens. Manshiyet Zaafarana incident started under the eyes and noses of Minya officials and police on Coptic Christmas Eve,” the complaint said.
“That same evening, President Sisi, Pope Tawadros, and Grand Imam of al-Azhar Sheikh Ahmad al-Tayyeb joined in a historic act: they simultaneously opened al-Fattah al-Aleem Mosque and the Cathedral of the Nativity of the Christ in the New Administrative Capital. But the criminal terroristic events by the enemies of the nation in Minya appeared to mock the great national endeavour by the President, and work to shatter the stability of the nation.
“The objectives, intentions, and plans of extremist groups are no secret to the security authorities who are all too well aware of their moves. Yet security officials have treated the matter with notorious laxity and procrastination, and have never aborted extremist schemes nor caught the criminals. This gave the green light to extremists, saboteurs, and thugs to commit their crimes against Copts; they had tested the security authority and found it neutral.”
The complaint concluded by demanding of the Prosecutor-General to take legal action against Minya Governor and Security Chief, as well as all who took part in the Manshiyet Zaafarana attack.

Cabinet denies closure of churches
Tuesday 15 January came with news that further roiled Copts. In its periodical statement commenting on the veracity of news circulated in the media, Egypt’s Cabinet denied that any churches in Minya had been closed by security authorities.
The statement said the Cabinet had contacted the Minya governorate “to verify news that three churches in Minya had been closed indefinitely by the police in order to appease [Islamic] demonstrators, but the governorate’s reply was that such news was absolutely untrue. He said such talk was no more than rumours that worked to ignite sectarian tensions and divisions”.
The denial outraged Copts. Lawyer Hany Ramsis, one of the five lawyers who had filed the legal complaint against Minya Governor and Security Chief, said that Minya Governor has added yet another offence to his ignoble score, and ought to be held legally accountable for deluding the Cabinet with false information. Mr Ramsis reminded that only a day earlier the priests of Samalout, Minya, had sent a letter to the Interior Minister requesting an audience to explain to him the plight of Copts and the hardship they encounter in exercising their right to worship. The letter listed six Samalout churches that were, and still are, closed by the police under the pretext that opening them would constitute a security hazard. The location of each church was specified, together with the date it was closed. “This was written in an official letter to Interior Minister Mahmoud Tawfiq,” Mr Ramsis said. “So how can Minya Governor, Qassem Hussein claim there are no closed churches in Minya?”
Until Watani went to press, there was no official rectification.