It was Friday, weekend in Egypt. It was 26 May; children in primary and preparatory schools were done with their finals and already on summer holiday. For Copts, it was the Friday that followed Ascension Day and lay within the 50 days of rejoicing after Resurrection Day. It was the perfect day for a spiritual outing.
Churches throughout Egypt are used to treating their congregations to trips to monasteries or convents during holidays. Such trips serve the double purpose of nurturing spirituality and spending a good time in the outdoors. The congregation is usually very eager to join; for some it is the only outing they can afford. A trip may include anyone wishing to join or, in many cases, may be specifically arranged for separate sectors of the congregation such as volunteer workers, Sunday school teachers, young men and women, families, or schoolchildren. Or it may be a private trip arranged by family and friends who decide to board a bus and take a trip on their own.
The Copts in Beni Sweif and Minya, two regions that lie some 100km and 250km south of Cairo respectively; are no exception. Those in charge of or who wish to take trips should have no hard time looking for destinations; the region is home to a number of monasteries and convents. 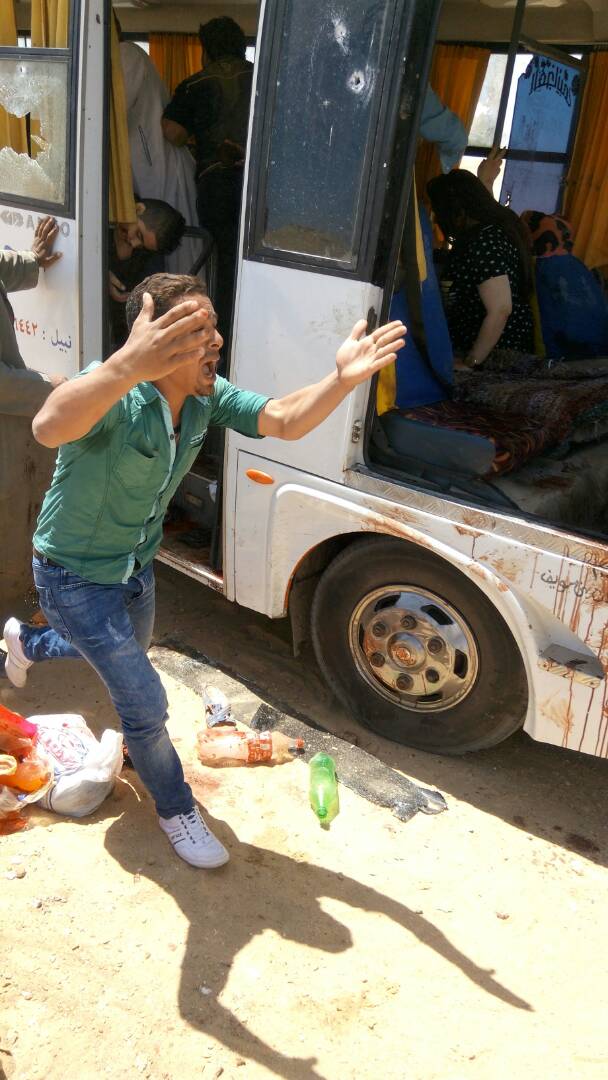 Bodies strewn in the desert
That fateful Friday 26 May, the church of the Holy Virgin in Beni Mazar, Minya arranged a trip for its children; and an extended family from the village of Ezbet Hanna in al-Fashn, Beni Sweif, arranged one. The Ezbet Hanna family and their friends boarded a bus, and the Minya children a microbus; both headed to the same spot: the monastery of Anba Samueel al-Muetarrif, St Samuel the Confessor, in the Western Desert some 200km southwest Cairo. Incidentally, seven labourers from the village of Deir al-Garnous (pronounced Deir al-Jarnous) in Maghagha, Minya boarded a pickup truck and headed to the same destination, and three others from Abu-Qurqas, in Minya, boarded another truck. Preliminary reports had cited their number as 16, but it was later known that the correct figure was seven.
My phone rang at around 9am that Friday morning; the man on the other end informed me in a shocked, pained voice that Copts had been shot to death close to St Samuel’s. I shuddered; “Please God, don’t let it be true!” and quickly called the monastery. The monk who answered me confirmed the dreadful news.
I rushed to the monastery site, but it took me some two hours to get there. The scene that met me was horrifying: bodies strewn on the hot desert sand with blood all around, an incredible amount of blood. Injured women with blood covering their clothes wailed, as men who had come to aid the survivors and move the bodies attempted to do whatever they could.
Eyewitnesses to the shooting spoke of gruesome details. 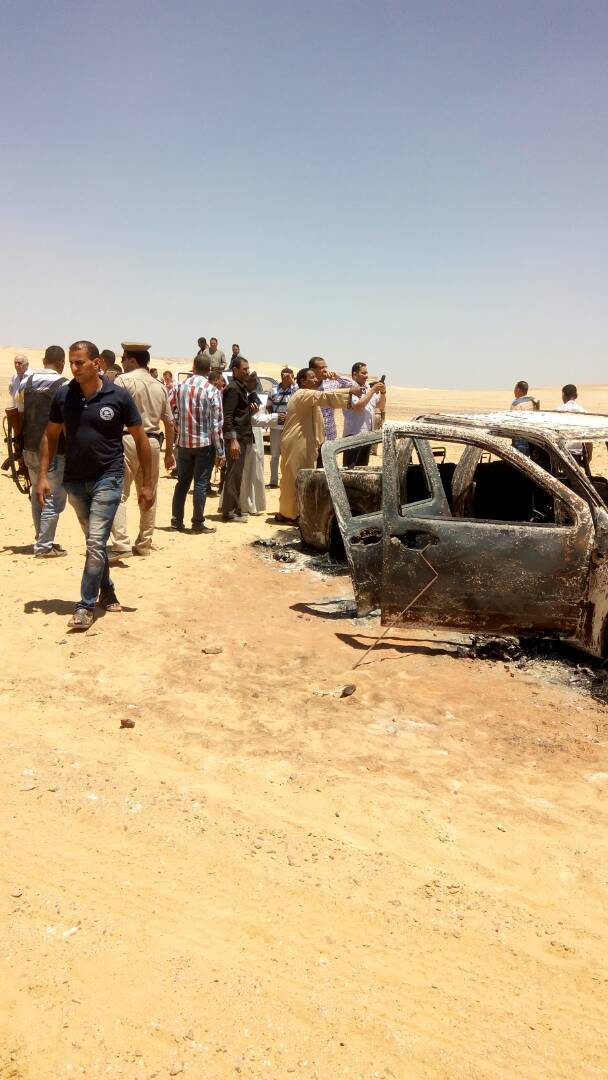 Deny Christ or die
It was not yet 9am when the bus from Ezbet Hanna embarked on the last leg of the journey to the monastery of St Samuel the Confessor, an unpaved desert path that stretches some 17km. The 30 passengers were singing the joyful hymns and praises they traditionally break into once they approach a monastery or holy place. The bus had barely crossed two kilometres of the unpaved road when a group of some 12 masked men in four-wheel-drive vehicles descended from the nearby Abu-Tartour plateau and forced the bus to stop. With their automatic arms they opened fire on the bus, smashing the windows. The driver had to stop.
The terrorists forced the men to disembark while the women remained on the bus. All were asked to hand over their money, mobile phones and any golden articles they were wearing. The men were given the choice to deny Christ or die. When they insisted they were Christian, the terrorists shot them all, in the head or chest. They then randomly shot at the women and children on the bus.
While this slaughter was taking place, the pickup truck from Maghagha approached on the lonely path. Right behind came the microbus from Beni Mazar carrying children and a number of adults accompanying them. The truck from Abu-Qurqas followed. Again, the passengers on all three incoming vehicles were asked to deny their Christianity; when they refused they were shot. All the men died, as well as 10 children; only three children survived. 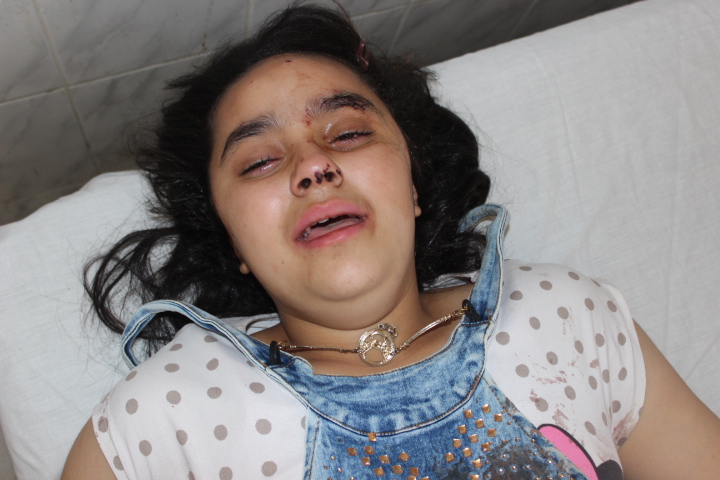 The bloodshed
The terrorists rushed to collect the passengers’ belongings and flee. In the microbus, they left booklets titled with: “A fast accepted [by Allah], and all sins forgiven”. The phrase is a famous quote used by Muslims during their holy month of Ramadan, the month of fasting, which was to begin the following day. If anyone had doubts about their identity, it was now definite that the masked men were Islamists. The following day, Daesh—also known as ISIL and ISIS—proudly claimed responsibility for the massacre and, predictably, promised more and worse to come.
The masked men ran back to their four-wheel drive vehicles to flee the area. One of their vehicles got stuck in the sand; they left it there and set it on fire.
As the bodies lay on the sand, and the injured cried for help, a private car carrying visitors to the monastery drove by. The sight that met the passengers was gruesome. They realised that there was not much they could do, so they hastened to the monastery to seek help. The monks quickly called the police and ambulance. Ambulances arrived and started to swiftly to move the injured, who numbered 25, to hospitals in Minya, Beni Sweif, and Cairo.
The police appeared not to believe the complaint and only arrived at the scene more than two hours later. They began combing the area for clues to lead to the terrorists. Interior Minister Magdy Abdel-Ghaffar arrived at 3pm. 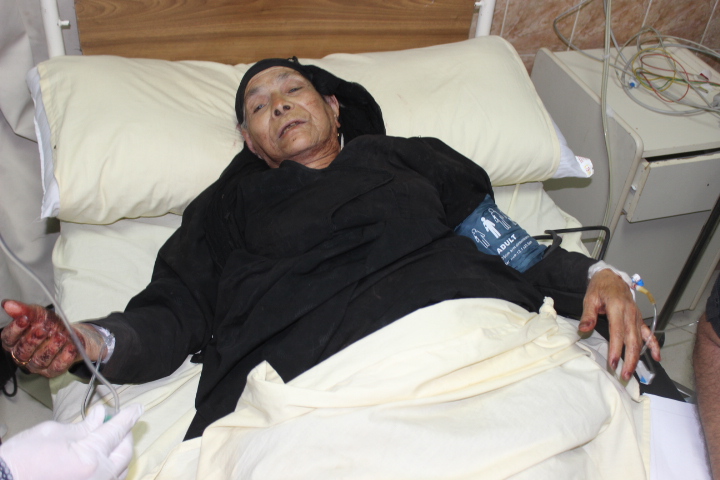 Falsified death certificates
I had one last look before I left; it was heart-wrenching. The bus interiors were coated with blood; the bags left behind and the few belongings that remained were all blood-red.
Altogether, 28 men, women, and children had lost their lives; and 25 were injured. In front of al-Edwa Hospital in Minya where a number of the injured were moved, Copts demonstrated protesting in anger.
The seriously injured were moved to Cairo. In two cases, the Health Minister, himself a surgeon, conducted the surgery.
The journey of burying the dead had a nasty start, with the Copts complaining of maltreatment by Health Ministry staff who obviously had Islamist leanings. In one case, the health officials at al-Edwa Hospital issued death certificates that cited ‘shock’ as reason for death even though the after-death report declared the reason as injuries owing to firearm shots. Anba Aghathon, Bishop of Samalout, expressed his anger at such ‘falsification’, and the Health Ministry referred the staff members responsible for this to legal questioning.
Funerals were held for the martyrs and they were buried in collective graves in their separate hometowns or villages. 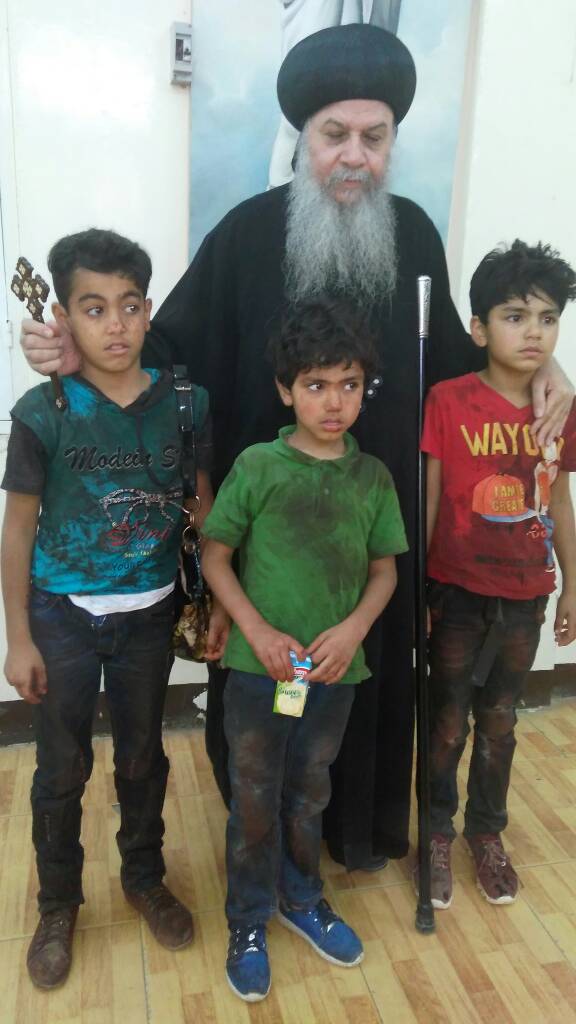 Egypt strikes terrorist camps
Friday evening President Sisi addressed the nation. He offered his condolences, and announced that Egyptian warplanes had and will continue to strike Daesh sites in Libya where the Islamist terrorists had trained and continue to do so. These sites in Derna and Jafra include leadership headquarters as well as training camps and weapons storage facilities.
On Monday 29 May, Interior Minister Abdel-Ghaffar moved Minya Security chief Major General Faisal Dweidar form his position and replaced him with Major General Mamdouh Abdel-Munsef. It was said that this was because of security shortcoming in Minya which facilitated the attack against the Copts’ vehicles on their way to St Samuel’s on 26 May.
Pope Tawadros sent messages of comfort to the families of the victims and delegated high-ranking Church officials to visit the injured in hospital.
Both President and Pope insisted that the massacre of the Copts was intended to divide the ranks of the nation, and pit Egypt’s Copts against their Muslim fellow citizens. This is something Egyptians must never allow, they said.
Condolences poured in from inside and outside Egypt. Pope Francis prayed for Egypt and its Copts, as well as the Church and Pope Tawadros. Tour Eiffel lights were turned off in mourning, and a number of landmarks across the world were lit in the colours of Egypt’s flag, in a show of support and sympathy. 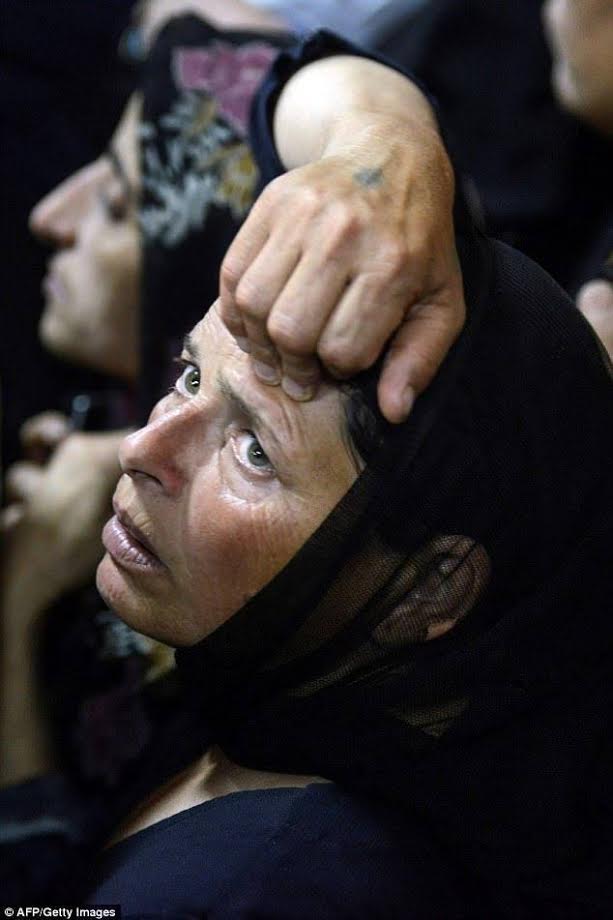 What kind of faith is that?
Social media, for all it is worth, lived up to its role as an open forum. The Copts circulated video footage of short interviews with the survivors, and messages that ranged from expressions of profound faith to outbursts of wrath directed at the Church and the State for allegedly failing to protect Copts. They said the government fell short of catching the Islamists, putting them on trial, and executing them. Never mind human rights, they said, the crimes were all-too-obvious. Other than that, they insisted, the State was not defending Copts.
A few bloggers insisted that we should see the incident as an attempt to strike Egypt, and should strongly resist that.
An injured woman, who had been on the children’s bus, related on video how the masked men boarded the bus and asked: Are you Christian? “We said: ‘yes, we are Christian’. They asked for our money and gold ornaments; we handed them over. Then they asked us to say the Islamic testimony [“I testify that there is no god but Allah, and Muhammad is Allah’s Prophet”] but we would not deny our faith. They pressed the children to recite it, but the children broke into a recital of the Lord’s Prayer instead. That was when they opened fire.”
It was the faith of the children that stunned most people. “Who gave you such strength?” bloggers asked the children’s souls. “How were you able to look death in the face without fear? What kind of faith is that?” 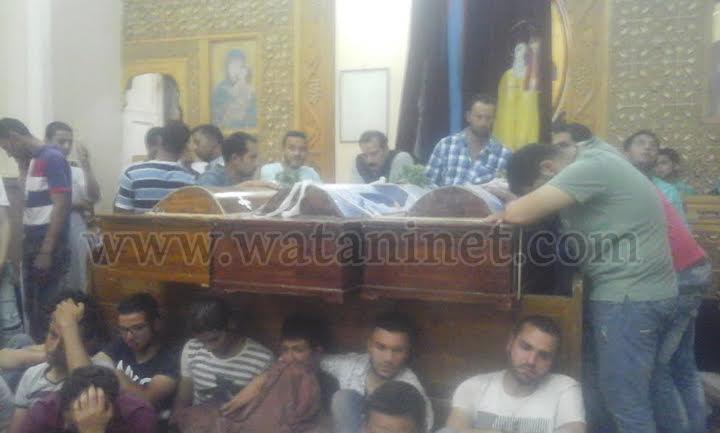