The village of Sultan Basha in Minya, some 250km south of Cairo, was the scene of three days of demonstrations by the Muslim villagers against the expected legalisation of the Anba Karass church in the village. The demonstrations started after Friday noon prayers on 6 July, with the protesters crying: “Never a church in our midst”. The flagrant hostility terrorised the Coptic villagers and drove them to lock themselves in their homes to avoid any violence against them. The local police merely looked on, so the demonstrators conducted protests again the following day 7 July; and again these went on with no police intervention.

Apparently encouraged by the police’s tacit acceptance of the demonstrations, the Muslim villagers waged another protest the following Friday, 13 July. This time, however, a local police official, who might have desired to put an end to the demonstrations, told the protestors that no church would be allowed in Sultan Basha. This declaration brought on a flurry of joyful cheers and ululations, and the crowd dispersed.

The following day, a statement was issued by Anba Macarius, Bishop of Minya and Abu-Qurqas, in which he cited the details of the Sultan Basha events and roundly denounced the police official’s promise of no church in the village.

“We are saddened by official appeasement of and acquiescence to demands by some who posses no right to such demands [the demands to have no church in the village], to the detriment of Coptic rights.

“We live in a sovereign State governed by Constitution, laws, and institutions; and thus reject that anyone should willfully impose over us a situation that defies the law. We are confident that honourable officials in position of authority in this country—with whom we have already been in contact—share our stance in absolutely rejecting the unlawful acts and declarations against us. They have promised to deal firmly with the situation and perpetrators, so that similar incidents do not recur.”

The hostility of Muslim hardliners against the legalisation of de facto unlicensed churches has been an ongoing movement since a law was passed in 2016 making provisions for such legalisation. Watani has repeatedly reported on a number of such incidents in villages in the southern governorates of Aswan, Qena, Sohag, Minya, and Beni Sweif; as well as the West Delta governorate of Beheira.

In March 2018, a Cabinet committee approved the legalisation of 53 churches and church-affiliated buildings in six parishes, out of a total 3730 that had applied for legalisation; in April 2018, another batch of 166 churches were approved. In many case, this provoked the ire of hardline Muslims who rose to forcibly defy the law. Officials have invariably stressed that the law would be enforced. 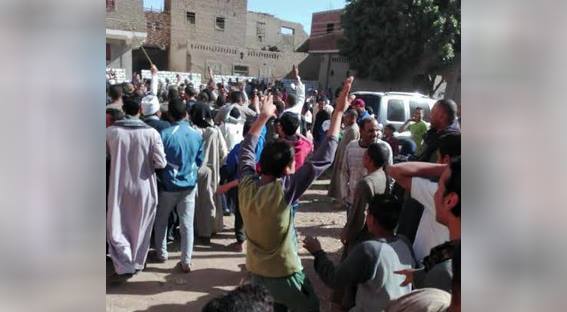