The week began on a dire note.
Even before the preceding weekend started, weekend in Egypt is Friday / Saturday, on Thursday 13 July Churches in Egypt announced they had cancelled their summer activities: mainly trips to monasteries or holy sites, spiritual retreats or conventions and, especially in underprivileged areas, trips to beaches. The cancellation came in response to a warning by the Interior Ministry of anticipated terrorist attacks against Copts.

Cancelling summer activities
The Interior Ministry sent letters to the various Churches in Egypt explaining that intelligence sources revealed that [Islamist] terrorist movements were planning to carry out violent attacks nationwide against the military, police, and Copts and their churches.
The ministry asked the Churches to take all precautionary measures during the coming three weeks and until further notice. All trips and activities that involved any type of gathering, the Ministry said, should be put off or cancelled.
Interior Minister, General Magdy Abdel-Ghaffar, said that security would be intensified on all public buildings, including churches and monasteries, nationwide. He said operations rooms would be set up in churches to follow on the security situation round the clock, and that security men would be aided by military men and provided with all the resources they may need, such as weapons, equipment, armoured vehicles, police dogs and modern surveillance cameras.
The heads of the three main Churches in Egypt promptly responded to the Interior Ministry’s warning, and cancelled all summer activities. Despite the fact that summer trips and conventions provide for the congregation an invaluable outlet that combines spirituality and holidaymaking—in the poorer districts they are the only opportunity for underprivileged, heavily burdened congregations holidaying to spend time relaxing and enjoying themselves while well taken care of by their church leaders—those in charge in the Churches realised that no risks could be taken.
Sources close to Coptic Orthodox Pope Tawadros said that the Church values the role played by security and military authorities to battle terrorism, and had thus cancelled all trips and conventions so as to in no way confuse security endeavors on the terrorism front.
The same decision and sentiments were expressed by spokesmen of the Catholic and Evangelical Churches in Egypt. 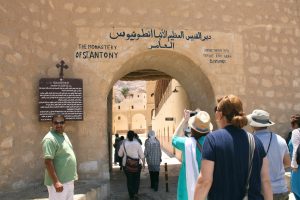 Repeated attacks
The terrorist threat against Copts was nothing new and was not to be toyed with.
An Islamist suicide bomber last December blew himself up during Sunday Mass at the Cairo church of al-Boutrossiya which is adjacent to St Mark’s Cathedral in Abbassiya, the papal headquarters. Two other bombers targeted Mar-Girgis (St George) church in the mid-Delta capital city of Tanta, and St Mark’s cathedral in Alexandria. The twin suicide bombings were conducted on 9 April which coincided with Palm Sunday. Altogether, more than 70 Copts were killed in the three bombings.

Last May, terrorists intercepted buses heading to the Western Desert monastery of St Samuel the Confessor and killed 28 Copts among them 10 children.

Security authorities identified the Boutrossiya suicide bomber and the terrorist cell to which he belonged, and arrested the members of this cell. Authorities also identified the perpetrators of the twin bombings, arrested a number of them, and are still chasing others who are in hiding.
In case of the attack against the busloads of Copts heading to St Samuel’s, the terrorists had crossed the Western Desert from the Libyan border where they had trained in camps there. The Egyptian Air Force retaliated by a number of sorties over several days, striking the camps and ammunition and arms depots.
The Islamic terrorist group Daesh, also known as Islamic State or IS, has repeatedly threatened Copts, terming them their favourite prey. Last February, they targeted individual Copts in their homes and on the streets in the North Sinai town of al-Arish, killing seven Copts in six weeks. Arish Copts were forced to leave their hometown and relocate elsewhere in Egypt.

Church guard stabbed in neck
On Saturday 15 July a church guard in Alexandria was stabbed in the neck by a young man who attempted to enter the church and was stopped by the guard.
Mina Fouad Zakhary, 47, was standing guard at the gate of the church of St Mark and St Peter the Last of the Martyrs, known in short as the church of the Saints, in Sidi Bishr, Alexandria, during the early afternoon hours. A young man carrying a laptop computer in a handbag, a mobile phone, and with headphones on his ears, attempted to force his way through the gate. Mr Zakhary stopped him, asking: “Where are you going to? Show your ID card, please.” The young man tried to evade the metal detector and bypass it into into the church gate, but Mr Zakhary shouted at him and again asked for his ID. At that point, the young man put his hand into the bag he was carrying and, instead of coming up with his ID, brought out a shaving blade and attacked Mr Zakhary, stabbing him in the neck.
Other guardsmen who were close by in the church courtyard and who had been alerted by Mr Zakhary’s shouts hurried to the rescue. They pulled away the young man who was by then holding tight to Mr Zakhary, caught him and promptly handed him over to the police. 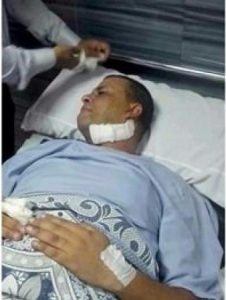 Aspiring for Paradise
Mr Zakhary was rushed to St Mark’s Hospital where it was found that the wound was not deep; it was stitched. His condition improved and, early morning on Monday 17 July, he was released from hospital.
While in hospital, Mr Zakhary received a visit from Alexandria Governor Muhammad Sultan, and a phone call from Alexandria Security Chief Major General Mustafa al-Nimr. He also received visits from Bishop-General Anba Pavli and Fr Rweiss Morqos on behalf of Pope Tawadros, as well as from numerous members of the clergy and the congregation. Coptic social media brimmed with good wishes for him and prayers for a speedy recovery.
The culprit was led to the nearest police station. His identity was revealed as 24-year-old Abdullah Adel Ahmed Hassan, a law school graduate, and unemployed. When asked why he stabbed Mr Zakhary, he said: “I defend my religion.” He said he wished to “go to Paradise” by attacking the church guard. The police said that he had been listening to Qur’anic verses when he was caught. Mr Hassan is in police custody, and investigations are ongoing.
The church pastors, Fr Maqar Fawzy and Fr Matta’os Sabry, told Watani that the stabbing incident occurred at a time during the day when the little children in the pre-school nursery of the church were preparing to go home, and a group of young men and women were holding a spiritual gathering. But the stabbing was far away from both activities, they said. Church services and rituals went along during their normal hours and schedules, they confirmed. 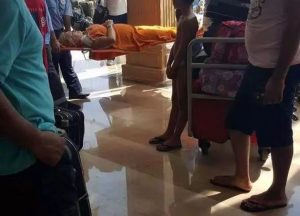 Women tourists stabbed
The week witnessed six other stabbings; tragically, two of the victims were killed. This time, the stabbing casualties were not Copts, but were female tourists in the Red Sea resort of Hurghada.
The 29-year-old university graduate Abdel-Rahman Shaaban sat with two female German tourists and spoke with them in fluent German then suddenly produced a kitchen knife and repeatedly stabbed them. Leaving them for dead he fled the scene, chased by security guards and hotel workers, and rushed into another hotel next door. There he attacked and wounded four other female tourists: two Armenians, one Ukranian, and one from the Czech Republic. He stabbed them in the face, neck and feet. The four women have been hospitalised, but the two Germans died.
Mr Shaaban was finally caught by his pursuers and handed over to the police. Investigations are ongoing. Until Watani went to press, it had not been revealed what convictions or ideologies he embraced. Neither had any movement declared responsibility for the attack. Security sources say that Mr Shaaban, who comes from the North Delta region of Kafr al-Sheikh, is a graduate of the business school of the local branch of al-Azhar University, the foremost Sunni Islamic institution in the world.
Tourism Minister Yehia Rashed, accompanied by Health Minister Ahmed Emad al-Din, have visited the injured in hospital, accompanied by MP Sahar Talaat Mustafa, head of the tourism special committee in parliament.

Dismayed and distressed
A statement by the German Foreign Ministry said: “According to everything that we know, this act was aimed at foreign tourists, a particularly perfidious and criminal act that leaves us sad, dismayed, and angry.” Local German media said the two women were not tourists but were residents of Hurghada.
The stabbing leaves Egyptians distressed. Local culture in Egypt holds it that guests are the special responsibility of their hosts; in this Egyptians feel they have gone terribly amiss. Equally important is the fact that all indicators point at extremist Islamist thought as the culprit behind the crime. This puts Egyptians, the majority of whom are Muslim, in the awkward position of having to defend Islam against the terrorist image propagated by Islamist.
Additionally, the stabbing threatens to decimate the tourist industry which had throughout the past few months, barely started picking up from the doldrums it had fallen into in the wake of the 2011 Arab Spring uprising and the turmoil that followed. Tourism is the backbone of the Egyptian economy, and it was hoped that Egypt could achieve better growth once the tourism industry picked up. Even though Germany stopped short of issuing warnings on travel to Egypt, it still remains to be seen how tourism as a whole suffers. So far, the flow of planes carrying tourists into Egypt has continued uninterrupted; Egyptians hope it would remain so.