Egypt has declared concerns over plans by the National Museum of Scotland to display at Edinburgh starting 9 February what the museum claims to be a stone from the casing of the Great Pyramid at Giza. On its Facebook page, the Egyptian Ministry of Antiquities posted a request it had sent, through Egypt’s Foreign Ministry, to the National Museum of Scotland requesting access to certification documents for all Egyptian antiquities at the museum, to ensure they had left Egypt in a legal manner.

If any piece of antiquity was taken out of Egypt illegally, said Shaaban Abdel-Gawad, head of the repatriation department at the Ministry of Antiquities, it must be returned to Egypt.

The National Museum said its curators are confident that they have legal title to the stone, which was removed from Egypt by an engineer working for Scotland’s astronomer royal in 1872. Mr Abdel Gawad said: “We’re still waiting for them to send us the papers. We can’t say if anything is illegal or legal until we see the documents. Every documentation process is different, and every case is different.”

Egyptian law number 117 of 1983 bans the trade or export of antiquities, including those removed from Egypt prior to the law being in place.

The Great Pyramid of Giza was built as a burial place for for King Khufu back in around 2589–2566 BC. It is the oldest and largest of the three Giza pyramids. Once completed, the Great Pyramid was surfaced by white casing stones which were intricately cut, beautifully polished blocks of white limestone. In 1303AD, the limestone case got loose in the wake of an earthquake; its stones later fell off and were used by local rulers to build mosques and palaces.

The casing stone at the National Museum of Scotland was discovered in 1872 by the British engineer Waynman Dixon, who was working on behalf of the astronomer royal of Scotland, Charles Piazzi Smyth. Alongside his geologist wife, Jessie, Piazzi Smyth conducted the first largely accurate survey of the Great Pyramid seven years earlier, for which he is said to have gained the official permission of the viceroy of Egypt and the assistance of the Egyptian Antiquities Service.

Dixon reportedly uncovered the casing stone in a rubble heap following road building works, and transported it back to Scotland for Piazzi Smyth. 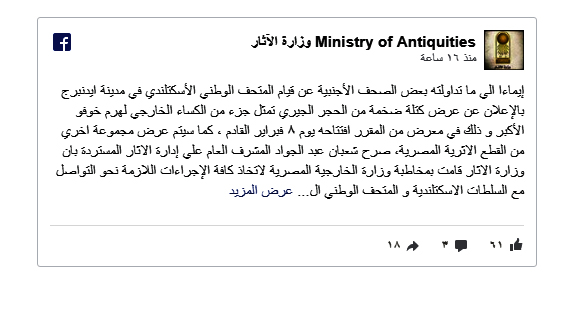