Roman-era mud brick ovens and a large mud brick wall from the Egyptian Late Period (712-323 BC) have been discovered at the Avenue of Sphinxes at Karnak temple in Luxor. The charred ovens are of circular shape.

The discovery was made by an Egyptian archaeological mission working on a project that started in 2017 to excavate the full avenue lined with ram-headed sphinxes and running between Karnak and Luxor Temple. The avenue was used for processional celebrations known as the Opet Festival.

According to Mustafa Waziri, Secretary-General of the Supreme Council of Antiquities, the discovery was made in the Luxor district of Nagaa Abu-Asaba. The ovens, Mr Waziri said, were possibly used to bake clay or faience, and the mud brick wall is 30 metres long, 2.5 metres high, and three metres wide. Another wall made of sandstone bricks was also unearthed, was part of the one that once safeguarded the eastern bank of the Nile from inundation by the annual flood, Mr Waziri said. 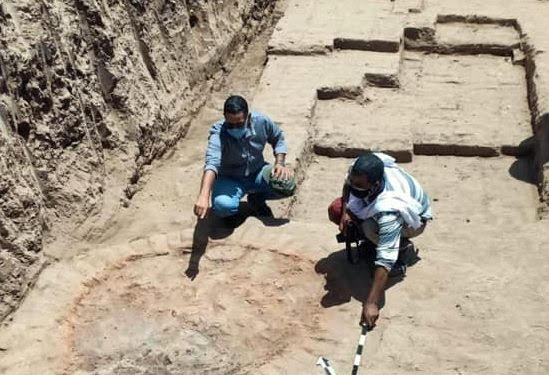 Al-Kebash avenue, the Avenue of the Rams or Avenue of the Sphinxes, was first discovered in March 1949 in the southern city of Luxor which today sits on the site of ancient Thebes, the capital of Egypt during the New Kingdom in 1570 – 1069 BC.

At 2,700 metres long and 76 metres wide, al-Kebash avenue is among the largest walkways of the ancient world. It was the processional route that linked Luxor Temple with the Temple of Mut at Karnak to the south, the ceremony reached its climax when the sacred boat of Amun-Ra was carried by 30 priests out of the Temple of Karnak and along the entire avenue of sphinxes to the to the Temple of Luxor.

The avenue and sphinxes were built during the New Kingdom (1550 – 1069 BC) and completed by Nectanebo I (380-363 BC) who ruled during the 30th Dynasty. Each of the some 1350 ram-headed or human-headed sphinxes are inscribed with his name.

69 years on discovery of avenue of rams in Luxor