A close look at the brotherhood

Muslim Brotherhood in Contemporary Egypt: Democracy Redefined or Confined? by Mariz Tadros, was published in May 2012 by Oxford: Routledge Press.

Mariz Tadros is a fellow at the Institute of Development Studies at Sussex University.
Dr Tadros spent three years as an assistant professor at the American University of Cairo, and has worked as a consultant for both local and international NGOs. She was a journalist for the Cairo State-owned Al-Ahram Weekly newspaper for almost 10 years, covering human rights, women’s rights, civil society organisations and activism, poverty and a plethora of development-related topics.
Islamic rules
The nine chapters of Tadros’s book attempt to offer an analysis of the thought of the Muslim Brotherhood (MB), especially now that one of them, Mohamed Mursi, is Egypt’s President.
The book looks into the MB’s position on key issues such as democracy, Islamic-style; gender issues; religious minorities; and political plurality; and takes a critical look at whether claims that the Brotherhood has abandoned extremism and should be engaged with as a moderate political force can be substantiated.
Watani talked to Dr Tadros about the views expressed in her book which is especially timely.
“In their address the MB today is using terms that have special appeal to the masses, such as ‘democracy’ and ‘civil State’, but insist they should all come with an ‘Islamic reference’. By this they mean that their reference point is Islamic jurisprudence. “But if the law is taken from Islamic jurisprudence,” Dr Tadros said, “it is a form of an Islamic State.”
Where to?
“Where is Egypt heading to now, as far as Islamism is concerned?” Watani asked.
“While we pretend to the outside world that we are taking Turkey as a role-model,” Dr Tadros said, “we are in effect going after a mix of the Iranian and Sudanese models. This is being very cunningly projected. The MB general address uses smart language that insinuates they are opening up on all fields, and announces acceptance of all kinds of difference. On the ground, however, Egyptians see none of that. Harassment of non-veiled women is encouraged while the ruling Freedom and Justice Party—the political arm of the MB—turns a blind eye to it. This alone sends a clear message to the masses that such harassment is acceptable to the MB.
“There is also the current curtailment of freedoms. On the political level, for instance, opposition to Islamism or the MB brings about an allegation of Islamophobia which implies prejudice against, hatred or irrational fear of Islam or Muslims. As though Islam were synonymous with the MB or political Islamism” This, according to Dr Tadros, is tantamount to intellectual terrorism.
On citizenship rights and Copts
As far as citizenship rights and Copts are concerned, Dr Tadros said the MB declared views on these issues are magnificent. But again, she said, matters on the ground give the lie to their talk. “Today we hear Nassara, the Islamic term used in the Qur’an to describe Christians; instead of the wider, more general ‘Christians’ or ‘Copts’ that had for ages been in use.
“The MB frequently quote the Prophet Mohamed’s words which say that ‘they [Christians and Jews] have the same rights as we [Muslims] do and are bound to the same duties’. But that hadith is taken out of context because it goes on to stipulate ‘when they believe in Islam’. This means the MB exploit part of the hadith to achieve a specific political purpose but, once they go back to their Islamic ‘jurisprudential’ reference, they will declare the hadith does not apply.
“The MB,” Dr Tadros said, “say they honour citizenship based on identity: the Islamic identity. 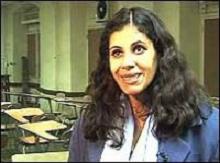 But Copts have always lived and contributed to this basing on their Egyptian identity. So where does this leave them now?
“Again, the MB say the Copts have every right to build places of worship. Then they go on to say ‘proportional’ to their [the Copt’s] population, which is an elastic condition that may be exploited according to every ruler’s whim.
“All the rights afforded to the Copts by the MB have always been conditional, which does not reflect the meaning of real citizenship,” she noted.
Mohamed Mursi has announced he will appoint a Coptic vice-president. “But what will the Coptic vice-president do? Will he be just an image? What will be his authority?” Dr Tadros wondered. “Especially given that Islamists endorse the principle that ‘No non-Muslim may patronise Muslims’.”
Flagrant Islamisation
While researching her book, Dr Tadros uncovered what she called a “flagrant plan” to ‘Islamise’ Egypt, allotting power to the Brotherhood while turning the street over to the Salafis.” These Islamic streams know very well what they are doing; curtailing freedom under the pretext that they are imported from the Western world,” she said.
But will this movement of Islamisation lead to division within Egypt? “This will lead to ‘dissociation’ within the Egyptian being,” Dr Tadros believes. “The fears of both the Copts and liberal forces would double, since it is expected that all general issues will bear the print of religious matters. Copts will probably feel isolated since the Islamic belonging will dominate; the general concept will be ‘We are Muslim’ not ‘we are Egyptian’.”
However, it is her opinion that the Brotherhood will not succeed in realising what they term the ‘Islamic caliphate’, since the deep-rooted sense of Egyptian identity will not allow the subjugation of the nation to religion.
Dr Tadros sees something positive in this. “Despite these facts on the ground, I am optimistic. I see that Egyptians will resist.”
What can Copts do?
Will the rising influence of the Brotherhood in Egypt affect in any way the upcoming election of a new patriarch for the Coptic Orthodox Church, now that the papal seat has been vacant since Pope Shenouda III died last March?
“Possibly but not necessarily,” Dr Tadros said. “The Copts may resist being marginalised as Egyptians by choosing a strong patriarch who will fight for their rights but, on the other hand, they may lean towards a spiritual patriarch for moral strength.”
“What are the Copts required to do at this point?” Watani asked. “In my opinion,” Dr Tadros said, “the Copts ought to precisely monitor and publicise every incident which goes on in the Egyptian streets and which carries sectarian implications. They should demand that such incidents and those who propagate them should be transparently taken to account.
“The Copts should engage in public and political effort; they should join liberal and civil forces and merge in as part and parcel of the opposition.”
WATANI International
29 July 2012

Letters to the dead

“Leave them with us and browse through Book Fair”

From Nubia: My grandmother’s tales