Cairenes always mark their calendar for the last week of January and first of February, two weeks that bring for entire families a highly cherished annual event: the Cairo International Book Fair (CIBF). It is the time for school mid-year holidays, so children especially look forward to a visit to the fair, a daylong outing that offers fun, activity, and books. 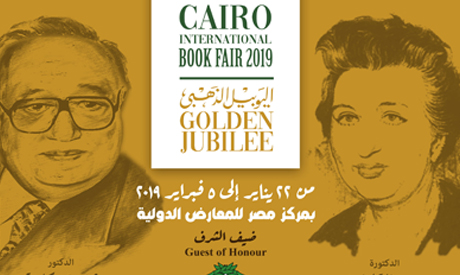 This year was no exception, except that the site of the fair was moved from its decades-long location of the Cairo Fair Ground in Nasr City, an eastern Cairo suburb, further east to a new fair ground that sprawls over 45,000sq.m in the satellite town of al-Tagammu al-Khamis. Even though special buses carried visitors to and from the fair, social media erupted in numerous complaints that the number of buses was inadequate. Visitors also criticised the long queues and stringent security measures. Watani’s Amany Ayed reports on bloggers comments on this issue, with one blogger summing it up in that he had come to hate this year’s fair. “Previous fairs were not as well-organised as this year’s,” he posted, “but they carried all the diversity and excitement that made them worth several visits. This one is impeccably organised, but has come with such difficulty in accessing it and leaving for home in the evening with heavy loads of books while transport means are scarce; in between, one has to lose precious time struggling through rigorous security.” So what brought in the record number of visitors? The variety of activities and the attractive prices of books. 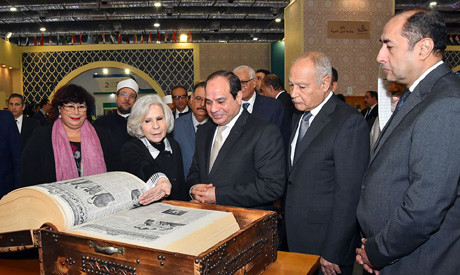 Opened by President
The Arab World’s oldest and largest book fair, the Cairo International Book Fair, was held from 22 January to 5 February 2019. This year marked a very special occasion: the CIBF turned 50.
To honour the fair’s jubilee year, President Abdel Fattah al-Sisi opened it jointly with Egypt’s Culture Minister, Ines Abdel-Dayem.
A documentary titled Pages of a Nation was screened, produced by the Egyptian General Book Authority (GEBO) and directed by Ahmed Yunis, featuring a narration of the history of the fair since it was first born.
Participating in this year’s fair were 1,274 publishers from 35 countries: ten African, 16 Asian, seven European, and two from the Americas. Cyprus, Ghana, Kenya, Nigeria, and Serbia took part for the first time.
Dr Abdel-Dayem expressed her happiness of the great public turnout in this round, and said that this golden jubilee edition is an “exceptional” new shift for the fair in Egypt’s history. The fair attracted more than three million visitors, a number unprecedented in its history. 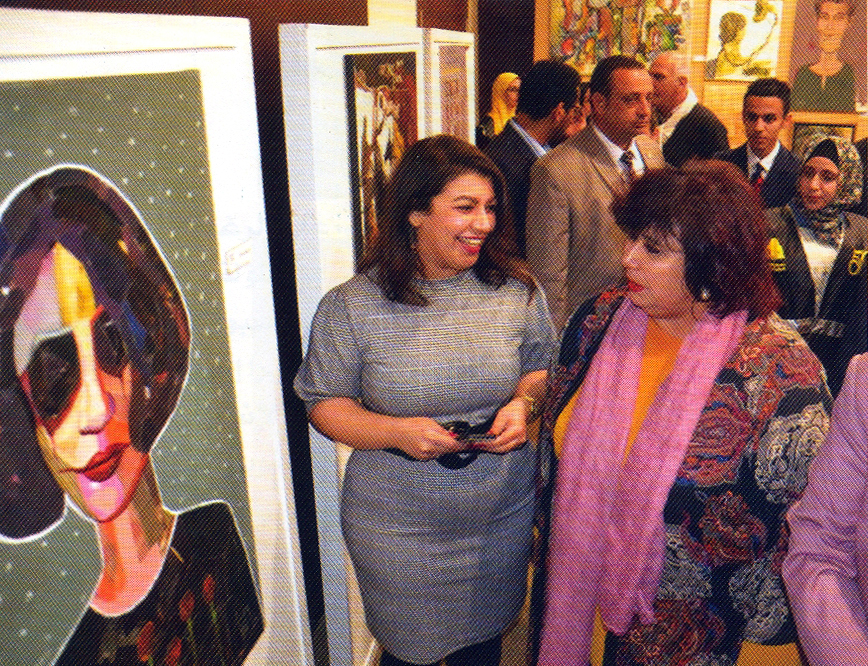 Dr Abdel-Dayem opened four plastic arts exhibitions; three were titled “visual reading” in the poems of Salah Jahin (1930 – 1986), a leading Egyptian vernacular poet, lyricist, playwright and cartoonist; Fouad Haddad (1927–1985) another Egyptian vernacular poet; and Afifi Mattar (1935 – 2010), a poet who wrote in classic Arabic. The poetry written by Jahin and Haddad lives on for its vibrant expression of people’s sentiments, traditions, and beliefs; pulsating with Egypt’s joys, tears, pride, and fears. Afifi, who is known as a “difficult poet” in literary circles, wrote poetry that was sophisticated in poetics and laden with allusions. The fourth exhibition featured cartoons by cartoonists from all over the world, focusing on the value of knowledge and the book as an enlightenment agent and character builder.

Seminal books
The fair activities featured, as has become the norm, numerous side events in culture and arts, many of them dedicated to children; eight workshops focused on writing, theatre, and fine arts. Book signing sessions were held for authors of books sold at the fair. The activities hosted 170 guests, Egyptian and foreign, and more than 300 poets and 2,500 writers, critics and artists. Volunteers, some 580 of them, were on hand to assist visitors.
The CIBF’s Person of the Year was Abdel-Rahman al-Sharqawi (1921 – 1987), a renowned playwright and among the prominent participators in renewing the Islamic religious address. The Arab League was the fair’s guest of honour. 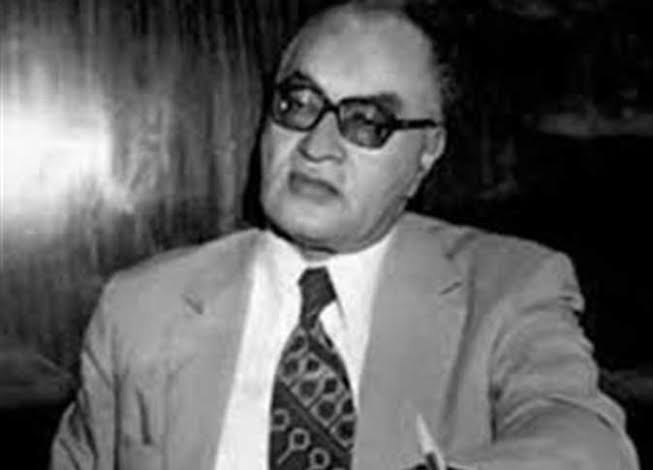 To mark CIBF golden jubilee, GEBO re-printed the Arabic translation of the 36-volume tome Description de L’Égypte, an extensive work describing everything about Egypt: its land, Nile, climate, animal and plant life, towns and villages, monuments, politics, economics, social life, traditions and customs, apparel, food, and everything imaginable. It was written by French scholars who accompanied Napoleon Bonaparte’s military expedition to Egypt in 1789 – 1801. The expedition is considered the turning point in Egypt’s history that took it over to modernity. 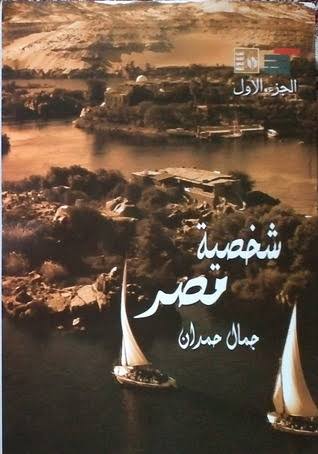 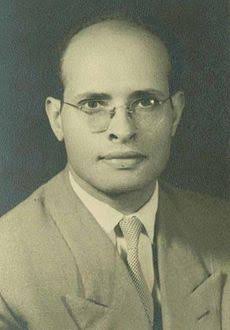 A seminar was held on another seminal tome: the encyclopaedic work of Gamal Hemdan (1928 – 1993) “The Character of Egypt, A Study in the Genius of the Place”, in which Hemdan elaborately expounded on the constituent factors that make up Egypt’s character through its geography that bred its history. The work was the product of 10 years of dedicated effort during which he used 245 Arabic and 691 foreign language references. 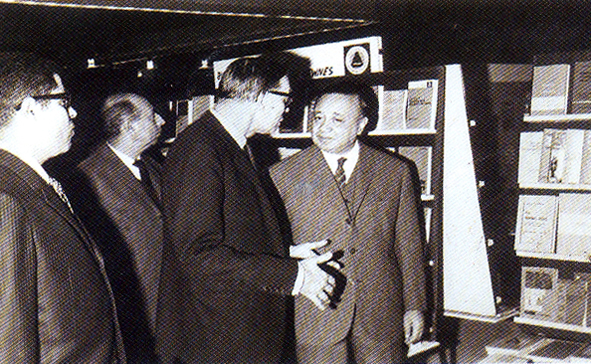 Soheir al-Qalamawi was spotlighted in a seminar which featured the participation of Gaber Asfour, former Culture Minister; and the Egyptian writers, novelists, and critics Salwa Bakr, Youssef al-Qaeed, and Khairy Doma.
Dr Asfour reviewed the life journey of Dr Qalamawi who, with total support from her father who was an enlightened physician, struggled hard for the opportunity to study at university in the 1930s, a time when no women students were allowed there. She became the first woman to enrol in university, graduating with a BA in Arabic language, after which she worked for Masters and PhD degrees which she earned with honours. In 1936, she was appointed as the first woman lecturer in Cairo University. Progressing on the academic line, she rose to professor, and became head of the Arabic Department in 1958 – 1967, the first woman to hold that position. 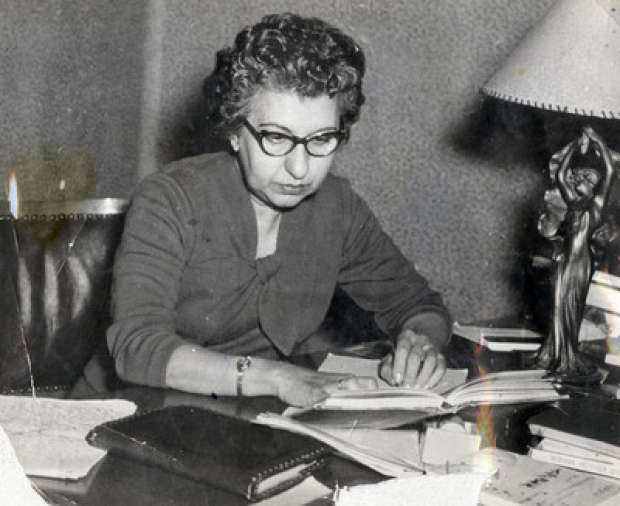 Dr Qalamawi was appointed head of GEBO in the 1960s. In her position as head of the foremost State-owned institution for books, she encouraged young authors and gave them the opportunity to have their books published under favourable terms by GEBO. The Cairo International Book Fair was her brainchild; she succeeded in persuading Dr Okasha who was then Culture Minister, to hold the annual fair.
Dr Qalamawi was a prominent scholar with numerous research works to her credit. She was also a prolific writer, novelist, and feminist. In the eyes of both academia and the public, she was the epitome of worth and respect.

Founder of Egypt’s cultural institutions
The seminars focusing on Okasha and Qalamawi were held in a hall named after Okasha.

Saber Arab, who was Minister of Culture in 2011 – 2013, said that Okasha was a singular cabinet minister who introduced a new perspective to the Ministry of Culture—it was then known as the Ministry of Culture and National Guidance. Okasha’s ambitions were not political, Dr Arab said, but were focused on spreading the culture of fine arts to every corner in Egypt, to every village and hamlet. To that end, he worked untiringly; today he is dubbed ‘founder of Egypt’s cultural institutions’. His leadership led to the foundation of the Cultural Palaces, palaces that had passed into the hands of the State when the monarchy came to an end in 1953, and which he turned into cultural centres. He also saw to the establishment of the Cairo Symphony Orchestra, the Cairo Ballet Group, the Arabic Music Group, the Sound and Light at the Giza Pyramids, the Academy of Arts, and a number of museums. In addition, he was a prolific writer and translator in art, politics and philosophy. To his credit, all these institutions are still functioning today, forming the backbone of the cultural movement in Egypt.
Yet all this pales before his greatest achievement of persuading UNESCO to rally world powers to rescue Nubia’s ancient monuments that would have been forever lost to humanity, submerged under the Nile water once the projected Aswan High Dam was built. Thanks to his dedication and collaboration with French Egyptologist Christiane Nobelcourt, concerted international effort and financing succeeded in rescuing the monuments by raising them from their original spots to higher ground. 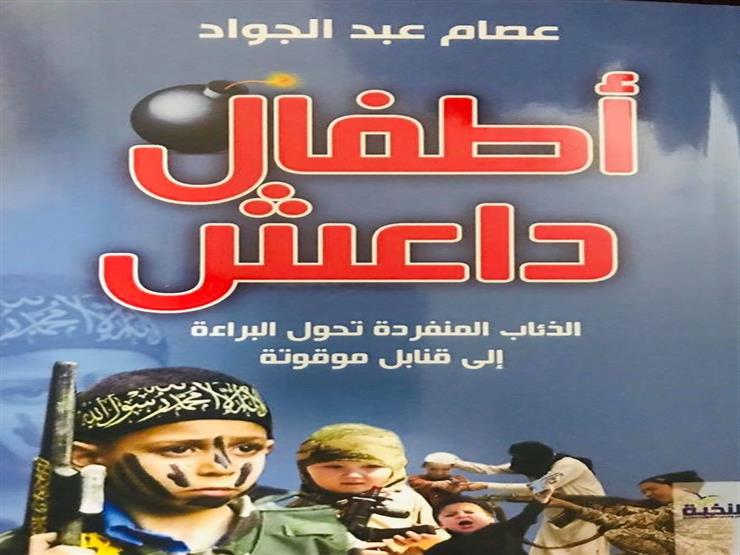 Among the books that sold well was “Children of Daesh”; Daesh is also known as Islamic State (IS) or ISIS. The book was written by Essam Abdel-Gawad and published by al-Nukhba Publishing House. It tells stories of children who grew up among the ranks of Daesh where terror is the norm and innocent children are turned into ticking time bombs. Gawad explains the danger of Daesh and their ways of child soldiering, indoctrination, training children on carrying and using arms, warfare, suicide bombing, and spying.
On a totally different note, Cairo children could treat themselves at the CIBF to Aragoz shows by the Puppet Theatre, including “Butterflies” and “The Rabbit and the Fox”. The traditional Egyptian folkloric puppet art of Aragoz was last December recognised by UNESCO as an item of intangible heritage, and placed on its Intangible Heritage List.

Up and down
Founded in 1969, the CIBF is organised by the General Egyptian Book Organisation and has grown from an initial 462 publishers hailing from 47 countries and bringing with them some 100,000 books, to this year’s 1,274 publishers from 35 countries and some 4 million titles.
According to [https://cairobookstop.wordpress.com/find-a-book-in-cairo/cairo-international-book-fair/] there was an initial, gradual decline in participation after the fair’s founding year, but in 1982 the trend reversed and gradually more countries and publishers began to participate in the CIBF until the fair peaked in 2004 with 3,150 publishers, 97 countries represented, and about 5 million books. However, according to statistics on the CIBF’s website, a sharp decline occurred the following year 2005 in the number of publishers, countries, and books available. 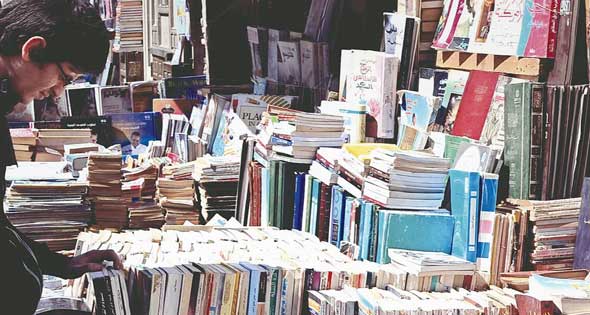 Since the dip in 2005, the CIBF continued to pick up again until the Arab Spring uprising that started on 25 January 2011. The fair, which was scheduled to start around the time of the uprising, was cancelled entirely in 2011, hurting sales for all those who’d signed up to participate. The 2012 book fair was a bit sluggish and slapped together at the last minute, but it still brought in 745 publishers and around two million books.
By 2013 the fair was back on track with good attendance; all the big name bookstores and houses were in their usual spots, some 800 publishers and two million books. After that it was steady sailing till 2019, 50 years on the first fair.