In the 13th session of the Intergovernmental Committee for the Safeguarding of Intangible Cultural Heritage at UNESCO, a unanimous vote endorsed Egypt’s proposal to recognise the traditional Egyptian art of puppetry as an object of intangible heritage.

The UNESCO Intangible Cultural Heritage (ICH) list was drafted in 2003 to recognise, protect, and promote the different cultural practices that exist within member nations. The list is made up of an array of oral traditions, languages, performing arts, social practices and rituals and philosophies, as well as traditional craftsmanship. It recognises the instruments, artefacts, objects and spaces that are used to perform or practice these cultural intangibilities.

Ehab Badawy, Egypt’s ambassador to France and its permanent representative to UNESCO, said that the proposal and its endorsement come as part of joint efforts between the Egypt’s ministries of Foreign Affairs and Culture to bring forth Egypt’s rich heritage. It is not the first Egyptian entry on the list, he reminded; the Egyptian epic al-Sirah al-Hilaliyyah, and traditional Upper-Egyptian stick-dance al-Tahteeb are aready included.

The Aragoz is a long-standing artistic practice that can be traced to funeral dolls placed in Pharaonic tombs, but the techniques we know today started in the 1950s. Inspired by the art of marionettes in Europe, the first offical Aragoz troupe was instated by the Egyptian government in 1957. In 1959, Salah Jahine’s al-Shater Hassan was performed at the Arab Music Conservatory by Théâtre de marionettes du Caire’s, Naji Shaker – the first original Egyptian Aragoz story in modern times. The form was popular with the bourgeoisie and high-culture elites, but soon became a hallmark of performance arts in Egypt’s street-carnivals due to its accessibility and popularity of its authors.

The tradition is still very much alive and, while it has been demoted to being a nostalgic novelty, puppetry in general has experienced something of a resurgence. The year 2011 saw the rise of Abla Fahita, a boss-bitch in the Aragoz world who took off as a popular YouTube log commenting on the Arab Spring uprising and making funny skits with Carolina, her granddaughter. Fahita then secured her diva-status appearing on television with Bassem Youssef, later hosting her own show, and making red-carpet appearances at international film festivals. 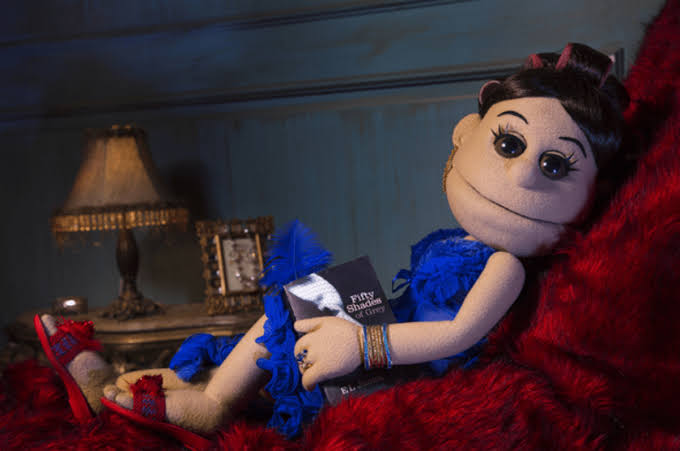