In a grand celebration attended by public figures, government representatives, and foreign dignitaries and members of the diplomatic corps in Cairo, the colossal statue of one of Egypt’s greatest pharaohs, Ramses II, was moved to its final place of display in the lofty entrance atrium of the Great Egyptian Museum (GEM).
Ramses II, also known as Ramses the Great, was the powerful imperial ruler and prolific temple builder who ruled Egypt from 1279 to 1213 BC. Under him, the Egyptian empire stretched from the Levant in the north to Nubia in the south; he defeated the enigmatic Sea People, also the Hittites in the famous Battle of Kadesh after which he signed with them the first-ever peace treaty in the world. 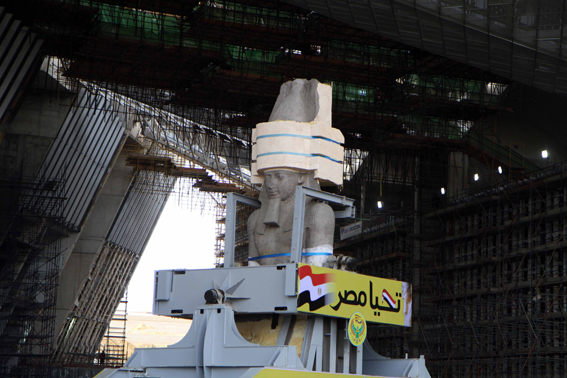 Marching band and mounted guard
The 83-ton, 11-metre high, 3200-year old statue sculpted out of Aswan red granite, had been in safekeeping storage where it was kept from public view since 2006. Now it will be on display at the GEM which is set for partial opening later this year 2018; its full, official opening is scheduled for 2022. At its new location, the statue will be the first thing visitors see as they enter the museum.
Invitees were welcomed at 8am in a special marquee set up for the occasion. Antiquities Minister Khaled al-Anani officiated, flanked by top antiquity officials. The move of the statue began at 10am and travelled the 400-metre distance to reach his final destination at the atrium of the museum at 11am.
A marching band and mounted military guard were on hand to escort Ramses on his short journey.
Owing to its staggering size and weight, any movement of the statue was hazardous. The complex operation was undertaken by army engineers and the Egyptian firm, the Arab Contractors.
The ancient colossus journeyed inside a custom-made metal cage, mounted on an orange truck emblazoned with the Egyptian flag. It was suspended in the gyroscopically mounted cage, like a pendulum from a steel beam, and wrapped in foam rubber, to help offset any jolts from the ground during transport. The road surfaces were treated with special materials to ensure they could adequately bear Ramses’s huge weight. The transfer operation cost EGP13.6 million (USD770,000). 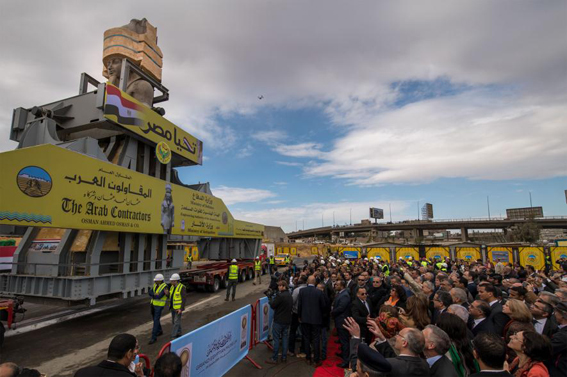 Grand Egyptian Museum
Called the ‘world’s largest museum’, the Grand Egyptian Museum was conceived in 2002 as a modern repository for Egypt’s ancient treasures, and the 72,222 sq.m building is currently under construction in the shadow of Giza’s iconic pyramids. When the museum is completed in 2022 at a cost of roughly a billion dollars, partly funded through a USD300 million-grant from Japan, it will have the capacity to display 100,000 artefacts.
The museum is envisaged as a cultural complex of activities devoted to Egyptology and will contain 24,000sq.m of permanent exhibition space, almost four football fields in size, a children’s museum, conference and education facilities, a large conservation centre and extensive gardens.
The GEM will house, among many other antiquity artefacts, the Tutankhamen collection currently housed in the Egyptian Museum in Cairo, and the Solar Boat now resting in a museum at the foot of the Great Pyramid.
The Ramses statue is the first major artefact to enter the permanent collection area of the GEM, according to Tarek Tawfik, the museum’s supervisor-general.

Next-door to pyramids
The museum was designed by Heneghan Peng Architects, an architecture firm based in Dublin and Berlin.
On their website, Heneghan Peng Architects offer a description of the GEM:
“The site for the Grand Egyptian Museum is located at the edge of the first desert plateau between the [Giza] pyramids and Cairo. It is defined by a 50m level difference, created as the Nile carves its way through the desert to the Mediterranean.
“The pyramids are located on the desert plateau 2km from the museum site, whereas the site for the museum is both in the valley and on the plateau.
“The design of the museum utilises the level difference to construct a new ‘edge’ to the plateau, a surface defined by a veil of translucent stone that transforms from day to night. The museum exists between the level of the Nile Valley and the plateau, never extending above the plateau.
“A three-dimensional structure inscribed by a set of visual axes from the site to the three pyramids defines the framework within which the museum emerges, from the overall scale of the site to the smallest of details.
“The approach to the museum is a series of layers, whereby the visitor moves through a monumental forecourt, a shaded entrance area and a grand staircase that ascends to plateau level, the level at which the galleries are located where for the first time the visitor sees the pyramids from within the museum.” 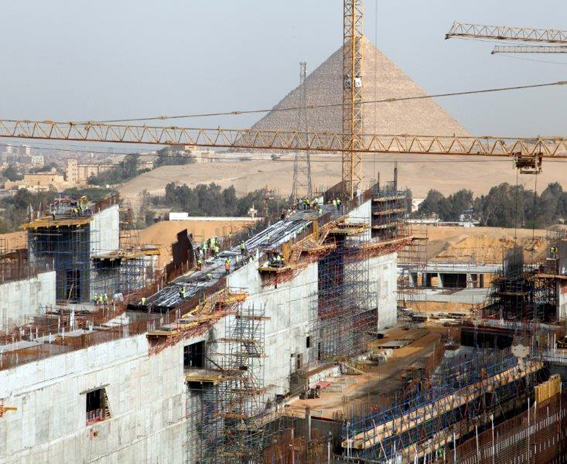 Buried under desert sand
The recent move is not the first undergone by Ramses’s colossal statue.
It was first transported in the 13th century BC from the granite quarries of Aswan, some 700km south of present-day Cairo, to the Temple of Ptah in the ancient capital of Memphis, today a site in Giza called Mit-Rahina, some 25km south of Cairo.
Over millennia, the statue had fallen on its side and became buried under layers of desert sands. In 1820, it was discovered by Italian Egyptologist Giovanni Battista Caviglia, the archaeologist who originally excavated the Sphinx.
In 1954, Egypt’s President Gamal Abdel-Nasser ordered that the statue be brought to Cairo. It was transported by tank, reassembled and restored and, in 1955, moved to Cairo’s then main square in front of the railway station; the square since then earned the name Ramses Square. A water fountain was built in front of the statue and a lawn was planted around it, making a formation that would for decades grace postcards of Cairo. 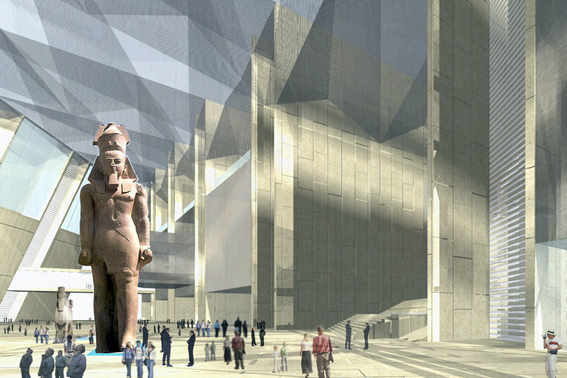 From Giza to Cairo
Consultant engineer and Watani reader Samir Sabry Boutros was among those involved in the move of the statue from Mit-Rahina to Ramses Square in 1955. He wrote:
“At that time I was the only Egyptian engineer employed by the German firm Stahlbau Rheinhausen, a branch of the famous Krupp. Until it was taken to Ramses Square the statue was lying in one piece in the desert at Mit Rahina, Giza. It had part of a leg and a foot missing, and a deep gash ran from the thigh to the left fist. This crack was a source of worry to the engineers responsible for the move, since they were afraid it might break into a complete fracture during transportation.
“It was planned to lift the statue and place it, lying in a horizontal position, on a crane to move to Cairo’s Railway Station Square where it would be unloaded and set upright on its new base. Since the company’s main consideration was the crack, which if fractured could cause an international scandal, it was decided to manufacture a metal structure to surround the statue on all sides. This was formed of individual sections, each put in place separately.
“The structure was soldered and then caged, after which we lifted it up and put on the base in the square. The job was managed by an Italian specialist subcontractor, who made steel bars to support the crack. Where the steel was visible it was covered by granite of the same texture as the statue. This granite still shows on the statue’s fist.
“When the statue was lifted on to the base it was still in a prostrate position in the metal structure. It was pulled into a vertical position using joists, and finally we removed the metal structure.” 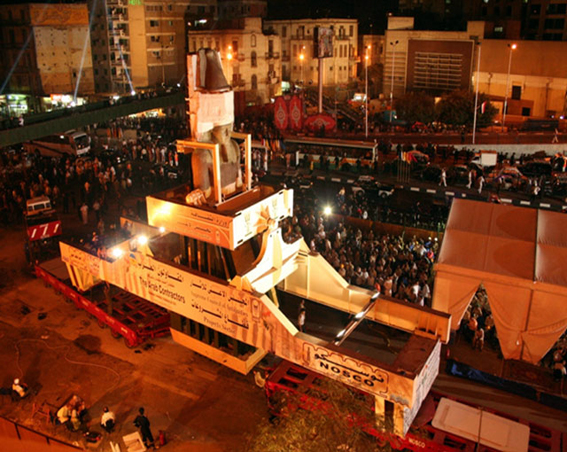 Leaving the Square
With Cairo’s exponential growth, the rise in population necessitated the building of flyovers and pedestrian bridges all around Ramses who, as the millennium set in, was no longer visible in his full glory in the square. Furthermore, the chronic traffic congestion and high pollution negatively affected the statue. It was decided to move Ramses from Ramses Square.
In 2002, the project for the Grand Egyptian Museum took off, and a decision was taken to move Ramses there. He would occupy the place of honour in the museum’s entrance hall.
It took four years of meticulous planning to make sure the colossal statue would make the 30km journey from the heart of Cairo to its new home at the GEM in Giza without any damages. In 2006, the move was done.
Two dry runs were made prior to moving the colossal statue. The first took place on 23 July, which is Egypt’s national day and an official holiday, when huge rocks weighing 95 tons were transferred along the route. The second was done a week later with a rough replica of similar weight to the statue. 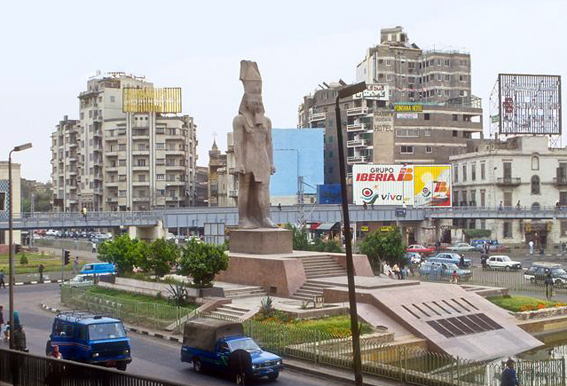 In reverence for “Grandfather”
The real move was made in August 2006 by the Arab Contractors who swaddled the statue in rubber foam and placed it in an upright position on two flat-back trucks. The journey took 10 hours. Cairo municipality had to dismantle and then rebuild one pedestrian bridge to make way for the statue. The operation cost EGP6 million.
Even though the statue travelled in the late evening to make sure Cairo traffic was at its lowest and the streets would be near-empty, Cairenes lined up on the sidewalks, stood on balconies, even climbed the rail of the Nile bridge the statue was scheduled to cross, to salute the great Pharaoh. It was an amazing grand night, with people hailing the king, and fondly cheering him on: “Come on, Grandfather!” Church bells chimed as he passed, and the call for dawn prayer sounded as he neared his final destination.
The only official ceremonial formality accompanying the move was that the attending security officers and staff donned their ceremonial dress, in reverence for the great king.
And today, Ramses Square remains “Ramses Square”. 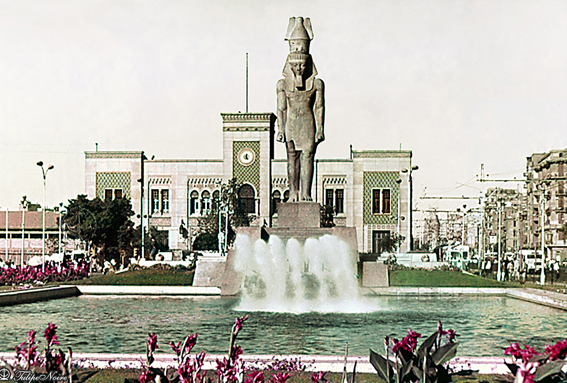 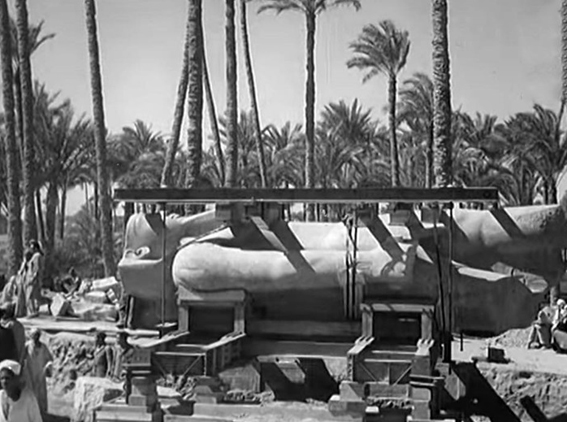