Bloomberg, a global leader in business and financial data and news, has reported that

Egypt’s inflation rate slowed to its lowest level in over nine years. Consumer prices in urban parts of the country, the report said, rose by 3.1 per cent in October compared to 4.8 per cent in September, according to the state statistics agency, CAPMAS. The rate was the lowest since September 2010, according to data compiled by Bloomberg.

According to Bloomberg, the decline in inflation rate allows Egypt’s central bank to move ahead with another interest rate cut when it meets next Thursday. Six of seven economists surveyed by Bloomberg predicted a cut of 100 basis points; the benchmark rate is currently 13.25 per cent.

The regulator has cut interest rates by 2.5 percentage points since August 2019.

Bloomberg went on to say that the slowdown in the rate of annual inflation was one of the central bank’s biggest accomplishments since Egypt embarked on a sweeping IMF-backed economic programme in 2016 when the regulator floated the EgyptIan Pound. 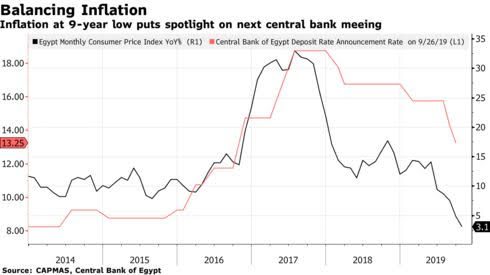