St Catherine’s Monastery in Sinai witnesses the opening of its newly-restored library, home to treasured codices and manuscripts and the world’s oldest continuously operating library; and the inauguration of the stunning Byzantine mosaic of the Transfiguration after restoration

The library of the 5th-century monastery of St Catherine’s in Sinai is now open after four years of restoration work. Antiquities Minister Khaled al-Anani presided over the opening event which took place at the monastery on 16 December 2017.
Governor of South Sinai, Khaled Fouda; and Minister of Local Development, Hisham al-Sharif also attended the opening, together with ambassadors and MPs. The event also witnessed the inauguration of the mosaic of the Transfiguration, which had undergone extensive restoration, in the basilica of the monastery.
Abdel-Rehim Rihan, the Antiquity Ministry’s Director General of archaeological studies and publications on Sinai and Egypt’s Delta region, explained to Watani that the library, which includes a priceless collection of old codices and manuscripts, never was and will not open to the public. Apart from the monks who find in it invaluable spiritual and scholarly appeal, it only serves scholars and researchers who need special permits to access it. 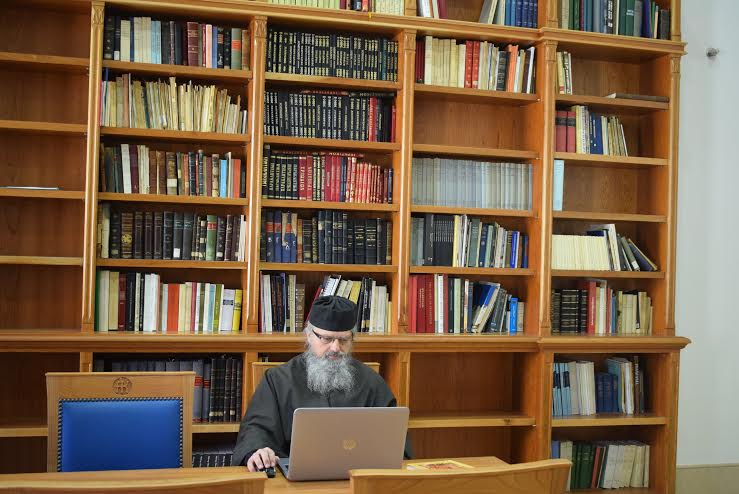 World’s oldest
St Catherine’s is the world’s oldest continuously operating library. It preserves the second largest collection of early codices and manuscripts in the world, outnumbered only by the Vatican Library.
The library is housed inside the monastery walls, on the third floor of an old building that lies south of the church of the Transfiguration. It comprises three chambers in a row; the middle one was used in old times as an assembly place for the monks.
Dr Rihan explained to Watani that, apart from a collection of some 1,000 modern publications, the library houses 6,000 codices and manuscripts the oldest of which dates back to the 4th century. Among them, Dr Rihan said, are 2319 texts in the Greek language, 284 in Latin, 600 in Arabic, 86 in Georgian, and others in Aramaic, Syriac, Coptic, Amharic, Armenian, Hebrew, Caucasian and Albanian, as well as in English, French, and Polish. He said the manuscripts include texts that focus on religion, history, geography, and philosophy.
Among the library’s thousands of ancient parchments are at least 160 palimpsests, manuscripts written between the 8th and 12th centuries on leather formed of two layers, the first of which would be erased in order for a new text to be written on the leather. The manuscripts bear faint illegible scratches and flecks of ink beneath the more recent writing, the only clues to words that were scraped away to reuse the parchment, owing to the high cost of leather. Some were written in long-lost languages that have almost entirely vanished.
Last July witnessed the announcement of the most recent palimpsest discovered at St Catherine’s: a 5th – 6th century palimpsest that includes Bible texts in Syriac as well as parts of a medical recipe of the renowned Greek physician Hippocrates (c 460 – 370BC). 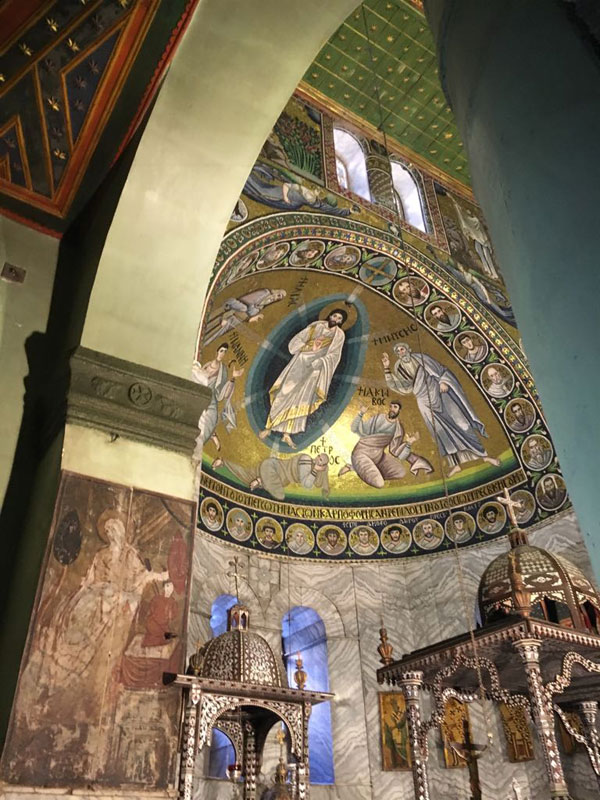 Syriac Sinaiticus, Codex Sinaiticus
The library at St Catherine’s is perhaps most famed for its Codex Sinaiticus which was discovered in the mid-19th century by Constantin von Tischendorf. It dates back to 345AD and was at the time of discovery the oldest well-preserved manuscript of the Bible. Later in the 19th century, however, it was suspiciously moved from St Catherine’s to Russia.
It took until 2003 for Russian scholars to discover a donation act for the manuscript signed by the Council of Cairo Metochion and Archbishop Callistratus on 13 November 1869. The monastery was then given 9,000 rubles as a gift from Russia’s Tsar Alexander II. In 1933, Stalin sold the Codex to the British Library in London where it is now on public display.
In 1892, a palimpsest found at St Catherine’s Library was identified as Syriac Sinaiticus, and still remains with the monastery. It predates the Codex Sinaiticus and was instrumental in understanding the history of the New Testament. It features works composed in Syriac, a language derived from an eastern Aramaic dialect, that include specimens of a 5th century copy of the Gospels, a copy of the Lives of Women Saints from 779AD, and a copy of the Apology of Aristides the original Greek version of which is lost.
The Monastery also has a copy of the Ashtiname of Muhammad, in which the Islamic Prophet is claimed to have bestowed his protection upon the monastery.
UCLA Library is in the process of reproducing digital copies of some 1,100 rare and unique Syriac and Arabic manuscripts from Saint Catherine’s, their dates ranging from the 4th to 17th century. The project is the fruit of collaboration between Saint Catherine’s Monastery, UCLA Library, and the non-profit Early Manuscripts Electronic Library (EMEL), and is funded by a recent grant offered by The Ahmanson Foundation. 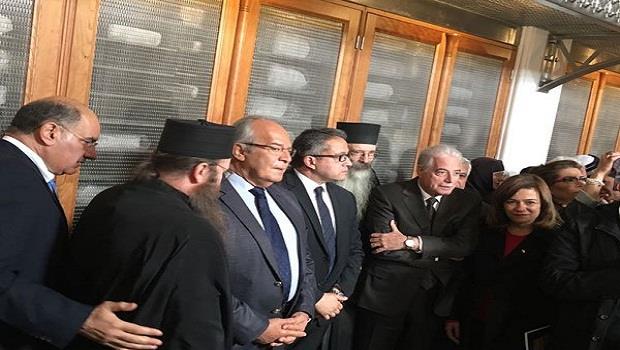 Arabic Coptic texts
Dated according to the Hijri calendar, many of Arabic Christian manuscripts show obvious Islamic literature influence. They start with the greeting Bismillah, literal for ‘In the Name of Allah’, and conclude with al-Hamdulillah, literally ‘Praise be to Allah’. Some books of the Holy Bible in many manuscripts begin with Bismillah.
Many of the Christian apostles and saints are called al-Mustafa, meaning the Chosen One, instead of the traditional Christian al-Bashir, meaning the Evangelical or the Bearer of Good News. Most of these manuscripts are decorated with paintings and ornamentation of birds, flowers, botanical motifs and frames in the Arabic style.
St Catherine’s is also famous for the irreplaceable works of art it houses. These include mosaics; the best collection of early icons in the world, many in encaustic; as well as liturgical objects; and chalices and reliquaries.
The large icon collection begins with a few dating to the 5th and 6th centuries, which are unique survivals; the monastery having been untouched by Byzantine iconoclasm, and never sacked. A project to catalogue the collections has been ongoing since the 1960s. The monastery was an important centre for the development of the hybrid style of Crusader art, and still retains over 120 icons created in the style, by far the largest collection in existence. Many were evidently created by Latins, probably monks, based in or around the monastery in the 13th century. 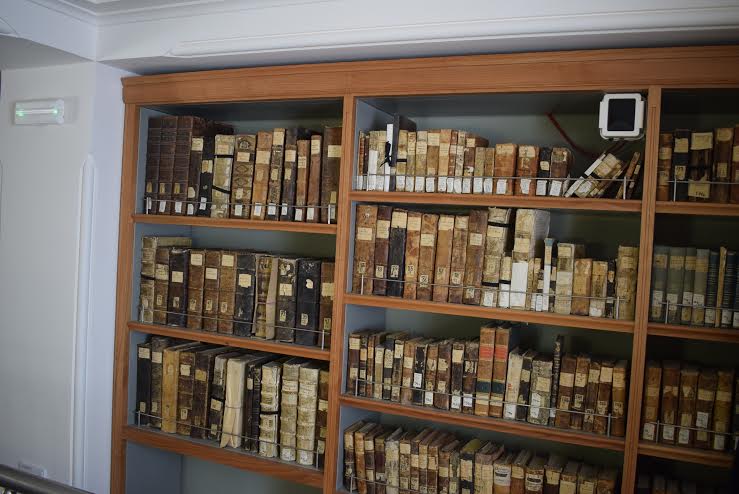 Transfiguration mosaic
The mosaic of the Transfiguration, which decorates the sanctuary apse in the monastery’s basilica, and which was inaugurated during the Sunday 16 December event, is a jewel of early Byzantine art. It goes back to the 9th century, covers an area of 46 square metres, and is made of small fine pieces of mosaic of vivid colours or covered with gold and silver foil.
Christ is portrayed in an oval “glory” between Moses and Elijah who represent the Law and the Prophets. Below, three awed disciples: Peter, James and John, are pictured in different poses. The subject of the icon is mentioned in the Gospels; Matthew 17: 1-9 says:
“After six days Jesus took with him Peter, James and John the brother of James, and led them up a high mountain by themselves. There he was transfigured before them. His face shone like the sun, and his clothes became as white as the light. Just then there appeared before them Moses and Elijah, talking with Jesus.
“Peter said to Jesus, ‘Lord, it is good for us to be here. If you wish, I will put up three shelters—one for you, one for Moses and one for Elijah’.

While he was still speaking, a bright cloud covered them, and a voice from the cloud said, ‘This is my Son, whom I love; with him I am well pleased. Listen to him!’
“When the disciples heard this, they fell facedown to the ground, terrified. But Jesus came and touched them. ‘Get up,’ he said. ‘Don’t be afraid’. When they looked up, they saw no one except Jesus.”
Because of the famous mosaic, the Monastery’s church became known as the Church of the Transfiguration of Christ the Saviour.
Over the centuries, the Transfiguration suffered extensive damage; hence the need for its restoration.

Sacred to three Abrahamic religions
St Catherine’s monastery, built between 548 and 565, has famously carried the name of the Alexandrian female saint who was martyred during the Roman persecution; tradition has it that angels carried her remains to Mount Sinai where they were found by the monks in AD800. The official name of the monastery, however, is the “Sacred Monastery of the God-trodden Mount Sinai”, and its patronal feast is the Feast of the Transfiguration.

The monastery lies on the Sinai Peninsula, at the mouth of a gorge at the foot of Mount Sinai, and is controlled by the autonomous Church of Sinai, part of the Eastern Orthodox Church.
Mount Sinai has traditionally been known as the site where Moses received the Ten Commandments from God, and where he had earlier seen the Burning Bush. The monastery encloses the Chapel of the Burning Bush and a living bush believed to be itself the Burning Bush. During the seventh century, the isolated Christian anchorites of the Sinai were eliminated: only the fortified monastery remained. The monastery is still surrounded by the massive fortifications that have preserved it.
A mosque enclosed within the monastery walls was a chapel that was converted into the mosque during the Fatimid Caliphate (909 – 1171); it was restored in the early 20th century.
St Catherine’s is sacred to the followers of the three Abrahamic faiths, Christianity, Judaism, and Islam, and is thus a favourite site of pilgrimage; Pope John Paul II made a pilgrimage there in 2000. The monastery has been a UNESCO World Heritage Site since 2002.