On 6 June, the Coptic Church in Germany will be celebrating Mass in the memory of the arbaeen of Abouna Pigol (1935 – 2020), who was pastor of the Coptic Orthodox Church of Mar-Girgis (St George) in Frankfurt since 1987. The Mass will be at St Anthony Monastery in Kroeffelbach, Germany. “Arbaeen”, literally forty, refers to the passage of 40 days on the passing away of a person, and is celebrated by Copts in a tradition that goes back to pharaonic times when it was related to the process of mummification. 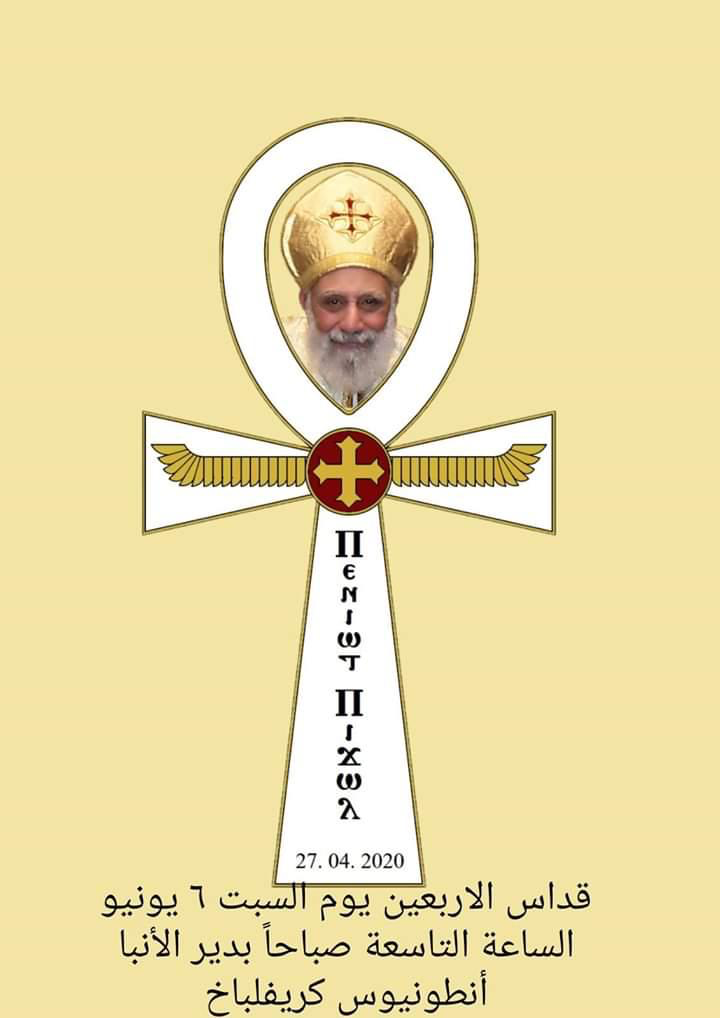 He was mourned by Pope Tawadros II as the “blessed priest who served God in Egypt and Germany, in spirit and truth. He served faithfully with overflowing love and sacrifice, and was a role model of profound love for his [Coptic] Church, her faith, rituals, and language”. That was Abouna, literally ‘Father’, Pigol Bassili (1935 – 2020), who passed away in Frankfurt on 27 April 2020. Pope Tawadros went on to say: “Our beloved Abouna Pigol has departed at the time during which we live the joy of the glorious Resurrection of Christ. We offer our condolences to his Church; family; sons and daughters; His Grace Anba Mishail, Bishop of Southern Germany and Abbot of St Antonius Monastery in Waldsolms-Kröffelbach; and to his blood brothers: Anba Demetrius; and Fr Kyrillos Bassili; and all the blessed who loved him. May his soul rest in peace, and may God grant you all comfort.”

Abouna Pigol (also written Bigoul, Pigoul or Pijoul) was born George Bassili Maqar in February 1935 in the city of al-Arish in North Sinai, but the family moved to Alexandria where he grew up. He was one of 11 siblings in a devout Coptic family which was closely attached to the Church and which used Coptic language in their daily life. Other than Abouna Pigol, five among the sons and daughters went on to become priests or nuns: Anba Demetrius, Bishop of Mallawi, Ansena and Ashmunin, and Abbot of Ava Fini Monastery in Minya, Egypt; Fr Kyrillos, priest at the church of St Mary and St Mina in Clearwater, Florida; the two nuns at Abu-Seifein Convent in Old Cairo: Yustina, and Aghapi who passed away in 1991; and Tassoni Angele (1931 – 2019), wife of the legendary Fr Bishoy Kamel (1931- 1979) who founded and served the church of Mar-Girgis (St George) in Sporting, Alexandria.  Tassoni is Coptic for ‘Sister’, a title commonly used for women who consecrate their lives to God. 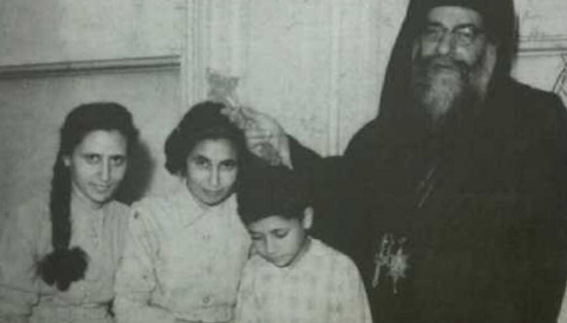 The other siblings are Engineer Maher and Dr Fayez Bassili; as well as Marie Bassili who passed away in 2012, Fadila Bassili who left our world in 2017; and Engineer Victor Bassili who departed in 1988.

Mina Badie Abdel-Malek, Professor at Alexandria University, Coptic history researcher, and a writer who focuses on Church history and Coptic figures, wrote to Watani reminiscing about Abouna Pigol whom he knew since their youthful years in Alexandria. Under the title “Departure of a faithful servant of the Lord”, Dr Abdel-Malek wrote that George Bassili graduated from Alexandria University with a degree in Electrical Engineering. Following completion of his military service, he worked with the Cairo telephone authority where he gained a reputation for being a brilliant engineer with outstanding moral values, and was thus assigned with the setting up of new telephone exchanges, a task that called for special expertise.

George Bassili’s Church life, according to Dr Abdel-Malek, started at the church of the Holy Virgin in Muharram Bey, Alexandria. “I knew him and his family; we all used to serve at the Holy Virgin’s. We became closer during the papacy of Pope Kyrillos VI (patriarch from 1959 to 1971, canonised in 2013) since we used to join him in prayer at St Mark’s Cathedral in Alexandria, on a regular basis.”

“In the mid-1960s,” Dr Abdel-Malek wrote, “George Bassili moved to Cairo where he worked. He attended St Mark’s Church in Heliopolis, serving there as a Sunday School teacher. In 1981, he was ordained a priest under the name Abouna Pigol, at the hands of Pope Shenouda III who patriarch in 1971 – 2012. Abouna Pigol served in the church of the Holy Virgin in Ard al-Golf in Heliopolis, which opened in 1982. There, he was famous for his enthusiastic service and wide knowledge of Coptic tradition, rituals, melodies, and language. The congregation loved him for his good-natured humbleness and self-denial, as well as his absolute dedication.” 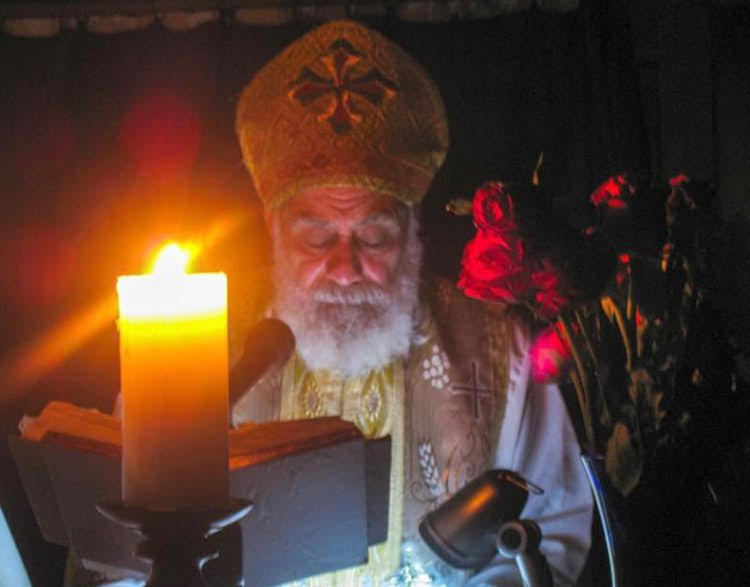 In 1987, Pope Shenouda moved Abouna Pigol to Frankfurt to serve the Coptic Church there. He cared for everyone, old and young, opening his arms and home to welcome all in legendary hospitality.

According to Ishaq Agban, Head of the Institute of Coptic Studies in Cairo, Abouna Pigol, apart from his diligent pastoral service, did outstanding work in teaching Coptic language to the congregation who responded to his enthusiasm by embracing Coptic as a language to use on frequent basis.

In his own words, Abouna Pigol saw language as “the backbone of identity, an expression that defines who a person is. The Coptic language still lives in Egypt, and is used by Egyptians, even though many may not be aware of it; vernacular Egyptian includes numerous Coptic words and expressions!”

Dr Abdel-Malek remembers Abouna Pigol as a man deeply interested in the study of history, especially Egypt’s history, since his youthful years. “His discussion of history was knowledgeable and enlightened. His engineering mind would link historical facts and incidents, especially where the Church was concerned, in an ingenious manner.

“When the magazine Rhakoti, which was published three times a year and focused on Coptic studies, was first issued in 2004 by Mar-Mina Society in Alexandria, Abouna Pigol was keen to get every issue and, whenever we met, would discuss its content with me in detail. The magazine, of which I was chief editor, was discontinued in 2011 owing to the turbulent general conditions in Egypt in the wake of the Arab Spring uprising in January 2011.

“This reminds me of many profound discussions of history that used to take place between Abouna and his departed brother Victor Bassili who was also an electrical engineer and an avid reader of history.”

On the personal level, Abouna Pigol said that when he decided to get married, he looked for a woman who, among other traits, would be fluent in Coptic, share for his enthusiasm for the language, and be prepared to raise their children to use it. He found his heart’s desire in Hatasso Naguib Rizkalla who came from a Coptic-loving family and whose paternal uncle Psanti Rizkalla taught Coptic language in Alexandria’s Clerical College, the Coptic Orthodox seminary. George and Hatasso got married in 1972, and together had three children: Noufer, born 1974; and the twins Rano and Vert who were born in 1977. 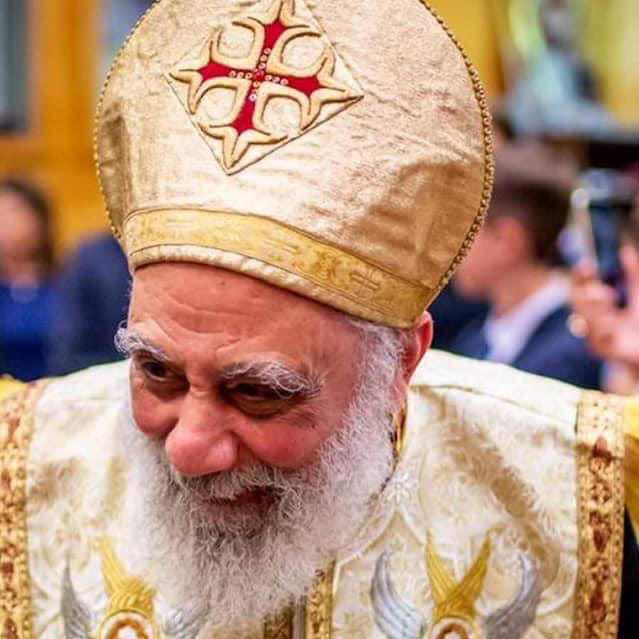 Dr George Latif of St Mark’s Church in Heliopolis, remembers an amusing story he heard from Tassoni Hatasso about her son Noufer. When three years old, she said, the little boy spoke only Coptic. “He learned only one Arabic word from our neighbours’ children,” she said, “and that was ‘La’, meaning ‘No’.”

Tassoni Hatasso passed away in Frankfurt in April 2012. She was deeply mourned by the congregation and all who knew her for her loving kindness, warmth, legendary hospitality, and service side by side with Abouna Pigol.

Today, Noufer Bassili is a civil engineer married to Olivia Bassili with whom he has two boys Royce, 9, and Gori, 6. Rano is also a civil engineer, and is married to Viviane Fawzy. Vert, an architect, is married to Samoil Matta; she has with him two children: Savie, 10, and Lerie, 6. They all live and work in Germany.

Many who knew Abouna Pigol wrote glowing testimonials on him. Among them were members of the clergy who had served alongside him, fellow-servants of the Church, and persons whom he served and who remember him dearly. Nagui Lewis Aziz wrote: Abouna Pigol was my beloved and respected Sunday school teacher at the Holy Virgin’s Church in Muharram Bey, Alexandria. He was very humble, knowledgeable, and spiritual. Yet he was very cheerful and welcoming, famous for his “Ahlan Ahlan Ahlan!” (Welcome, welcome, welcome!) to those he met. I saw him in England a few years ago and that was a pleasure. Rest in peace Abouna, you were honest in the service you delivered; I will never forget you. Pray for us till we meet.” 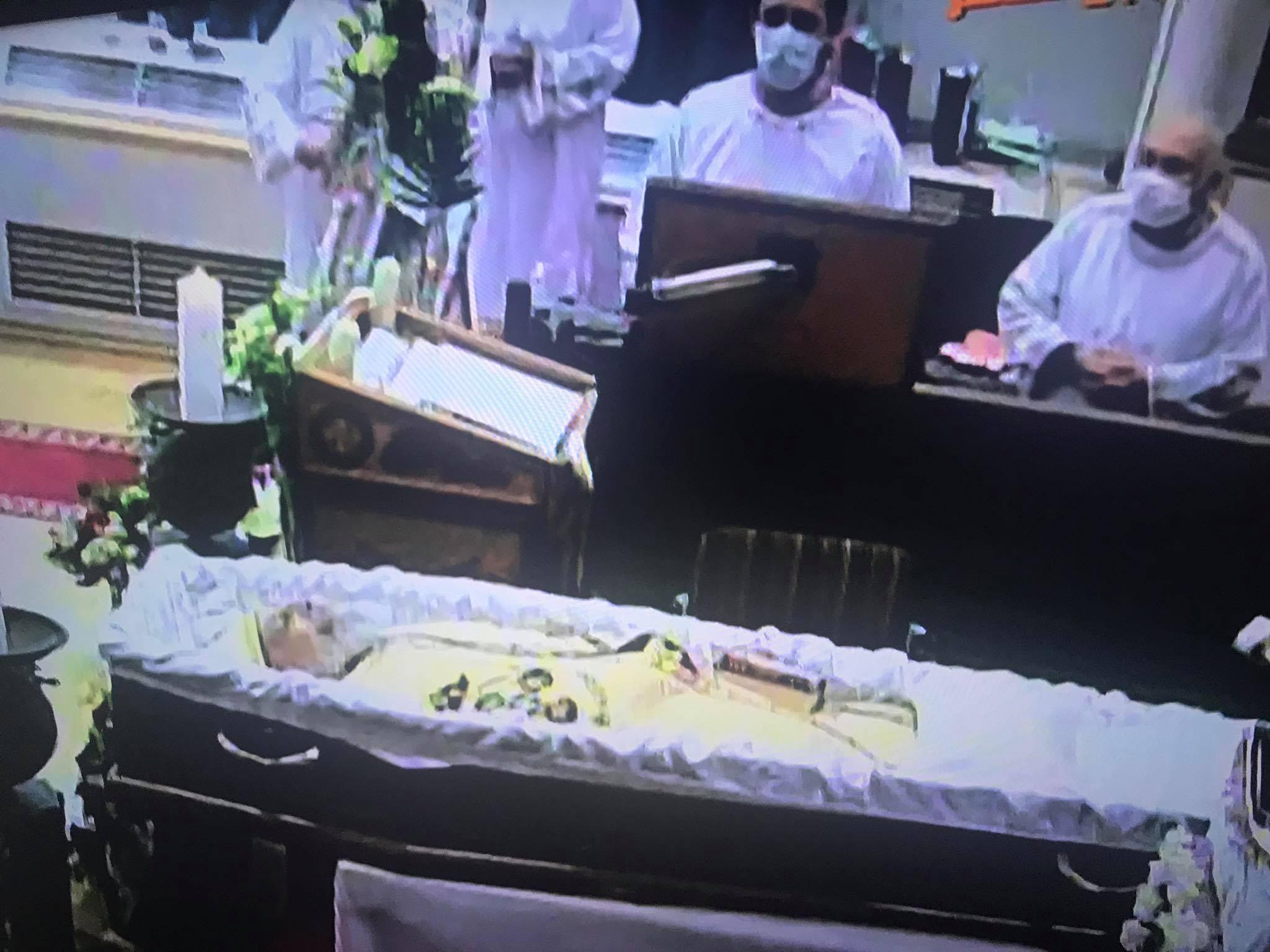 The body of Abouna Pigol was placed in the coffin in the church as Holy Mass was celebrated before the funeral that morning. Attending the service were Abouna’s brothers: Anba Demetrius from Mallawi in Egypt through video conference, and Fr Kyrillos from Florida through Zoom.

Anba Demetrius thanked Pope Tawadros for his heartfelt condolences and message of comfort to the family and Church. He thanked the Coptic bishops, priests, monks, and nuns, deacons, consecrated servants, and congregations in Egypt and in Germany for sharing in the grief for the departure of Abouna. 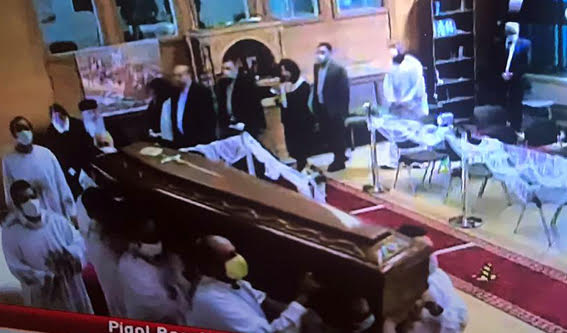 He also thanked President Abdel-Fattah al-Sisi and Minya Governor Usama al-Qadi, also all officials and Church figures in Egypt and in Germany for offering condolences to the Church and the family.

Abouna Pigol was aptly mourned by Anba Moussa, Bishop of Youth with the Bible verse: “Let the elders that rule well be counted worthy of double honour, especially they who labour in the word and doctrine” (1 Timothy 5: 17).

He was loving, gentle, humble and self-denying, kind, full of peace, always smiling, genial, welcoming to everyone in person and in his home with Tassoni Hatasso. A student of his said he taught love and humbleness without so much as ever talking about them, but by living them in person all those years. 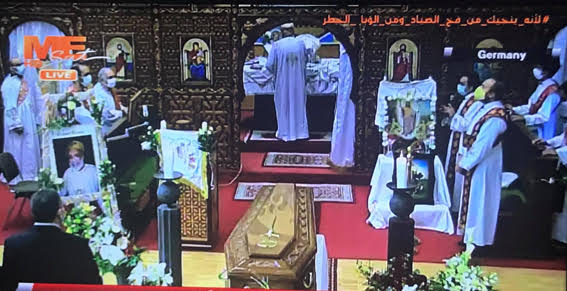 According to Dr Abdel-Malek, Abouna Pigol lived a calm life filled with the peace of the Lord. This carried him through all the difficult times, even the painful departure of his wife from this world. After a short, painful illness, he left our world to heaven where he is sure to hear the joyful voice of the Lord say: “Well done, good and faithful servant! You have been faithful with a few things; I will put you in charge of many things” (Matthew 25: 21). 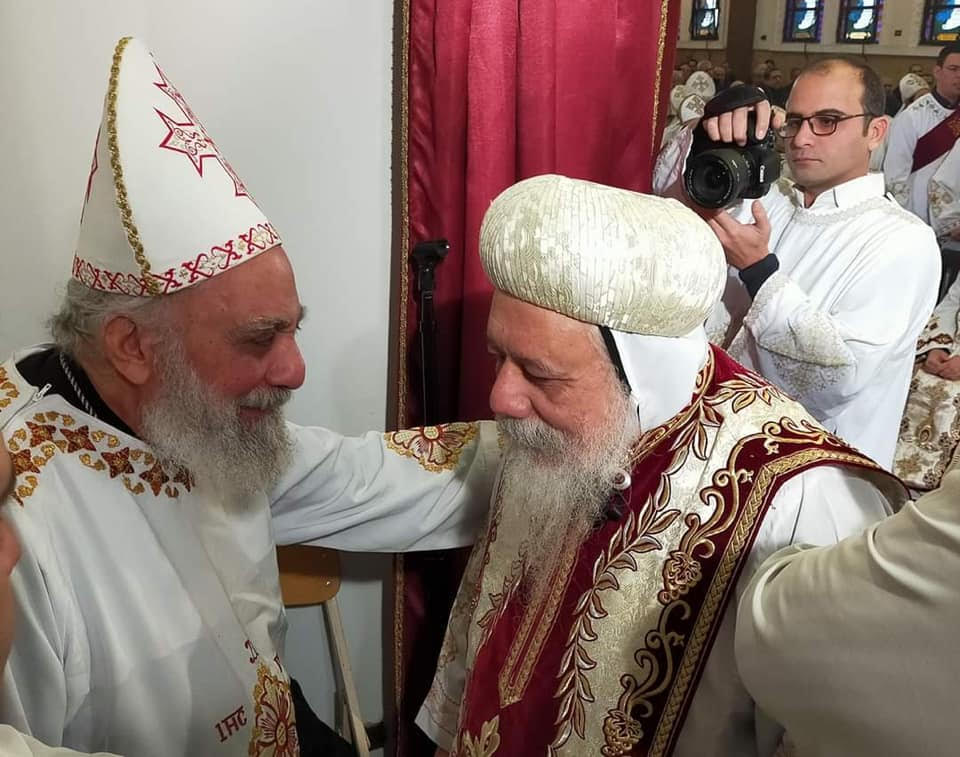 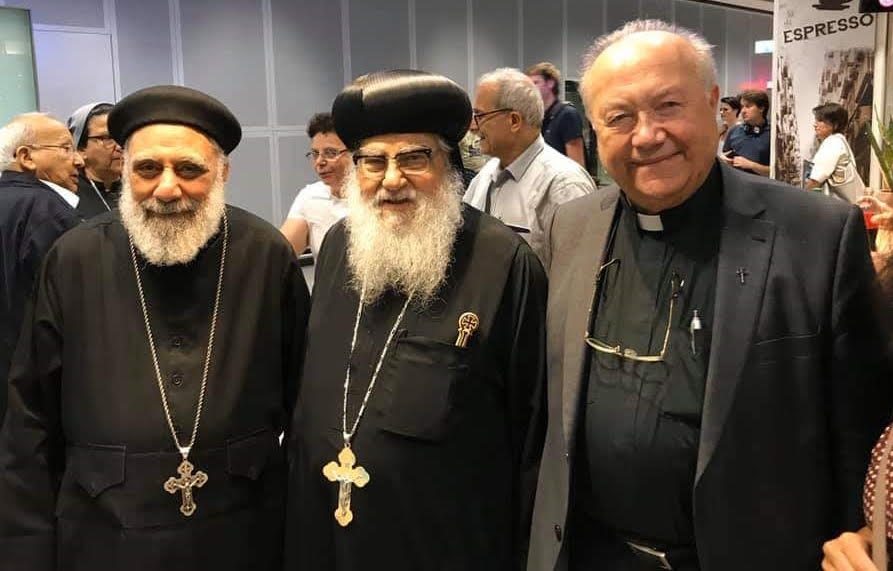 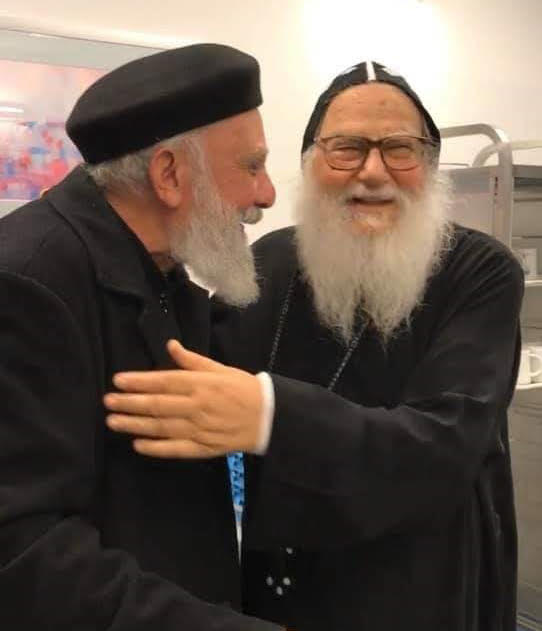 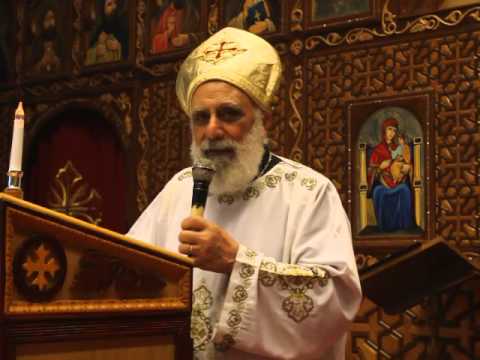