He was an ‘ordinary’ man. He lived in an ordinary home in an ordinary Cairo district, had a typically ordinary family of a wife and two daughters, held an ordinary job, frequented an ordinary cafe in Tahrir Square, and was used to have an ordinary early morning walk along the Nile bank near his home in Agouza, lingering to chat with ordinary street vendors or passers-by. Yet when he wrote, it was anything but ordinary. Naguib Mahfouz (1911 – 2006) wrote about ordinary people who lived in Egypt, people whose sentiments, whims, values, pains and struggles he understood so perfectly that his depiction of the essence of their lives and human predicaments was extraordinarily simple and extraordinarily profound. So much so that it would resonate with readers the world over. And for this, Naguib Mahfouz went on to win a Nobel Prize in Literature In 1988. But he remained the same extraordinary ordinary man and, for Egyptians, the man next door who was forever just “one of us”. 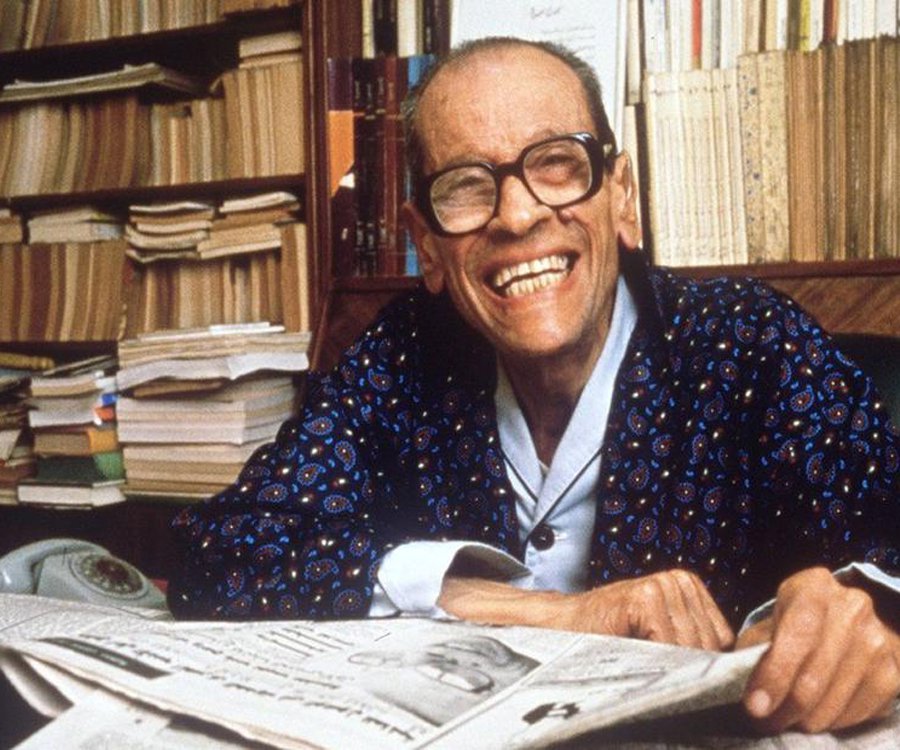 Upon awarding him the Nobel Prize, the Nobel Foundation described him as: “Naguib Mahfouz, through works rich in nuance—now clear-sightedly realistic, now evocatively ambiguous—has formed an Arabian narrative art that applies to all mankind.”

Egypt’s cherished novelist Naguib Mahfouz has been the focus of two recent Cairo events. One was transitory in nature: Mahfouz was the ‘Theme Character’ of the 6th International Cartoon Gathering that ran from 7 to 21 July at al-Amir Taz Palace In Cairo; whereas the other made sure the Nobel Laureate’s memory would always live on through the newly-opened Naguib Mahfouz Museum, at Bashtak Palace in the district of Tkiyet Abul-Dahab, Cairo. 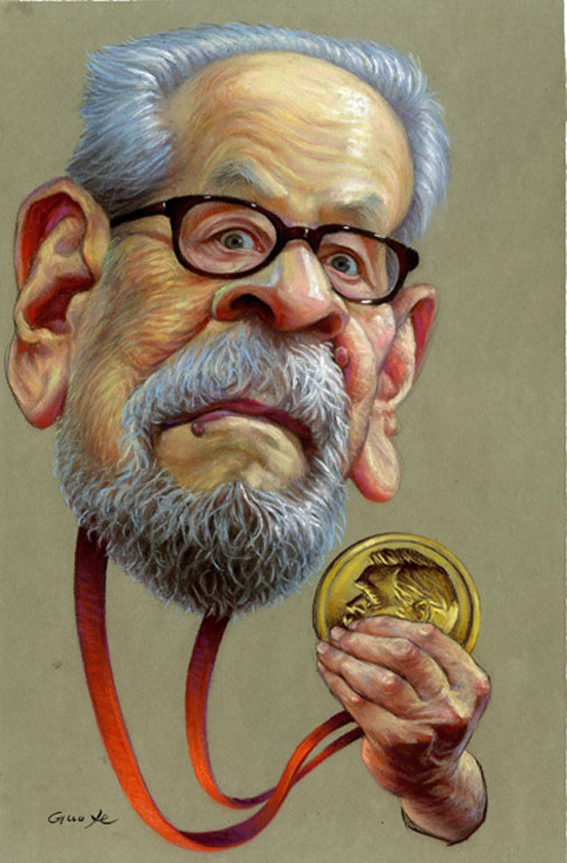 The Caricature Gathering is an annual event organised by the Cultural Foreign Affairs and the Cultural Development Fund, jointly with Minya University’s Faculty of Fine Arts, and the Egyptian Caricature Association.

This year’s event saw the participation of 420 works by 345 caricaturists from 76 countries, depicting Mahfouz through a profound reading of his novels, which was, according to Fawzi Mursi, coordinator of the Gathering: “an auspicious instance, since they didn’t depend on the writer’s images spread far and wide on the Internet. This is considered a ‘success and individuation’.” 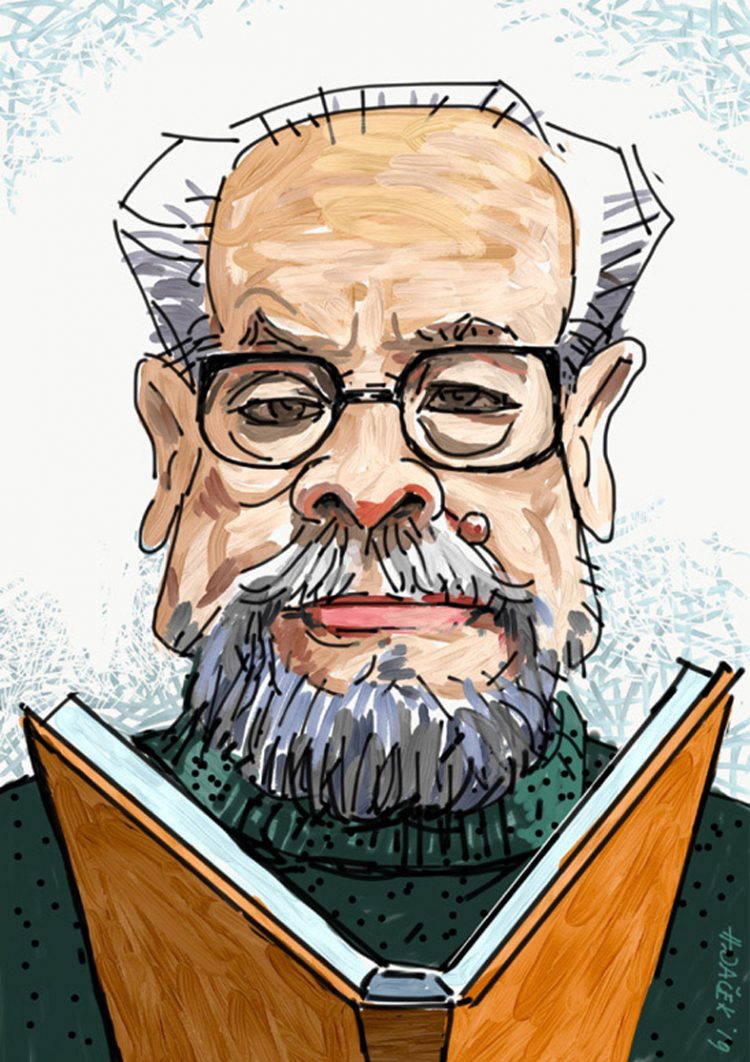 The Naguib Mahfouz Museum has been a long-awaited dream among Egypt’s literary and cultural circles.

The idea goes back to 2006, when a ministerial decree was issued by the then Culture Minister Farouk Hosny to establish a museum to commemorate Mahfouz, which would include his personal belongings and books, and which would eventually double as a centre for cultural activities. 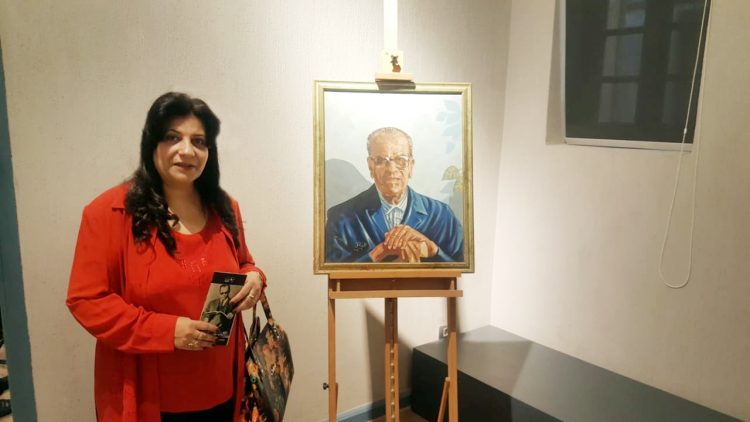 The project encountered several hindrances, however, and stalled altogether with the onset of the Arab Spring uprising in January 2011. The ensuing unrest, severe economic decline, and Muslim Brotherhood (MB) rule that was openly hostile to Mahfouz’s creative, liberal thought and works collaborated to halt the project.

When in 2013 Egyptians rose up in their 30 million-strong revolution against the MB and, backed by their Armed Forces to avert civil war, succeeded in ridding themselves of Islamist rule and established a secular State, matters began to look up for progressive culture. As the economy picked up, the project for a Naguib Mahfouz Museum was revived in 2016 at a cost of EGP15 million financed by the State. 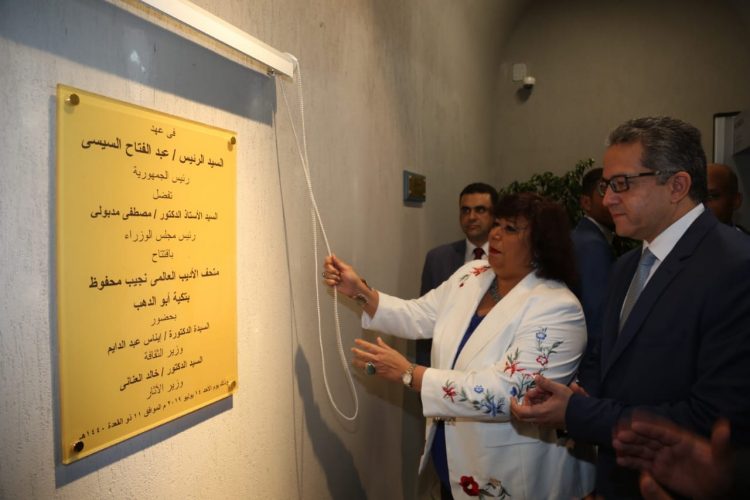 Finally, on 14 July 2019, Egypt’s Culture Minister, Ines Abdel-Dayem, opened the Naguib Mahfouz Museum at Bashtak Palace. She was joined by Cairo Governor Khaled Abdel-Aal; Minister of Antiquities Khaled al-Anani; veteran writer Youssef al-Quaied who is also the Museum director; Fathy Abdel-Wahab, Head of the Cultural Development Fund; Muhammad Abu-Seada, Head of the National Authority for the Civilisation Coordination (NACC); as well as a large number of intellectuals, writers, and ambassadors to Egypt. Fittingly, the opening paid homage to the 30 June 2013 Revolution.

“The Mahfouz Museum is an achievement and pride for all Egyptians,” Ms Abdel-Dayem noted, “especially given that Mahfouz is the ‘Icon of the Arab novel’.”

She announced that, to mark the opening, the Culture Ministry was offering five workshops on script-writing, and novel and short story writing, as well as up to 50 per cent discount on Mahfouz’s books sold at the Museum outlet. 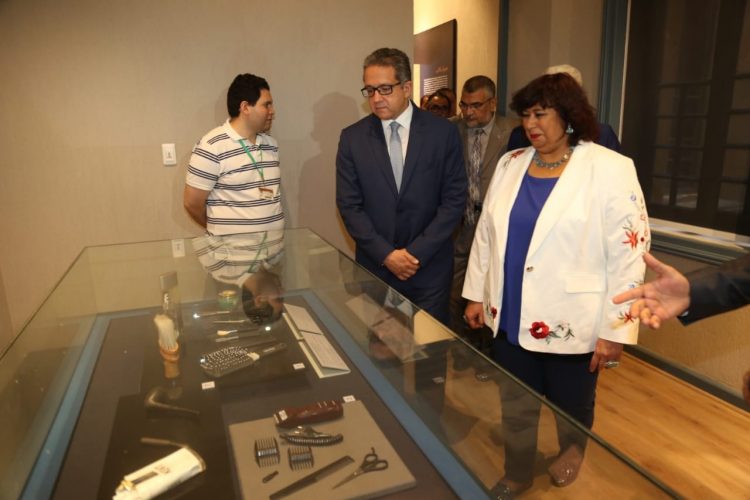 Ms Abdel-Dayem proudly noted that a mural had been set up facing the museum and depicting Mahfouz surrounded by the many minarets of Fatimid Cairo. That is an area teeming with life rich in folkloric tradition, which was a favourite setting for many of his novels. The mural was made by a number of young artists led by Soheir Othman, Professor at Helwan University’s Faculty of Applied Arts, and Coordinator of the Plastic Arts Commission at the Supreme Council of Culture.

Mr Abu-Seada talked of the NACC project to beautify the district of Tkiyet Abul-Dahab, which houses the Mahfouz Museum. He said the project is done in cooperation with Cairo Governorate, and includes giving the old, surrounding buildings a fresh coat of paint, and installing explanatory street signs to guide to the heritage buildings the district is rich in. The project also involves paving the roads and narrow alleyways leading to the museum, also planting trees and trying to find an adequate solution for parking vehicles.

He said it should be completed in no more than six months. 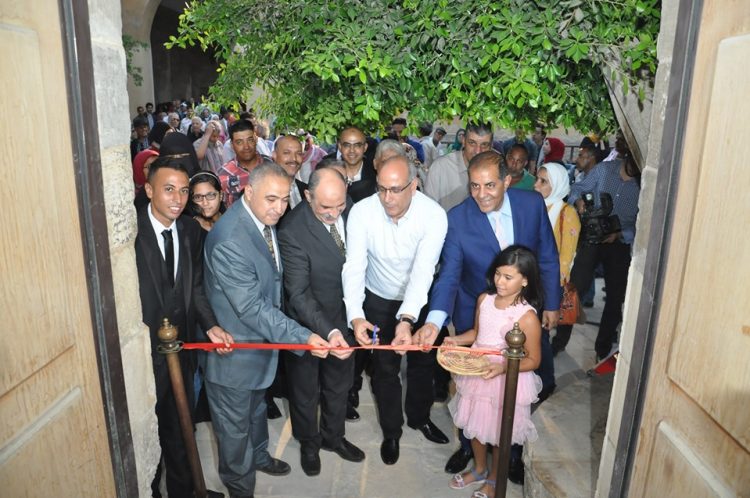 Dr Anani described the museum as a centre for cultural and intellectual enlightenment. “We are endeavouring to turn heritage places in Egypt into beacons of culture, as we did with Bashtak Palace here, turning it into this museum,” he said.

Bashtak Palace in Tkiyet Abul-Dahab is located in the district of the 10th-century al-Azhar Mosque. It was chosen to house the Mahfouz Museum because it lies in Bein al-Qasrein Street In the heart of Gamaliya, the site of Mahfouz’s birthplace and the scene of many of his novels. The neighbourhood, was central to his Cairo Trilogy: Palace Walk (Bein al-Qasrein), Palace of Desire (Qasr al-Shouq), and Sugar Street (Al-Sukkariya). The places Mahfouz mentioned in his novels and short stories later became tourist destinations. 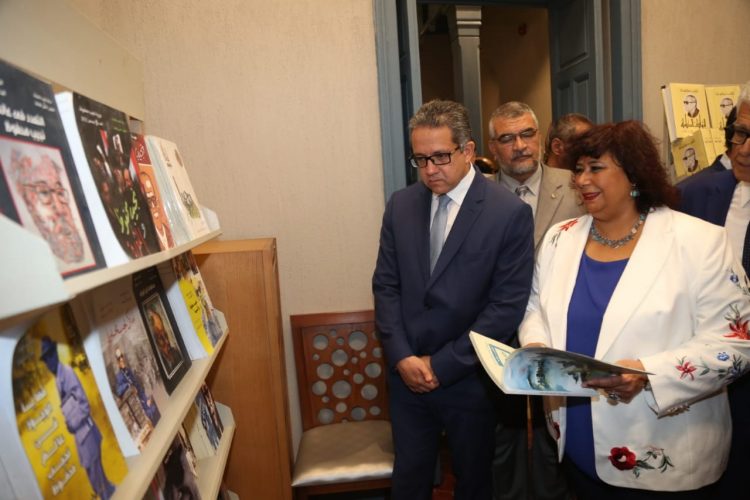 Tkiyet Abul-Dahab, is part of the heritage Abul-Dahab compound which includes a mosque, school, and tkiyyah (inn), and which was built in 1703 by Muhammad Bek Abul-Dahab. 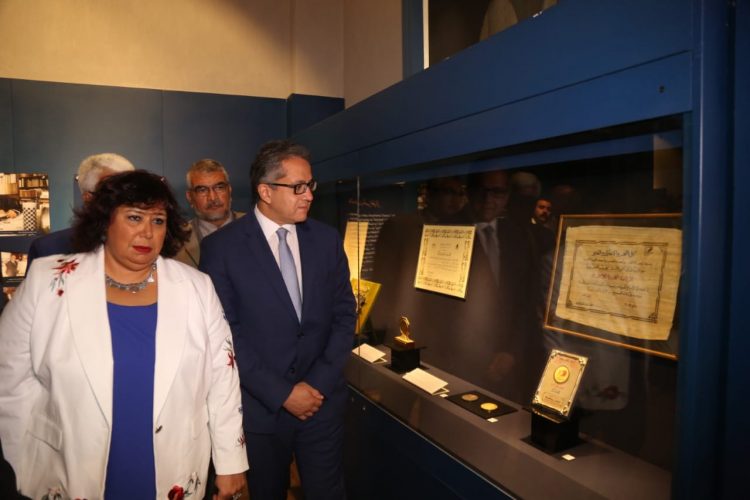 As to the Bashtak Palace, it has historical architectural significance. It was built in 1334 during the Mamluk era, by Prince Seif Eddin Bashtak al-Nasiri, an emir and son-in-law of al-Nasser Mohamed ben-Qalawun. After the sultan’s death, Bashtak was arrested in Alexandria and executed in 1341 A.D. The palace is renowned for the richness of its decorations and for its large number of rooms. It has three floors and three facades.[http://en.wataninet.com/archive-articles/museum-for-mahfouz/9399/]

On an area of 800sq.m, Bashtak Palace rises three storeys high. The ground and first floors have been allocated for the Naguib Mahfouz Museum, whereas the second floor is still under the Ministry of Antiquities’ Acquisitions Department. 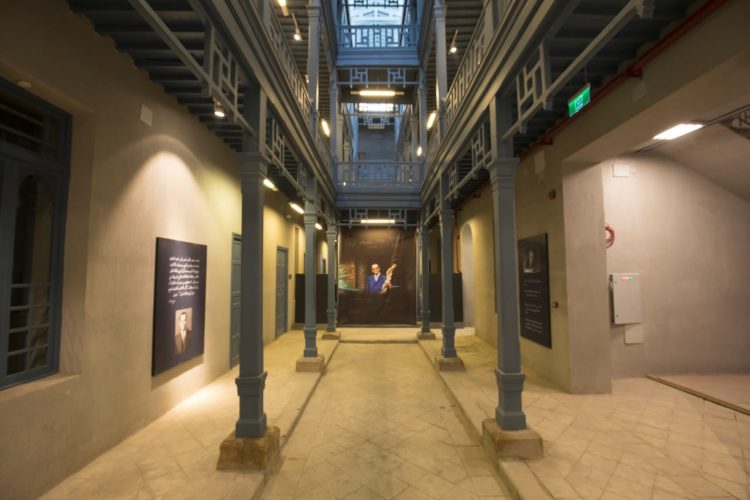 Upon stepping into the museum, visitors are greeted by a big image of Mahfouz in the middle of the courtyard, surrounded by a number of paintings scripted with quotes by Mahfouz and names of his novels.

The entrance courtyard is surrounded by halls with blue doors; these halls are assigned for seminars, a visual and audio library, a public library and a library for critical research and study of Mahfouz.

According to Karim al-Shaboury, who put up the museography, the museum reviews Mahfouz’s biography and writings from his early beginnings until he became a prominent writer. Each hall or gallery carries a name that bears special significance to Mahfouz’s life and works in order for visitors to have a sense of entering his world to re-discover historical Cairo on the human and heritage levels. 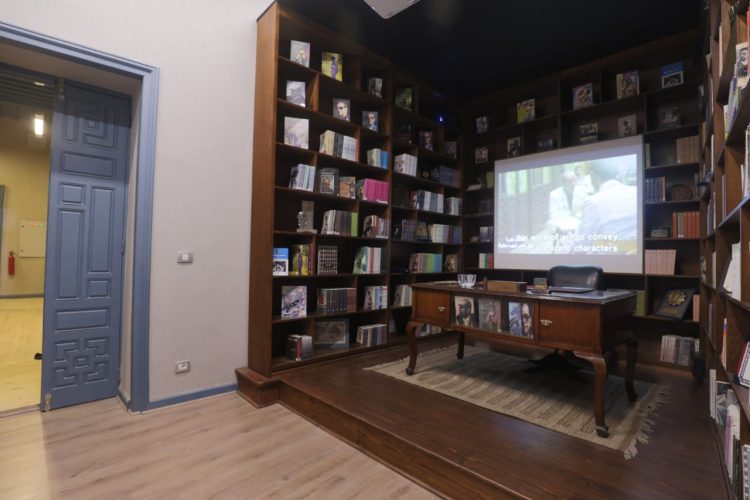 Al-Hara (The Alley) gallery focuses on Mahfouz’s liaison with the Egyptian alley which inspired a large number of his works. Another gallery, which bears the name Cinema, screens scenes from some of Mahfouz’s novels-turned-films. Asdaa’ al-Siera (Biography echoes), sheds light on a personal life of Mahfouz, displaying his belongings: his eyeglasses, pens, shaving tools, office carpet, wristwatch, handwritten texts, in addition to recordings of “Dreams of the Recovery Period”, extracts of dreams he narrated, after he survived an assassination attempt in 1994. 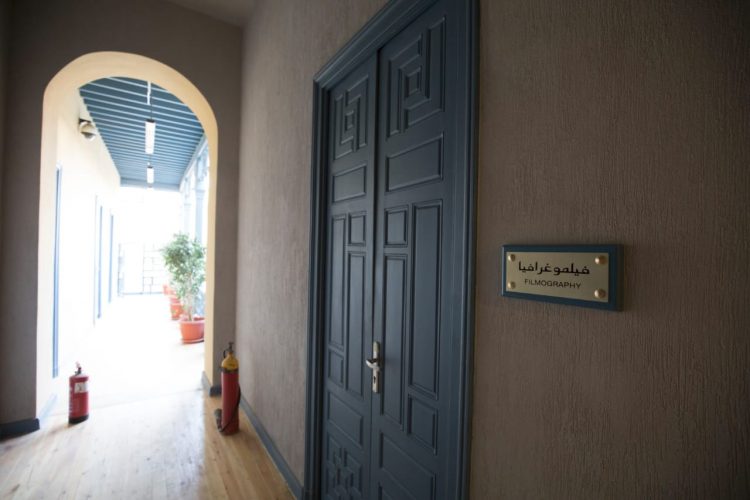 The Nobel Hall showcases his Nobel Prize certificate and a replica of the medal he received, at the centre of the hall. In this hall, the walls are made up of graphics displaying, Nobel Prize winners in Literature, over the duration of 117 years, ever since the prize was first awarded in 1901. The graphic walls also display the text of Mahfouz’s acceptance speech of the Nobel Prize, delivered on his behalf by his follower and friend, writer Muhammad Salamawi. Mahfouz himself never attended the ceremony; his two daughters, Fatma and Umm Kulthoum, received the prize for him. 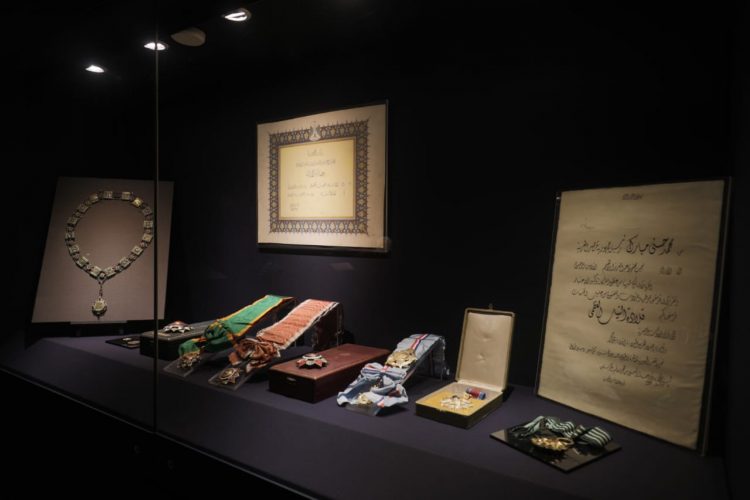 Ms Abdel-Dayem, invited all who had books signed by Mahfouz to donate them to the Museum to further enrich its collection.

Mahfouz’s daughter, Umm Kulthoum, attended the Museum opening and expressed her pride and joy at the unsurpassed tribute to her father. Umm Kulthoum donated her father’s famous coat to the museum to be displayed together with all the other personal belongings of Mahfouz, which she had given the museum before. 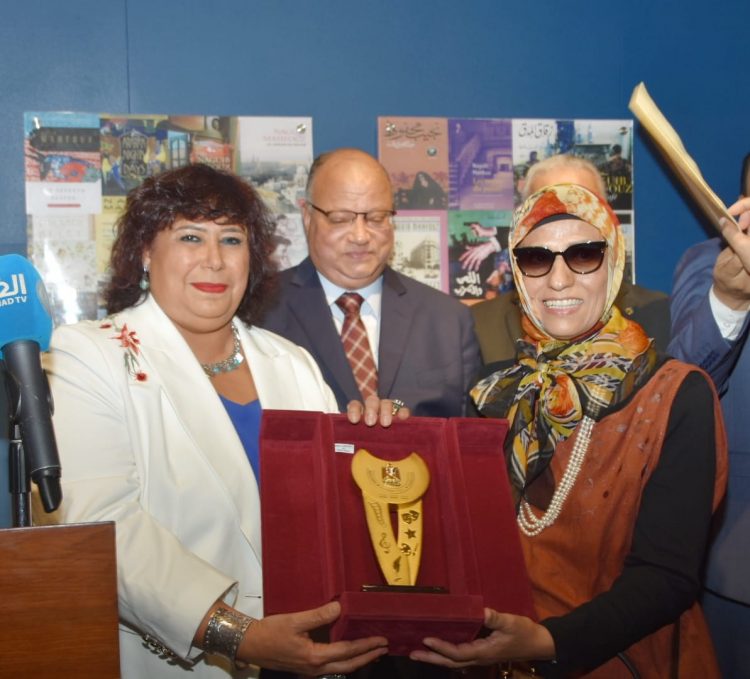 Neil Hawkins, Australia’s ambassador to Egypt back in 2015, said that he was influenced by Mahfouz’s novels which he read in English, describing them depicting the typical Egyptian personality. “The Importance of Mahfouz’s museum,” Ambassador Hawkins said, “lies in introducing Egypt’s contemporary history. It is a great paradox realised by Egypt: blending present with past by choosing an old historical building, to establish a museum of a global contemporary novelist.” 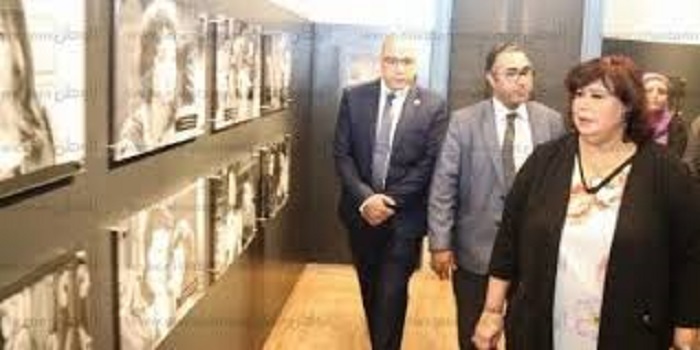 Naguib Mahfouz is an iconic prolific Egyptian writer who started his writing career in the 1930s. He is famous for best depicting mainstream Egyptian characters and day-to-day life. In addition, some of his novels are set in ancient Egypt whereas others, written during his later years, tackled more philosophical issues through short glimpses of daily life. Many of his works have been turned into films, making him probably the writer with the most novels-turned into films to his name. 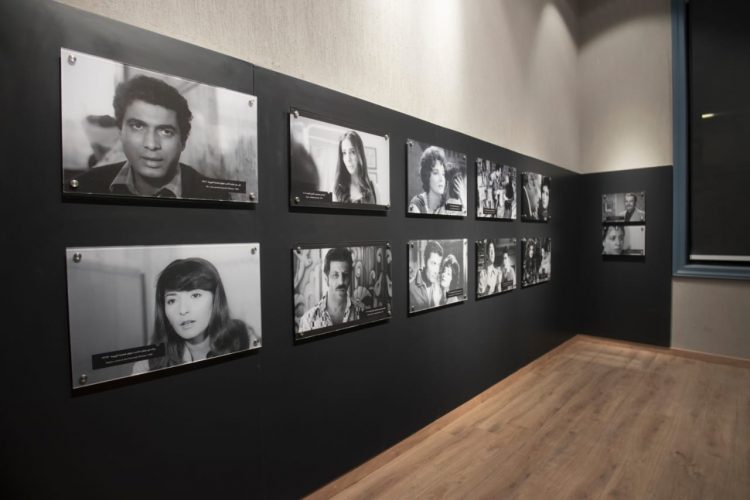 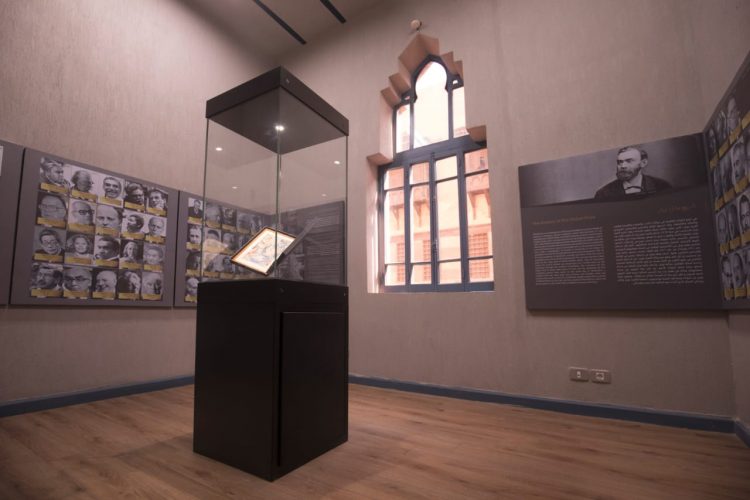 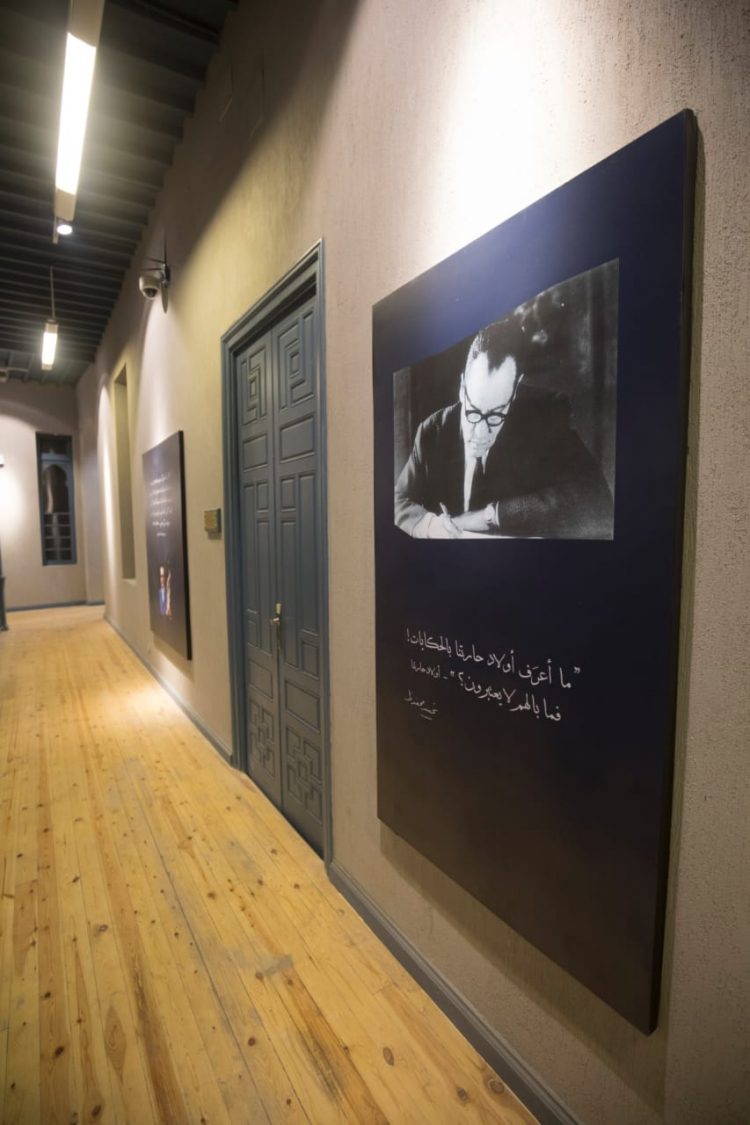 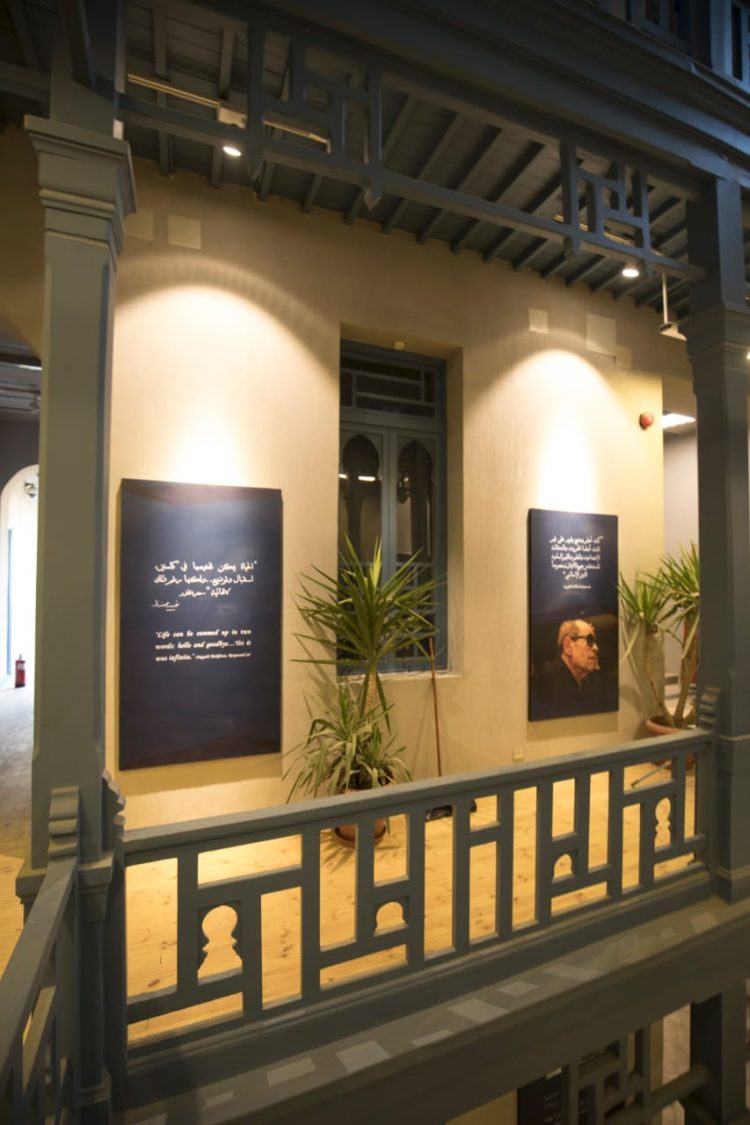