It was spectacular by all accounts. The opening ceremony of the 32nd edition of Total 2019 Africa Cup of Nations (AFCON) at Cairo Stadium on 21 June could only be described by the media and social medial in superlatives: legendary, magnificent, fantastic, brilliant, dazzling, stunning … you name it!

It was a breezy Cairo evening and Egypt was, for a record fifth time, hosting AFCON, the biennial international men’s football championship of Africa, organised by the Confederation of African Football. The seats of Cairo Stadium, which accommodates some 75,000 spectators, were fully occupied by men and women, young and old, almost all in donned in the national team’s red. Their tickets had been booked online; that was the only way tickets for any event in the tournament could be bought. Organisation and order were first rate and, despite the long wait for the start of the ceremony, the excited cheering and singing warmed up the masses for what was to come.

President Abdel-Fattah al-Sisi attended the opening and was given a warm welcome by Ahmad Ahmad, head of CAF, and by the spectators. He officially launched the championship.

The theme of the 17-minute opening ceremony had to be Egypt and Africa and, not surprisingly, showcased the pyramids, the Nile, and Africa’s colourful culture. The performance and laser show were magnificent, brilliant, replete with music, lights and fireworks, the tannoura Sufi dance, African patterns, and the flags of African nations spotlighted on the sides of the pyramid. The show concluded with the official AFCON song, “We’re gathered together” sung in Arabic, French, and English by the Egyptian Hakim, Nigerian Femi Kuti, and Ivoirian Dobet Gnahore. The words say: “If a hundred things keep us apart … football gathers us together … We’ve played it in our streets, homes, and schools … We’re gathered together for a great dream, for love and good … Our dark-skinned children are here together, hand in hand, from everywhere in Africa … Oh ho Africa, Oh ho Africa”. As the laser lights transformed the pyramid into the AFCON symbol the audience cheered in exultance. 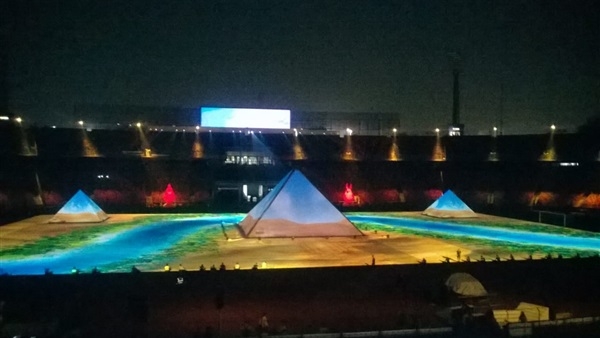 The first match was then played between Egypt and Zimbabwe, the 14th time they play against each other; Egypt had won eight matches, Zimbabwe two, and four matches had ended in a draw. The AFCON match ended with an Egypt win 1 – 0.

Egyptians were especially appreciative of the fact that it had taken a mere five months for the dazzling show to materialise. 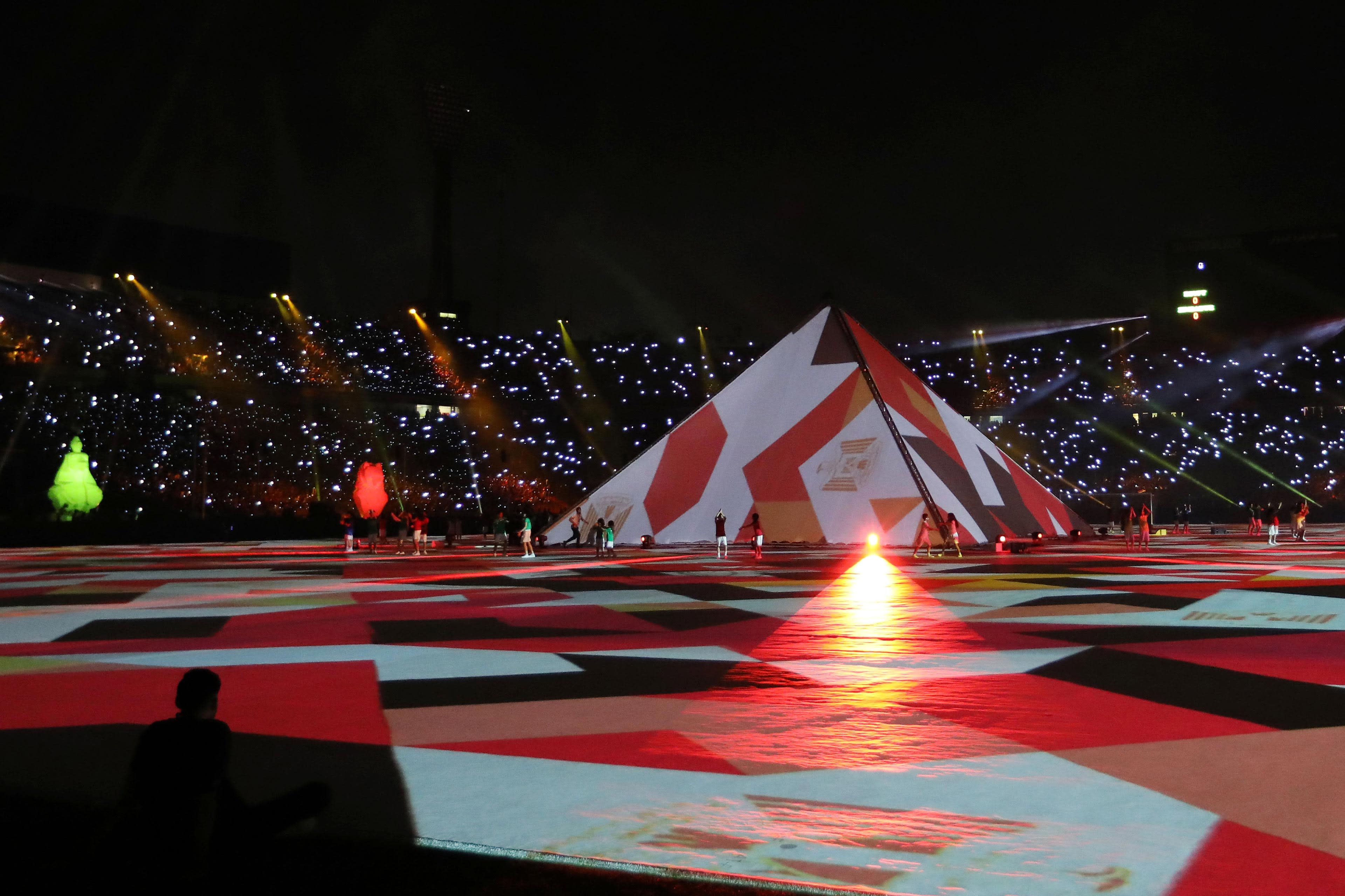 The tournament had been initially scheduled to be hosted by Cameroon but, on 30 November 2018, Cameroon was stripped of hosting it because of delays in delivery of infrastructure, and insecurity because of Boko Haram. On 8 January 2019, CAF chose Egypt to host AFCON.

On 19 May, King Tut, the footballer Pharaoh, was unveiled as the official Mascot for 2019 AFCON.

In Coptic: We love Egypt

Among the banners held by the fans in the opening match was one which drew special attention. On the tri-colour Egyptian flag, each strip of red, white, and black held one of the phrases “We love Egypt” written in Arabic, Coptic, and English. 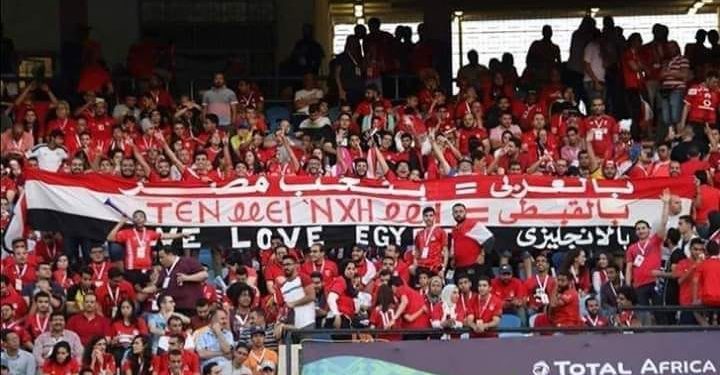 Watani’s Antoun Milad set out to find the person behind the idea of using Coptic on the banner. It was a young Copt named Tony Alfred whose career is in marketing. Alfred told Watani that, once he had bought his ticket for the opening ceremony, he met with his friends who would also attend the match and contemplated what to do to make their cheering special. “We came up with the idea of using Coptic in addition to Arabic and English,” Alfred said. He said many fans liked the idea very much, and children came to have a selfie at the banner. “At the entry gate,” he said, “the security men asked us about the banner, and were interested when we told them it carried a message in the language of ancient Egypt.”

Once the opening match between Egypt and Zimbabwe ended and fans started exiting the stadium, Watani’s Irene Saad spotted a group of young people begin to distribute themselves among the seats and start cleaning up the debris. 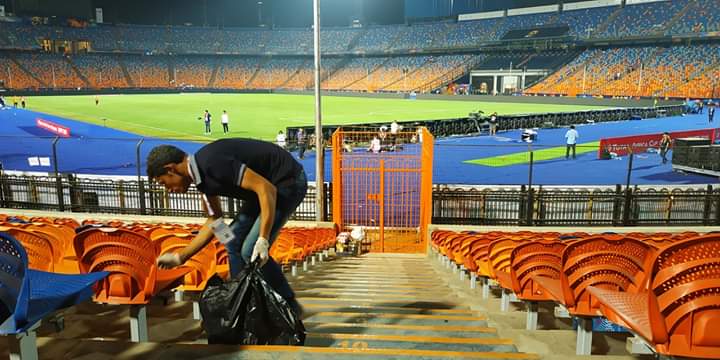 They had armed themselves with garbage bags, but the surprise was that many other youngsters eagerly came to their help, just asking if there were more bags. Muhammad al-Ayouti, the young man who had spearheaded the clean-up initiative, said he was very pleasantly surprised; he had not expected the idea to gain such momentum.

The AFCON Health Committee decided that, in view of the hot weather, matches would be halted twice every half, for three minutes each, for the players to refresh themselves and quench their thirst with water and juice. Medical teams from Egypt’s Health Ministry were on hand at the various stadiums to offer first aid to fans when needed, and refer those who require hospital care to the nearest hospital.

According to Watani’s Georgette Sadeq, the most common complaints treated by the medical teams were difficulties in breathing, pain in the chest or abdomen, and stomach hyperacidity. On the first day, 101 cases were treated, and 10 moved to hospital. 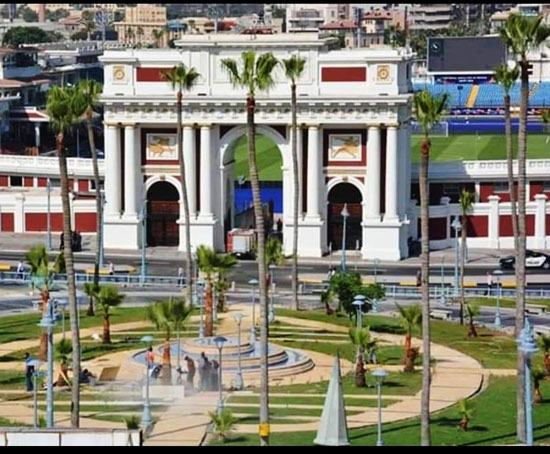 Cairo, Alexandria, Suez, and Ismailiya each mobilised efforts to prepare the stadiums and beautify their surroundings and the roads leading to them. Roads were revamped, signs repainted, and trees and plants taken care of. The stadiums were fitted with new, state-of-the-art power-saving lighting systems. In Suez, the local National Council for Women (NCW) pitched in with the cleaning and beautification efforts. When the Angolan team arrived at the city, Suez welcomed it to music of its traditional musical string instrument, the simsimiya.

Once all the African teams had reached their final destinations, Hany Abu-Rida, head of the Egyptian Football Union, insisted on taking a souvenir photograph with the security officials who had been in charge of securing the arrival of the teams, expressing his appreciation of their efforts. 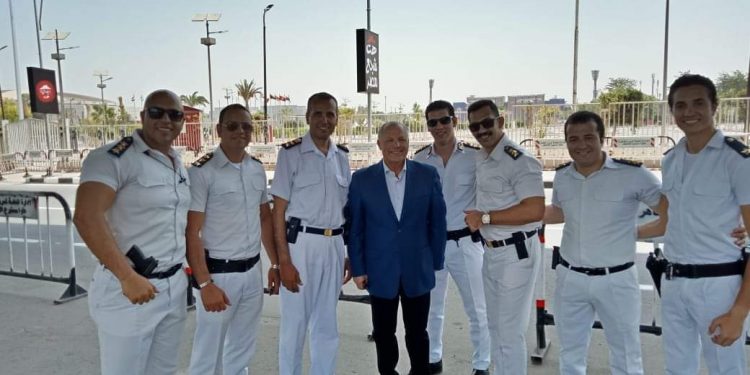 In remote regions in Egypt, such as the Western Desert oases governorate of al-Wadi al-Gadeed, local governments placed giant screens in squares and public venues for the people to follow the championship. According to Watani’s Fouad Saad, Muhammad al-Zamlout, Governor of al-Wadi al-Gadeed, watched the opening ceremony with fans at the giant screen on the tourist promenade in the town of al-Kharga.

Amid the excitement and fanfare, Egypt’s National Council for Women was not blind to the risk of harassment in the midst of the huge crows. The NCW assigned the hotline 15115 to receive complaints of harassment. No figures have yet been released on complaints received. Watani’s Angele Reda says that Maya Morsy, head of the NCW, has called upon women and girls to send over photographs of themselves, their friends, and their children at the games in order for the NCW to post the photos on their official website. 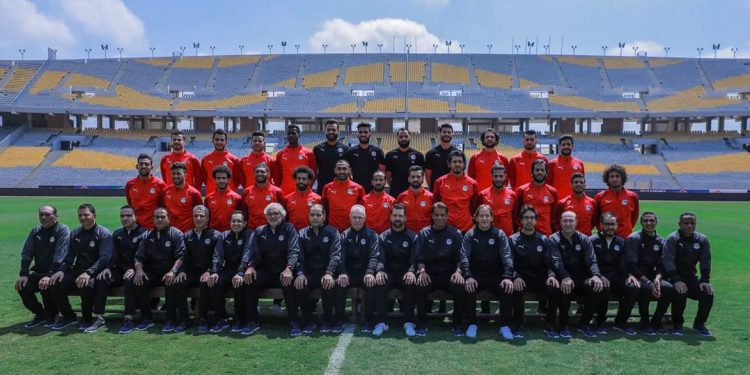 Egyptians hold high hopes of winning the cup, especially given that their team is playing on its own turf and amid its fans. If the Egyptian team wins, it will be for the eighth time, setting a new African record. The last and seventh time Egypt won the Cup was in 2010. 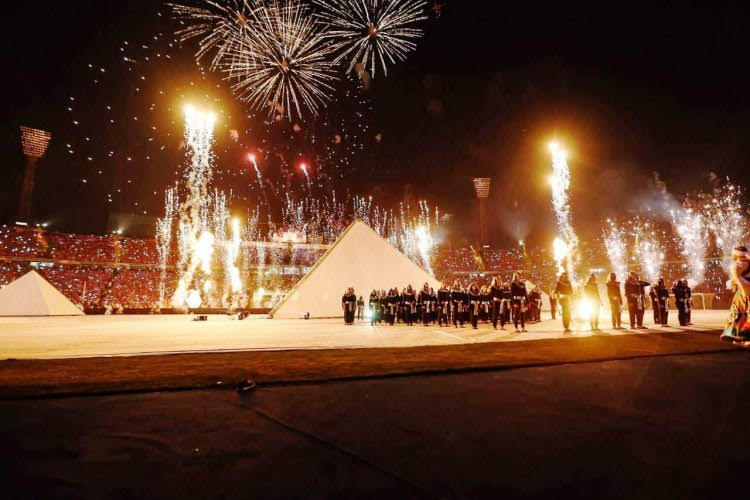 Patooh Gichini posted: “Credit to Egypt for such a well organised experience. World class!” Pye Waw wrote: “AFCON event in Cairo absolutely sensational”. For Gikundi Mugiira, it was: “Hello Universe, take a bow! This is Africa! Egypt made us proud. We are all feeling present in Cairo” 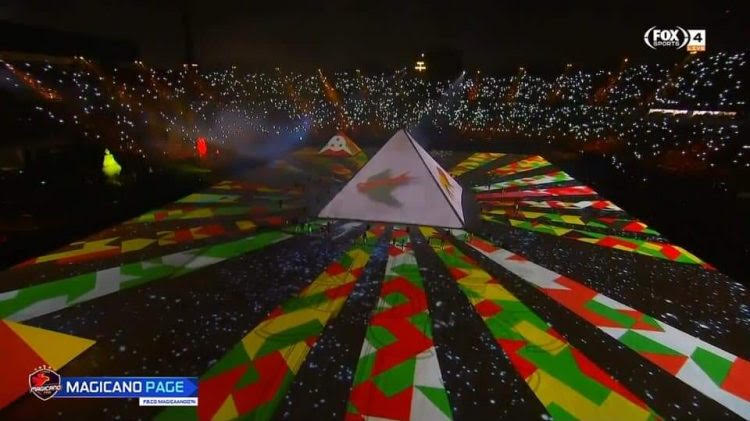