Last week, Egypt’s Muslims celebrated Eid al-Adha, the sacrificial feast that involves offering animal sacrifices. Upper Egypt villagers, however, complete the sacrificial rites after the Eid dawn prayers on the first day of the four-day feast, then use the leisure time to hold a time-honoured ceremony close to their hearts. They revive a tradition that goes back to ancient Egypt: Tahtib. All through the four days of the feast, the villagers gather in the afternoon in the village square or in a wide open space, and sit on the ground forming a large ring. The men take turns in getting up in twos or in small groups and walking into the middle of the ring where, to the sound of traditional music, they face one another in the stick dance of Tahtib. The games go on till sunset when the crowd disperses till the following day for a new set of games to start.
Tahtib, a festive and martial art, has now been added to UNESCO Representative List of the Intangible Cultural Heritage of Humanity. The man who takes credit for this achievement is Adel Boulad.

It is not easy to guess his age. Despite his 66 years, his face beams with a radiant joie de vivre that hides the signs of the years on his face. There is probably no better way to describe him than the expression ‘forever young’.
Adel Boulad is the father of Modern Tahtib (pronounced Tahteeb), the newest version of the Egyptian stick-fighting martial art that was also the origin of the Egyptian stick folk dance.
Tahtib as a martial art goes back 5,000 years, and both the festive and martial branches involve physical and mental alignment. The rules of the martial art were engraved at Abu Sir as far back as the Fifth Dynasty (2467 – 2323BC), while the festive form of Tahtib was recorded in the New Kingdom (1550 – 1070BC) on walls at Luxor and Saqqara. The harmonised energy of the martial art evolved over time from ancient sparring techniques and rhythms, but is now at risk from Egyptian urbanisation and separation from its rural roots. A file was lodged with UNESCO to have Tahtib recognised as a typical and authentic Egyptian art with a cultural and societal value that needs to be protected. Boulad takes credit for being the person responsible for adding Tahtib to UNESCO’s Representative List of the Intangible Cultural Heritage of Humanity. 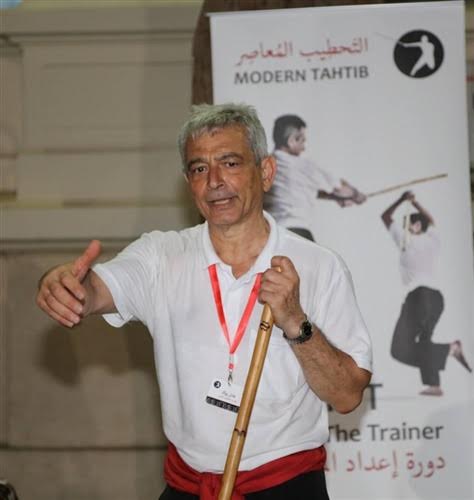 Man made of steel
Adel Boulad was born in the Suez Canal city of Ismailiya in 1951; his father Raouf was the financial manager of the Suez Canal Company. The Boulads were a Greek Catholic family from Damascus, renowned throughout the Middle East during the Middle Ages for the production of steel swords; their name derived from the Arabic word for steel, foulador foulath. In the 16th century, the family business shifted from steel to the production and trade of silk. In the wake of the massacres of Levantine Christians at the hands of the Druzes in 1860, several members of the Boulad family fled to Egypt where they established a cotton factory and trade; later on, the second and third generations of Boulads became engineers, lawyers and businessmen.
Boulad obtained a Ph.D. in physics from the University of Paris Diderot (Paris VII) in 1976. From 1978 to 2001 he worked in the field of technology as manager and team leader with a multicultural executive team in the Compaq and Cisco Systems. In 2001 he established his own company, PLI, specialising in leadership training for executives.
Before his interest in Tahtib, Boulad received extensive training in martial arts. While studying at Paris VII, he earned his first black belt in Karate from the renowned Master Mitsusuke Harada, and went on to be a Karate instructor at the university’s sports association. He also became a licensed martial arts instructor in 1976 after earning the State certificate in Judo, Aikido, Karate and martial arts. Brevet d’État de professeur de jùdô, aïkidô, karate et méthodes de combat assimilées). 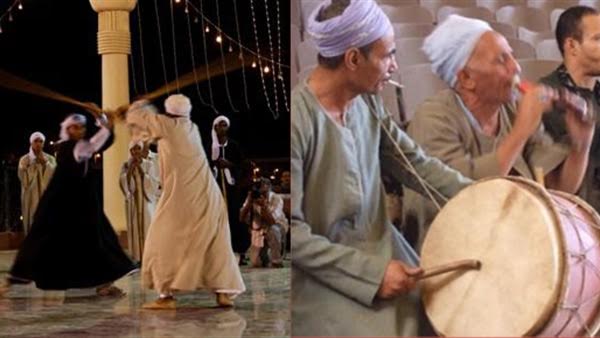 Training with the masters
Early in 1976 Boulad set up Association Seiza, a non-profit organisation aiming to promote the practice of multidisciplinary martial arts, especially the Japanese arts of Karate, Aaikido, Iaido, and Bojutsu. He trained in Aikido in Paris under Master Itsuo Tsuda from 1979 to 1983, then with Master Nobuyoshi Tamura’s group in the French city of Aix-en-Provence from 1991 to 1999. Boulad also continued to improve his Karate skills under masters Tetsuji Murakami and Hirokazu Kanazawa. His long years of training in Karate are apparent in the graceful and swift movements of his body during his martial arts performance.
Boulad’s interest in martial arts started at a young age in his hometowns of Ismailiya and Port-Said, where he focused mainly on wrestling and Judo. At the time Tahtib did not appeal to him because he considered it a form of folk art or dancing, but did not appreciate the combat side. In 1999, he met Shukry Muhammad, a Tahtib practioner from Nubia, who explained to him the origins of the art and its meaning. He started training with Muhammad in 1999 and. in 2005. he began touring regions in Upper Egypt where Tahtib was still practised, training with many practitioners of Egyptian Tahtib including Dakhli al-Sayouti and Muhammad Abdel-Razeq from Minya; Hussein Ahmed Mahmoud Hassan and Saad Salem Ali Rayan from Sohag; Ahmed Ali Youssef from Suez; and Mahmoud Mansour from Luxor. 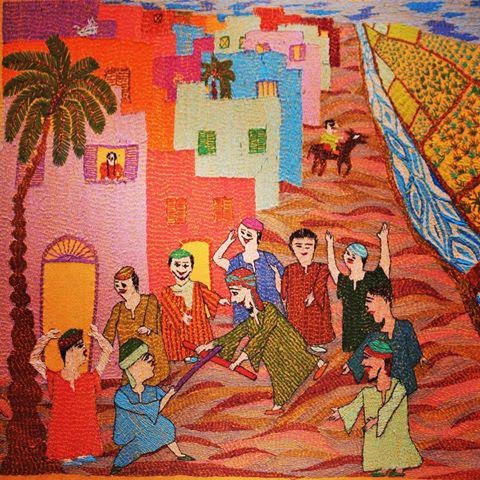 Foundation of Modern Tahtib
With his group in the Seiza Association, Boulad laid the foundations for the new martial art called Modern Tahtib in 2013 / 2014 after ten years of research and study in Upper Egypt and giving many performances in Egypt and France. His book Modern Tahtib: Egyptian Baton Martial and Festive Art was published in both English and French in September 2014. To promote the art of Tahtib in Egypt and abroad, he also published a booklet in Arabic and English titled The Art of Tahtib: a Trainer and Trainee’s Guide
Modern Tahtib was granted special importance during the 2016 International Martial Arts Festival in Bercy, France, when Boulad’s team had the honour of presenting the closing performance. In August 2016, the Egyptian Ministry of Youth and Sports asked Boulad to write a curriculum for Modern Tahtib to be taught at the Faculty of Physical Education, Helwan University.
On 30 November 2016, after six years of hard work and struggle with red tape, Modern Tahtib was inscribed on the UNESCO’s Representative List of the Intangible Cultural Heritage of Humanity during UNESCO’s General Assembly meeting in Addis Ababa. Boulad had been working on the project since 2011 and toured all the villages of Upper Egypt to complete the file to be presented to UNESCO. He worked with the Association of Upper Egypt for Education and Development (AUEED) and obtained the formal approval of Egypt’s Ministry of Culture to execute many initiatives throughout Egypt and abroad to safeguard this ancient heritage as a peaceful art for everyone. 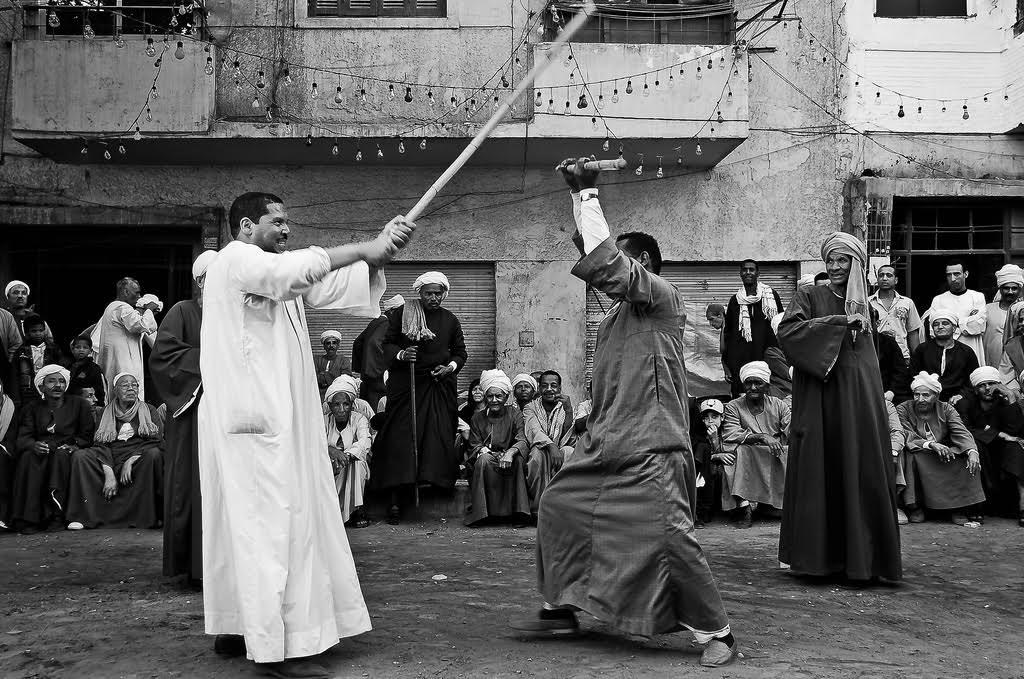