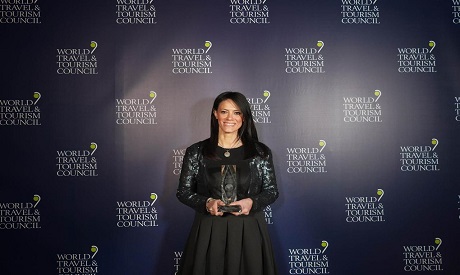 A statement by WTTC said that Ms Mashat was given the award for her country’s work on promoting tourism resilience.

A press release by the WTTC said: “The tourism sector of Egypt has, Mashat, led a robust recovery after receiving a big hit in 2011 [the year of the Arab Spring]. In 2018, Egypt’s travel and tourism sector continued its impressive growth at 16.5 per cent, according to WTTC data, ahead of the global average of 3.9 per cent.

“This growth has been linked to the hugely improved security infrastructure, which has helped to attract international visitors back to Egypt’s shores, and has allowed major global travel companies to restart operations in popular destinations and increase their business in new tourist developments on the coasts of the Red Sea and the Mediterranean.”

Ms Mashat said that the Egyptian Ministry of Tourism has adopted a new approach, the Egypt-Tourism Reform Program (E-TRP), to modernise the sector by implementing structural reforms that strengthen Egypt’s competitiveness and are in line with international standards, according to the WTTC statement.

“This is just the beginning for #Egypt, the future forefront of tourism,” Ms Mashat said.

“The annual WTTC Global Champion Awards recognise outstanding public officials or countries who, through their leadership, have made a difference through pioneering public policies and initiatives that have increased the competitiveness of the sector within their respective countries,” the WTTC says.

Incidentally, President Abdel-Fattah al-Sisi recently received an award from the UNWTO for his commitment to tourism and its contribution to the country’s 2030 agenda for sustainable development.