The restoration work taking place at al-Gilf al-Kebir, the mountain cliff located at Egypt’s remote southwest border, which features prehistoric cave painting, was the topic presented in a recent event organised by the Italian Archaeology Centre at the Italian Cultural Centre in Cairo. The speaker was Barbara Barich, member of Istituto Italiano per il Medio ed Estremo Oriente (ISMEO) and member of the Italian archaeological mission at Farafra in Egypt’s Western Desert.

Ms Barich explained that Gilf Kebir, literally the Great Cliff, is in the main part a sandstone rocky formation that includes rock paintings and a variety of plant and animal life. She said the project of restoring and preserving the rock paintings was conducted by the Italian Mission in Egypt under supervision of Rome University. It started in 2010, its main focus being Wadi Soura, the large pathway on the western side of the cliff.

Damaged by natural or human factors

Ms Barich pointed out that the ancient rock paintings in that region were painted on a fragile layer of sandstone. Many of them, she said, were damaged or destroyed by natural factors such as winds and earthquakes, also by human activity of travellers and tourists during the last twenty years, including traffic of modern vehicles on the old road near the caves.

The restoration work, according to Ms Baruch, is conducted in three locations: the cave of swimmers which was discovered by László Ede Almásy in 1933, and which gets it name because of its depictions of people in swimming-like positions; the cave of archers which features persons with bows and arrows; and the Cave of Foggini Mestekawi, called Wadi Soura 2 by German explorers, Cave of the Cattle by the French. It is named after the Italian explorer Massimo Foggini, his son Jacobo, and the Egyptian Colonel Ahmed al-Mistkawi, pioneer of Western Desert exploration. The three caves are close; the caves of the swimmers and archers who are only a few metres away from one another, and a small distance away from the Foggini Mestekawi Cave.

“The paintings in two caves of the swimmers and Foggini Mestekawi depict a wild environment,” Ms Barisc said. “As for the archers’ cave, we found drawings of herds, and this indicates a time span between the paintings. According to the chronological studies carried out by the Germans, it is possible to date the two first caves between 6500 and 4300 BC, and the archers’ cave between 4300 and 3500 BC. This probably implies a turning from a hunter-gathered community to one in which animals were domesticated.”

For sheer grandness of a landscape it is hard to beat al-Gilf al-Kebir (The Great Cliff). Little known and quite off the beaten track, Gilf Kebir lies on Egypt’s southwest frontier close to the borders with Libya and Sudan. Some 720 kilometres from the Nile and 960 kilometres from the Mediterranean, the Gilf extends over 7,770 square kilometers.

It would take a traveller from Cairo some 17 days to reach the Gilf; 14 days at least are needed to cross Gabal Uwainat (Uwainat Mountain) and three more to reach Gilf Kebir. The least trip into the Gilf would need nine days, but the experts recommend some three weeks to truly savour the beauty and wealth of the place.

The sides of the ancient flat-topped limestone plateau, the Gilf, are now heavily eroded and penetrated by huge sand wadis (valleys) and incredible dune systems which, at one point, rise 300 metres to meet the level of the plateau. The wadis, which extend into the desert around the Gilf perimeter, were formed by water erosion in a wetter phase thousands of years ago in the late Tertiary age. Then it was a great divide, draining water in all directions, north, south, east and west. That sand is whitish. The sand at the middle of the plateau is reddish. Wadi Hamra, as its name states, is filled with red sand. 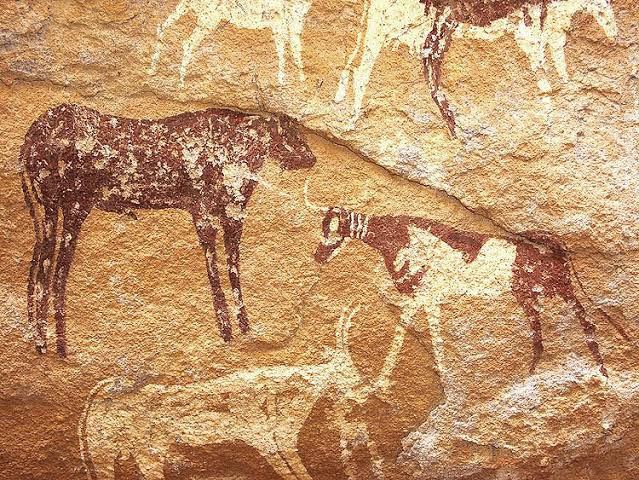 Amid this most awesome of natural settings is located unquestionably one of the richest storehouses of prehistoric rock art in the world at sites dating back to more than 8000 years. Not only paintings were found, but also engravings for which the sandstone rocks provided suitable surfaces. The scenes of pastoral life must have been generated after 6000BC, the generally accepted time for the appearance of domesticated cattle in the area.

The Cave of the Swimmers is the most famous, but new discoveries continue to emerge; the Foggini-Mestekawi Cave was discovered as recently as 2002.

It is now thought that the original inhabitants who created this stunning rock art influenced early Pharaonic cultures, and trade items have been discovered that demonstrate the links shared by these early peoples. 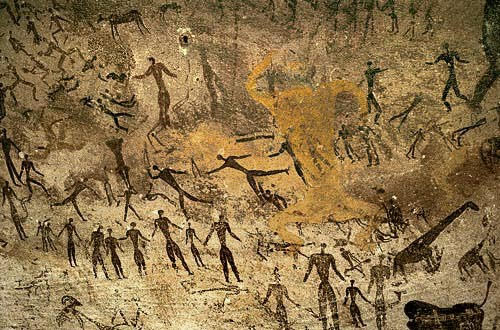 Penderel, in a paper presented to the Royal Geographical Society in June of 1934, says that John Ball was the first westerner to see the Gilf, while on patrol in 1917. However, credit for the discovery should be given to Egyptian diplomat Amed Hassanein Bey who in 1923 on his caravan journey from Kufra to Darfur reached Gabal Uwainat. The next to arrive was the Egyptian explorer Prince Kamal al-Din. On his expedition from Kharga to Uwainat in 1925, carried out by Citroen caterpillar vehicles, he was the first to see the eastern escarpment of the Gilf Kebir plateau and coined its name. The beginning of the 1930’s saw a rather rapid increase in the exploration of the Libyan Desert, facilitated by the introduction of Ford A model motorcars that was especially adapted to the demands of the desert. Geologists like John Ball and the surveyor Patrick Clayton mapped large areas between the Mediterranean and the Sudanese border including Gilf Kebir and Gabal Uwainat. In 1932, an expedition was mounted to explore the Gilf by air. It included Sir Robert Clayton-East-Clayton, Count Laszlo Almasy, P. A. Clayton and Penderel.

As a bit of trivia, it may be noted that the fictional story, the “English Patient”, was based on the life of Almasy who came from an untitled Hungarian family, but claimed to have driven the car of the last Hapsburg king, Karl IV. In return, the king made him a count. They discovered several valleys rich with vegetation, including what would later be known as Wadi Hamra, Wadi Talh and the Wadi Abdel-Malik. These valleys were used by tribesmen for grazing and some explorers believed that they were the legendary lost oasis of Zerzura.

Archaeological work began in 1933 by Fronbenius, focusing on rock art.

During World War II the Italians had a base in the region, while the British set up at Uwainat. The Italian four-gallon tins and British camp remains are still landmarks in the region today. 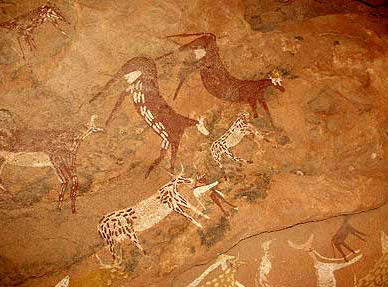 After 1945 the Egyptian Geological Survey was the main body present in the area and also carried out the interdisciplinary NASA-expedition of 1978 aiming at comparing the geological structures of the Gilf Kebir with those of Mars. 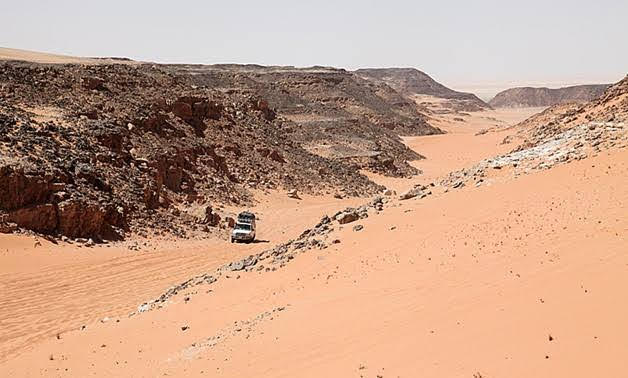 Wadi Abdel-Malik and neighbouring valleys like Wadi Hamra receive considerable run-off from the plateau and provide ground-water storage capacity for a remarkable lush growth of trees and shrubs at certain places. The occurrence of some Sahelian plant species together with a localised relatively dense stock of Acacia tree is similar to the environment that once supported prehistoric life there.

Silica Glass has become a “Mystery of the Libyan Desert”. Distributed within an area of not more than 80 km, this natural glass has no equivalent in any other comparable material on earth. For this reason it is looted to a large extent and today even sold on the Internet for $5 per gram. After 70 years of research, its origin by an extraterrestrial impact, 28.5 million years ago—probably by a meteorite that came too close to earth—receives more general acceptance, but there are still other ideas and a large number of remaining questions. 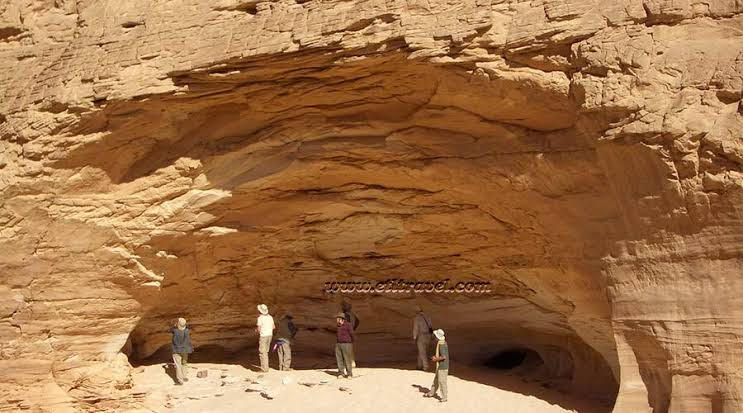