Through street shows, the Egyptian Association for Democratic Development and Improvement at al-Barsha village in Minya, some 250km south of Cairo, is participating in the international 16-day campaign to combat violence against women. The campaign runs from 25 November till 10 December.

“The Association, in cooperation with the Panorama Barcha Art Group, is presenting street performances and special songs for the event,” said Yustina Samir, projects director at the association. “We have performed the plays Dreams for Sale; That’s real, it’s not pretending; and The Joy; all of which tackle problems that face Upper Egyptian girls and women. They deal with issues such as circumcision, discrimination, education, and physical violence.”
Samir explained that the street shows attract villagers and achieve awareness objectives related to violence against women. Since 2011, she said, the association has participated in international and local events for women and children, and already has an influence on villagers. It has succeeded in areas concerning beating girls, early marriage and women’s right to work.

Panorama Barcha team is composed mostly of local young women; its founder is a young woman who works with the theatre and civil community. The team performs in the streets of Minya, at youth centres, schools, and artistic and cultural institutions. In 2012, the team began with only seven girls; today it includes 30 members aged five to 35.
Panorama Barcha participated in the 2015 Sfax International Theatre Festival in Tunisia and in other international and local events in Cairo and Minya. 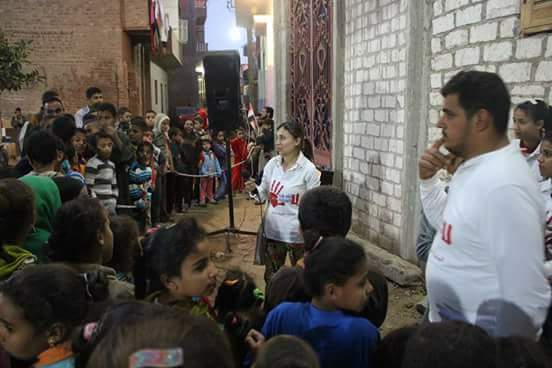