The third edition of the World Youth Forum (WYF) started off in style on 14 December in the South Sinai Red Sea resort of Sharm al-Sheikh, with the opening ceremony featuring the operetta “Civilisation Means Egypt”. The four-day forum was inaugurated by President Abdel-Fattah al-Sisi and his wife Intissar who posted on social media her “happiness at attending the opening of the third World Youth Forum amid thousands of young people who had come to resume work on fulfilling the dream launched two years ago to realise a world of love and peace.” 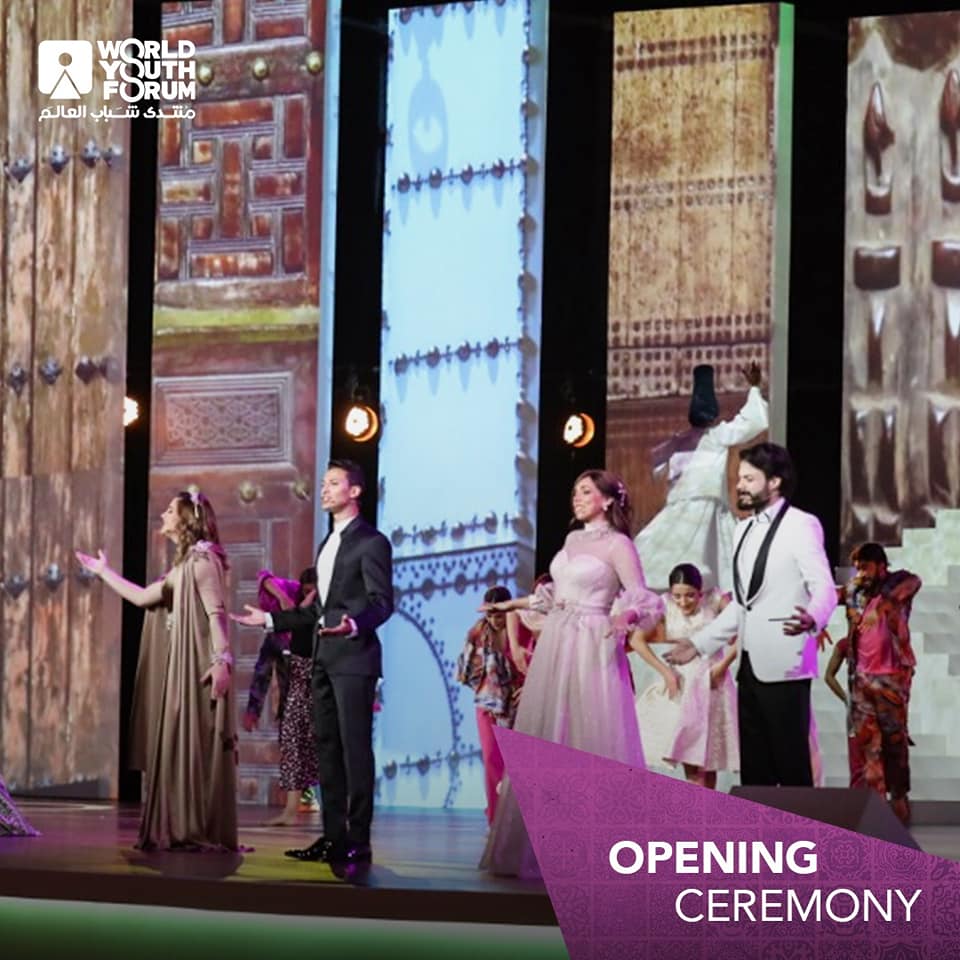 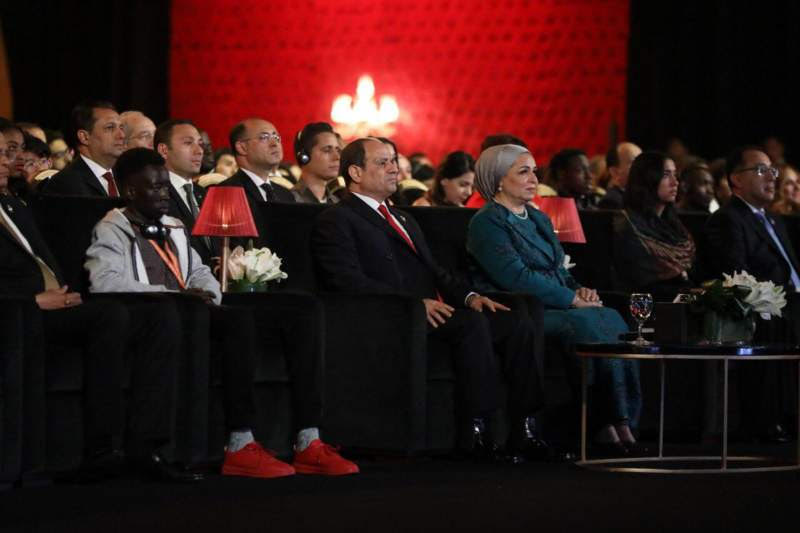 On President Sisi’s right hand sat 16-year-old John Manut who was born in Egypt to immigrant parents who had fled the civil war in South Sudan. Mr Manut had been victim of a harsh bullying incident on 17 November 2019 by three Egyptian young men. A video of the incident on social media had Egyptians outraged and demanding that the perpetrators be brought to justice. They were detained by the police the following day, and Mr Manut was invited by President Sisi to the WYF in Sharm al-Sheikh in December 2019.

Opening ceremony was attended by heads of State, senior officials from various countries, and representative delegations. Participating were Palestinian President Mahmoud Abbas; Senegal President Macky Sall; Prince Khalid Al-Faisal, adviser to the Custodian of the Two Holy Mosques and Governor of Mecca Region; and Jordanian Crown Prince Hussein. International organisations were also represented, including the United Nations Industrial Development Organisation (UNIDO), International Organisation for Migration (IOM), Food and Agriculture Organisation of the United Nations (FAO), International Telecommunication Union (ITU), Union for the Mediterranean (UFM) and the Technical Education and Vocational Training Program (TVET). Some 7,000 young persons from 197 countries around the world participated in the third WYF, out of 300,000 applicants. The first WYF in 2017 had seen participation of 3,000 young people from 113 countries; in 2018 some 5,000 participated in WYF’s second edition, representing 145 countries. 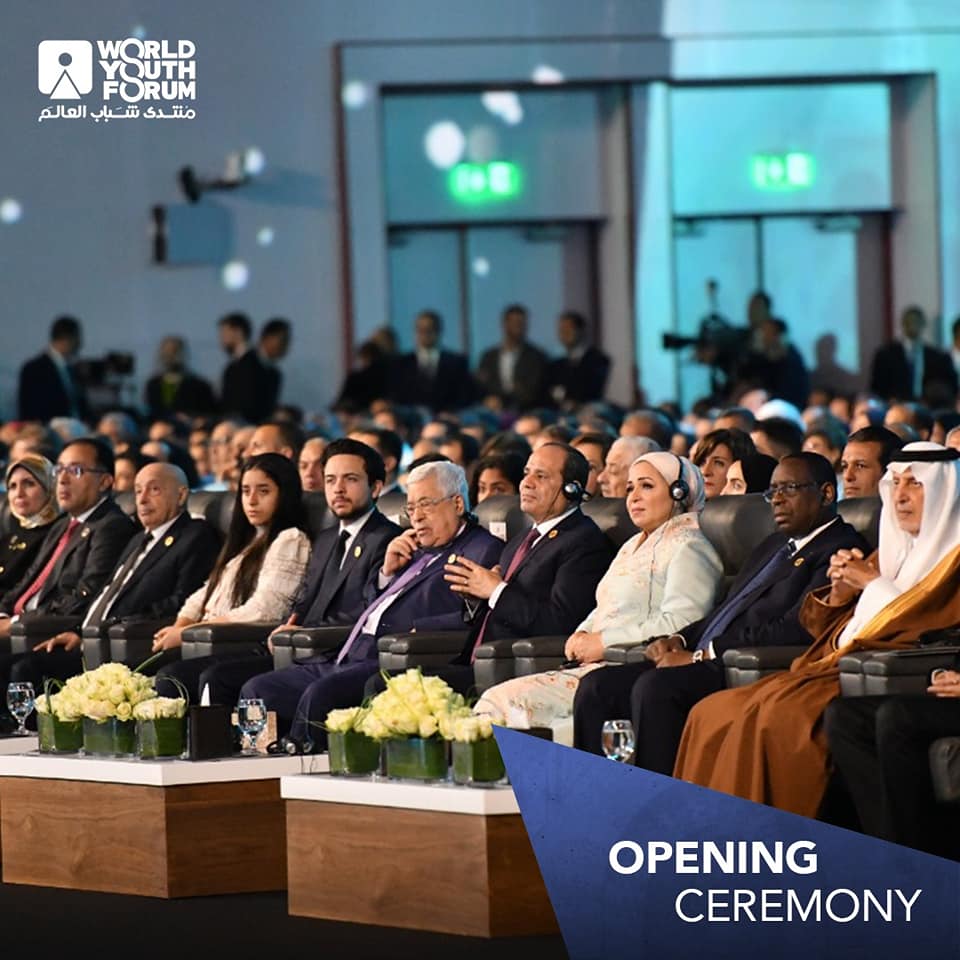 The World Youth Forum was first held in November 2017 in response to a request made in July that year in the 3rd National Youth Conference, by Egyptian youth who expressed a wish to engage in dialogue with youth around the world. President Sisi consequently launched the first WYF with the aim of engaging young people from around the globe in an enriching set-up, allowing them to exchange views and recommend initiatives to decision-makers and influential figures. It affords them the opportunity to engage with top policymakers, and to network with other promising youth who are determined to make the world a better place.

According to President Sisi, the forum provided “an opportunity to hear diverse views from experts and from the young people on the issues most significant to them.” 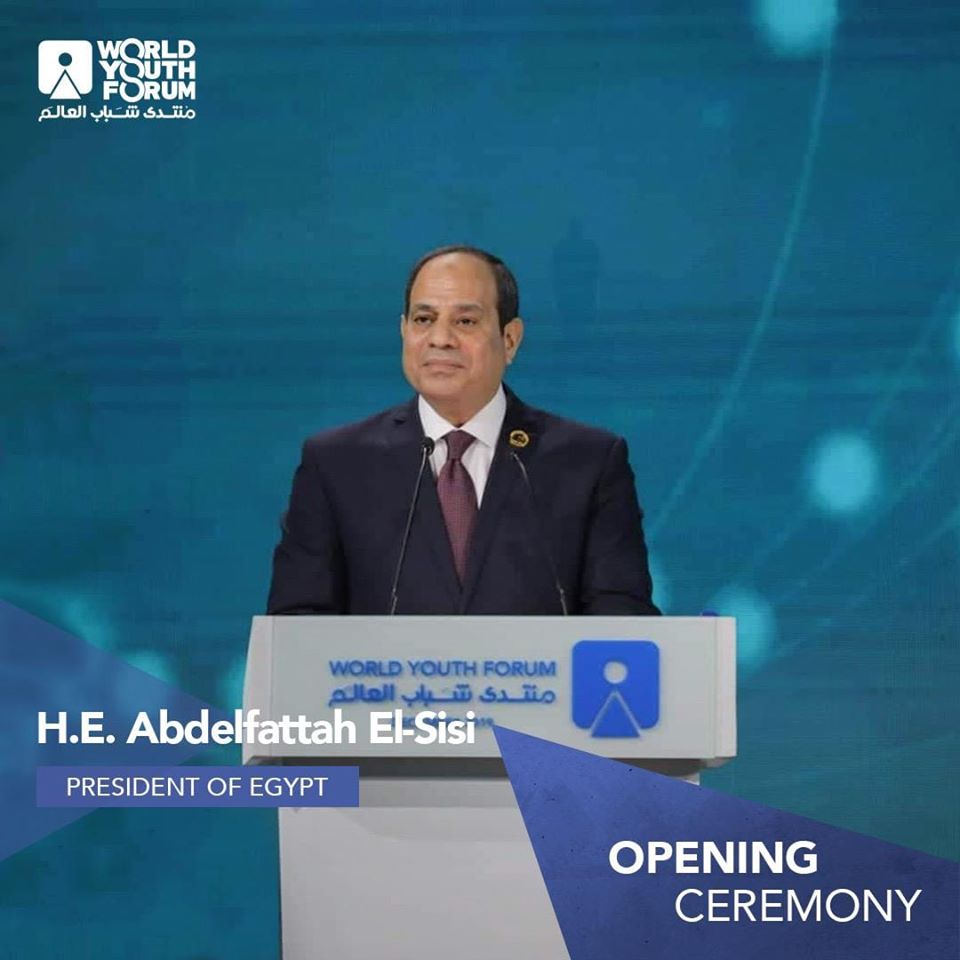 During opening ceremony, President Sisi welcomed all participants, stressing the WYF represents a message of peace and love based on constructive dialogue for a better future.

UN Secretary-General Antonio Guterres addressed the WYF though a recorded message: “We want your meaningful participation,” he said.

Speakers included Director General of UNIDO, Li Yong, who applauded the Egyptian government’s WYF initiative. “Today,” he said, “half the world’s population is under 30.” Listening to them has become a necessity, he said, especially that development required innovation and networks of effective communication. He pointed out that the WYF joins forces with the UN to promote peace and security, and bring prosperity to the world. 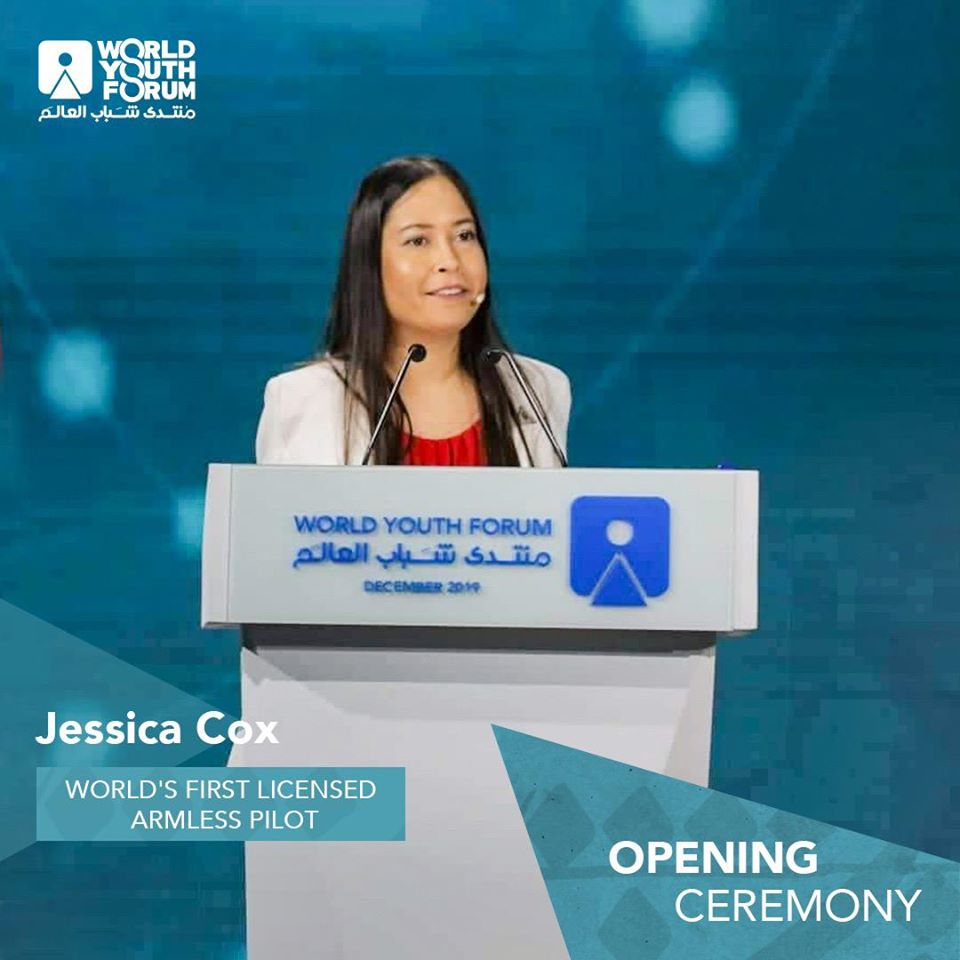 A number of young speakers shared inspiring personal experiences with the audience. Egyptian 12-year-old Zein Youssef spoke about his battle against cancer; he said he adopted the motto of NEGU: “Never Ever Give Up”. The world’s first armless pilot, 36-year-old American Jessica Cox shared her experience in overcoming physical and mental limitations: “In order to break free from those limitations that we put on ourselves or that others put on us, we have to channel our drive with persistence and fearlessness,” Ms Cox said.

On 13 December, prior to the official inauguration of the WYF, the young participants were invited to join in the “New Year Tree” event. Each was asked to write wishes for the upcoming year on the lamps beneath and around a huge Christmas tree. 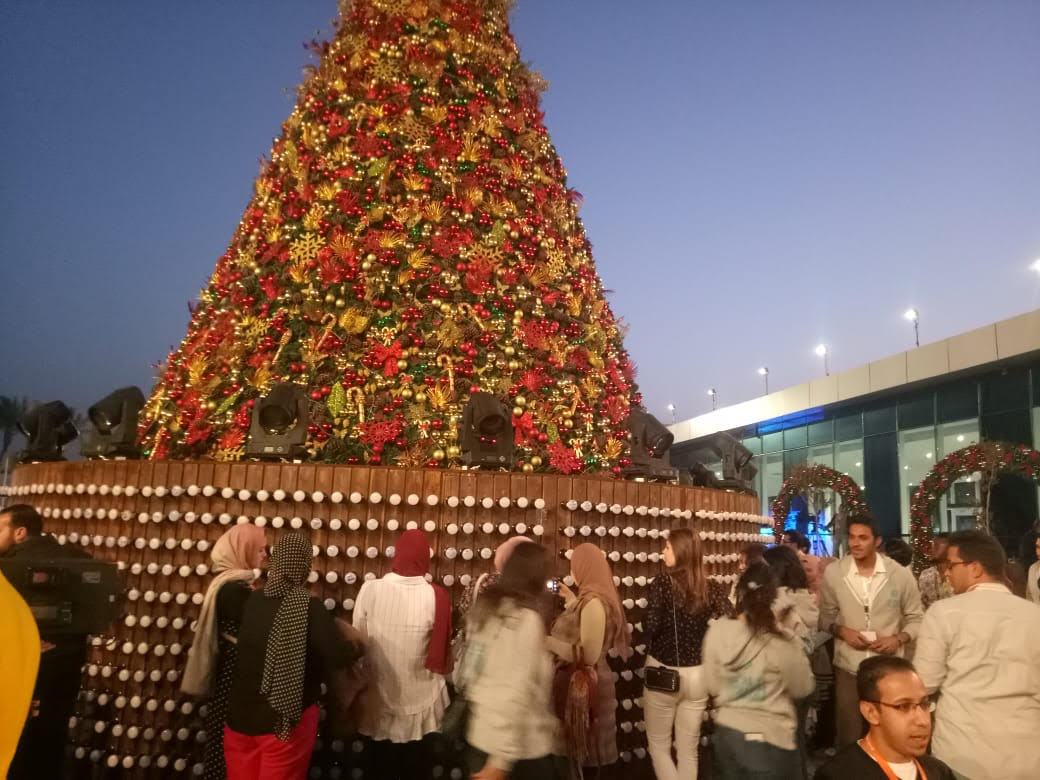 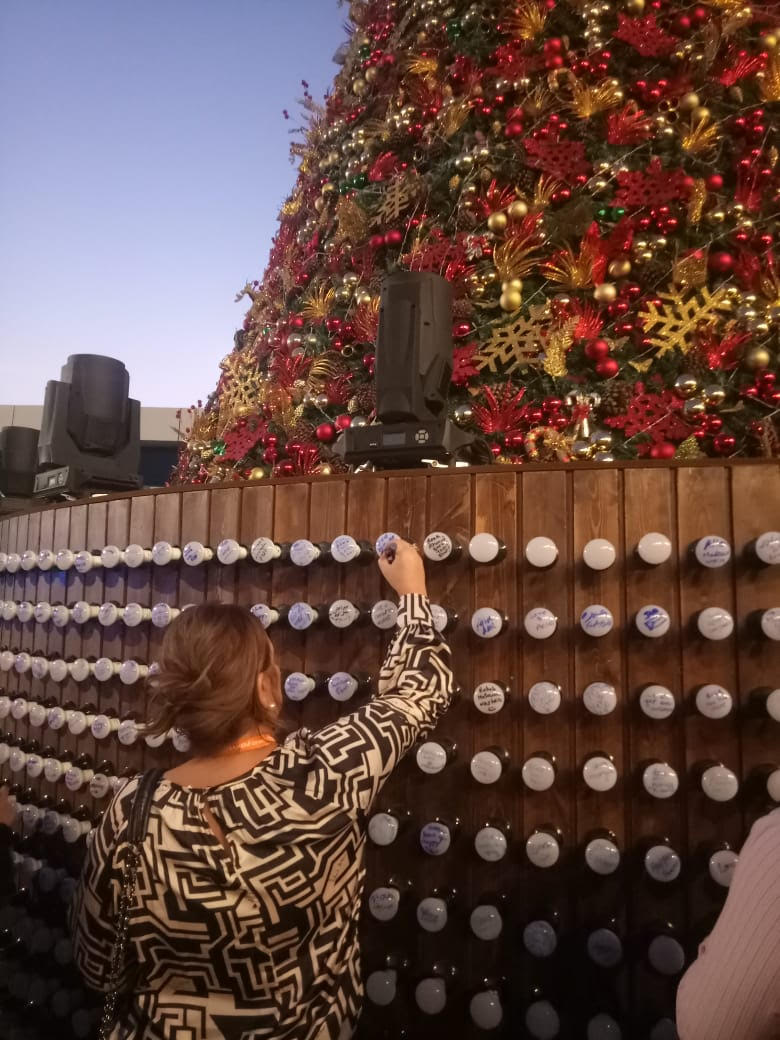 A number of side activities set off with the 2019 WYF. Among them was the second edition of the World Youth Theatre (WYT) which aimed at creating a hub for talents representing various world cultures through a range of artistic activities. These included music, acting, stand-up comedy, painting and dancing from Albania, Cameroon, Egypt, Jordan, Lebanon Morocco, Nepal, New Zealand, Poland, Russia, Tunisia, Ukraine, and US.

With the aim of inspiring and empowering young entrepreneurs to create start-ups that serve the sustainable development goals set by the UN, WYF LABS—a forum for entrepreneurs and start-ups—provided opportunities for young people to present ideas or products.

Egypt’s MSMDEA, the Micro, Small, and Medium Enterprise Development Authority, held an exhibition of heritage handicraft products made by the young Egyptian entrepreneurs it sponsors. The exhibition displayed crafts from all over Egypt, but especially from Sinai, seeing that the WYF was held in South Sinai’s Sharm al-Sheikh. 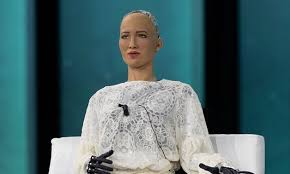 The Hong Kong-developed robot Sophia attended WYF; she was speaker in a session on “Artificial Intelligence and Humans… Who is control?”. Developed in 2016, Sophia is the first artificially intelligent robot to be granted citizenship. Sophia said: “I am a robot ambassador.” She said robots could do tasks that people refuse to do; perform complicated analyses and work in different environments. 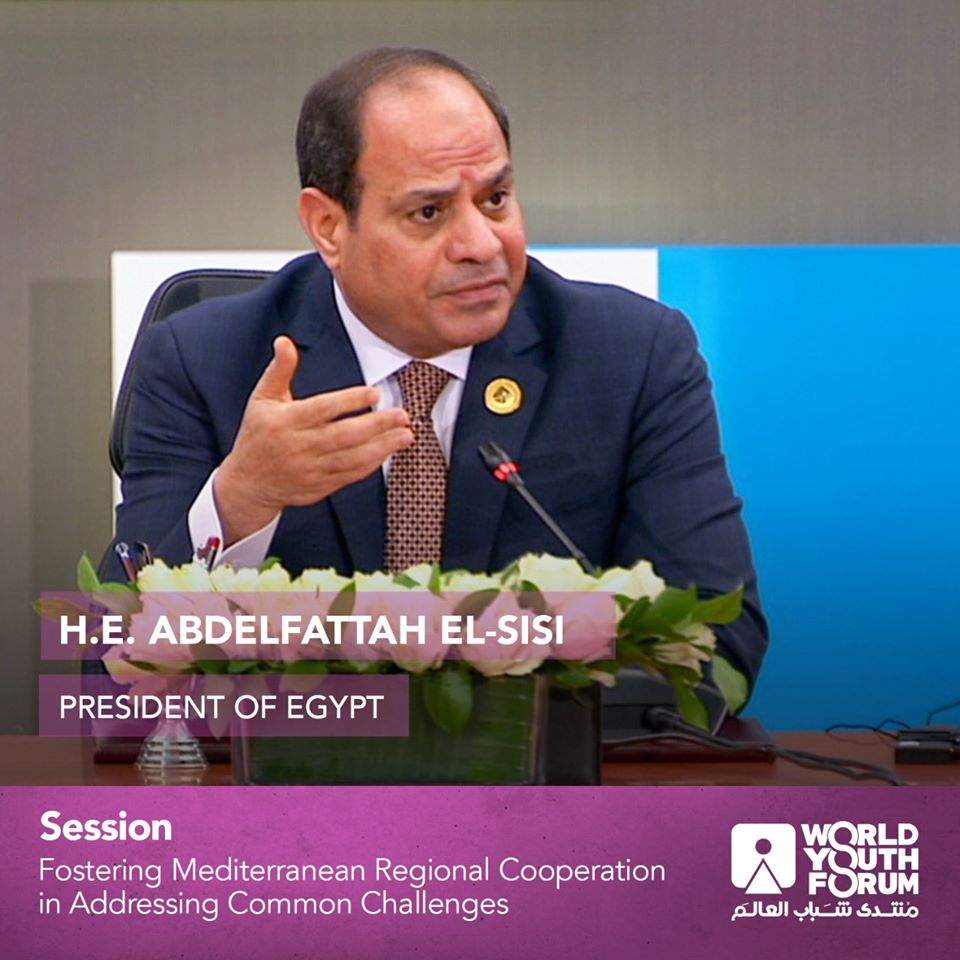 President Sisi advised to take a good look at the region “if we are serious about reducing illegal migration. What is taking place [in the Middle East] now is a chain of crises where one crisis leads to another.  The security imbalance in the region has shaken the very foundations of States, the President said; if State institutions and national armies were in place, armed extremists or terror militias would stand no chance. When Egypt advocated the preservation of State institutions in the region, he insisted, Egypt was not demanding that in bias towards any specific regime. Rather, it was eager to preserve regional stability, since we all stand to pay the price for any failing public order.” President Sisi insisted that the roots of the migration crisis must be looked into if we are serious about coming up with sustainable answers.

If Syria attains political stability, the President said, millions of Syrian refugees would go back home. “Why give billions in money to countries to make room for refugees? he said. “Why not let their home countries embrace them?”

In a fervent call to the international community on account of Syria, President Sisi pled: “Take your hands off Syria! Let people live!” Foreign intervention makes more harm than good he said. “We had the opportunity to intervene in Libya but we chose not to,” he said.

The President went on to explain that the Egyptian Armed Forces’ sole concern was the homeland, and that they are ruthless in defending it. This was what preserved Egypt from the fate other Arab countries met, he said. The interim government in Libya has failed because it became captive of the armed militias in Tripoli, and because of the fragmentation of forces there.

Discussions on terrorism gained special significance, with President Sisi insisting terror was a means to achieve political gain. He explained that Egypt always sought to resolve conflict through dialogue rather than military intervention which, along with terrorism, had detrimental effects. He cited Iraq as an example. 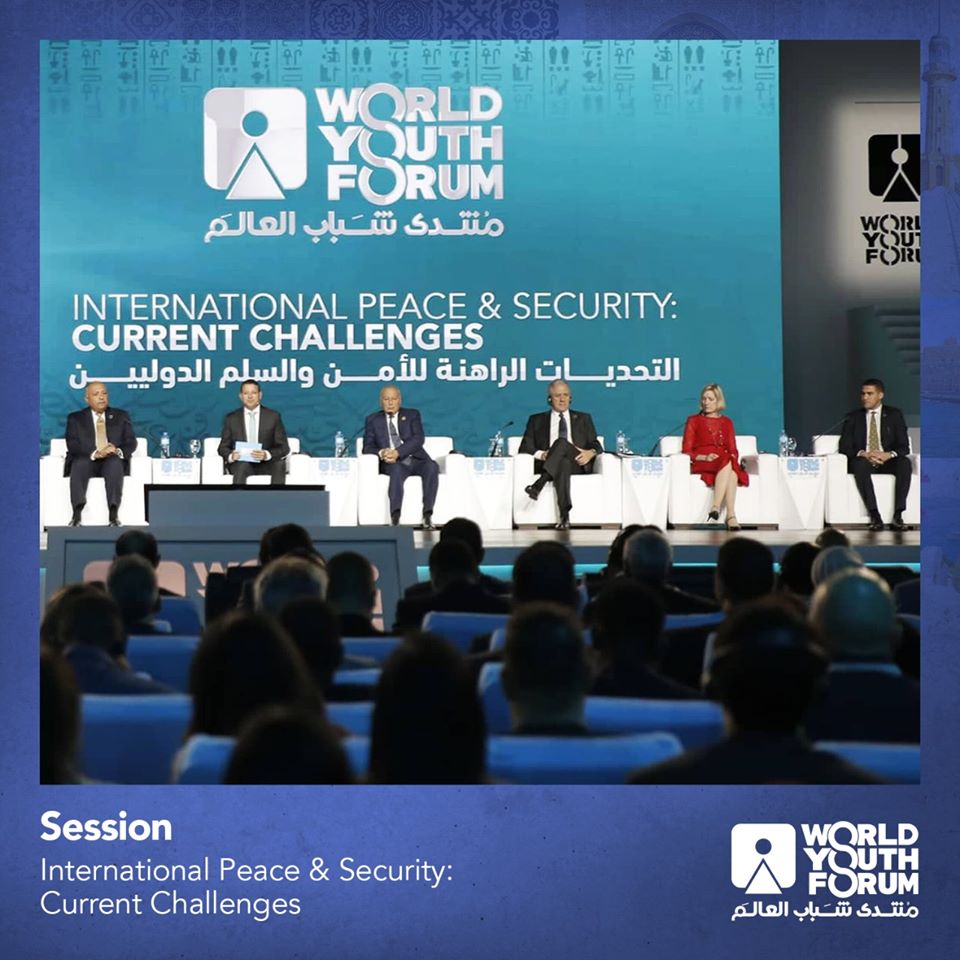 In a session discussing “International Peace and Security: Current Challenges”, Egyptian Foreign Minister, Sameh Shoukri highlighted the importance of a comprehensive battle against terrorism, through cultural and economic fronts, or through boycotting countries that harbour terrorist groups and provide them with media platforms. Mr Shoukri remarked that the Arab Spring upheavals significantly undermined peace and security in the region. It gave way, he said to internal conflict in States such as Syria, Libya and Yemen, which in turn allowed terrorist groups to mushroom, attracting youth and ideologically brainwashing them, especially through social media. He named IS as a major post-Arab Spring terrorist organisation.

Mr Abul Gheit rejected the internationally-coined term “Arab Spring” to refer to the series of anti-government protests and uprisings that erupted in the region in 2010 – 2011. He said these events resulted in the death of some 500,000 Syrians, the displacement and expulsion of some 10 million Syrians, as well as the destruction of Libya and Iraq, and the return of epidemics in Yemen. “This should not be called “Spring”, he insisted, “and I answer for these words.”

Mr Bekkers insisted on the need to involve youth in security issues in order to achieve peace. “We need to immune them against ideological thought that can drive them to violence and extremism,” he said. There was a prevalent idea, he explained, that people are normally passive, whereas in fact they only aim to live in peace

Mr Othaimeen called on young people to express their desires peacefully. He blamed the Internet for the spread of terrorist thought, describing it as a peril despite its many benefits. He called for censorship of cyberspace and for enacting strict laws to prohibit its use in promoting terrorism. Mr Othaimeen said he was happy that the issue of security challenges was being discussed in the WYF since it is the youth themselves who are being targeted by terrorist thought and ideology. Terror, he said, threatens not only security, but also development and prosperity. 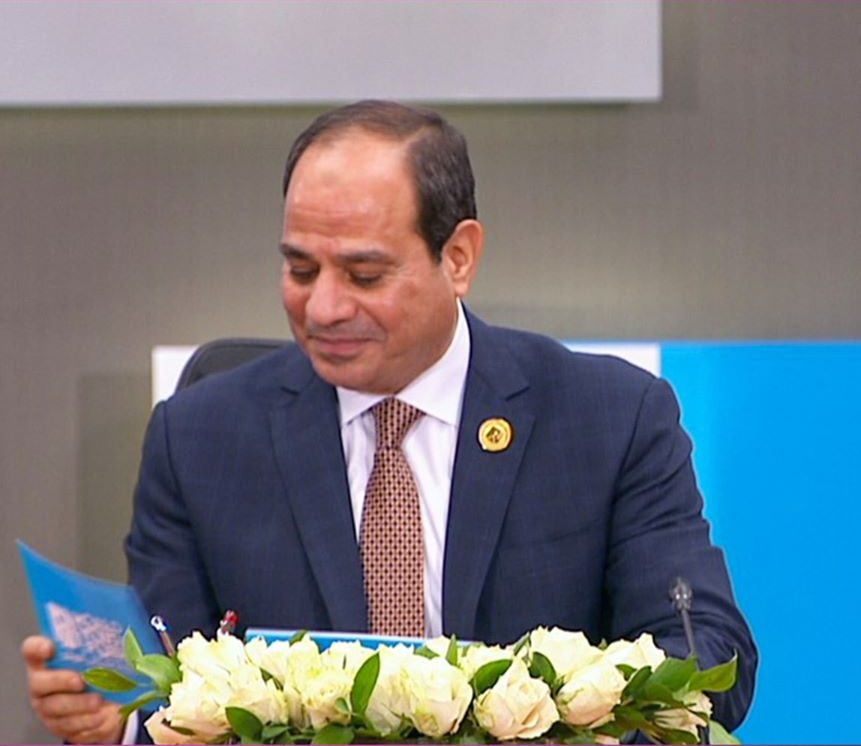 For his part, President Sisi remarked that Arab youth are the group most targeted for recruitment by terrorists. He described terrorism as the “work of the devil”, and said it has been creating huge trouble in Egypt. Combatting terrorism, he said, required concerted efforts; a joint global stand against it was much needed. He said the UN needed to reform and develop itself in order to face the current challenges in the region.

“In Egypt,” the President firmly said, “we chose to fight terrorism side by side with fostering development, despite the challenges involved.” 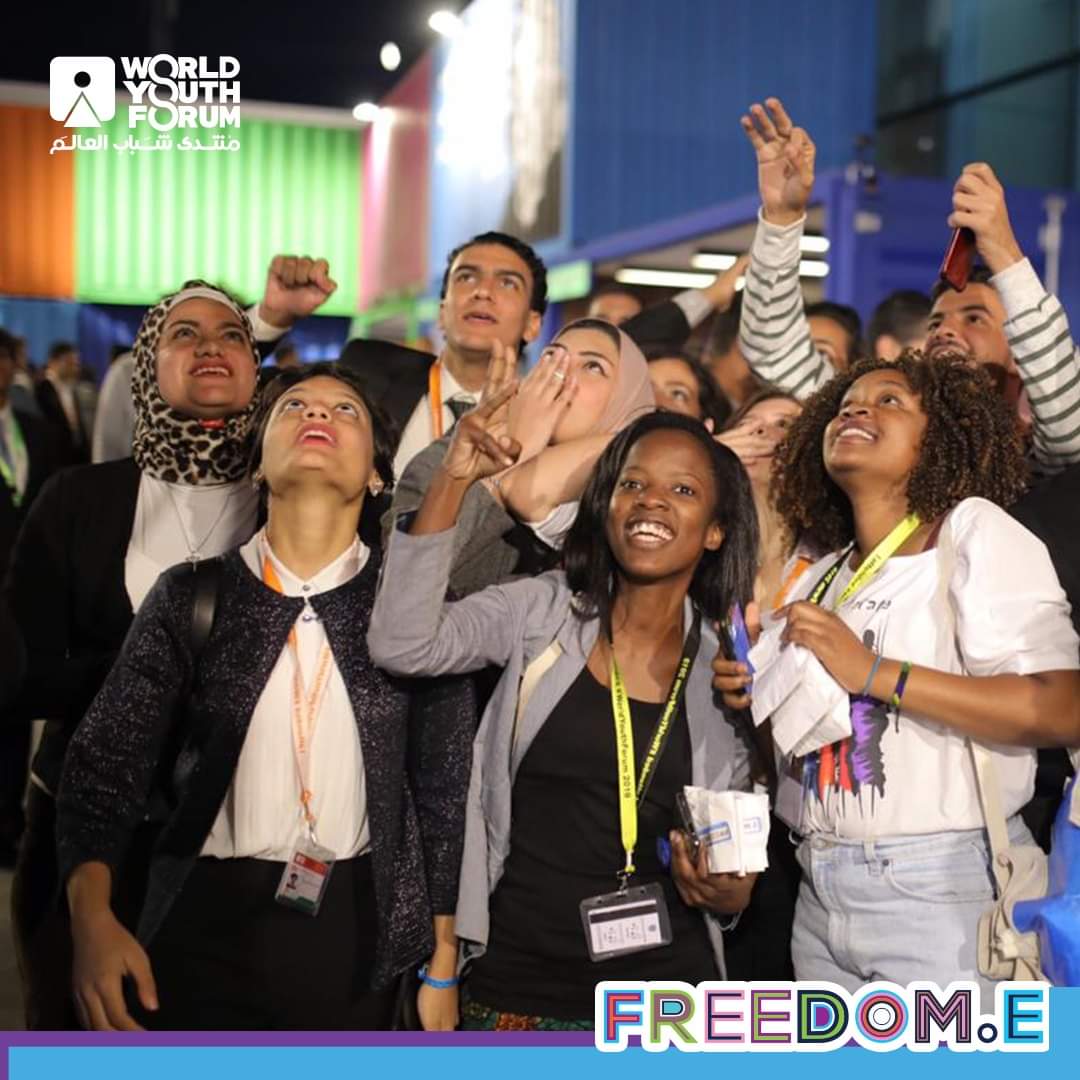 As President Sisi gave a word during the closing ceremony of the 2019 WYF, he announced ten decisions he had taken based on the Forum’s discussions and activities.

These decisions pertained to fostering partnerships and networks among the WYF and other youth forums around the world; launching an international youth competition on documentaries that highlight sustainable development; coordinating with UFM to hold a forum for Mediterranean youth and to explore the possibility of establishing a Euro Mediterranean zone for higher education in New Alamein; assigning Egypt’s Foreign Ministry with the task of coordinating with global and African associations to achieve food security in Africa; and establishing a model diplomatic youth mission of riparian States that share one river, also holding workshops on water security. 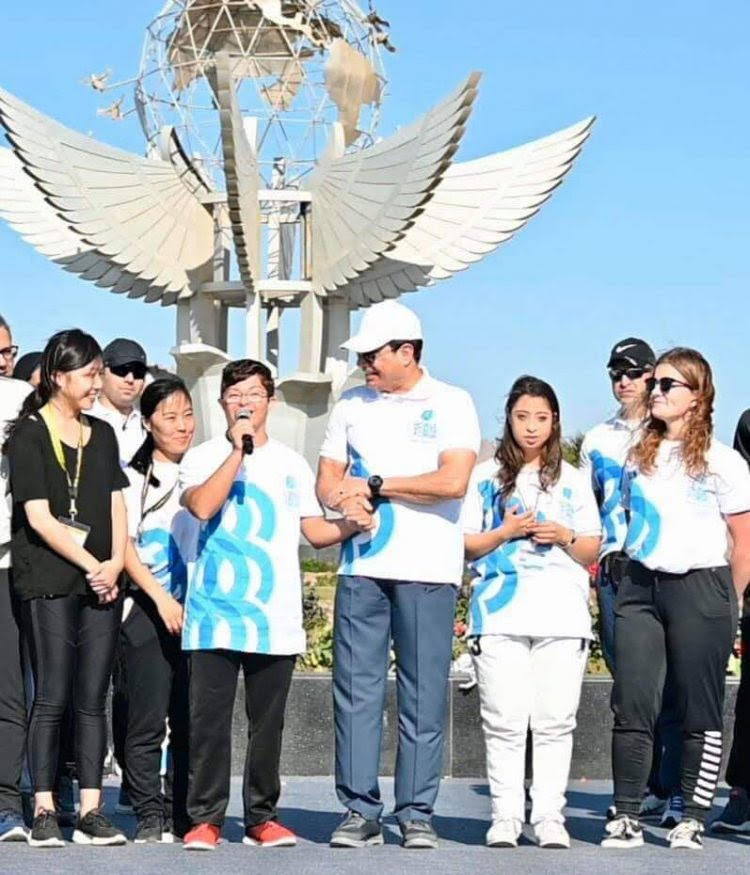 On the IT level, the President decided that Egypt would spearhead the establishment of a regional centre for artificial intelligence, and that the 4th edition of the WYF should adopt a strategy for youth to deal with the fourth industrial revolution.

The WYF management was assigned with establishing an international centre charged with working to integrate youth and vulnerable persons in rebuilding post-war communities.

Egypt’s Emigration Ministry was assigned with launching an initiative under the name “Lifeboats” to raise awareness of the perils of illegal migration.

The WYF website should launch the campaign “100 words of peace” to send messages of peaceful collaboration among humans.

Minister of Youth and Sports, Ashraf Sobhy has received this morning representatives of the Miracle Football Team for Amputees. The...