“We need to talk”

When some 1,500 of Egypt’s young people gathered at the Bibliotheca Alexandrina last July for the fourth National Conference for Youth, they discussed a plethora of multi-faceted problems and came up with resolutions that drove Watani International to comment:
“If anything, the resolutions demonstrate that Egypt’s youth have outgrown narrow, self-centred problems, and feel they are part and parcel of Egypt; hence their concern about problems that affect Egyptians in their entirety, young and old. The future is theirs; problems ignored today will plague their lives tomorrow.”
Top among the resolutions of the youth’s July conference was a demand for the State to fully support their call for a world youth forum that would relay a message of peace and love, and work towards the integration of civilisations.
Unmistakably, Egypt’s young people had also outgrown local issues and were ripe to tackle global issues, hand-in-hand with youth from all over the world. They realised the world of today is a global village in which events that take place in one corner of the world make ripples that reach even the remotest spot on the globe.

More than half Egyptians are young
Last week saw the fulfilment of the demand made by Egypt’s youth last July.
Under a specially built dome in the Red Sea resort of Sharm al-Sheikh which invariably presents itself as the ‘city of peace’, Egypt’s first World Youth Forum (WYF) took off on the evening of Sunday 5 November, sponsored and launched by President Abdel-Fattah al-Sisi.
The 46-session forum which runs till 10 November, attracted over 3,200 participants. Attending were 70 official delegations from 52 states, including leaders and senior officials from different countries in addition to envoys from the United Nations and the African Union, as well as youth representatives from 113 countries.
Throughout the preceding weeks, the forum had been promoted through advertisement billboards on major Cairo and Alexandria streets, as well as online ads under the hashtag #WeNeedToTalk. During the first 34 hours of the Forum, the hashtag was visited 21 million times.
The forum identified itself as one “built by promising youth that send a message of peace, prosperity, harmony and progress to the entire world”. Its official website posted: “The forum is a chance for you to engage with top policymakers, and network with promising youth from the region and the world that are determined to create real change in the world we live in today”. It would tackle various key issues including civilisations and cultures, technology and entrepreneurship, employment of youth for sustainable development, as well as fighting terrorism, extremism and illegal immigration.
In an interview with CNBC last week, President Sisi said that the forum is particularly significant for Egypt since more than half Egyptians are youth. He had declared 2016 the Year of Youth, and had sponsored national youth conferences held at regular intervals, during which he interacted first-hand with Egypt’s young. 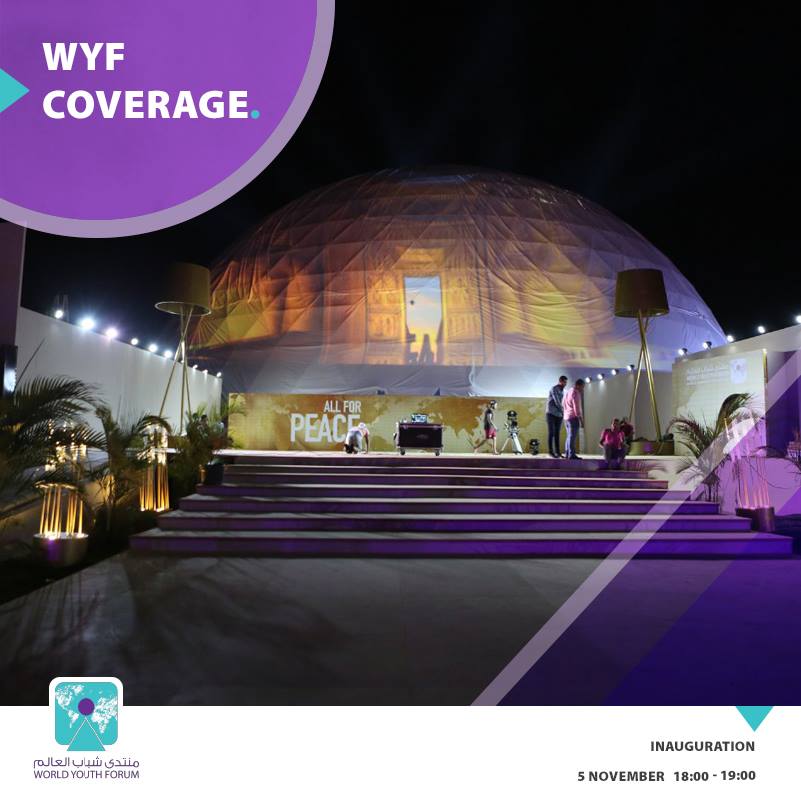 Tears … and dignity
Sunday evening saw the thousands of young people gather under the dome in Sharm al-Sheikh for the opening event. President Sisi walked in with his wife Intissar wearing her favourite pale blue and sunny smile. With them were the official guests from all over the world.
A number of State officials and youth representatives gave speeches, including the Administrator of the United Nations Development Programme Achim Steiner, who attended on behalf of the UN Secretary-General Antonio Guiterres. Mr Steiner said it was world’s young who stood most to lose on account of wars, violence, and terrorism; and that the UN was diligently working to fight the causes that lead to that, through peace efforts and development.
Among the speakers was the 19-year-old Yasidi woman Lamiaa’ Bashar who had been captured by Daesh in Iraq and sold into slavery. Ms Bashar talked of her harrowing experience in captivity, and of other women and girls as young as nine or ten who were brutally beaten and used as sex slaves. “They used to cry to their captors to spare them, but to no avail,” she said. She described her attempts to flee captivity, but said that she was found and returned, until she managed a final escape that nevertheless left her with a scarred face and psyche. Ms Bashar’s address left the audience deeply moved; many, including President and Mrs Sisi, had tears in their eyes. Later, in his opening speech, the President would talk of the horrors of war, terrorism, and the plight of refugees.
American actress Helen Hunt extolled the value and role of women and mothers, and called for their rights to be honoured. Ms Hunt spoke with dignity, strength and compassion, saying that Egypt, the mother of civilisation, was fit to fight for this worthy cause. 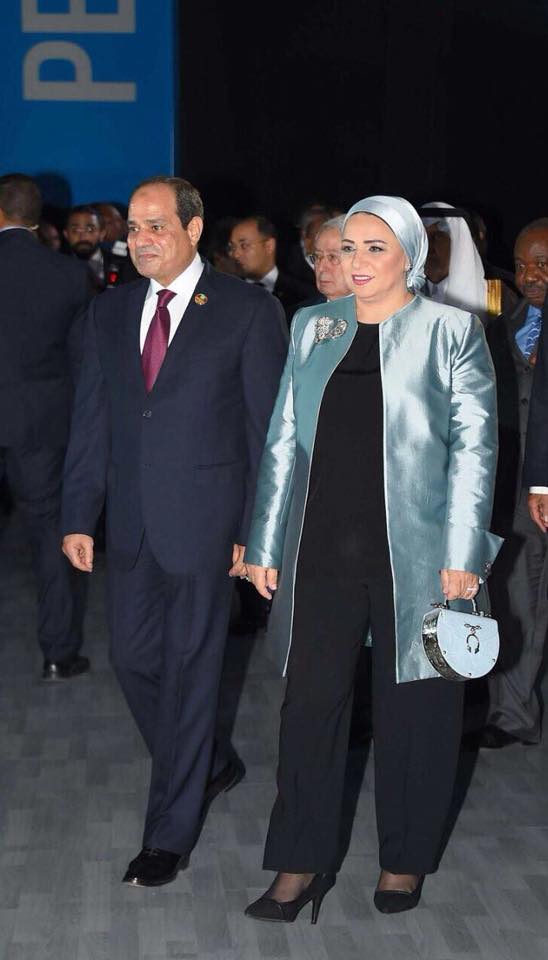 No address
A number of documentaries was screened, among them one that tackled the issue of refugees who talked of the wars that forced them to flee their countries, and the traumatic journeys they took to safe shores. It showed how many of them successfully attempted to work and gratefully built lives for themselves in their host countries, but that even so they still felt uprooted and had no place to call home, no address—hence the title of the documentary “Mailing Address”. The young Egyptians who made the documentary: Yassin al-Zoghby, 18, student; Ahmed Mouneeb, 28, violinist; and Sahar al-Zoghby, 22, singer; asked the refugees they met to play a very simple tune; the various tunes were then superimposed to create one melody played by refugees at large.

Fighting terrorism: a human right
Before his opening speech, President Sisi called on participants to observe a minute of silence for the victims of terrorism and war all over the world.
“From here, from the land of peace, I announce the inauguration of the activities of the World Youth Forum,” he said. The event, he stressed, sought to send a message of peace and aspiration for a world free of terrorism, extremism, or war.
“I invite you to exercise dialogue and co-existence, objectively and without discrimination,” he said.
“Egypt seeks to play its historic role in shaping a vision for peace and stability,” he said, “even though the country is engaged in two parallel wars, one against terrorism and another for development.” He proposed that the fight against terrorism should be considered a human right, since terrorism threatens to destroy human civilisation.
The President stressed that the world needs to reassess ideas and views that have led to a planet seized by [terrorist] wars, and to achieve the dream of peace.
“Egypt, with its Pharaonic, African and Arab roots, will employ all its capabilities to carry out its historic role in reshaping the ideas of peace and stability,” President Sisi added. He went on to praise the Egyptian people for what he insisted was their tireless work during recent years, and said Egyptian youth were an extension of their great forefathers who founded the first core of human civilisation, created glory on the banks of the Nile, and inscribed history n their temple walls. Their descendants should today live up to their heritage, and take the lead in the dialogue for peace for all humanity, also for development to battle poverty and extremism. 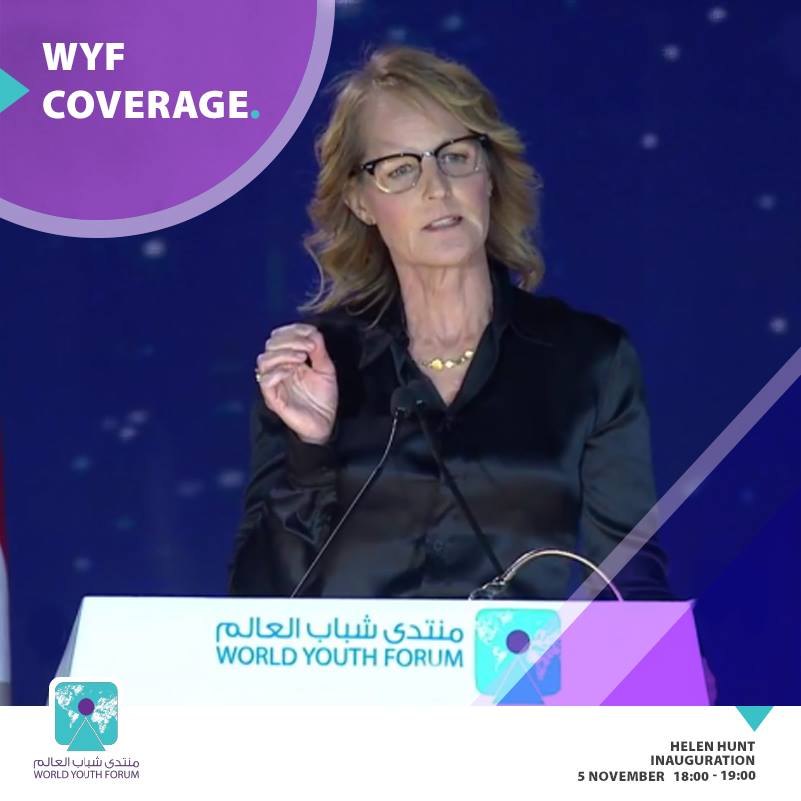 Misinterpretation of religion destroys nations
Throughout the following days, the forum proceeded to discuss various crucial topics including: Differences of Civilisations and Cultures: Clash or Integration; Exploiting the demographic return for investment in youth to achieve sustainable development, which was this year’s topic of the African Union; Challenges and issues facing youth of the world; Entrepreneurship and innovation; Youth make the future of the world, Role of civil society organisations to achieve the sustainable development; Future of climate change in the world; Effect of technology on education; Cyber crime; Historic truths about making leaders; and Review of the future’s leaders.
The sessions saw dynamic communication among the young people, and lively interaction between them and the President.
In “Differences Among Cultures and Civilisations: Conflict or Integration?”, President Sisi cautioned the young against misinterpretation of religious texts, saying that it was a means exploited by extremist terrorists to destroy nations. “Young people should take pride in their nationality and race but without provoking discord,” he said. In another session, he said terrorists were aiming to deal a deadly strike to Egypt so it would never get up again. “This means we have to be vigilant and persistent in our fight against terrorism,” he said. “Some in the world claim that we are dictators and against human rights, but the truth is we are fighting a bitter enemy that aims at destroying us; we love our people and wish to live good lives.”
He also spoke of the various challenges that face Egypt, major among which is youth employment. “We’re talking about 60 million young people,” he said, “with hundreds of thousands graduating each year from university. We have to create job opportunities for them.” This was the joint responsibility of the State and society, he said. “The large national projects provide 2-3 million job opportunities.” 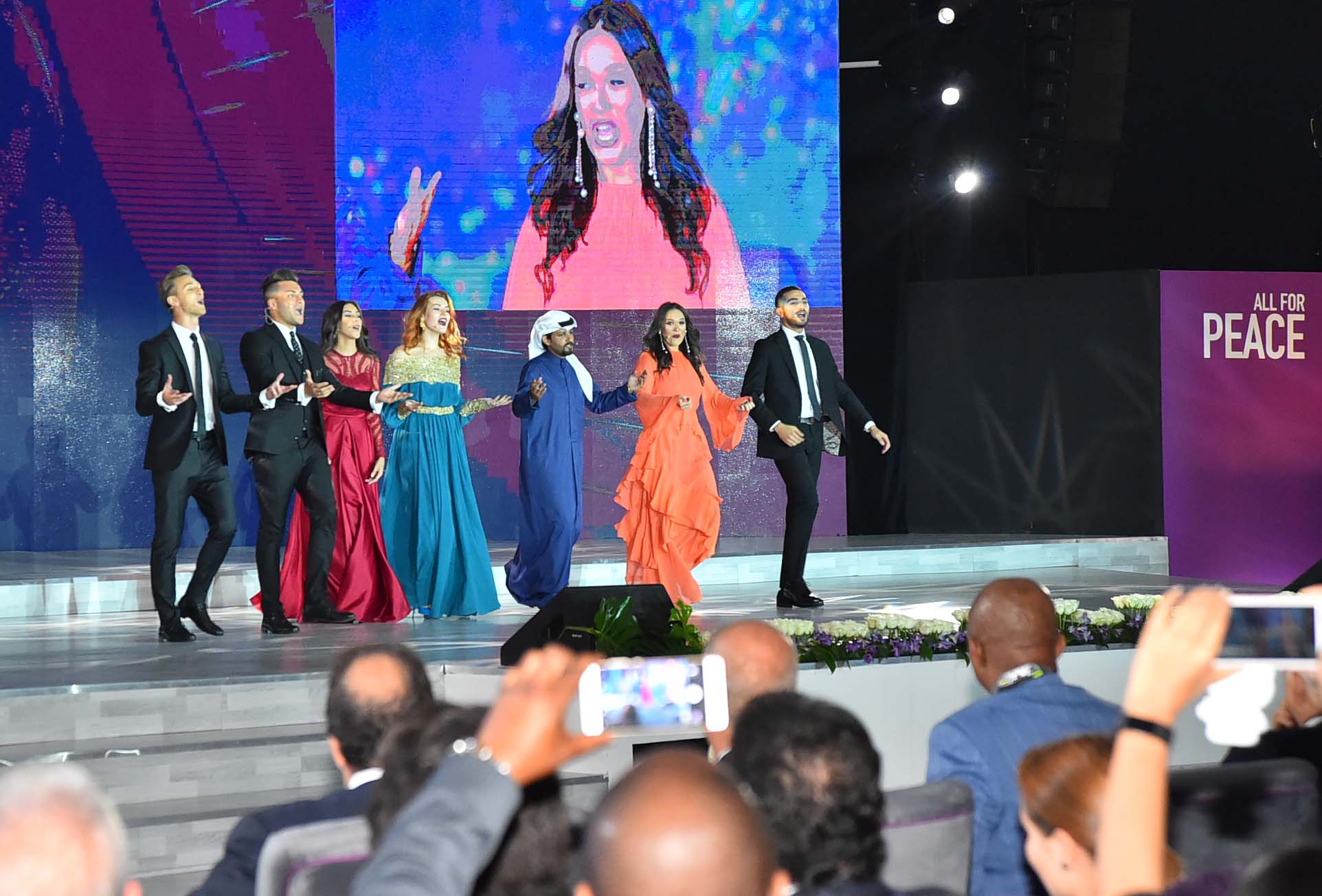 Annual event
Egyptian tycoon Naguib Sawiris addressed the WYF on entrepreneurship and innovation. He called for the foundation of a bank that works to finance small businesses and entrepreneurs, especially given that such businesses have great difficulty in finding adequate financing. He asked to be allowed to establish such a bank.
During the session titled “The Egyptian Experience in Building the Future”, President Sisi spoke about young people detained in Egypt pending trial. Hundreds of these young people were released during the last year by order of the President. The move came in response to a demand by the first National Youth Conference that was held in October 2016 in Sharm al-Sheikh. “We agreed then that a youth committee would be formed to review the list of detainees in political cases, not in cases of violence, and that in accordance with the authority granted to me by the Constitution and law, I would review their status,” the President said.
The concluding session during which the resolutions of the WYF were to be announced was held as Watani went to press. Coverage can be found on our website www.wataninet.com
President Sisi announced that the WYF would become an annual event; Egypt would continue to hold it regularly, as well as the National Youth Conference. “They are great platforms that cannot be abandoned,” he said. 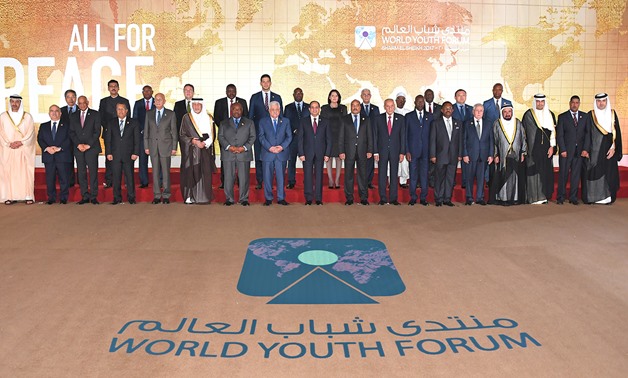 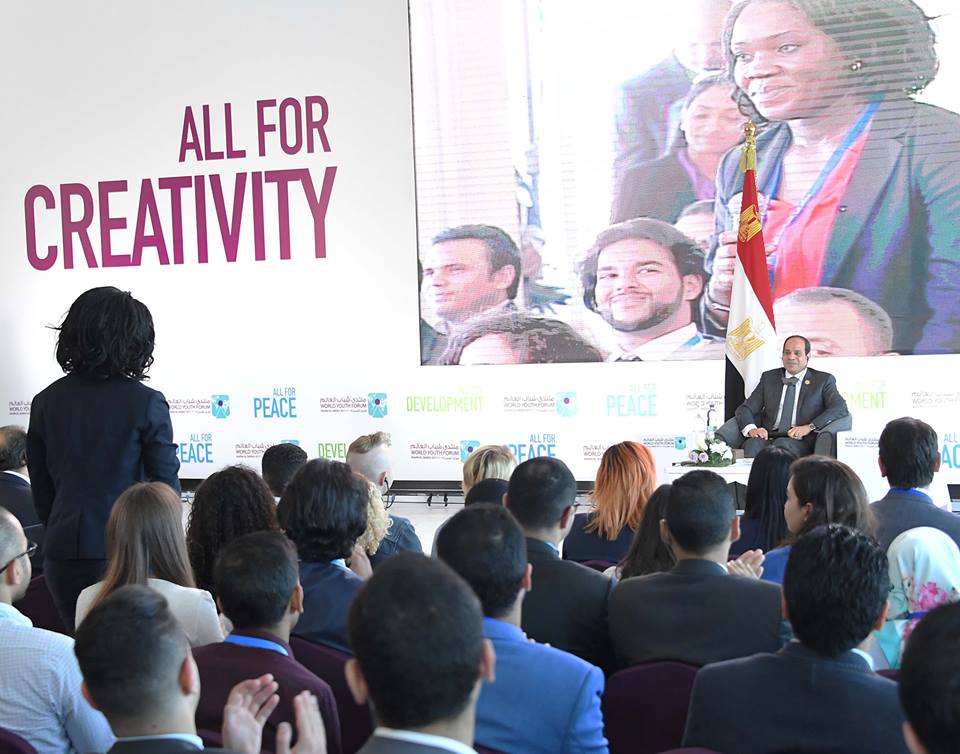 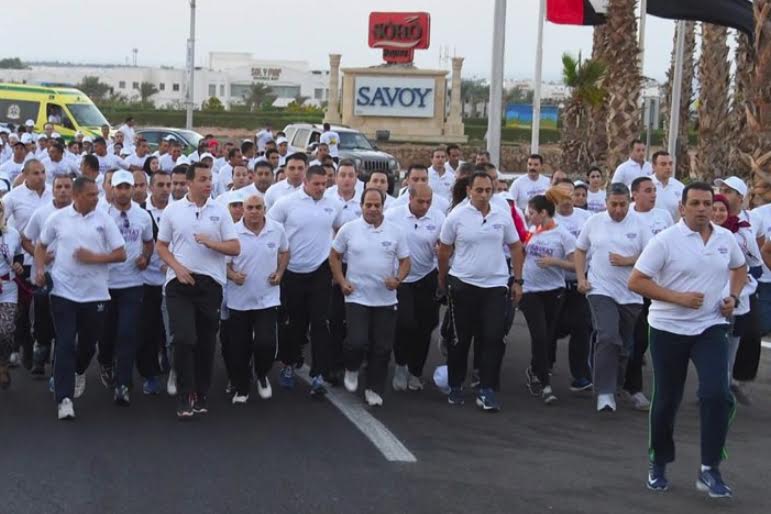