In Cairo, Russia marks 74 years on victory in WWII 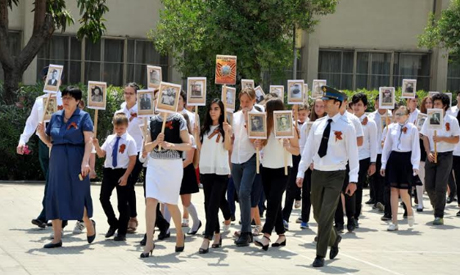 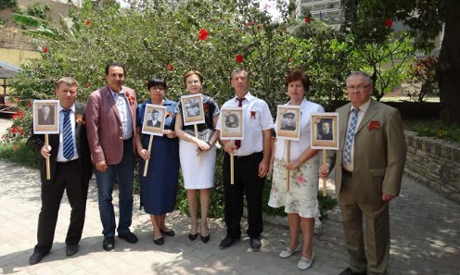 The Russian school in Cairo, a school affiliated with the Russian embassy, has celebrated the 74th anniversary of the victory of the Soviet Union in World War II.

Ms Denisova opened the ceremony with a speech in which she appealed to the younger generation not to forget the great sacrifices of their forefathers, stressing that without this great victory which saved humanity from destruction and which claimed the lives of some 50 million people, we would not today enjoy peace and stability. She pointed out that the Soviet Union claims half the victims of the war , an estimated at 26 million, and said: “we will pass them on from generation to generation.”

The ceremony began with a performance of some of the most famous national wartime songs. Then an archival documentary was screened showing details of the tragedy experienced by the peoples of the Soviet Union, including suffering, siege, destruction and hunger, also the heroism of the Red Army and volunteers.

For his part, Gad stressed the importance of transmitting this history and heroism to the younger generation, to turn historical facts into a torch to illuminate their future.

The celebration concluded with the “march of immortality”, in a touching scene where each child carried a portrait of a war hero. Some of them were killed outside the country and buried in Eastern Europe or Germany, while others lived long to see the fruits of the great victory.

The Russian Cultural Centre in Cairo has, throughout the last fortnight, hosted various cultural, artistic, music and dance activities to celebrate the 74th anniversary of Russian victory in WWII.

Prominent among them was a seminar that featured a round-table discussion which included director of the Centre, Aleksey Tevanyan; former Egyptian Culture Minister, Helmy al-Namnam; Head of the Afro-Asian solidarity association, Helmy al-Hadidy; Sherif Gad; and a number of history and political science professors.

Following an analysis of Russia’s role in WWII and the Battle of Stalingrad, Dr Namnam posed the question: What if the Nazis had won the war? Several scenarios were offered in response to the rhetorical question. Egypt especially came into focus, given that most of the participants were Egyptian. Dr Hadidy pointed out that Egypt was under British occupation during WWII and, as such, did not have a strong army to defend the land against the Germans. Dr Namnam said the Germans were sure to have invaded Egypt to seize control over the Suez Canal, a vital artery of world trade.

The event concluded with a musical performance by Sweet Sound band, conducted by Mounir Nasrallah which played Russian and Egyptian compositions.

Tags: Russia celebrates in Cairo 74 years on victory in WWIIRussian Embassy CairoRussian School in CairoWhat if Germany had won WWII