Giza Criminal Court’s 5th Circle for Terrorism sentenced Hany Mahmoud Saad to life imprisonment and a EGP20,000 fine in a retrial for burning a church in Kafr Hakim in the Giza village of Kerdassa on 14 August 2013.

The date 14 August 2013 had seen the Muslim Brothers (MB) go on a nationwide rampage in which they burned and plundered more than 100 churches and Christian establishments and homes in Egypt. The move came in retaliation to the disbanding by the government of two violent-oriented five-week-long MB sit-ins in the Cairo and Giza squares of Rabaa al-Adawiya and al-Nahda respectively. The sit-ins had in turn been waged to protest the overthrow of the MB regime that had ruled Egypt in the wake of the 2011 Arab Spring. On 30 June 2013, more than 30 million Egyptians took to the streets demanding that the army rids them of the MB rule, which the military did on 3 July 2013. 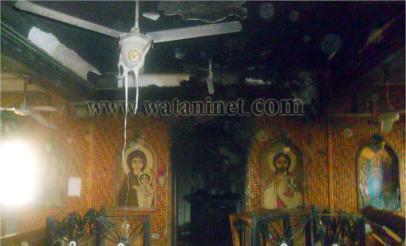 Mr Saad was involved in burning the Kafr Hakim church in Kerdassa, also in collaborating in the massacre of 11 policemen and police officers at Kerdassa police station. He was charged with joining a group established against the law and Constitution [MB]; acquisition of unlicensed firearms and ammunition; attempted murder; deliberately setting fire to a religious establishment; blocking a public road and hindering public traffic; and resisting authorities.