A 14-storey building in the Alexandria district of Lazarita collapsed at the early hours of Thursday 1 June, and leaned forward resting on another tall building opposite it on the street. The extraordinary sight of the leaning ‘tower’ horrified residents of the neighbourhood as of all Egypt.

Local authorities succeeded in safely evacuating the building and all nearby buildings, and provided the owners or tenants of their flats with emergency housing units in al-Amriya, south of Alexandria. Alexandria Governor Muhammad Sultan ordered a committee formed of structural engineering professors at Alexandria University to decide on how best to pull down the building in a controlled manner without damaging other buildings in the vicinity.  An adjacent four-storey building collapsed three days later, but all the residents had been already evacuated.

Security forces blocked off the area, and the overground tram service was temporarily stopped to avoid any disturbance that could cause the building to fall apart and cause further damage. 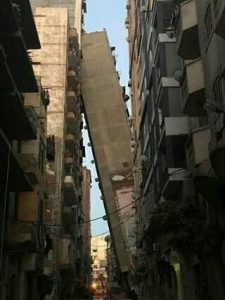 The Armed Forces’ Construction Department is working with the Arab Contractors Company to pull down the building. They empty the flats of furniture and appliances as they go along, and hand them to the owners.

It was fond that the owner of the leaning building possessed a permit to build only a ground floor and one upper floor, but built the other 13 floors without licence. The structural engineers from Alexandria University issued a report which said that there had been a recent leakage of underground water underneath the building, and the already structurally-impaired building gave way and could not withstand the leaked water.

Those responsible for the building’s hazardous condition are being prosecuted. There are strong suspicions that corruption among the local building authority officials is to blame for the construction of a building with such flagrant violations.

Mezzo Soprano Farrah El-Dibany is the first Egyptian or Arab ever to win the Prix Lyrique de l’AROP. The award...