“This is the day that the Lord has made; let us rejoice and be glad in it,” (Psalm 118:24). Coptic Christmas Eve on Sunday 6 January 2019 closed with a joyful Midnight Mass held at the largest church in Egypt and the Middle East, the Cathedral of the Nativity of Christ in Egypt’s new capital, still under construction. The new capital, a mega-project started in 2015 to tackle the country’s rapidly growing population and improve infrastructure and government services, is located some 40km east of Cairo and houses, side by side with the Cathedral, Egypt’s biggest mosque as well.

President’s pledge
This year’s Midnight Mass at the Cathedral of the Nativity of Christ was not the first to be celebrated there, last year’s Christmas Eve on 6 January 2018 was also celebrated there even though the building was but partially finished. Yet it was in fulfillment of a pledge made by President Sisi the previous Christmas Eve in January 2017. The President had then been visiting St Mark’s Cathedral in Abbassiya, Cairo, at Midnight Mass to wish the Copts a Happy Feast of the Nativity, when he made the surprise announcement that the next Christmas Eve Mass would be celebrated in a new Cathedral, the biggest in Egypt, to be built in the new capital. He kept good on his word, and the 2018 Mass was celebrated at the new Cathedral, aptly named the Cathedral of the Nativity of Christ. 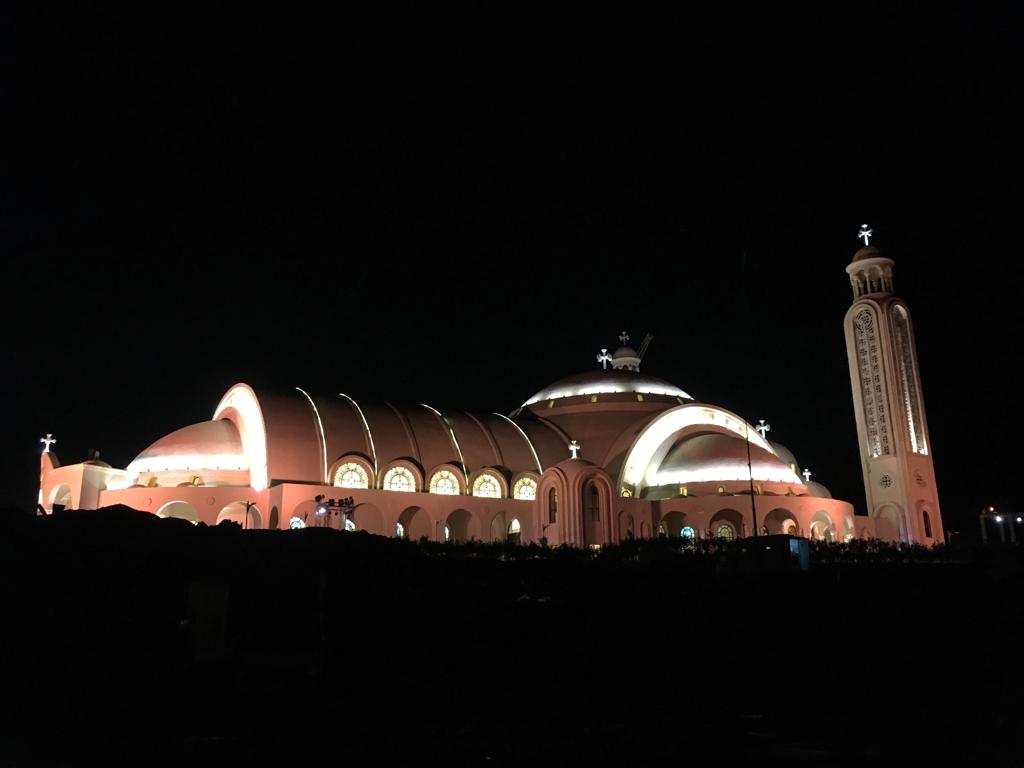 This year’s Christmas Eve, 6 January 2019, marked the official opening of the Cathedral and the neighbouring mosque named the Mosque of al-Fattah al-Aleem (Mosque of the All-Knowing Opener). Both Mosque and Cathedral were opened by President Abdel-Fattah al-Sisi, accompanied with Palestinian President Mahmoud Abbas who was on an official visit to Cairo, and the Grand Imam of al-Azhar Sheikh Ahmad al-Tayyeb and Pope Tawadros II.

First in 100 years
The evening began with President Sisi inaugurating the two-storey Mosque of al-Fattah al-Aleem. The Mosque accommodates some 17,000 worshippers, and features 21 domes, four minarets each 95 metres high, five gateways, two libraries, and a number of halls. 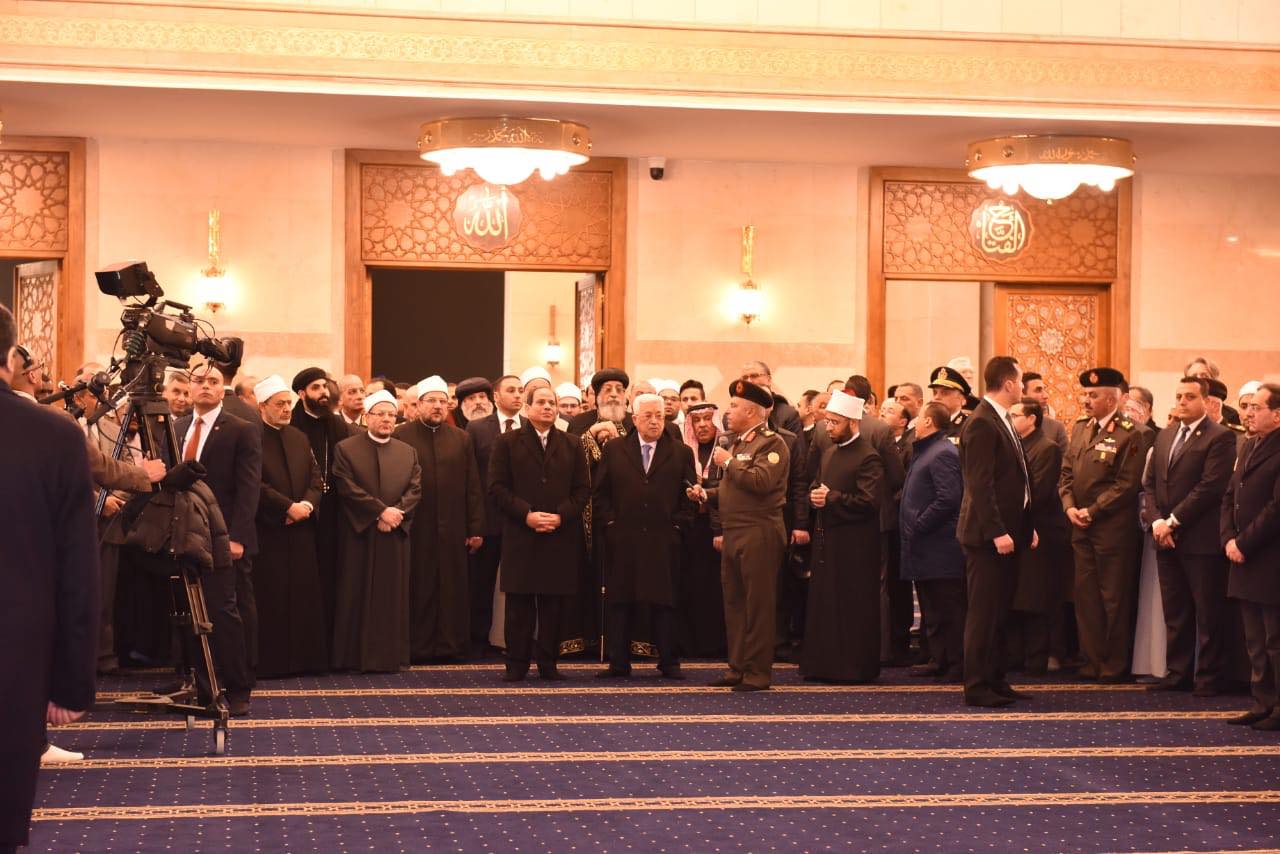 Pope Tawadros gave a word during the opening ceremony. It was the first time in 100 years since a Coptic cleric talks at a mosque. Back then, it was 1919 during the nationalist revolution which saw Egypt’s Copts and Muslims join hands to demand full independence from the British occupation; the Coptic priest Father Sergius (1882 – 1964), a fiery speaker, gave a speech at al-Azhar Mosque. 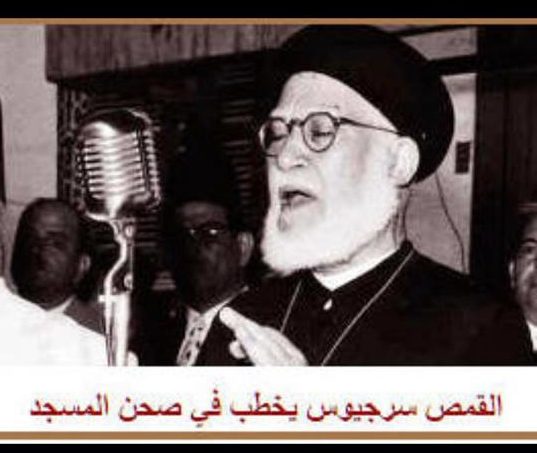 Pope Tawadros said, “Today is a day of joy as we see our beloved Egypt write a new chapter in the history of its deep-rooted civilisation. The famous Egyptian obelisk metamorphosed into the church spire which later inspired the mosque minaret.
“Today, the minarets of al-Fattah al-Aleem Mosque embrace the spires of the Cathedral of Nativity.”

“We’re all one”
President Sisi then headed to the Cathedral where he was welcomed by Pope Tawadros, and unveiled the curtain on the marble plaque declaring the official opening of the Cathedral. The President was then led inside through the main aisle in a procession to the traditional Coptic chant of “Ep Oro”, Prince of Peace. The Coptic words were centuries ago put to an ancient Egyptian melody that was sung to welcome the pharaoh’s triumphal procession home.
The Coptic congregation welcomed President Sisi with enthusiastic elation; voices shouting “We love you, Sisi” could be heard everywhere. 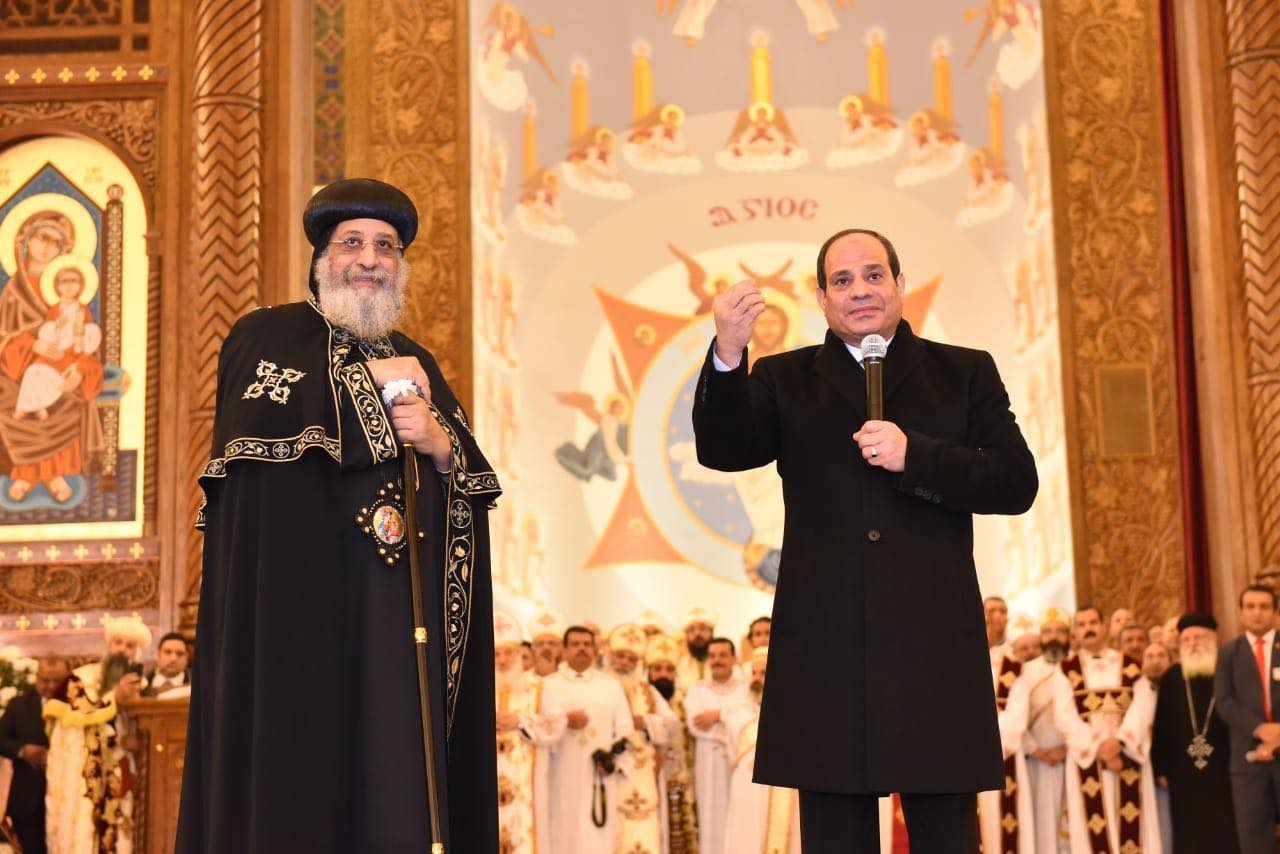 The President gave a word in which he congratulated the Copts and Pope Tawadros for the full opening of the Cathedral, the biggest not only in Egypt but in the entire Middle East. He said that this opening was a message of love and peace to all, in Egypt and in the world. “Love and peace will emanate from here in Egypt to shine through the whole world,” he said. “If anyone wonders if this can ever be, let me say that yes, it can and will be. Because evil and hate never did nor ever will defeat good and love which must finally prevail.”
“We are all one,” President Sisi noted, “no one can divide us. Amid the pain…no, no, I don’t want to talk of pain; this is not the time to talk of pain…we are here to share in your joy, and I don’t want to keep you from proceeding with your Nativity celebration.
“May God grant me to give joy to everyone. And Egypt will live long through you, through us…as long as we hold on to one another, nothing can break us.” To his customary triple “Long Live Egypt”, the congregation responded in full force.

Side-by-side
At the doorway of the Cathedral Sheikh Tayyeb expressed his happiness to participate in opening the biggest two places of worship in Egypt, and congratulated Pope Tawadros II and all Copts in and outside Egypt. “The giant Cathedral stands loftily side by side with the Mosque as a symbol of the defeat of all attempts to destabilise our country,” Sheikh Tayyeb said. “As far as I know, this is the first time in the history of Christianity and Islam to witness the building and opening of a church and a mosque at the same time.”

Love reigns supreme
Once the President left, Midnight Mass started. In his sermon, Pope Tawadros said that humans had, over time, lost the most valuable thing they possessed: their humanitarian qualities. And slowly, slowly, generation after generation, humans continued to lose their humanity; love was starved and their hearts hardened. According to the Bible, the Pope said, “All have sinned and fall short of the glory of God” (Rom 3:23). “We should go back,” Pope Tawadros said, “to unalloyed simplicity, faith, purity of soul, sense, and joy of childhood in order to qualify for Heaven. This could only be fulfilled through love. And in a gesture of utmost love, the Lord Christ came, as we read in the Holy Bible, ‘For God so loved the world that he gave his only begotten Son, that whoever believes in him should not perish but have everlasting life’ (John 3:16). 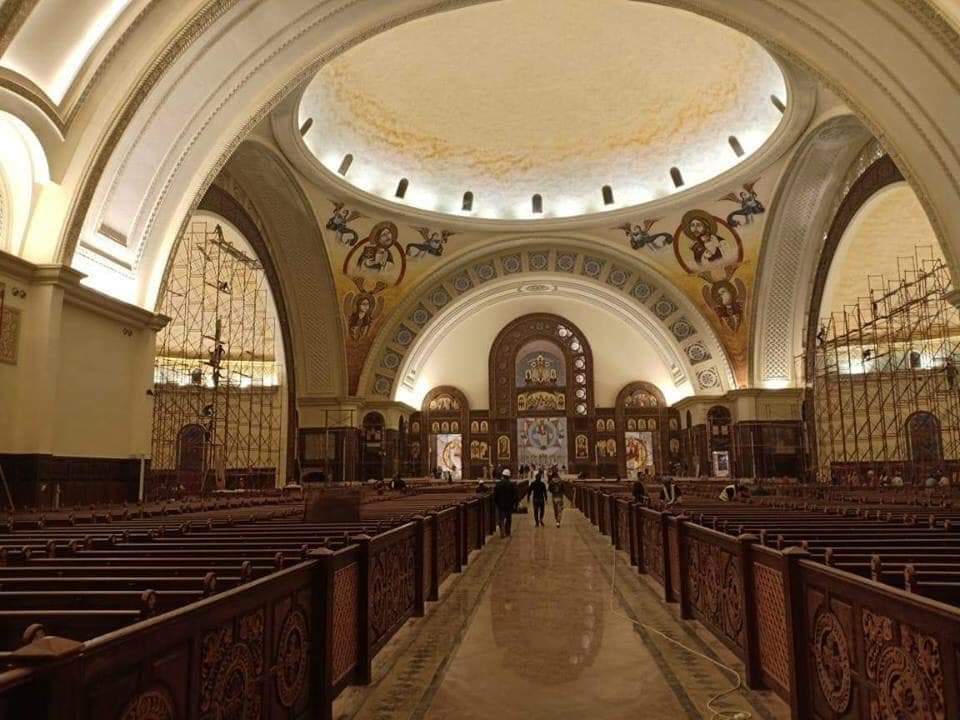 “As we live the joy of the glorious Nativity,” the Pope concluded, “We remember our beloved martyrs, who are also rejoicing because they are in Heaven. We also remember the injured and pray for their healing.
“We also pray for the peace of the whole world,” he added, “for our country Egypt, for every person, for every church service. And we pray that God would send this joy to every person, as it says in the Song of the Nativity: ‘Glory to God in the highest, peace on earth, and goodwill towards men’.”

Message from Pope Francis
Representatives of various Churches sent their greetings which were displayed on a screen during the Christmas Eve Mass. Among those who sent congratulations were Pope Francis; Maronite Patriarch Beshara al-Rai; Archbishop Youssef Absi, patriarch of the Melkite Greek Catholic Church; and Abune Mathias, patriarch of the Ethiopian Orthodox Tewahedo Church.
In his message, Pope Francis: “With joy I greet all of you, on the happy occasion of the dedication of the new Cathedral of the Nativity, built in the new administrative capital,” Pope Francis said. “The prince of peace gives the gift of peace and prosperity to Egypt, the Middle East and all the world.
“I offer a special greeting to my very dear brother His Holiness Pope Tawadros II and to the dear Coptic Orthodox Church, which is known to give a true witness of faith and charity even in very difficult times.”
Pope Francis gave separate greetings to the Egyptian government and to President Sisi. 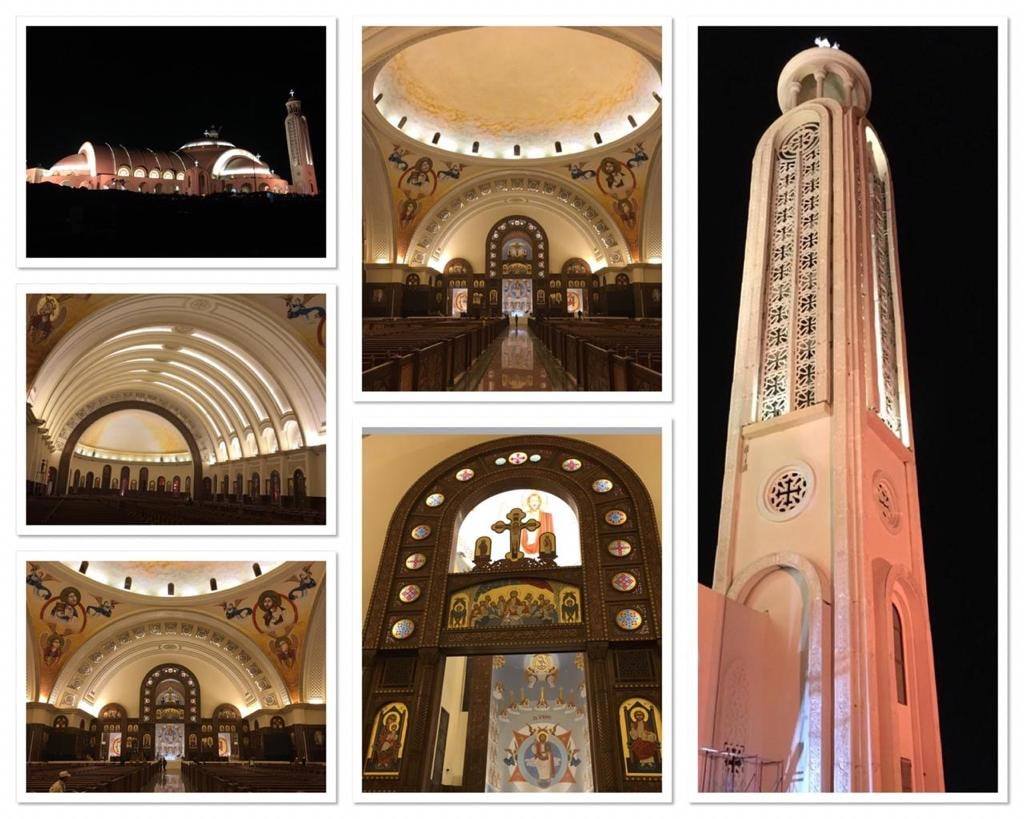 Church as lifeboat
The Cathedral of the Nativity of Christ is built on a vast site of 15 feddans (a feddan of land is equivalent to 4,200 square metres) that has been landscaped to include wide, open spaces and verdant greenery. It houses the cathedral, papal headquarters, a smaller church, a multi-storey underground car park, and a community service centre. All the buildings were designed to be compatible with the cathedral, so that the entire complex would resonate with a magnificent symphony of architectural harmony.
The cathedral was designed to emulate Noah’s ark, reflecting a Coptic tradition of the Church as a lifeboat that sails believers to the safe harbour of Eternal Life.
The cathedral rises two levels high, the upper one includes the main church.
The nave extends on an east-west axis, is roofed on the east with two perpendicular vaults, each 40m in diameter, intersecting in a cross-like formation. In their centre, the dome rises 40m in diameter and 39m high, lifted on four arches. A longitudinal cylindrical vault, 40m in diameter, extends westwards and roofs the nave until the cathedral door.
East of the nave there are three altars, each roofed with a dome. The dome above the main altar is 15m in diameter; those above the side altars are each 10m in diameter.
Two 60 metre-high spires carry the bells, and were built to be visible from a distance on all sides.
With a floor plan of 8,100 square metres, the cathedral can accommodate in its nave 7,500 worshippers. Seven steps on the eastern side lead up to the deacon choir and the altars. Behind the altars are service rooms to store vestments, ritualistic commodities, and suchlike.
The baptismal is located on the northwest corner of the cathedral; opposite to it is a large glass room for children. 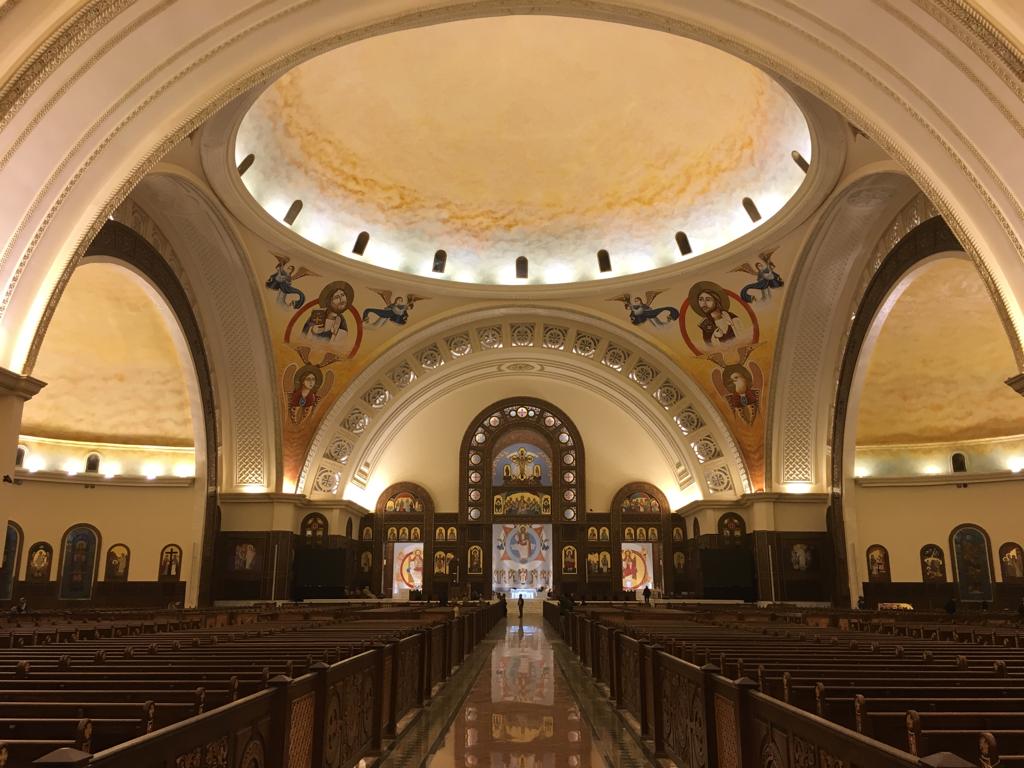 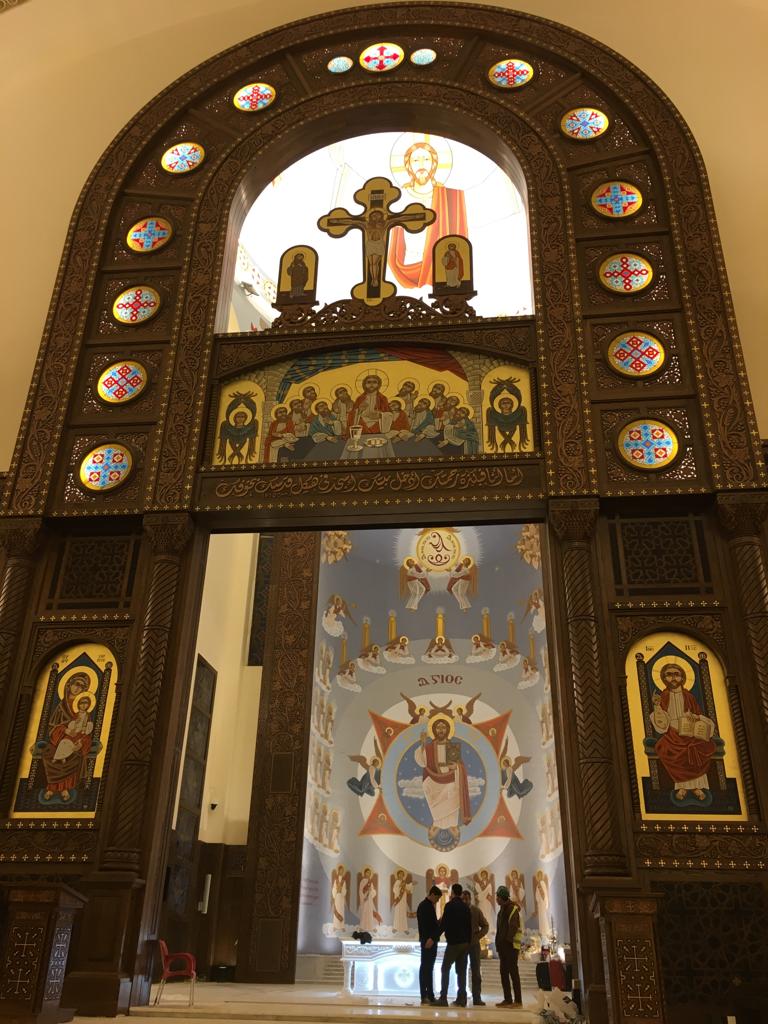 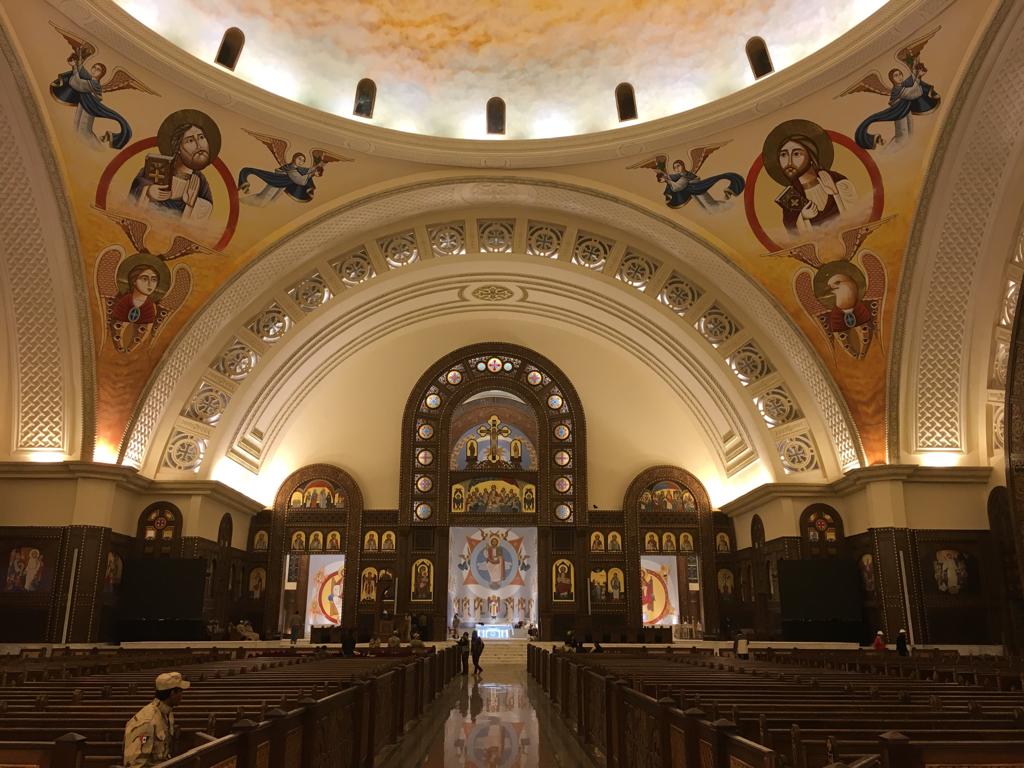 The ground floor under the cathedral is 8,500sq.m. in area. It houses a church 1,800sq.m wide that accommodates 1,200 worshippers, as well as a multi-purpose hall 1,500sq.m wide, a museum hall, and a meeting hall. It also includes public facilities such as bookshops, souvenir shops, and toilets.
Four elevators serve the cathedral, in addition to a number of ramps. The building is equipped with central air conditioning; the units are placed in the basement so as not to distort the aesthetics of the site.
A gateway on the northern side of the grounds opens to the main square in the area. 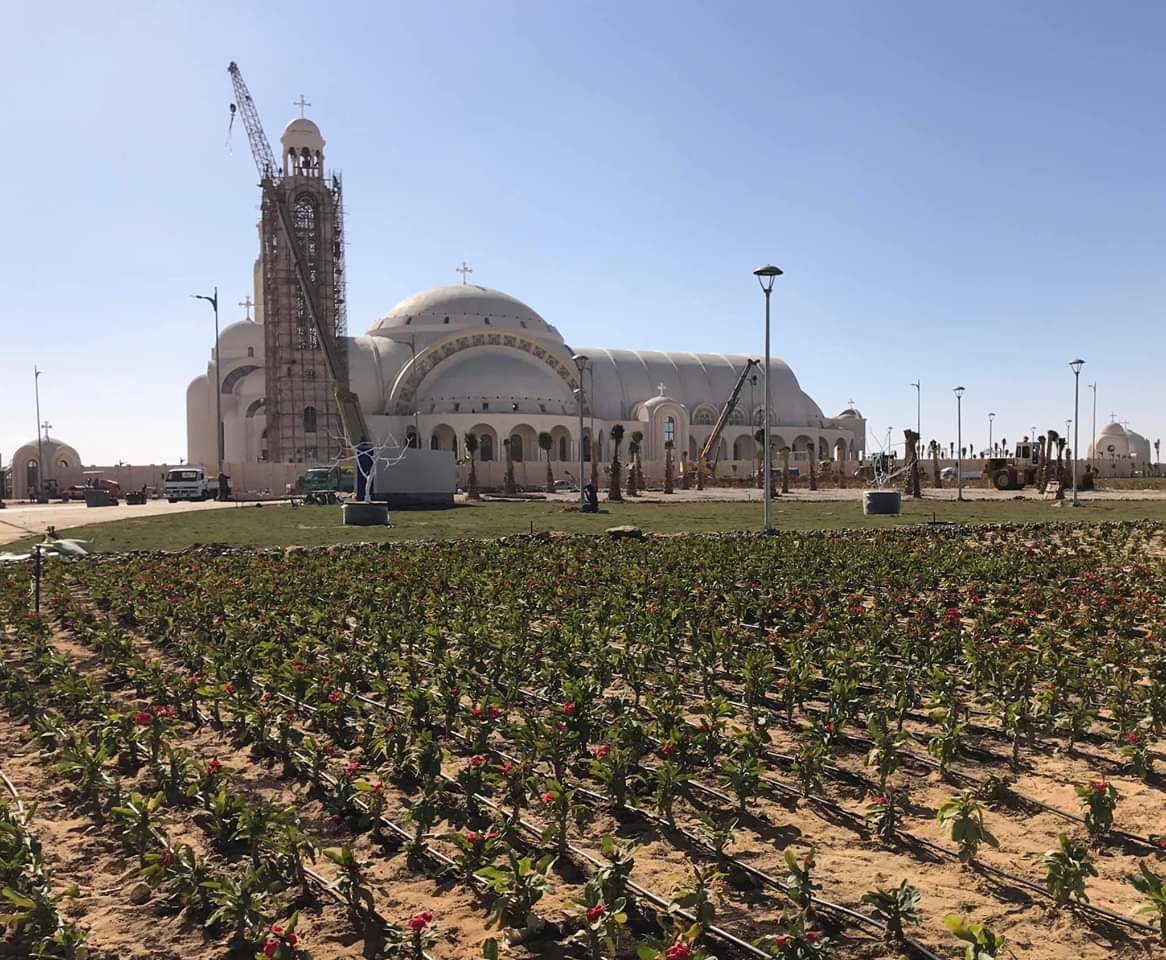 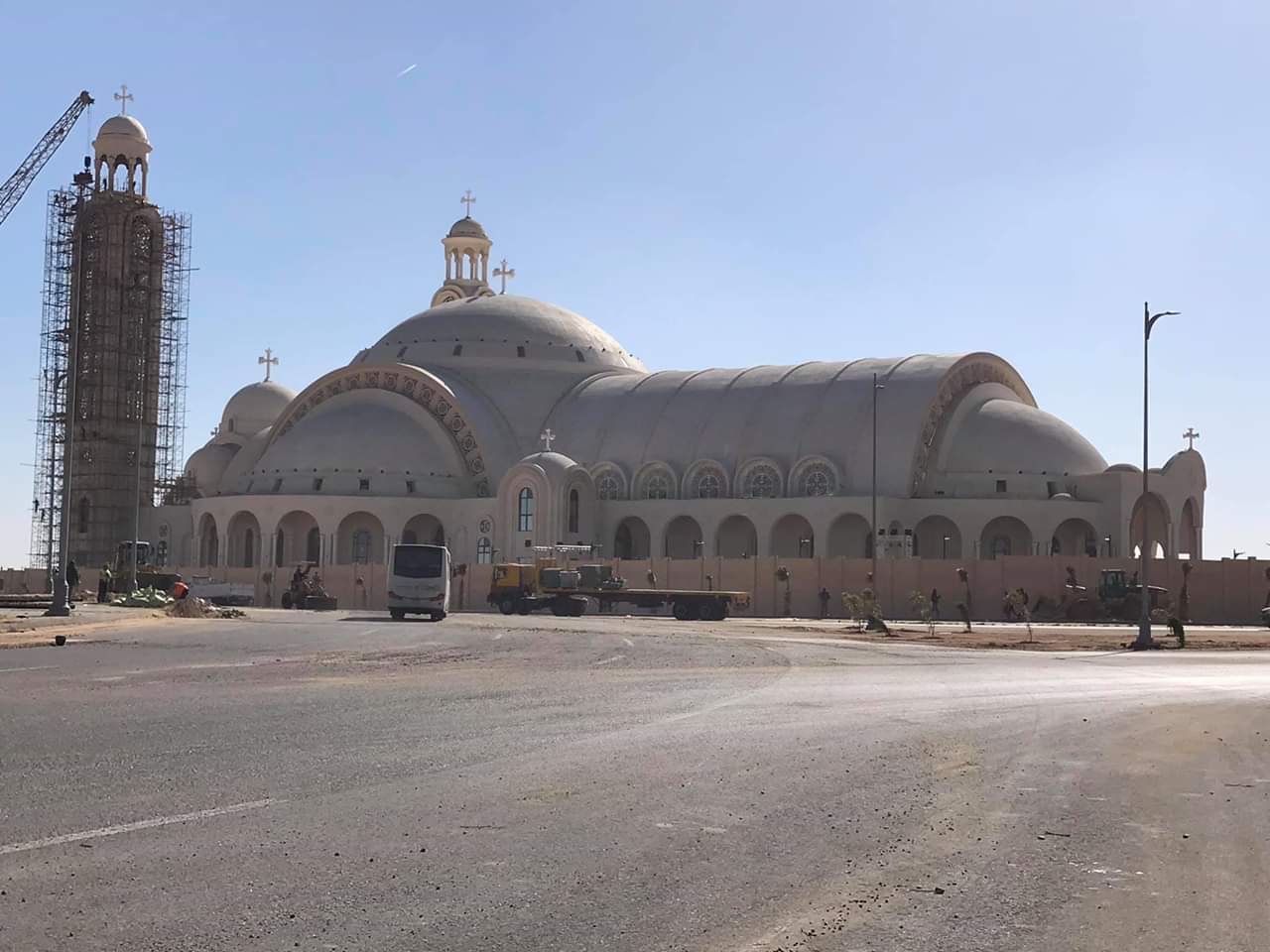 Tuesday 6 September witnessed the opening of the 11th general assembly of the MECC in Amman, with participation of 22...