In Egypt, the month of March marks an extended, joyous celebration of women. First comes 8 March, International Women’s Day; close on its heels comes 16 March, Egyptian Woman’s Day, followed by the day especially close to Egyptians’ hearts: Mothers Day on 21 March.
Egyptian Woman’s Day commemorates the day in 1919 when women in Egypt for the first time in long centuries left their homes to join in a public cause. Led by the founder of the feminist movement in Egypt, Hoda Shaarawi; and Safiya Zaghloul, wife of Egypt’s national leader Saad Zaghloul, some 300 Egyptian women took part in a national demonstration against the British occupation of Egypt; the young female demonstrator Hameida Khalil lost her life. The date 16 March was later assigned Egyptian Woman’s Day. 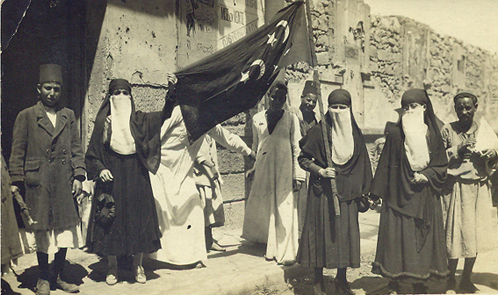 As March, drew to a close this year, President Abdel-Fattah al-Sisi together with his wife Intissar participated in a celebration held at Manara Centre on the outskirts of Cairo on 30 March 2019 to honour Egyptian women. Holding the special significance of coinciding with the centenary of the 1919 demonstration, this year’s celebration was organised by the National Council for Women (NCW), the Ministry of Social Solidarity, and the Ministry of Planning. Incidentally, all three are headed by women: respectively Maya Morsy, Ghada Wali, and Hala al-Saeed.

Root of the story
The event started with screening the documentary “Hiya Assl al-Hikaya”, “She is the Root of the Story” which focused on the history of Egypt’s feminist movement starting with the 1919 demonstration. The year 1923 witnessed the establishment of the Egyptian Feminine Union, as well as the first Egyptian Constitution; this stipulated obligatory basic education equally for girls and boys. In 1942, the first feminist political party was formed, but Egyptian women had to wait till 1956 when a new Constitution granted them full political rights. 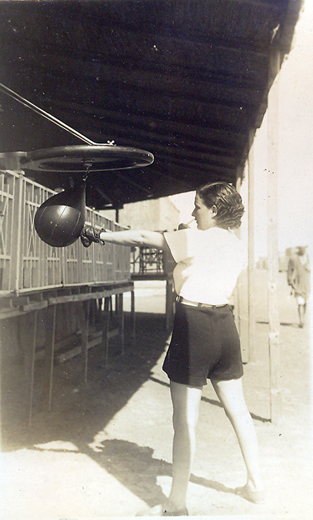 The documentary depicted women who made a difference in Egypt’s modern history: feminist activist and poet Durriya Shafiq (1908 – 1975), Egypt’s first female MP Rawya Attiya (1926 – 1997), and Egypt’s first female ambassador Aisha Rateb (1928 – 2013). It also featured Egypt’s first female mayor Eva Habeel who is also a Copt and a lawyer. In 2011, while in her late forties, Ms Habeel was elected Omda, mayor, of the village of Kombouha in Assiut some 350km south of Cairo; it was then unheard-of that a woman could be mayor of a village.
The documentary also depicted women’s wide participation in the 30 million-strong Egyptian revolution of 30 June 2013 which led to the overthrow of the Muslim Brotherhood regime that had risen to power in Egypt in the wake of the 2011 Arab Spring. It also cited a number of laws passed in recent years in favour of women, and the rise in proportion of female Cabinet ministers to 25 per cent. But, said the documentary, this was not the end of the road; it marked the first steps on the path to Egypt’s 2020/2030 strategy of full equality between men and the long-downtrodden Egyptian women.

Hero mothers
To music of the widely popular songs for mothers “Sitt al-Habayeb” (Best of all beloved ones) and “Ahla umm fil-donia” (Loveliest Mother in the World), President Sisi honoured 24 Egyptian “heroic mothers” who had braved adverse circumstances and single-handedly raised successful sons and daughters. He also honoured foster mothers, mothers of children with disabilities, and mothers whose sons from among the police and military were killed in Egypt’s bitter battle against Islamist terrorists. 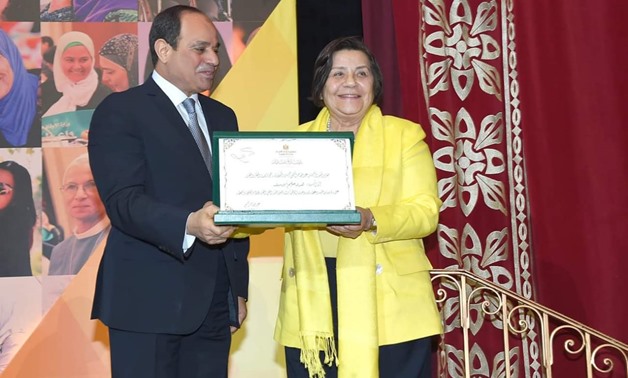 Female figures with distinct contributions to Egypt were also honoured by the President. Among them was Loula Zaqlama who established the first Egyptian media and PR firm; diplomat and politician Mervat al-Tallawy who was in 1985 – 1988 deputy director of the United Nations International Research and Training Institute for the Advancement of Women (UN-INSTRAW); pioneering educator Nawal al-Degwi, head of the board of trustees of Modern Sciences and Arts (MSA) University; pharmacologist Sanaa’ Boutros who has to her credit significant contributions for the treatment of Bilharzia; veteran actress Samira Ahmad; fashion designer, businesswoman, and pioneer of volunteer work Laila al-Banan; banker Amal al-Tobgy; pediatric ophthalmologist Nihal al-Shakankiri; politician Fawziya Abdel-Sattar, the first woman to be appointed to parliament; and Sister Siham Gawdat who heads the Sisters of Charity in Egypt. 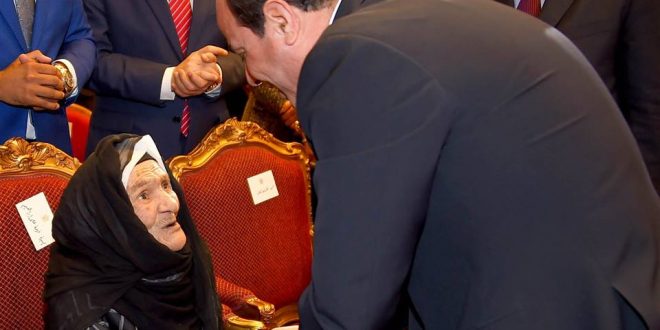 But even before honouring these special women, President Sisi left his seat and headed to the longest living woman in Egypt, 103-year-old Faheema who had donated her life savings to the Tahya Misr (Long Live Egypt) Fund. She had expressed a wish to meet the President who took great care to honour her wish in this celebration, lovingly stooping over to greet her. 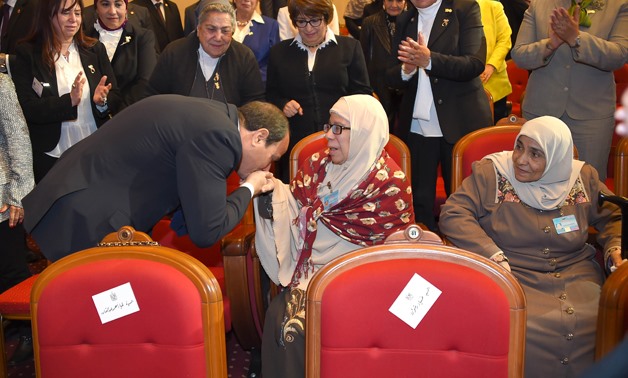 Empowering Women
It was then time for NCW President Maya Morsy to give a speech. Dr Morsy began with a folk saying which she directed to President Sisi, to the effect that one who works to bring joy to oppressed hearts is blessed, and so is Sisi, she said, who has worked to make bereaved mothers, overworked women, and tired souls feel appreciated and happy. 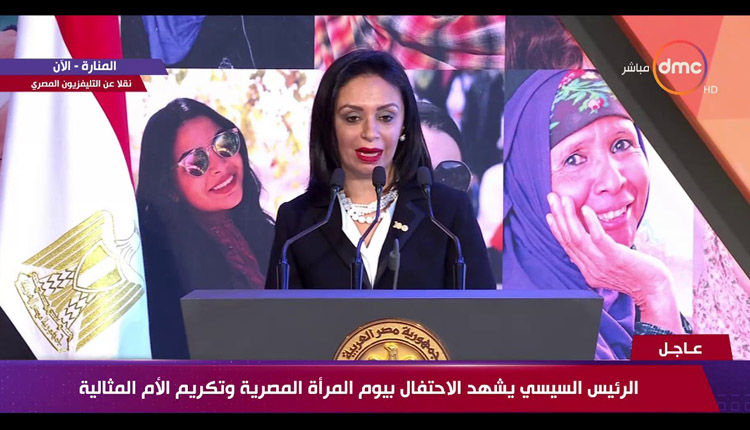 Dr Morsy, who has headed the NCW since February 2016, went on to detail the Council’s achievements, saying that by 2017 it had directly reached 7.5 million women to contribute to their empowerment on various levels.
On the political and leadership enablement level the NCW, Dr Morsy said, was able to reach 3 million women nationwide. But even so, she explained, Egyptian women won a mere 15 per cent of parliament’s seats, lagging behind many other countries. Egypt ranked 135 out of 188 in female parliamentary representation in the world, and 122 out of 149 on political empowerment. “We must work to improve that,” she said.
The NCW, Dr Morsy said, has worked with banks and institutions to empower women economically through programmes of vocational training, capacity building, marketing skills, and financial inclusion. She said that, in this respect, the NCW has reached 126,000 women. She especially applauded the collaboration with Egypt’s Central Bank to empower women financially, terming it “the first of its kind in the world”.
On the health and social levels, Dr Morsy said, the NCW has reached 5 million women in its campaign for early detection and treatment of breast cancer. The Council was also active with programmes that target men and family members to educate them on women’s rights, organising awareness campaigns for men and women contemplating marriage, as well as family camps to highlight erroneous norms against women.

Together for Egypt
Given the pious nature of Egyptians and their esteem for religious figures, Dr Morsy talked of a NCW programme that involves Muslim female preachers and Christian consecrated virgins in local door-knocking campaigns to spread religious tolerance and acceptance of the other. At this point President Sisi made a comment highly praising that programme and giving special thanks to everyone involved in it, “those who work to spread love and peace in the community”.
Dr Morsy then talked of the NCW’s effort to combat violence against women, a topic that has long irked Egyptians. She said the Council has set up hotlines to report incidents of violence nationwide, 18 units in universities to receive complaints about violence against women, and is actively combatting and raising awareness on the perils of under-age marriage. These efforts, she said, go hand in hand with endeavours to pass legislation that would impose harsher penalties for various forms of violence against women.
The NCW President congratulated Egypt’s Micro, Small and Medium Enterprise Development Agency (MSMEDA) for winning the UN’s gender equality seal for 2018. “Egypt is the first Arab country and the second worldwide to win the seal,” she said.
Dr Morsy rounded up her word with citing Egyptian women’s future aspirations: that women would be appointed judges, a constitutional right women have not yet gained; that more of them would attain senior decision-making posts; that legislation would be enacted to protect women against all forms of violence.
“We, the women and girls of Egypt,” she said, “have courageously borne difficulties, strived, and fought battles still alive in the nation’s collective memory, for the sake of our homeland. We have been rewarded with a political leadership that strongly believes in us and supports us.

Fitting reward
The event closed with the word of President Sisi who profusely praised Egypt’s women for their admirable courage and legendary forbearance. He called for a national fund to support Egyptian women, and demanded of the Health Ministry that the campaign for early detection of breast cancer should spread to cover every woman in Egypt. He also called for adopting a national strategy to battle violence against women in all its forms, citing examples such as under-age marriage, forced drop out of school, and unfair alimony rights.
The President said Egypt needs to change the family law so that women should be granted their legitimate rights, and called for wider spread of pre-marriage awareness programmes. Laws should also be changed, he said, to give women wider work opportunities.

The President made special stress on the need for wider female political participation.
“We believe in the Egyptian woman,” he said, “and need every contribution she can make.”
President Sisi then went on to make a surprise announcement that brought on wide jubilation. He said the minimum wage would be raised from the current EGP1,200 to EGP2,000; and the minimum pension would go up to EGP900.
“Women have been the backbone of Egyptian patience and support for the painful economic reform needed for the country to emerge out of the economic downturn it had fallen into [in the wake of the 2011 Arab Spring],” the President said, “and it is fitting that the economic good news should be announced here and now, during this current celebration of women.” Well said, Mr President!