Under the motto “Investing in Stability”, leaders from the European Union (EU) and the Arab League (AL) met on 24 and 25 February in the South Sinai resort of Sharm al-Sheikh for their first summit. The two-day summit was jointly chaired by President Abdel-Fattah al-Sisi and European Council President Donald Tusk, and aimed to boost cooperation and discuss common challenges such as migration, security and trade, and investment.

Given that the population of the EU and the Arab World amounts to some 12 per cent of world population, Europeans, according to AFP, view the summit as a way to protect their traditional diplomatic, economic and security interests. This is especially significant at a time when China and Russia move to fill the vacuum left by the United States who is disengaging from the region.

In a pre-summit press release, the EU explained that the decision to organise the summit was taken following informal meetings of EU heads of state or government in Salzburg in September 2018.

Representing the EU in the Cairo summit were European Commission President Jean-Claude Juncker; and Federica Mogherini, Vice President of the European Commission and High Representative of the EU for Foreign Affairs and Security. Secretary-General of the AL, Ahmed Abul-Gheit was also there. Saudi Arabia’s King Salman; German Chancellor Angela Merkel; and British Prime Minister Theresa May also participated, among representatives of 50 Arab and European States.

Climate change, migration, trade and investment, as well as the Israeli-Palestinian situation and conflicts in Syria, Yemen and Libya were discussed during the summit’s sessions. A number of bilateral meetings were held on the sidelines of the summit, including one to one meetings between UK Prime Minister May and EU’s Tusk and Juncker to discuss Brexit.

In his opening speech, President Sisi said that the summit was proof that what brings the two regions together outweighs what separates them. He talked about the terrorism threatening the Middle East and Europe, appealing to the attendants to strongly join efforts to combat terrorism. “Has not the time come to agree on a comprehensive approach to combat terrorism?” Sisi asked, insisting that anything short of that was destined to fail. “The picture is in fact bleak at present,” he said, warning of “mounting risks and challenges” including increased terror and illegal migration.

The President said that illegal migration, a problem facing many European countries, could be dealt with “not as a challenge but as an opportunity for cooperation”. He called for setting a joint framework that would allow “organised and safe” migration to Europe, and benefit the EU and the Arab region. “The surplus labour Force in the Arab World could perfectly fit the needs of industrialised Europe,” he said. He remarked that it was difficult to face perils of terror and illegal migration individually, calling upon everyone to put together a “joint vision” to deal with them. “Terrorism has become a tool used by some nations to create chaos in specific territories to benefit at their expense,” he said.

Sisi called for resolving the Arab-Israeli conflict, warning that failing to do so could have dire repercussions on the region. He said that settling this conflict would deny the “forces of extremism and terrorism” the chance to recruit youth raised amid the strife.

He also called for settling the wars and conflicts in Libya, Yemen and Syria, remarking that “future generations will hold us accountable for failing to do so”. President Sisi also called for Arab and EU economic cooperation.

Tusk: Cooperate instead of leaving matters to global powers

On his part Tusk agreed with Sisi that “there are differences between us”, but said neighbours have more at stake than distant powers. 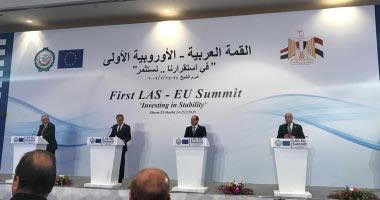 On his Twitter account, Tusk wrote on the first day of the summit: “There are differences between us. But we face common challenges and have shared interests. We need to cooperate and not leave it to global powers far from our region.”

At the closing session President Sisi called on Arab and European nations to “overcome what could divide us”. He described the results of the summit as “exceeding all expectations,” despite varying opinions about the identification of the causes or ways of dealing with a number of topics. He said that the summit had seen fruitful and constructive discussions, and said he was confident that it will contribute in clarifying visions and shaping a common strategy and approach to a number of issues of common interest. 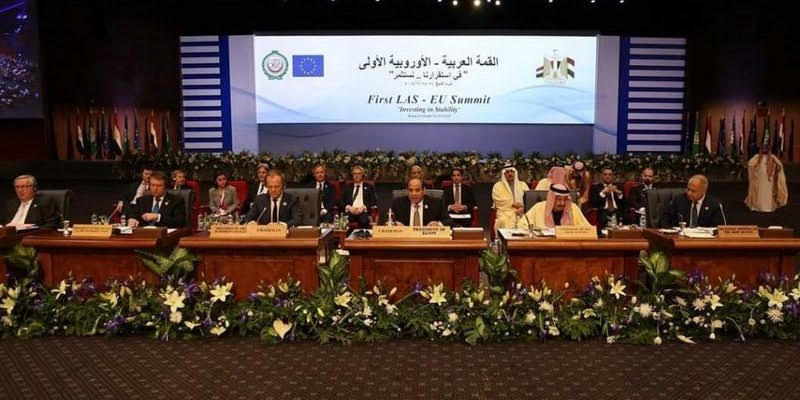 “Respect us as we respect you”

At the closing press conference which included Sisi, Tusk, Juncker and Abul- Gheit, President Sisi determinedly addressed the rights group and nations which condemn the death penalty in Egypt. He addressed European countries which have abolished the death penalty: “We value and respect what you say about the death penalty, but please do not impose it on us, we have a different culture. When a human being is killed in a terrorist act, families of the victim call for retribution; in it they demand what they see as the rightful avengement of blood,” he proceeded. “This culture exists in our region, retribution is given through the law.

“We have two different cultures. The priority in Europe is achieving and maintaining wellbeing for its people. Our priority is [survival], the preservation of our countries and making sure they don’t collapse in destruction and ruin, as you see in many surrounding States,” he said. “You are not going to teach us about humanity, Europeans and Arabs have a different sense of humanity, values and ethics. Respect our values and ethics, as we do yours.”

Rights activists had condemned the fact that human rights issues did not feature on the summit’s agenda, yet many of the attendants, including the European Commission President and the German Chancellor confirmed to the press that human rights had been raised in bilateral meetings. The Secretary-General of the AL, however, said that no party in specific had expressed dissatisfaction with human rights in Egypt during the summit’s meetings. He said that he made a point of mentioning this during the closing press conference in front of the Arab and European representatives taking part in order to confirm the veracity of what he claimed. Merkel told reporters that during the summit she had raised the importance of improving the level of economic prosperity among the AL countries. She said this could only be achieved through the work of the civil society, and through respecting human rights and involving youth.

Leaders had thorough discussions on ways to achieve political solutions in Syria, Libya and Yemen in line with relevant UN resolutions.

European Council President Donald Tusk described the summit as a “new chapter of cooperation between the Arab World and Europe”, adding that the summit is the beginning of a frank and substantive conversation between the two regional blocs. Tusk remarked that EU and Arab leaders “have no alternative but to work together” on shared challenges, including terrorism, climate change and ensuring sustainable growth, especially that “the rules-based global order is clearly under threat,” he said. “Multilateral solutions remain the best way to address threats to international peace and security,” Tusk commented. “We want to develop common projects from energy, security to technology to tourism and trade, that will encourage the investment and sustainable growth that our peoples need,” Tusk said. He added that Arab and European countries aim to address the root causes of terrorism and strengthen their efforts in the fight against cross-border terrorism.

Secretary-General of the AL, Ahmed Abul-Gheit praised the organisation of the event which was well attended. He pointed out that, as per the request of the European side, most of the meetings of the summit were closed since the points of discussion were highly sensitive and were candidly discussed. Abul-Gheit said that these meetings reflected a shared vision and common hope for the future.

At the end of the summit, a declaration was issued by the participants confirming that they agreed to reaffirm their strong regional cooperation in order to find solutions to the current common challenges between EU and AL countries. They agreed to deepen the strategic partnership among the participating countries, in order to “to promote peace, stability and prosperity, guarantee security, foster economic, social and technological development and to create mutual opportunities through a collaborative and cooperative approach, placing the people of our regions, and in particular women and young people, at the centre of our endeavours,” the declaration read. It also said that the summit agreed to strengthen cooperation towards security, conflict resolution and socio-economic development throughout the region, as well as strengthening economic cooperation. The summit also declared a common position vis-à-vis the Middle East Peace Process, and the situations in Syria, Libya and Yemen. The declaration asserted a common resolve to “combat cultural and religious intolerance, extremism, negative stereotyping, stigmatisation and discrimination leading to incitement to violence against persons based on religion or belief and condemn any advocacy of religious hatred against individuals that constitutes incitement, hostility or violence, including on the internet and social media.”

The summit agreed to hold regular EU–AL summits, alternating between Arab and European states, and announced that the next summit will be held in Brussels in 2022.