Sisi in Munich: “I am the first president of an Islamic country to call for reform of religious address”

Egypt’s President Abdel-Fattah al-Sisi was among more than 600 high-level international decision-makers from politics, business, academia, and civil society participating in the two-day Munich Security Conference (MSC) held earlier this month in Munich.
Described as the “Academy Awards for security policy specialists”, the 55th MSC comprised debates, speeches, and sideline meetings that focused on international defence policy.
Apart from the issues of security and defence, President Sisi used his Munich visit to meet heads of States and leading industrial powerhouses. He was in talks with high-ranking officials from the German firms of Daimler and ThyssenKrupp to discuss cooperation with Egypt.

Africa: The future
President Sisi attended the conference in his capacity as this year’s chairman of the African Union, a role he assumed earlier this year. He highlighted security challenges facing the African continent, migration issues, and means of fighting terrorism.
“The challenges of the age are too big for a single country or assembly to handle,” President Sisi said. “We are witnessing armed conflicts, wars, ethnic conflicts, terrorist attacks, in addition to the problems of poverty and unemployment.
“These challenges have been further compounded by international polarisation and escalation of political confrontations, as well as the challenges of nature, such as climate change, desertification, water scarcity and others.”
The President highlighted the importance of economic development, especially post-conflict development, in many African countries. “Egypt welcomes cooperation with all international partners to establish security and achieve African economic development,” he said. “Investment in Africa means investment in the future.”
The issue of security, however, was obviously paramount on the President’s agenda. “Terrorism,” he said, “leads to the destabilisation of societies. This requires everyone to make vigorous and sincere efforts to uproot this abhorrent phenomenon, which is the first threat to the pursuit of development, including cracking down on terrorist groups.” 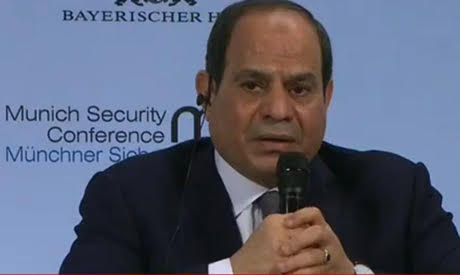 Terror on cyberspace
On a panel with Romanian President Klaus Iohannis and Chairman of the MSC Wolfgang Ischinger, President Sisi called for global action against extremism promoted online and spread over digital platforms, claiming that inaction was swelling the ranks of terrorist groups.
“As far back as 2014,” President Sisi said, “we called on the world to tackle the use of advanced technology to recruit terrorists and bring harm to the world by spreading extremist and Islamist address,” he said. “People are lured by the extremist address to bring killing to the world. We need measures at the international level but we have not found listening ears to our request.
“We have seen the impact of religious extremism on our countries and Europe,” he said. “I am the president who is bringing reform to the religious metric by speaking to the biggest institution in Egypt [al-Azhar, the topmost authority on Sunni Islam in the world] and telling them that not doing so will bring suffering to the Muslim World.
“Our country is responsible for presenting a moderate image of Islam to the world,” he added. “For example in Egypt we refuse to use the word minority, we say our Coptic Egyptian brothers. We don’t only ask for dialogue, we adopt practices that develop tolerance and co-existence. The church and the mosque are components of any new community in Egypt. Actions speak louder than words. This is the example Egyptians follow; it will go out of Egypt and into the Arab World.”
The President said States around the world needed to ensure that extremist addresses were banished from places of worship.
“Please be mindful of what is being promoted at houses of worship; do not allow extremists to talk to the people because they will lure them in,” he said. “Who created the foreign fighters and brought them into Egypt? We see the consequences.”

EU-Arab League summit
Alongside President Iohannis who is the current President of the Council of the EU, President Sisi said he looked forward to the EU-Arab League summit to be held in the Egyptian Red Sea resort of Sharm al-Sheikh on 24 February. Egypt’s President said the gathering would see reinvigorated cooperation on the issue of migration as he acknowledges that instability in the Arab and African nations had spilt into Europe.
“When we speak about progress, we have become a small village where we affect each other,” he said.
“Stability in the Arab world affects our friends in Europe. Migration is caused by instability in some countries.”
Europe works closely with the Arab League members, particularly in North Africa to manage migration flows and share information on terrorism. Most European leaders believe the partnerships have brought results as migrant flows into Europe from North Africa through the Mediterranean tapered off.