Egypt’s President Abdel-Fattah al-Sisi has participated in the two-day G20 Summit in Osaka, which wrapped up on 29 June. It was the 14th meeting of the Group of Twenty, hosted for the first time by Japan, and following the 2018 Summit in Beunos Aires. The next G20 Summit will be held in Riyadh in 2020.

Japanese Prime Minister Shinzō Abe, whose country held the 2019 G20 Summit presidency, invited President Sisi to the Summit in his capacity as Chairperson of the African Union for 2019. 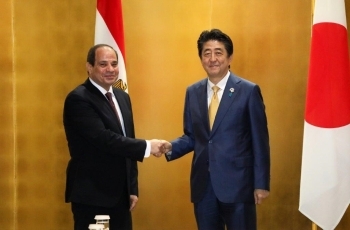 In his speech at the G20 Summit in Osaka, President Sisi spoke of the “multidimensional challenges facing the international community and especially the African continent”: realisation of peace and security, putting an end to poverty, battling disease, tackling climate change, confronting illegal migration, and more. He presented before the Summit the collective African view on these problems, emphasising the need for a concerted global effort to fight terrorism and extremist thought, given the direct relationship between stability and sustainable development. The framework of global economic governance, President Sisi said, needs to change so as to accommodate the developing world, especially Africa, in decision making. He welcomed collaboration with the G20 group to achieve sustainable development in Africa according to the continent’s 2063 perspective, stressing that collaboration should fulfill the interests of all parties involved while refraining from the imposition of political restrictions or specific economic or social models. Despite the numerous challenges, he said, Africa has a lot to offer in terms of lucrative opportunity and vibrant markets.

President Sisi went on to review the work Africa was doing on its own to achieve development. He cited the African Continental Free Trade Agreement between 49 African Union member States, which has gone into effect on 30 May 2019; renewable energy, especially solar energy, projects; and trans-border projects already underway to upgrade infrastructure. In parallel, he said, Africa was in its way to sound economic governance through implementing adequate management systems, enhancing competence and effectiveness, providing investment-friendly climate, empowering women and young people, and fighting corruption.

“An objective look at our continent today,” President Sisi concluded, “shows that Africa makes 17 per cent of world population, and is set to grow to a quarter of the world population by 2050. Partnership with Africa, therefore, is not a viable option but an inevitable decision.” 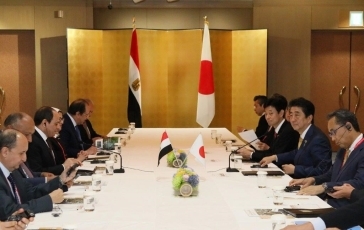 Delivering a speech at the session on inequality, President Sisi highlighted the major axes through which Egypt is working to address the issues of inequality and the empowerment of women, citing the recent constitutional amendment to increase the representation of women in parliament to 25 per cent, and the programmes launched by the State to empower women.

President Sisi stressed the African development priorities 2063 and China’s possible role in fulfilling them through joint infrastructure mega-projects such as a Cairo – Cape Town road, and a navigational route between Lake Victoria and the Mediterranean. Such projects, the President said, should serve to enhance inter-African trade, and work to bring jobs and prosperity to Africa, especially given that the African Continental Free Trade Agreement has gone into effect on 30 May 2019. President Sisi also drew attention to the promising role that could be played by Egypt’s Suez Canal economic zone, projected to become a global economic and logistics hub, in the Chinese “Belt and Road” initiative which aims at enhancing trade, investments, and infrastructure in more than 150 countries in Asia, Europe, Middle East, Africa, and Latin America. 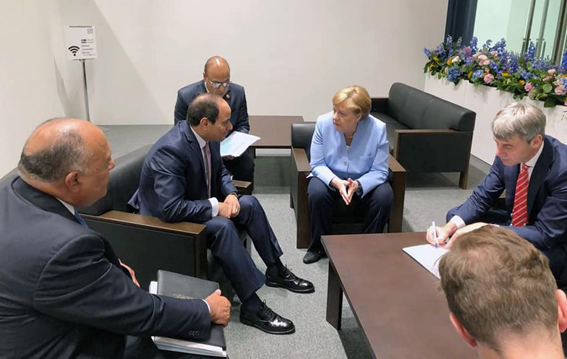 On 27 June, a day before the G20 Summit took off, President Sisi saw Shinzo Abe, Prime Minister of Japan, in a 15-minute meeting. Mr Abe said: “Egypt is an important partner in the Middle East and Africa, and I appreciate Egypt plays a role in regional peace and stability.” He said he was happy with the progress on Japanese-Egyptian projects, including the Egypt-Japan Education Partnership and the construction of the Grand Egyptian Museum.

“I will work on strengthening our economic relations,” he said, “and I would like to request your further support towards improving the investment environment.”

President Sisi welcomed the new Reiwa period, and congratulated Japan for holding the G20 presidency. He voiced his expectations for more investment in Egypt by Japanese companies, and an increase in tourists from Japan. The President also welcomed the dispatch of Japan Self-Defense Forces personnel to the Multinational Force and Observers (MFO). Both leaders agreed on working towards strengthening bilateral relations.

Talks between President Sisi and Prime Minister Abe also covered preparations for the seventh summit of the Tokyo International Conference on African Development (TICAD) which will be hosted in Yokohama, Japan, next August.

President Sisi held meetings with a number of Japanese businessmen and chairmen of the largest Japanese companies operating in Egypt to discuss means of boosting cooperation in the fields of economy, trade and investment. 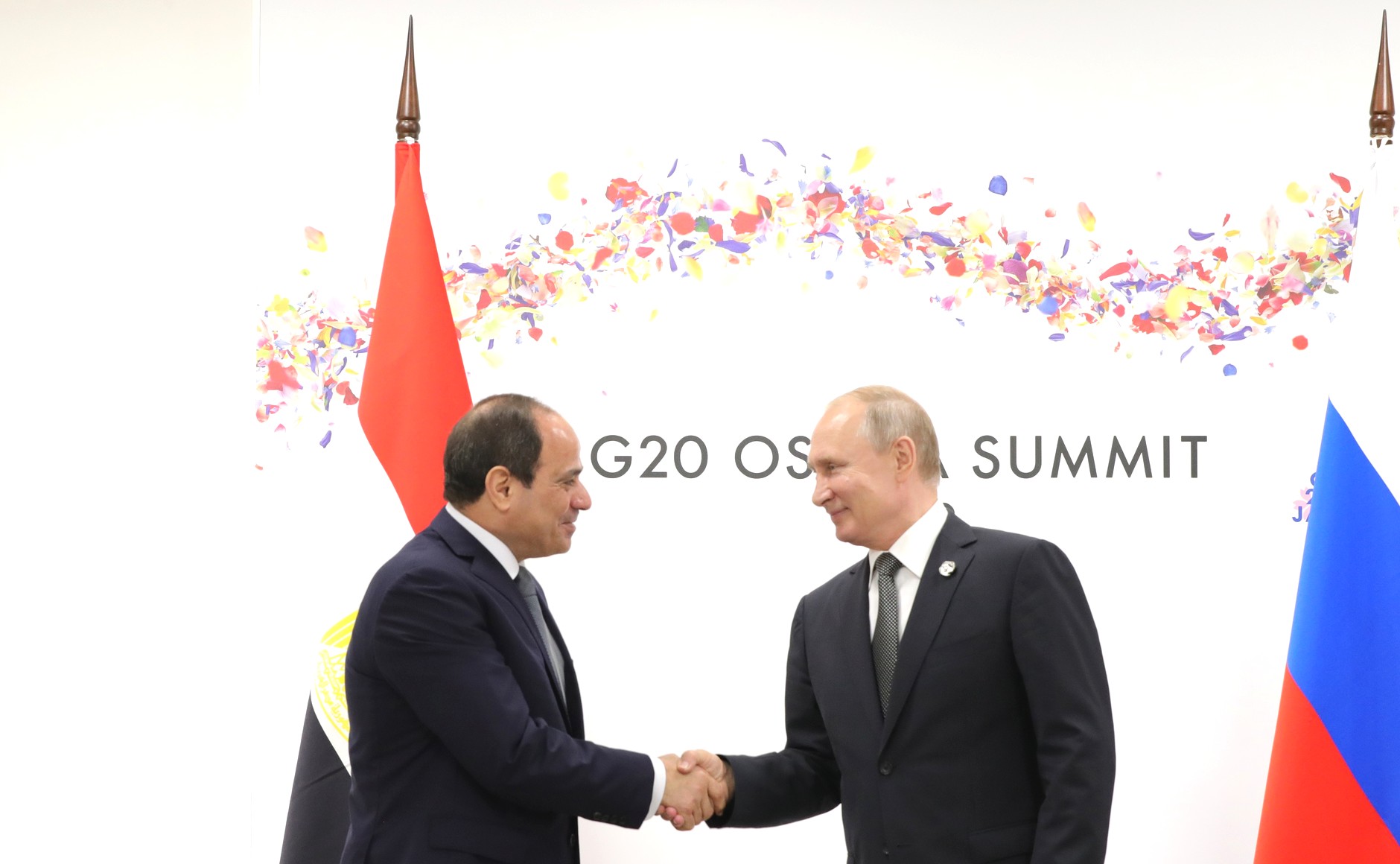 President Sisi met his Russian counterpart Vladimir Putin on the sidelines of the G20 summit in Osaka.

President Putin expressed his happiness at meeting President Sisi and said that relations between Egypt and Russia were developing dynamically, “and we have plans to elevate them to a new and more advanced level, since this is the objective of the Treaty on Comprehensive Partnership and Strategic Cooperation which we signed during your visit to Russia in October 2018”, he said to Sisi.

Mr Putin said he appreciated President Sisi’s work as co-chair of the Russia – Africa Summit to be held in October in Sochi, Russia, hoping to create a new impetus for developing relations between Russia and Africa.

For his part, President Sisi asserted to his Russian counterpart the significance of Russia’s relations with Africa, especially in restoring the role of the national institutions in Libya and supporting its army.

The Egyptian President said Egypt’s relationship with Russia was of utmost importance, and expressed readiness to foster and enhance bilateral relations at various levels, including the strategic level. He praised the major joint projects implemented in Egypt with Russian financing and expertise, including the al-Dabaa Nuclear Power Plant, and the Russian Industrial Zone in the Suez Canal Economic Zone, which is expected to take economic bilateral relationship to a wholly new level. “We are always committed to cooperation and developing relations in all areas,” President Sisi said, “especially in economy, trade, and countering terrorism. Thank you very much for the opportunity to take advantage of Russian knowledge and expertise.”

Egyptian-German bilateral relations came into focus during a meeting between President Sisi and German Chancellor Angela Merkel in Osaka on the sidelines of the G-20 summit.

President Sisi lauded the great leap in bilateral relations between Egypt and Germany in all fields, and voiced keenness on further engaging with Germany in development plans for Egypt and Africa. Ms Merkel hailed the unprecedented momentum recently witnessed between the two countries on the economic and trade fronts, saying that Egypt was one of Germany’s key partners in the Middle East. She affirmed Germany’s keenness to back Egypt’s ambitious development plans, through increasing investments and transferring German expertise and technology.

Ms Merkel also stressed coordination with Egypt as a leading European partner in the fight against terrorism, illegal migration, and developments on the Libyan front.

The two sides also discussed means of promoting frameworks of trilateral cooperation between Egypt, Germany and the rest of Africa

From unrest to buoyancy

In talks with the Saudi Crown Prince Mohammed bin Salman, President Sisi discussed the Syrian crisis and views on the latest developments in the Gulf region.

The President also met Italian Prime Minister Giuseppe Conte to discuss the two countries’ mutual interest in further investigating the case of the murder of Italian student Giulio Regeni in Egypt back in 2016. They also discussed recent regional developments, during which President Sisi stressed the necessity of reaching a peaceful political settlement for the Libyan crisis.

During his meetings, President Sisi underlined the fact that Egypt has transitioned from a severely disrupted country in 2011 to one today enjoying high economic performance, development rates exceeding 6 per cent, and record foreign currency reserves.