In a landslide vote of 97 per cent, President Abdel-Fattah al-Sisi has won a second four-year term, according to Egypt’s National Elections Authority (NEA). Voter turnout stood at some 41.5 per cent of eligible voters, a high turnout by Egyptian standards where voters are notorious for their reluctance, and given that Sisi’s popularity secured him a win. The challenge was that a strong turnout would give him a mandate. The NEA pronounced the vote as free and fair.
The only candidate who ran against President Sisi was Moussa Mustafa Moussa, head of al-Ghad political party; the NEA said that Mr Moussa won 2.92 per cent of valid votes. The number of invalid ballots was 7.27 per cent of the total votes, the NEA said.
Other candidates had either withdrawn from the race early on in January, or were disqualified on legal grounds. In all cases, however, none of the potential candidates matched President Sisi’s popularity and credibility even though the economic reform and austerity measures he implemented have hit Egyptians hard.

US embassy “impressed”
During voting last week, the US embassy in Cairo said on Twitter it was “impressed by the enthusiasm and patriotism of Egyptian voters”.
Russia congratulated President Sisi on his election win ahead of the official results. Other congratulations from all over the world flowed in once the results were out.
The Coptic Orthodox Church issued a statement signed by Pope Tawadros in which it offered heartfelt congratulations to President Sisi on winning a vote of confidence by the Egyptian people to a second term. It expressed hope for continuing achievement on the fronts of development, building the country, and defeating terrorism. “We offer you,” the statement said, “our sincere love and appreciation as president, leader, and pride of our beloved homeland, Egypt.” 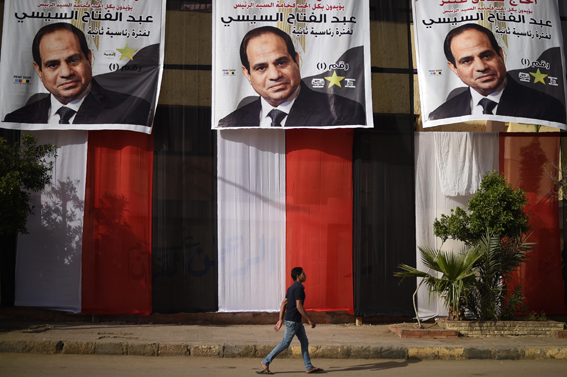 Without discrimination
In his first speech after winning the election, President Sisi promised that among the priorities of his second term would be to work on more inclusive, collaborative grounds.
“I promise to work for all Egyptians without discrimination. Those who renewed their confidence in me [with their votes] are not different from those who did otherwise. Egypt includes all, as long as a difference in opinion doesn’t spoil a nation’s cause,” the President said in the televised speech.
“Common grounds,” he said, “are greater and more welcoming than fixed ideologies or narrow interests.”
The President ardently thanked Egyptians for their support. “My confidence in the intelligence of the Egyptian nation has been proven time and again,” he said, adding that his bet on the Egyptian people had not faded and that they did not let him down.
The President also thanked sole contender and Ghad Party chairman Moussa Mustafa Moussa, describing him as one who waged “a patriotic and noble electoral battle.”
President Sisi concluded his speech with his by-now famous “Long live Egypt” three times.
Earlier, Mr Moussa had thanked Egyptians for enthusiastically turning out in the presidential elections, saying their participation proved the people of Egypt are capable of facing all challenges and pressures. He saluted the re-elected president and wished him best of luck, affirming that President Sisi is the best person for the post.
On his low percentage of votes, Moussa said if any other candidate ran in the elections race against President Sisi, that candidate would have got lower votes than Moussa himself even gained.
President Sisi will be sworn in at the House of Representatives in Cairo in June.

Egyptians can never forget
Despite the fact that many in the international media insist on defining President Sisi as the “military commander who led the 2013 military overthrow of Egypt’s first freely-elected president, [the post-Arab Spring] Muhammad Mursi of the Muslim Brotherhood”, Egyptians see him in a diametrically different light. They can never forget that it was General Sisi who responded to their 30-million-strong revolution against Mr Mursi on 30 June 2013. Back then, he gave Mr Mursi a 48-hour ultimatum to resolve the crisis before it escalates into civil war, an ultimatum that was belligerently rejected. On 3 July 2013 Mr Mursi was overthrown and the head of the country’s Supreme Constitutional Court instated as interim president; Egypt embarked on the path to secularity instead of the post-Arab Spring Islamism.
Critics of President Sisi claim he has cracked down on dissent, but mainstream Egyptians carry a different opinion, given the Islamic terrorism Egypt is battling. This was obvious by the landslide vote he was given for a second term.