As chairman of the African Union (AU) for 2019, Egypt’s President Abdel-Fattah al-Sisi gave a televised speech to mark Africa Day on 25 May 2019. The date marked 56 years on the foundation of the Organisation of African Unity (OAU) in 1963, which was established in Ethiopia’s Addis Ababa and was replaced by the African Union in 2002.

When he took up the AU chairmanship in February 2019, President Sisi pledged to focus on issues of peace and security for the continent, and to prioritise reconstruction and development in post-conflict zones.

On Africa Day, the President called on African countries to maintain their unity, in order to fulfill the AU founders’ dream of a thriving continent. He asked to rally efforts to achieve the aspirations of African nations in stability and prosperity.

“We have to strive towards developing our human resources and training the young people of the continent to keep pace with modern-age developments, to be capable of fulfilling their missions in leading the future of Africa,” President Sisi said.

The President made special focus on boosting the role of African women whom he described as the “beating heart” of communities, capable of spearheading the drive for prosperity. He also called for stronger cultural ties between nations, with the objective of consolidating African identity and promoting African solidarity. 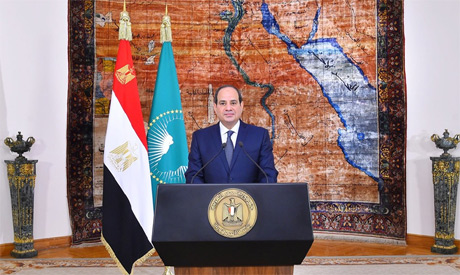