The greatest is love

That fateful night when Pope Shenouda III’s body was laid to rest, I sat listening to the sound of the Midnight Praise, trying to gather my thoughts. Pope Shenouda was, for me as well as

That fateful night when Pope Shenouda III’s body was laid to rest, I sat listening to the sound of the Midnight Praise, trying to gather my thoughts. Pope Shenouda was, for me as well as for countless Copts, no mere remote figure of a head of Church, but a ‘father’ whose heart sensed our happiness, anxiety, and fear; and whose prayers buoyed us in times of trouble—and these had lately become ever so frequent. His ‘closeness’ to each of us was a palpable reality that could not be denied. And his loss on that Saturday evening of 17 March was a heartache I—and I am sure countless others—were straining to come to terms with.
Eternal life
The Pope had written about “The Release of the Spirit”, and it was now the turn of his own spirit to set out on its eternal journey to meet its Creator in the place that knows no woe, despair or exasperation.
Three scenes dominated by Pope Shenouda filled my thoughts, but the image of the mummified body of the Pope seated serenely on the throne of St Mark at St Mark’s Cathedral in Cairo lingered before my eyes. It is with this I would like to begin.
The scene of the Pope seated on the throne of St Mark after his spirit had renounced its worldly being and set out on its journey towards the eternal life he had so longed for will forever remain fresh in my mind.
Probably the most direct and simple explanation for the “release of the spirit” is when the spirit departs from the body, which then returns to the dust it originally came from. More intriguing, however, is how the spirit may be released from the body while the body is still on earth, well and alive.
Pope Shenouda more than once wrote and talked about this crucial and fundamental issue: how can one be free of the worldly constraints of the flesh and the mind so that the spirit may soar, free of all ties, and ultimately unite with its Creator?
Release of the spirit
“The spirit transcends the senses,” Pope Shenouda wrote in his The Release of the Spirit, first published in 1957 and reprinted several times. “At times,” he wrote, “the senses are partially or fully interrupted as the spirit engages itself with something more sublime. Awareness of the world and all it holds is arrested while the spirit steeps itself in divinities.”
This issue becomes particularly significant in these times we live in, when the burdens and squabbles of the materialistic world hold sway.
“And now, what can I say?” the Pope asks in his book. “Do I say that the spirit should transcend the scope of human wisdom? This human wisdom that lets humans put God, His attributes and His teachings under the microscope? The wisdom that drives some to accept only [the parts] of the Bible and the Church’s teachings which they see as correct, and reject what does not comply with their common sense?”
In another passage from the The Release of the Spirit, Pope Shenouda writes, “Some legends say the Red Sea did not split when Moses hit it with his rod, but when the first foot from among the multitude set out to step onto the water. It is but a legend, yet it depicts a refined facet of the spiritual.
“The Spirit that wishes to set out, dear brother, is the spirit that is totally aware of its worth. It knows that it is much finer than to be subjugated by the body, environment or demons. As an image of God, dear brother, eternity was bestowed on you. It is impossible that you perish. Does it make sense that a being created in the image of the eternal God should perish?”
Final sermon
The second scene that will remain forever engraved in my memory is Pope Shenouda’s last sermon on Wednesday 7 March, exactly 10 days before he died. Despite his illness, the Pope delivered his usual sermon, as he did every Wednesday evening at St Mark’s Cathedral in Abassiya, Cairo and, as usual, it was attended by thousands of Copts. On that last Wednesday, how can I forget the Pope’s sigh of pain or his eyes raised to heaven? Even in his 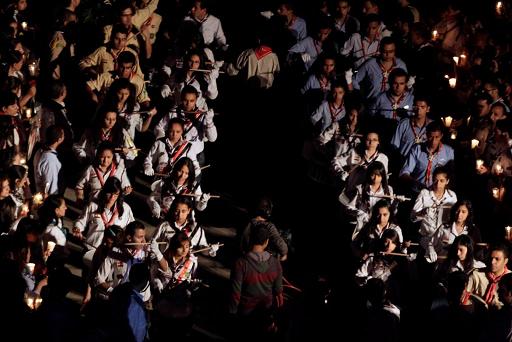 pain and illness the Pope was keen to honour the vow he assumed in 1971 to maintain communication with his congregation. The shepherd’s insistence on being among his sheep until the very last moment was exemplary evidence of his loyalty and devotion.
It is very difficult for any public figure to gain the consensus of all, especially during these turbulent times that are enveloping our Egypt. But Pope Shenouda gained the love and veneration of all. Now that he is no longer there, the reason appears all too obvious: he was a father to all.
Farewell note
This brings me to the third scene that left a lasting impact. Last Christmas, the Pope sent to the Copts of the Diaspora a letter with greetings for Christmas and New Year. Any reader of the literature of his letter will soon realise that the Pope’s final message to emigrant Copts held much more than a usual seasonal note. It was actually a farewell letter in which he asked his children to love one another as mentioned in the Holy Bible: “And now these three remain: faith, hope and love. But the greatest of these is love.” (1Cor/13:13)
This is how the master and the father bade his children farewell, leaving them a legacy of love, not just through his will but through a life that fully radiated with love.
WATANI International
22 April 2012