Reporting and photos by Nasser Sobhy

Holy Mass was held today—the final day in a special three-day fast declared by the Coptic Church and joined in by all the other Churches in Egypt—in churches all over Egypt. Special

Holy Mass was held today—the final day in a special three-day fast declared by the Coptic Church and joined in by all the other Churches in Egypt—in churches all over Egypt. Special prayers were raised for Egypt and its national unity, the Coptic Church and a new pope to succeed Pope Shenouda III who died last March, and to commemorate the Maspero martyrs.
At the St Mark cathedral in Abassiya, Cairo, the Churches representing the various Christian sects in Egypt all joined the Orthodox Copts in prayer. The acting patriarch Anba Pachomeus presided over the Holy Mass in which the archbishops and bishops of the Holy Synod of the Coptic Orthodox Church took part. Also participating were Anba Yuhanna Qolta, Assistant to the Patriarch of the Coptic Catholic Church, Rev. Safwat El-Bayadi, Head of the Evangelical Community in Egypt, Rev. Mounir Hanna, Head of the Episcopal Church, along with the members of the Coptic Orthodox Holy Synod and Melli Council.
The families and friends of the Maspero victims were all there. After Mass, Anba Pachomeus gave each of the 27 families a memorial gift to commemorate their lost ones. The Copts who lost their lives a year ago in Maspero, Cairo, shot by security forces or crushed under military vehicles, had been among a several thousands strong peaceful demonstration of Copts protesting against the gross injustice to the Copts in Merinab, Aswan, and burning their church. To date, no culprit has been brought to justice.
The Maspero incident actually occurred on 9 October 2011, but the commemoration was held today since the acting patriarch Anba Pachomeus, together with other members of the papal election committee, will be leaving Cairo tomorrow to the monastery of Anba Bishoi in the Western Desert. During a two-week retreat, the committee will short-list the 17 candidates for the papacy to seven or five candidates, among whom the Coptic Orthodox electoral college will elect three names for a draw on the altar during Holy Mass, to name the new pope. 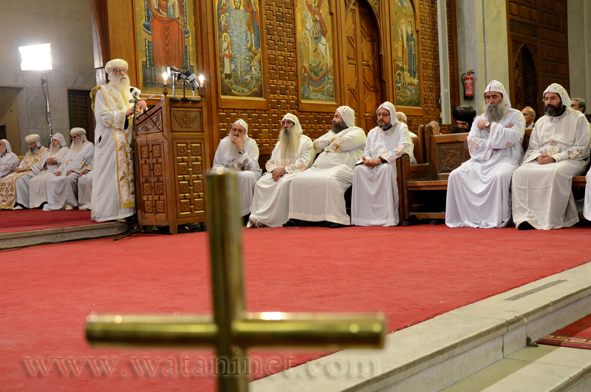 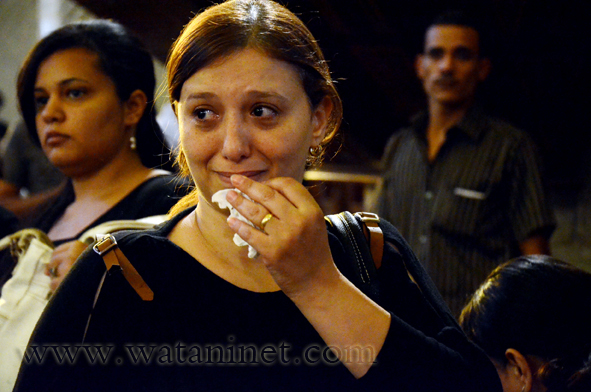