Orthodox patriarchs in Land of the Cedars

Pope Tawadros II is now back home in Cairo following a four-day visit to Lebanon to which he had flown on 20 June to participate in a summit of Oriental Orthodox Churches. 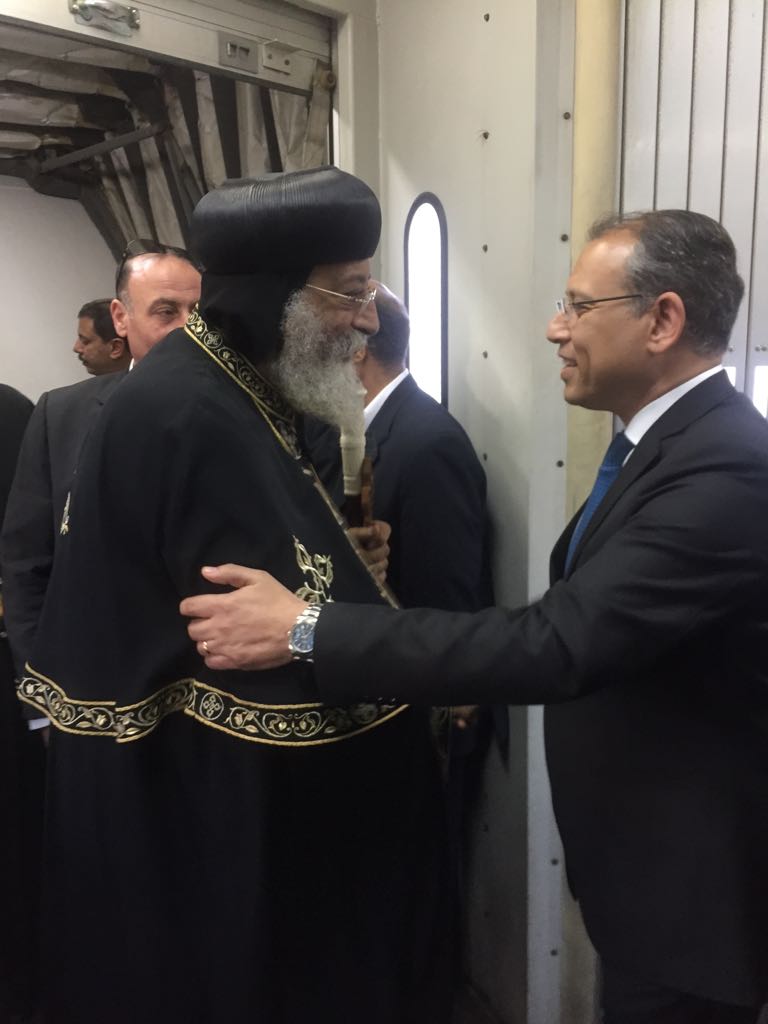 Accompanying the Pope were Anba Bishoi, Metropolitan of Dumyat and Kafr al-Sheikh; and Anba Martyros, General Bishop of East-of-the-Railway Churches in Cairo; a number of clerics and papal secretaries; and Girgis Saleh, honorary Secretary-General of the Middle East Council of Churches.

Once he landed in Beirut, Pope Tawadros visited the Coptic church of the Holy Virgin and St Mark. He officiated Vespers service and held his weekly Wednesday prayer meeting there, then mingled with the Coptic congregation that was jubilant to meet him. 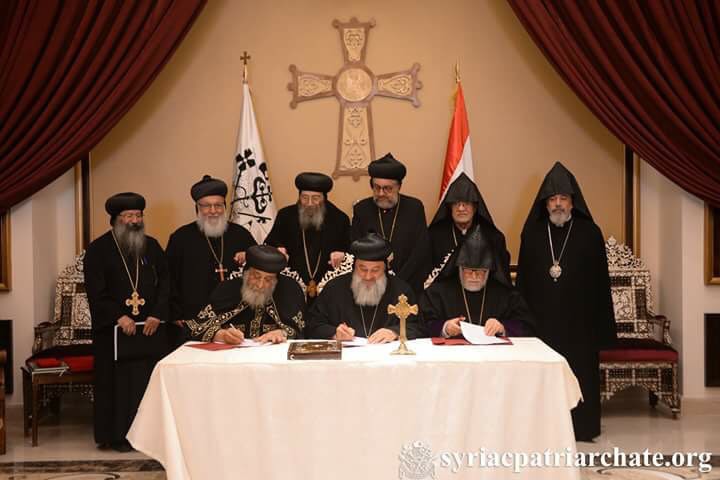 The following day, 21 June, saw the Twelfth Meeting of the Oriental Orthodox Churches begin. Participating were Pope Tawadros, Syrian Orthodox Patriarch of Antioch and All East Mar Ignatios Aphrem II, and Apostolic Armenian Catholicos Aram I of the Great House of Celicia. They issued a joint statement that focused on issues of significance and common interest, major among which is the plight of Christians in the Middle East, their pain, persecution, displacement and ruined homes and churches owing to the wars in the region; as well as the two bishops kidnapped by Islamic militias in Aleppo: Mar-Ignatios Yohanna Ibrahim and Boulos Yazigi. The patriarchs called for prayers of the faithful, and intervention by the international community. 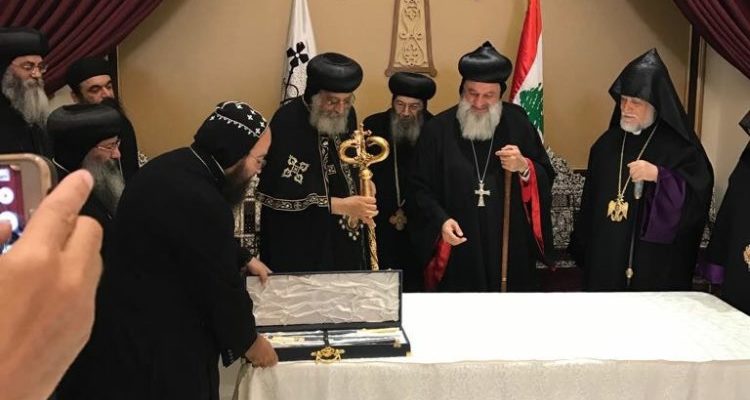 The statement also expressed concern at the internal divisions of the Syrian Orthodox Church in India. According to a suggestion by Catholicos Aram I, it was proposed that the two Indian disputing factions would each send three representatives to Egypt where an attempt will be made at reconciliation.

The statement alluded to the meeting scheduled for next year, which will be hosted by the Coptic Orthodox Church in Egypt. The meeting is expected to gather the two families of Orthodox Churches with Chalcedonian Orthodox Churches as well as Catholic and Anglican Churches. Detailed mention was made of efforts with various Churches at understanding and resolving differences on the theological level. 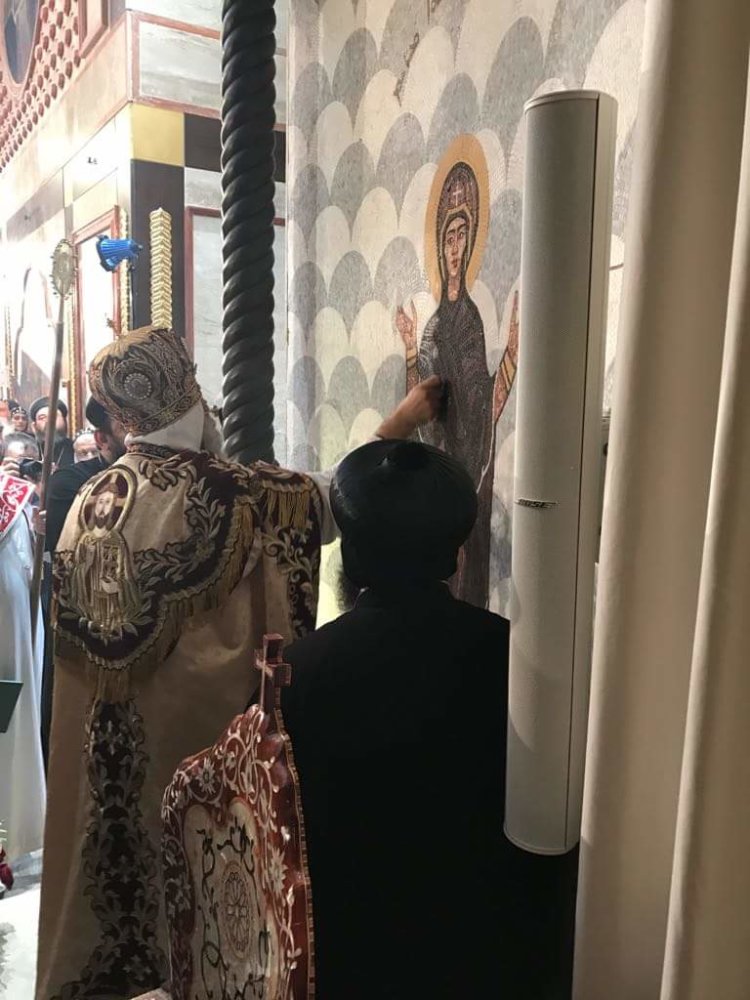 Oriental Orthodox Patriarchs’ joint statement began with the Bible verses in the first chapter of the Second Epistle of St Paul to the Corinthians: “Praise be to the God and Father of our Lord Jesus Christ, the Father of compassion and the God of all comfort, who comforts us in our troubles, so that we can comfort those in any trouble with the comfort we ourselves receive from God.” The statement concluded with the loving message of 2 Corinthians 13: 14, “May the grace of the Lord Jesus Christ, and the love of God, and the fellowship of the Holy Spirit be with you all”. 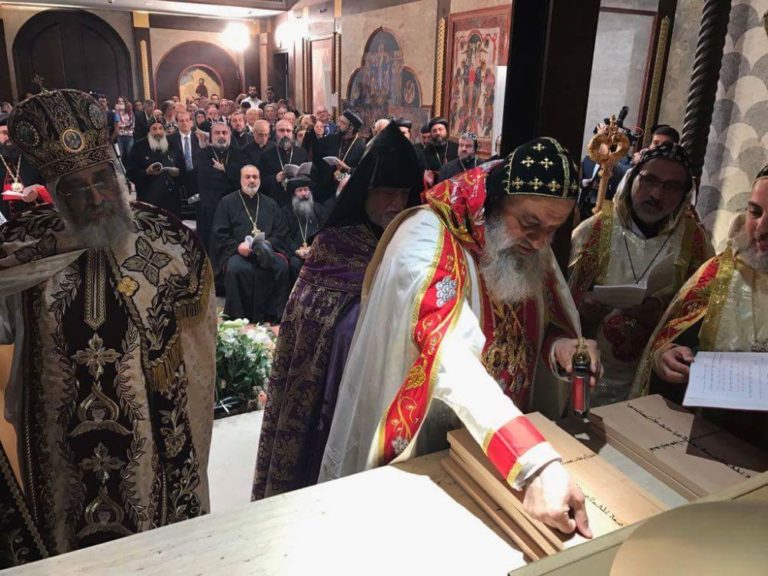 At the meeting, Pope Tawadros gave a word in which he spoke of Orthodoxy as the “conscience of Christianity in the world”, since it focuses on the faithful adherence to Bible teachings, social peace through love, and to the living testimony to the name of Christ. “We live in the Middle East where Christianity emerged and thrived, but we are now also spreading in various places in the world, and we face many challenges.

“We thank God,” the Pope said, “that our region is now seeing some calm after the turmoil of the recent years. Peace reigns in Egypt and Iraq, and Syria is a much more peaceful place.”

Pope Tawadros expressed a desire that the current meeting the prelates were holding would go beyond discussions into the realm of active testimony to Christ, through love.

The meeting concluded with an exchange of gifts among the patriarchs. 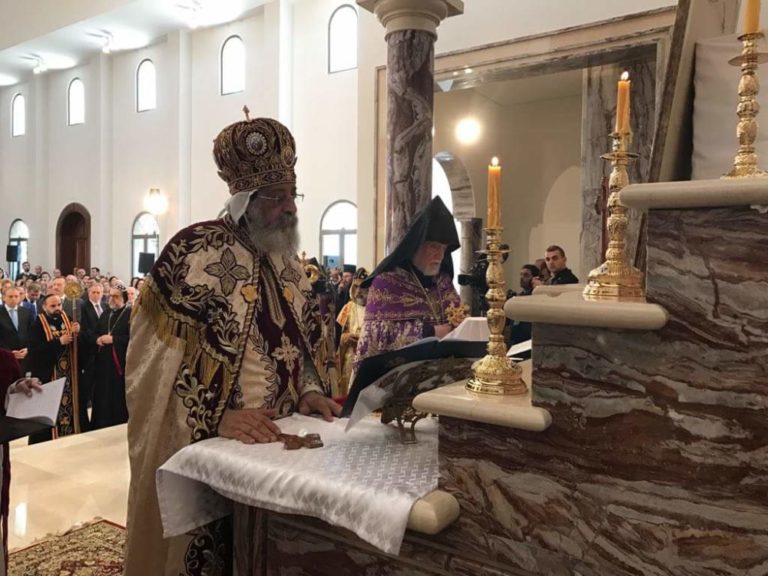 The Pope said this was a day which will be written in history with words of light, since it was the first time both the Coptic Church and the Syrian Church share the presence of St Severus who represented a strong bond between them. St Severus was Patriarch of Antioch from 512 until his death in 538. He was banished to Egypt for his adherence to the Orthodox faith in defiance of the Council of Chalcedon’s teachings. He died in Egypt and was buried there.

Pope Tawadros presented the Syrian Church the relics of St Severus, which were discovered at the 4th-century archaeological site of Abu-Mina, adjacent to the present-day monastery of Mar-Mina in the Western desert. The Pope also handed the Syrian Patriarch a certificate signed by Anba Demetrios, Bishop of Mallawi who had taken his vows at Mar-Mina’s, that testifies to the authenticity of the relics. He also handed him documents that include testimonies of apparitions of the saint to a woman named Afaf Aziz who passed away in 1996, and another testimony by Nevine Tharwat Bassili. A fourth document cites miracles performed by the saint. The documents were signed by Pope Tawadros; Anba Kyrillos, Abbot of Mar-Mina monastery; Fr Raphael Ava Mina; and Fr Sawiris Ava Mina who is responsible for the relics of St Severus at the monastery.

“I hand these documents to His Holiness Mar Ignatios Aphrem II with love and joy, and ask for his prayers and those of St Severus,” Pope Tawadros said.

On Friday 22 June, the three patriarchs joined in Mass at the church of the Holy Virgin at the Syrian Orthodox Patriarchate in Atchaneh.

An event organised was held in honour of the inauguration of the new seat of the Syrian Orthodox Patriarchate in Atchaneh. Lebanese President Michel Aon attended the event. He said that the meeting of the Oriental Orthodox patriarchs in Lebanon was an expression of holding on to the land, people, identity, and roots in the face of the attempts to evacuate the Orient from one of its vital components, and to evict Christians from their ancient homelands. 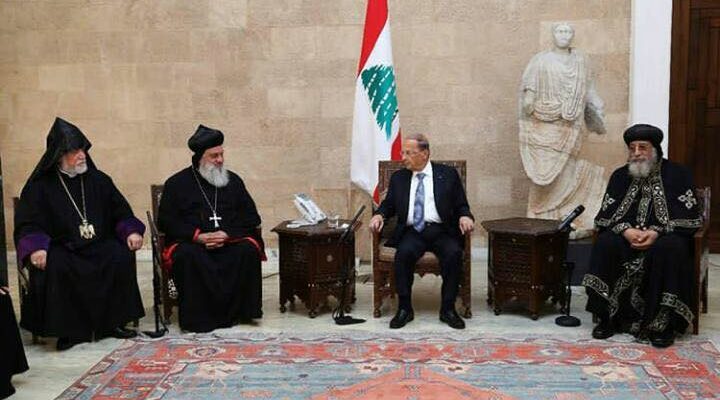 President Aon spoke of the Middle East as the land from which the early Christians preached the faith to the entire world. He talked of St Paul who set out from there, as did the disciples of Jesus Christ. “It is true,” he said, “that this land has also witnessed a lot of pain, copious bloodshed and persecution of Christians that has extended into modern times.” He talked of the massacres of the Armenians by the Turks, the modern persecution of Syrians at the hands of Daesh, and the suicide explosions in the churches of Copts during the recent years. Despite that, he said, the Church has thrived and stood strong.

The Lebanese President also spoke of the Lebanese community which includes several minorities, among which are the Syrian Orthodox, and promised that minorities would not have to give up legitimate rights.

President Aon concluded his word by addressing the patriarchs with the Bible verse quoting Jesus Christ telling St Peter: “You are the rock, and on this rock will I build my Church, and the gates of hell shall not prevail against it”. The Lord thus declared the establishment of His Church, the President said, based on the rock of faith, carrying the message of love, and resisting evil.

The Pope was received by Egypt’s ambassador to Beirut, Nazih al-Nagari, at his residence where dinner was held in honour of the Pope.

Saturday 23 June saw Pope Tawadros pay a number of visits. The first was a visit to the convent of Mar-Yacoub al-Baradie where he was welcomed by the nun assembly, said prayers there, then was guided on a tour of the convent. Together with the Syrian Patriarch, he also paid visits to the Maronite Patriarch Bechara Rai and to Catholicos Aram I. The three Orthodox patriarchs then visited the Greek Orthodox Patriarch of Antioch Yohanna X Yazigi at his headquarters. 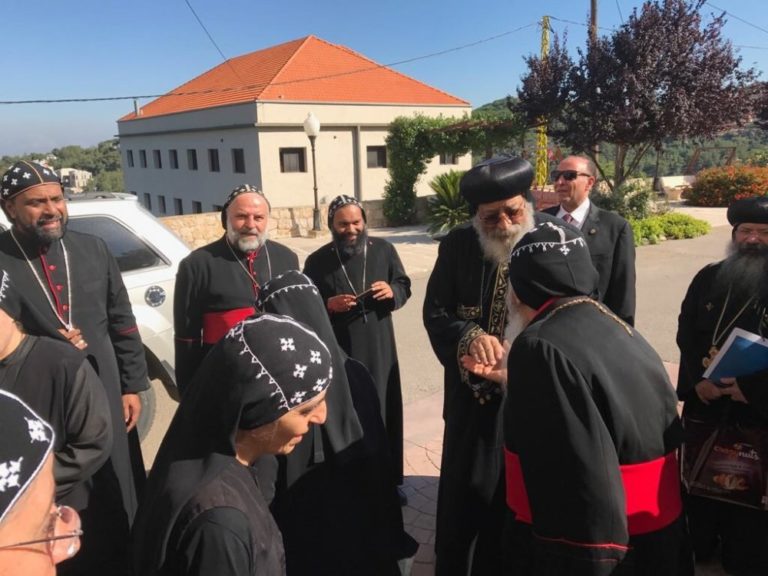 It was finally time to head home; Pope Tawadros flew to Cairo on the evening of Saturday 23 June, concluding a memorable, blessed visit. 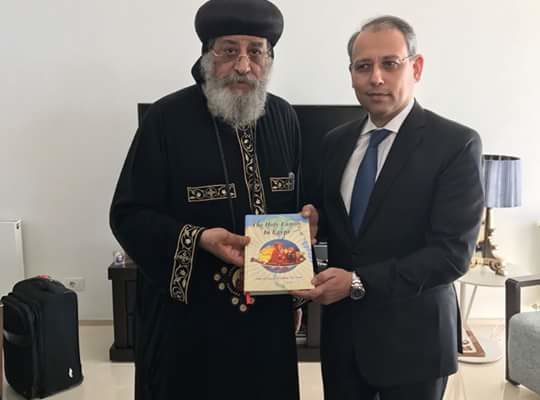