A tragic collision of two trains that occurred this morning in Tahta, Sohag, some 450km south of Cairo, has left 32 dead and 108 injured. 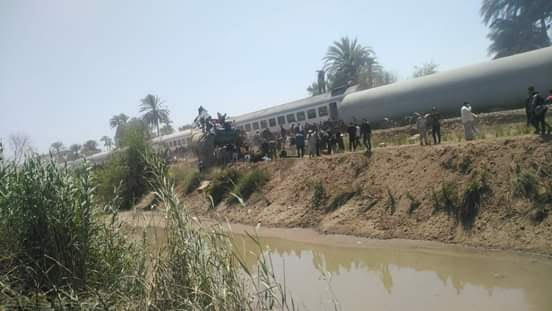 According to a statement by the Ministry of Transport, the Luxor-Alexandria Train 157 came to a sudden stop between the stations of al-Maratha and Tahta in Sohag, as a result of the activation of its emergency brake system by some unknown person/s. Meanwhile, the statement said, the Aswan-Cairo Train 2011 [which was on its way on the same line and in the same direction] had already passed the semaphore signal 709 [the one before the collision site] and was heading straight on so it collided with Train 157.

The collision caused two carriages from the Luxor-Alexandria train and the tractor of the Aswan-Cairo train to derail and flip over, leading to the casualties, the Transport Ministry statement said. In cooperation with Health Ministry ambulance teams, the injured were moved to hospitals in Sohag, Tahta, and al-Maragha.

The Ministry said a technical committee has been formed to determine the cause of the crash, and that efforts were underway to resume train traffic on the line. 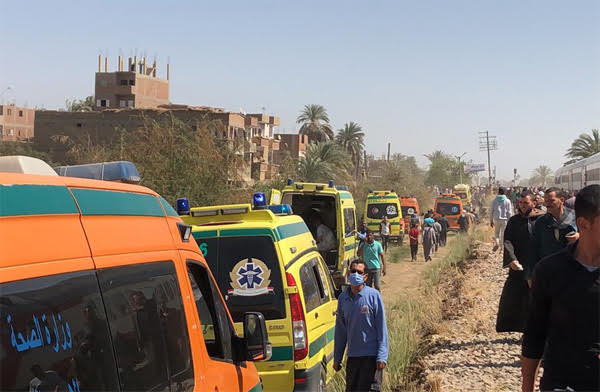 Prime Minister Mostafa Madbouly headed to the scene of the accident to visit the injured and follow up on details. Accompanying him were five cabinet ministers: the ministers of health, transport, social solidarity, local development, and scientific research.

Health Minister Hala Zayed said that 74 ambulance vehicles had moved the injured to the four main hospitals in the area neighbouring the site of the accident; and the hospitals and medical teams were put on high alert. Emergency medical teams were flown in from Cairo. Dr Zayed said there was a sufficient supply of blood in the regional blood bank in Sohag, and that more was being sent from the central blood bank in Cairo. She said that the medication and medical utilities needed for the injured were all available.

President Abdel-Fattah al-Sisi vowed “deterrent punishment” for whoever caused the deadly train collision, stressing determination to end a “pattern of such disasters”.

“Whoever caused this tragic accident, whether through negligence or corruption or other reasons, will face deterrent punishment with no exceptions, reluctance or deferment,” Sisi said in a post on his Facebook page.

The President offered his sincere condolences to the families of the victims and promised them full support and adequate compensation.

The Coptic Orthodox Church and its patriarch Pope Tawadros II issued a statement mourning the victims of the train collision, praying for consolation for their families, and for full recovery of the injured. The statement said the Church valued the efforts of the Egyptian government for progress in all its services, and was confident in its ability to avert such accidents in the future. “We will always continue to pray for God to guard Egypt and her people against any harm,” the statement concluded. 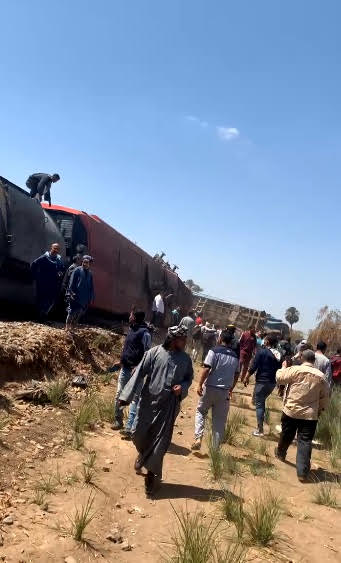