On Sunday 8 March 2020, the monk assembly of the thriving monastery of Anba Bishoy in Wadi al-Natroun in Egypt’s Western Desert [some 100km northwest Cairo] issued a statement mourning the Abbot Anba Sarapamoun who passed away during the dawn hours that day, at age 84. He had been moved to hospital four days earlier on account of deteriorating health. Anba Sarapamoun’s life on earth, the statement said, had overflowed with faithful work, spiritual guidance, prayer, love and giving. 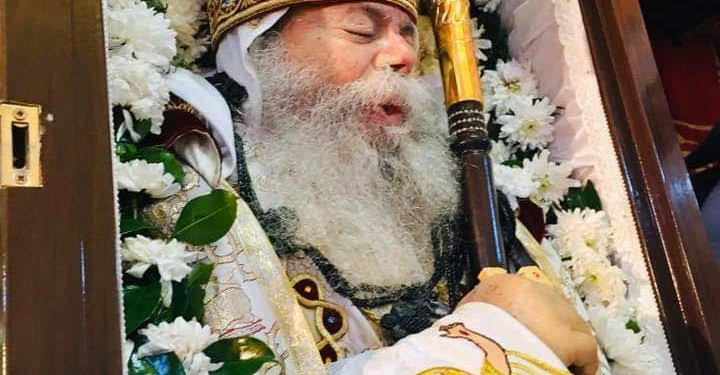 The late Abbot was born Azer Bastauros on 21 February 1937 in Upper Egypt. He took orders at al-Surian Monastery in December 1959, was ordained a priest in February 1963 and archpriest in July 1967. In June 1973, he was consecrated Bishop-General at the hands of Pope Shenouda III (patriarch in 1971 – 2012), and in May 1977 was installed Bishop and Abbot of Anba Bishoy Monastery.

Anba Sarapamoun was mourned by all who knew him. The monk Ezra Anba Bishoy described him in an obituary posted on wataninet as one of the prominent monastic fathers in modern times; an ascetic with a bright, angelic face that earned him the label: the elder full of light. He was famous for his patience, purity, and sanctity; in whatever problem he faced he always said: “God has numerous answers for every difficulty.” 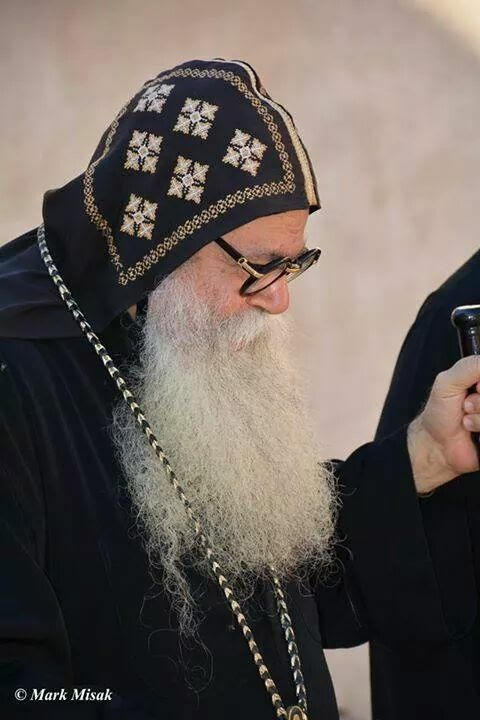 “When he became Abbot of Anba Bishoy’s in 1977”, Fr Ezra wrote, “the monastery was very primitive and housed only seven monks. Today, Anba Sarapamoun has made it one of the largest in the world. It is home to some 200 monks, and has given the Coptic Church some 40 bishops. The current patriarch, Pope Tawadros II, was one of the Anba Bishoy monks; he took orders there in 1989 under the name Br Theodore. 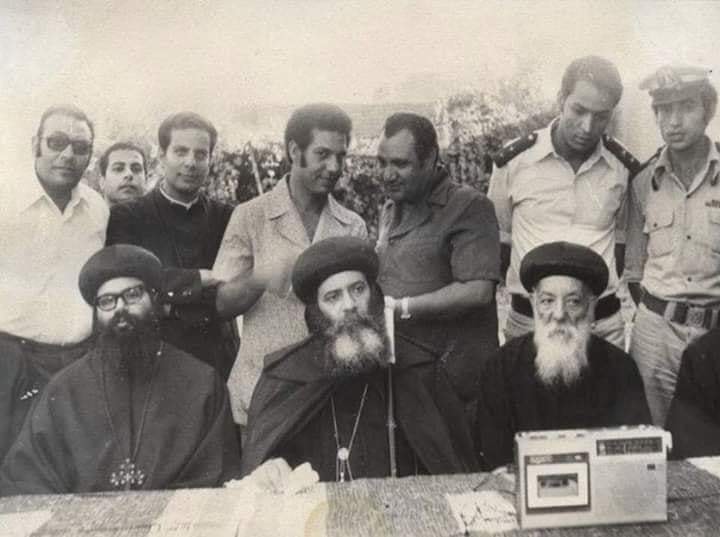 “He lived in profound faith; his heart and soul were full of God at all times. He firmly believed that ‘God’s will be done’ in his life and those of others. 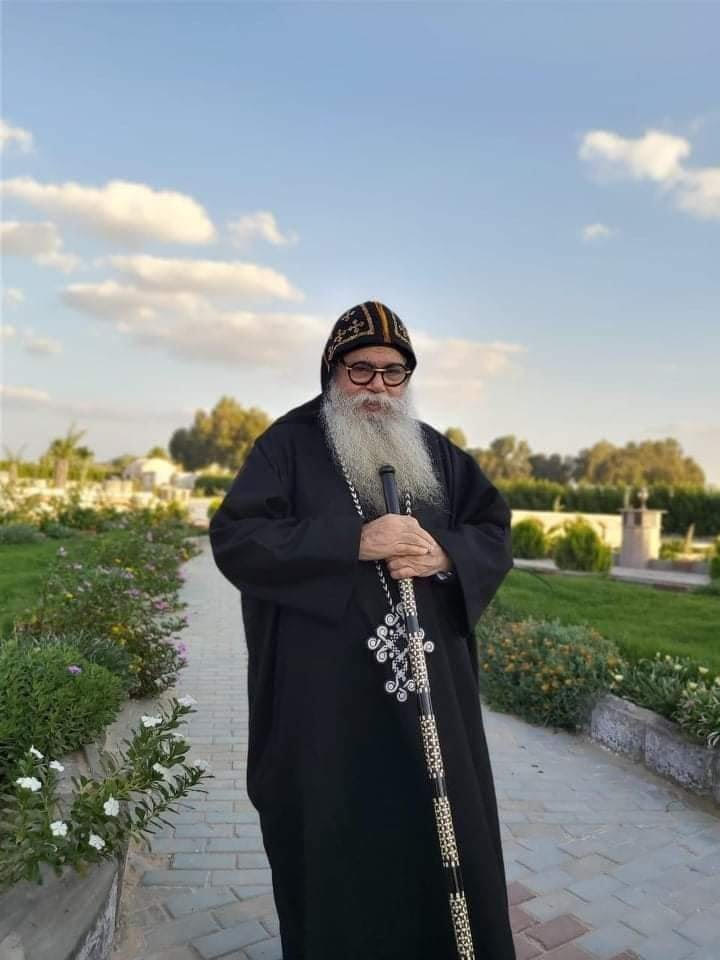 Tuesday 10 March saw funeral prayers held for Anba Sarapamoun at Anba Bishoy Monastery. Presiding over the service was Pope Tawadros who had visited the Abbot in hospital before he passed away.

The rituals started early, with Midnight and Matins praises, followed by Holy Mass at the church of Anba Bishoy at the monastery. 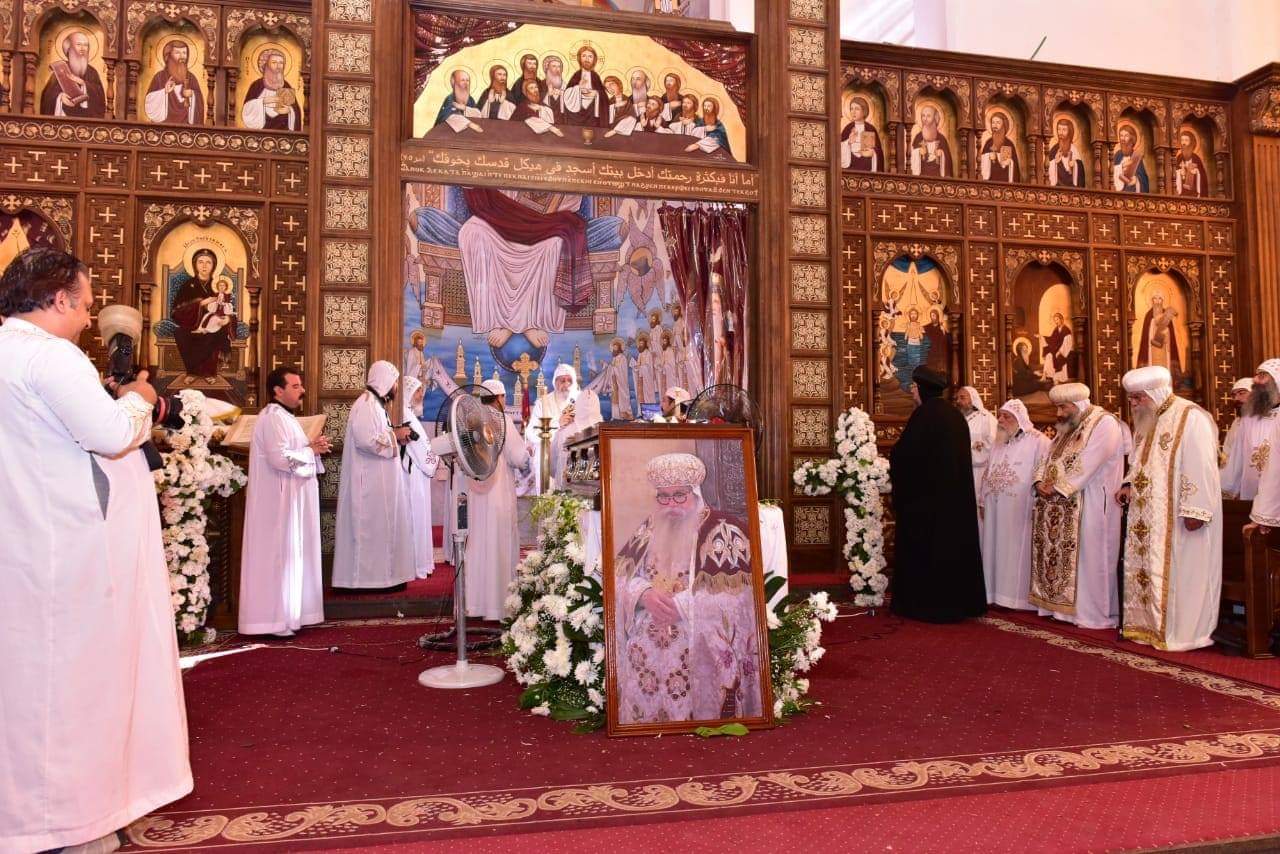 At noon, the funeral service began. A large number of Coptic metropolitans, bishops, and priests were there to pay their last respects to the late Abbot; those who could not make it sent personal representatives. The monk assembly of Anba Bishoy’s were all there. 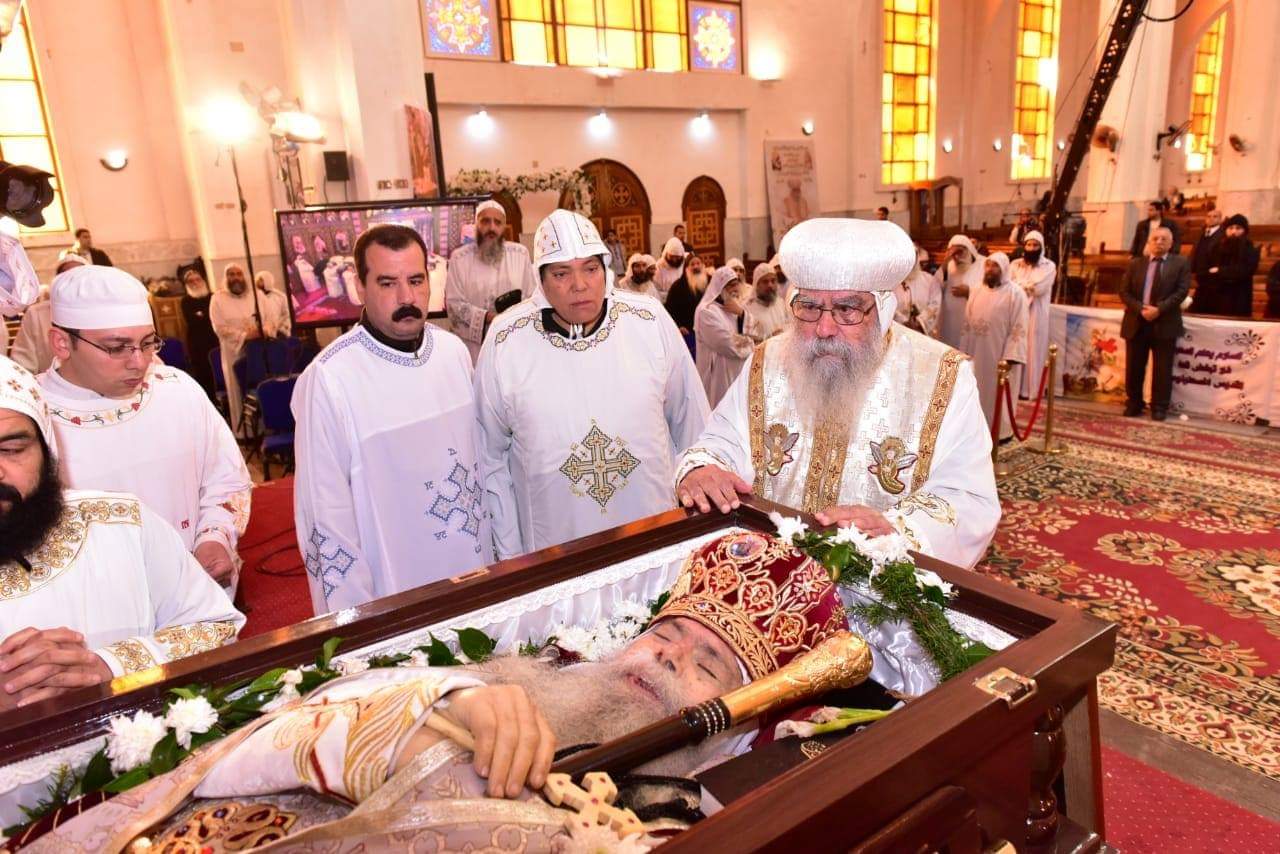 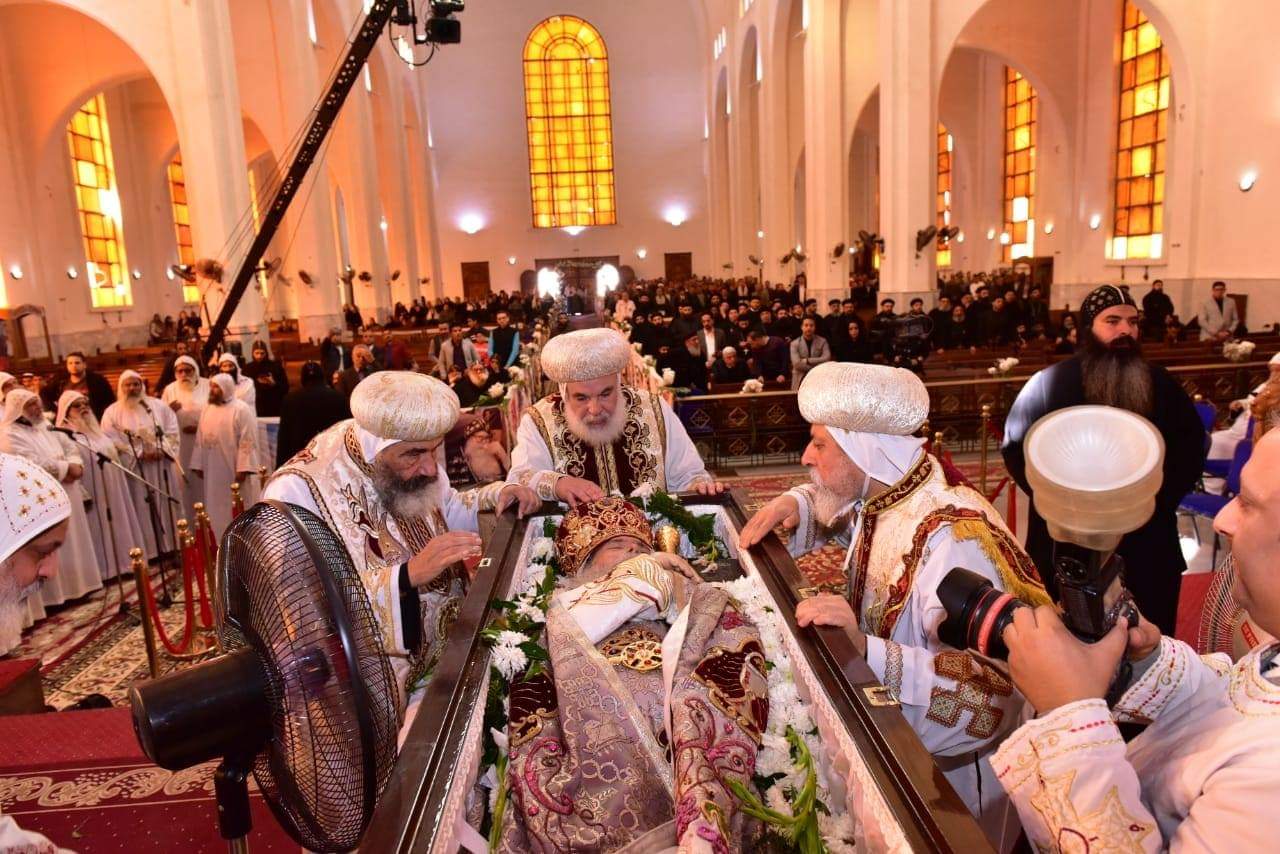 Attending was also Governor of Beheira Hisham Abdel-Ghani and senior administration and security officials in Beheira governorate, as well as high-ranking Islamic clergy in Beheira. Members of the public were not invited to attend; a previous statement by the Monastery had informed that anyone wishing to pay their last respects to Anba Sarapamoun may visit his shrine at the monastery the following day, Wednesday 11 March.

“My servant whom I chose”

Pope Tawadros gave a word which he began with the Bible verses: “Behold, My Servant whom I have chosen, My Beloved in whom My soul is well pleased! I will put my spirit upon him, and he shall shew judgment to the Gentiles. He shall not strive, nor cry; neither shall any man hear his voice in the streets. A bruised reed shall he not break, and smoking flax shall he not quench, till he send forth judgment unto victory. And in his name shall the Gentiles trust.” (Matthew 12: 18-21) 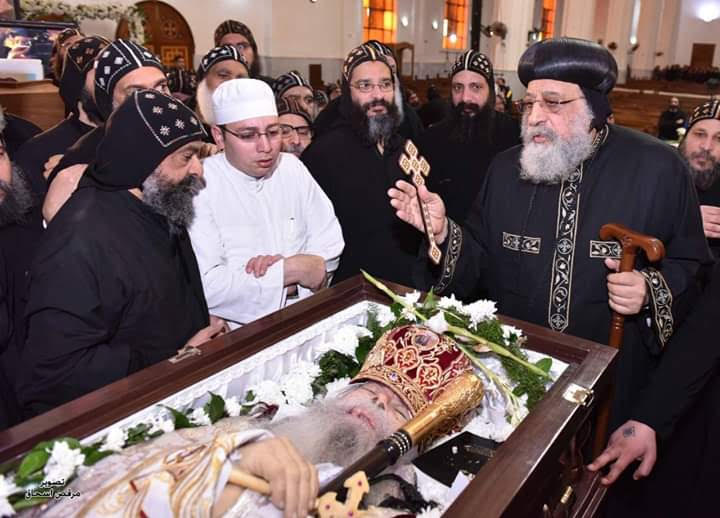 “We are all here,” the Pope said, “because we are his sons and disciples. He educated, taught, and guided us all throughout our spiritual monastic journeys.” 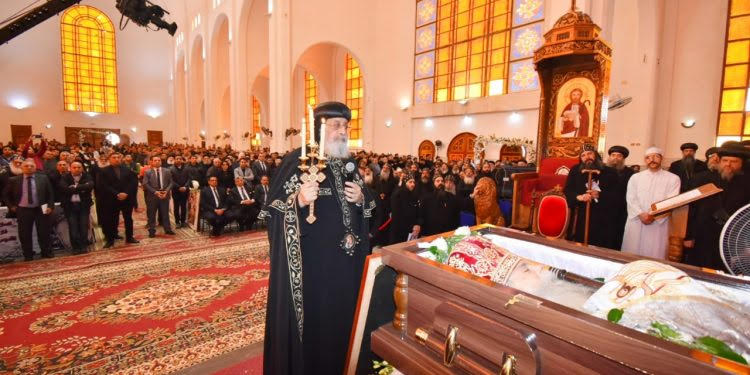 Pope Tawadros described Anba Sarapamoun as a unique man, a true monk who in our modern times lived the true, glorious monastic life of the desert fathers in Egypt in the 3rd and 4th centuries. “He bridged the span between the early Christian centuries and our present day, teaching us not through talk or instructions, but through his own life, himself being a unique role model of the perfect monk.”

The Pope said Anba Sarapamoun took orders at the age of 22 at Deir al-Surian monastery where he learned about monastic life at the hands of Fr Antonious al-Suriani, later Pope Shenouda III. 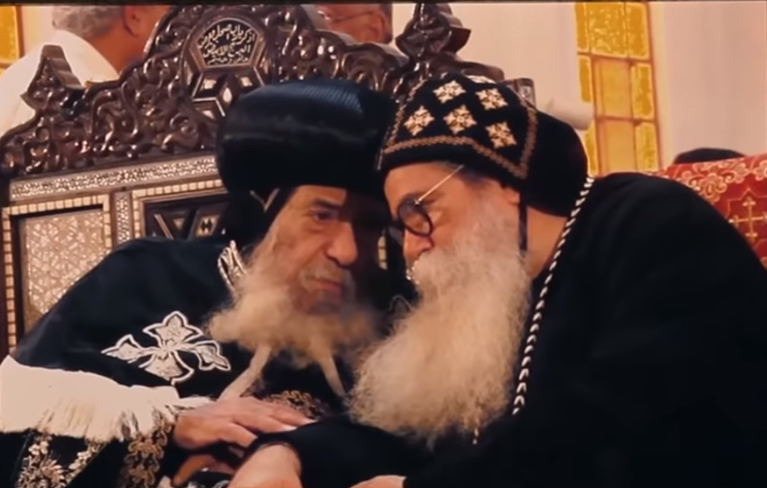 It was Pope Shenouda who later shouldered him with the responsibility of Anba Bishoy monastery which was then a very small, poor monastery. With God’s grace, and through the faithful efforts of the new Abbot, the monastery thrived into what it has become today.

Anchor of comfort and joy

Anba Sarapamoun, Pope Tawadros said, was the exemplary monk who at every moment fulfilled his vows of voluntary poverty, obedience, and chastity. He exuded gentleness and peace; and possessed the unique gift of comforting souls. 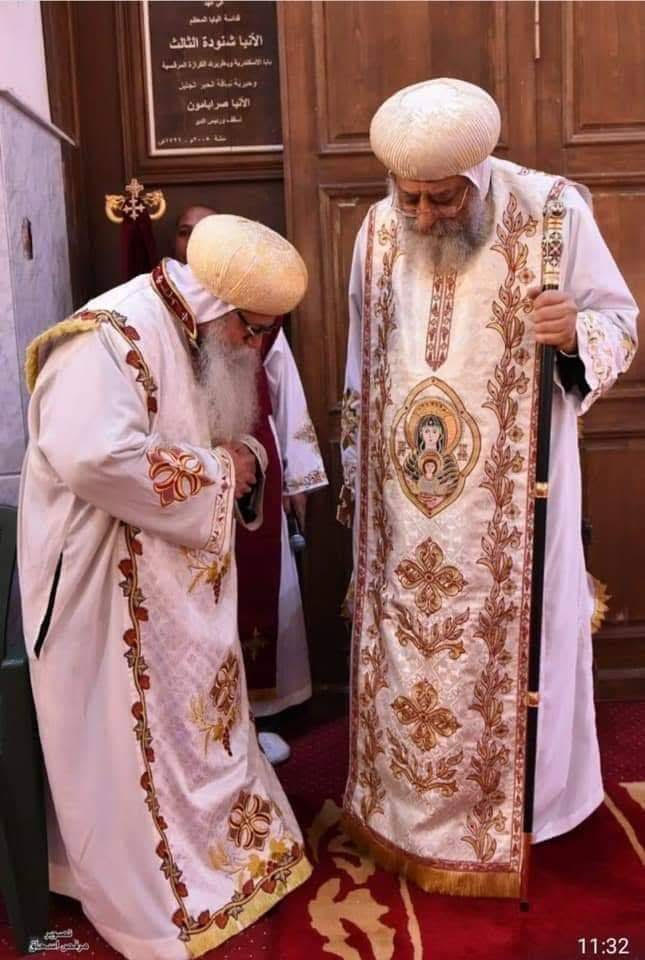 “In a world full of troubles and difficulties, Anba Sarapamoun was an unshakeable anchor of comfort, serenity and joy; others would come to him assured their souls would find solace in troubled times. Even during confessionals, no matter how heavy a burden of sin one carried, the Abbot’s words would alleviate all disquiet because they carried the power of the Spirit.”

Not only that, Pope Tawadros said, but Anba Sarapamoun was famous for the staunch encouragement he always gave his sons. He knew monastic life was a constant, life-long spiritual struggle, the Pope said, and he knew it could do with encouragement, so he generously bestowed it on all. 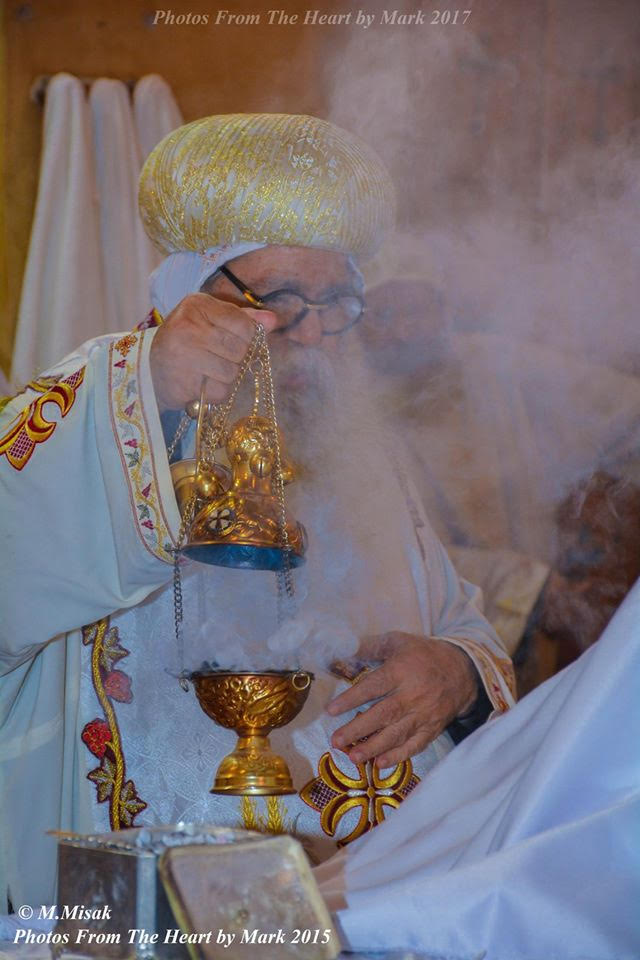 The Bible says: “The fervent prayer of a righteous man avails much.” (James 5: 16) “Anba Sarapamoun was a righteous man who loved the whole world and always prayed for it. He loved Egypt, prayed fervently for it, and saw it as ‘the best country in the world’. No matter where he travelled, upon his return home he’d say: ‘I’m back to the best country there ever was’.

“He also loved his Church and served it faithfully at all times.

“Anba Sarapamoun was no public speaker,” Pope Tawadros said, “neither was he a writer as so many prominent persons are. He never gave a speech or sermon, never wrote a book or article, but was himself, through his life of purity and godliness, the ultimate sermon and epitome of teaching.

“We bid him farewell, knowing that as we part from him now he prays for us in eternal life.” 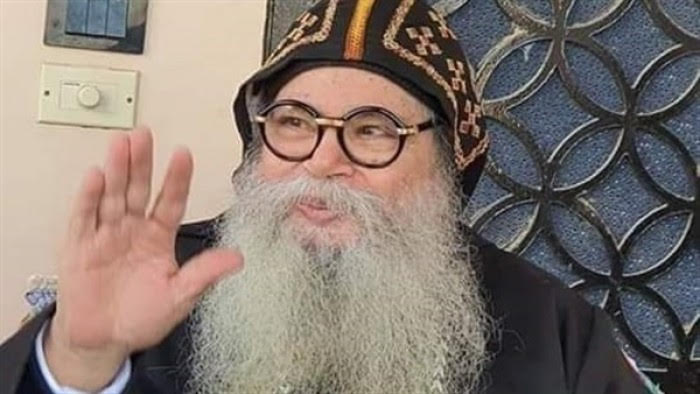 Once Pope Tawadros concluded his word, the coffin of Anba Sarapamoun, which had been kept open since he was laid in it, was finally closed. As Church tradition goes, it was carried in a procession chanting “Kyrie Eleison” around the altar then around the nave and finally, to the resting place ready to receive him, a shrine especially prepared for him according to his will, next to that of Pope Shenouda who is also buried at Anba Bishoy’s. 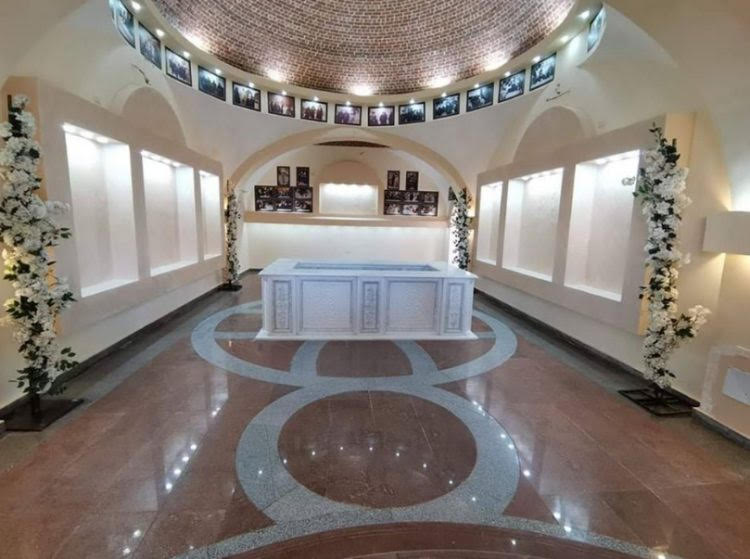 Pope Tawadros accompanied him there and said a last prayer for the soul of this blessed teacher who leaves behind no legacy of earthly value but one of immeasurable spiritual worth. 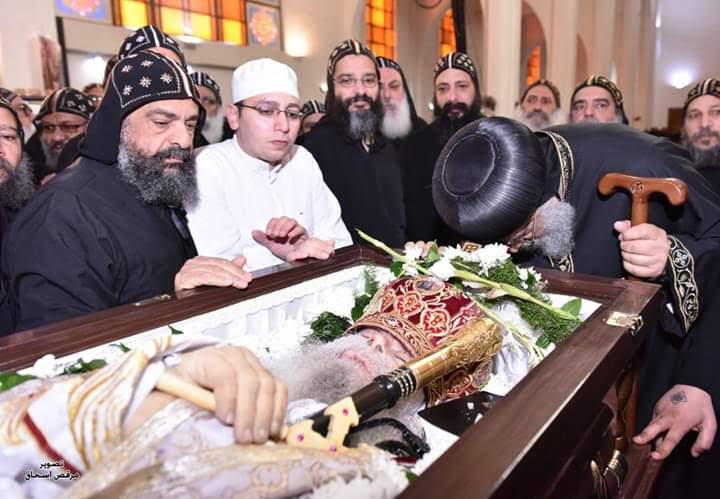 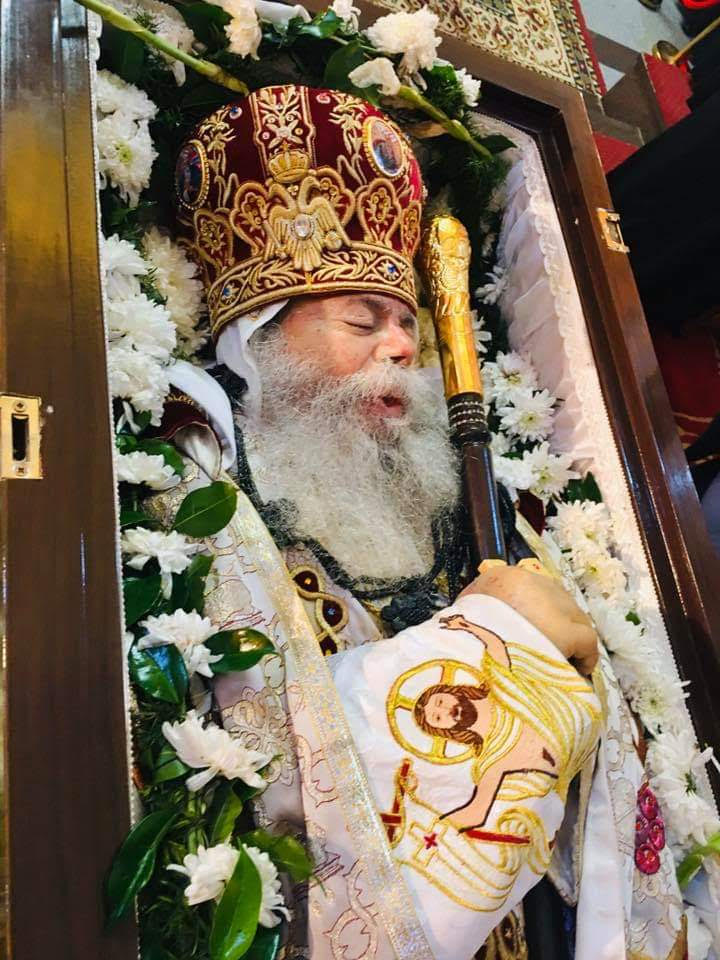