Under the motto “60 years of love and service”, the Coptic Orthodox Church celebrated the 60th anniversary of its Bishopric of Public, Ecumenical and Social Services (BLESS) on 30 September 2022.
In 1962 BLESS was established to be the developmental arm of the Coptic Orthodox Church, to offer diaconal services to the poor, underprivileged and marginalised in Egypt, no matter what their religion. On its website, BLESS cites its vision as “to form a society capable of investing its potentials, accepting diversity, respecting difference, and enjoying human dignity. Its mission is to liberate society from the slavery of poverty, ignorance, disease; to emphasise human values, enhance the Egyptian identity, and lead change through collective participation.”

Inspired leadership
A number of bishops have masterfully led BLESS since it was first established.
The first was Anba Samuel (1920 – 1981) who worked on community development, charity work, financial support, and ecumenical relations. He formed a team that worked together in harmony.

Anba Athanasius (1923 – 1984), Metropolitan of Beni Sweif succeeded him, working closely with Anba Yu’annis (1923 – 1987), Metropolitan of Gharbiya; and Anba Pachomius; Metropolitan of Beheira. They carried on with the projects initiated by Anba Samuel in the same spirit and thought, organising them in multi-aspect three-year programmes. Anba Athanasius coordinated between BLESS and the Middle East Council of Churches to establish a comprehensive development programme that included leadership training, vocational training, healthcare, women and children, rural development, small loans, emergency programme, charity, and better life programme.
In June 1985 Anba Serapion, current Metropolitan of Los Angeles became Bishop of BLESS which had so expanded that a new building was needed to house its offices; it had previously been housed in a wing in the papal offices. Anba Serapion established a new fully equipped building for BLESS, which was opened by Pope Shenouda III in October 1992.
Anba Yu’annis, current Bishop of Assiut succeeded Anba Serapion in 1996. He greatly diversified and expanded the ministry of BLESS, with the Poor Villages Comprehensive and Integrated Development serving some 75 villages through six programmes. He also implemented slum area services, reproductive health programmes, and programmes for persons with disabilities. 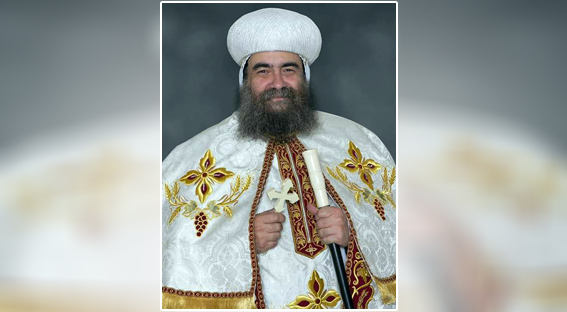 Once Anba Yu’annis was consecrated Bishop of Assiut in 2015, Pope Tawadros assigned the responsibility of BLESS to Anba Yulius, its current bishop. Anba Yulius began by reformulating the vision and mission of BLESS, to include participation of national and international partners, consultants, and governmental and non-governmental officials.
The mission of BLESS expanded to awaken awareness to accept diversity, battle poverty, and empower the marginalised and vulnerable.
BLESS was also restructured internally, and new programmes were created.

Triumph in Christ
The 60th anniversary celebrations started with Mass of thanksgiving on the morning of 29 September, officiated by Pope Tawadros and a great number of bishops including Anba Yulius, Bishop of Old Cairo Churches and Bishop of BLESS. 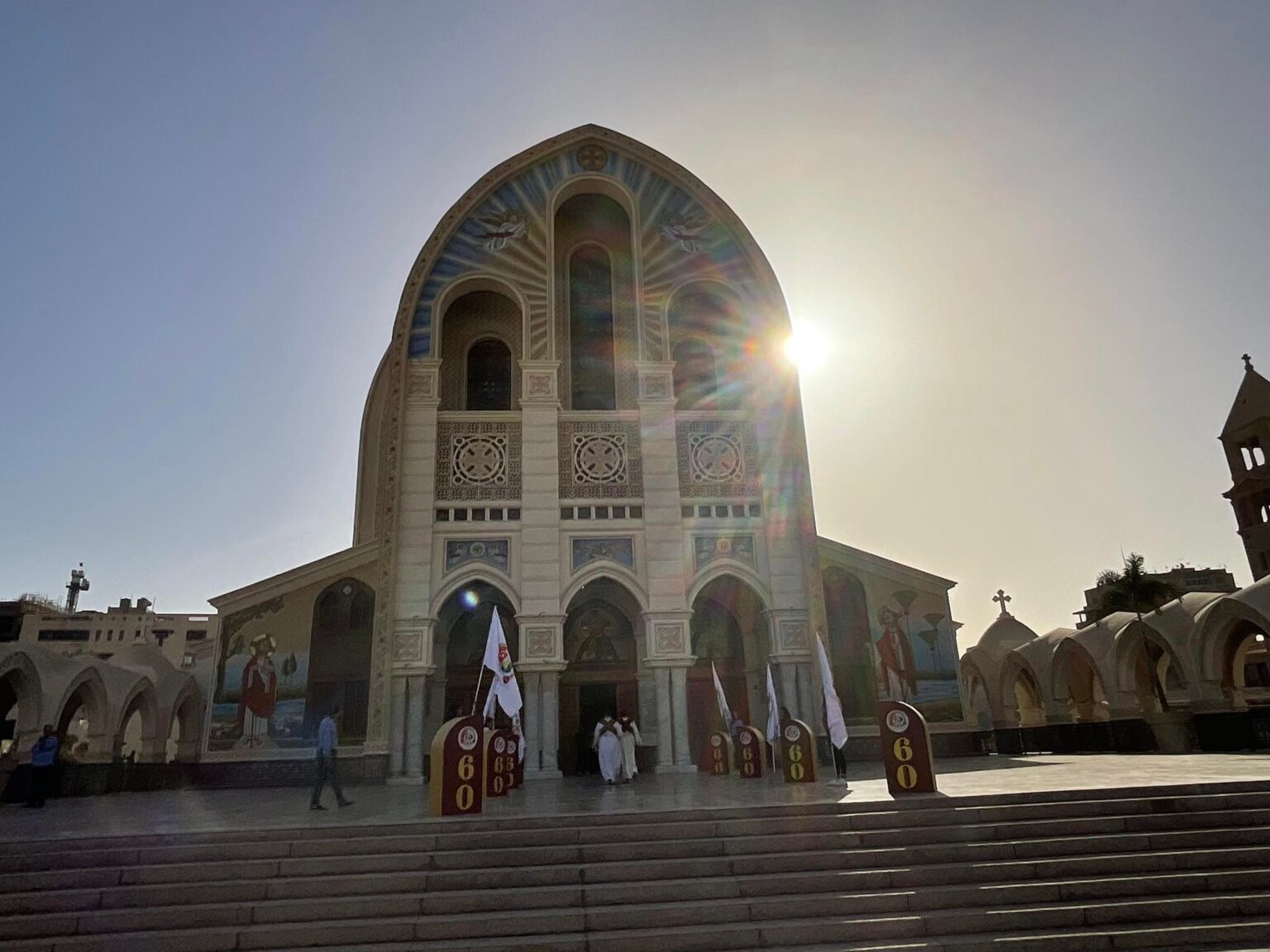 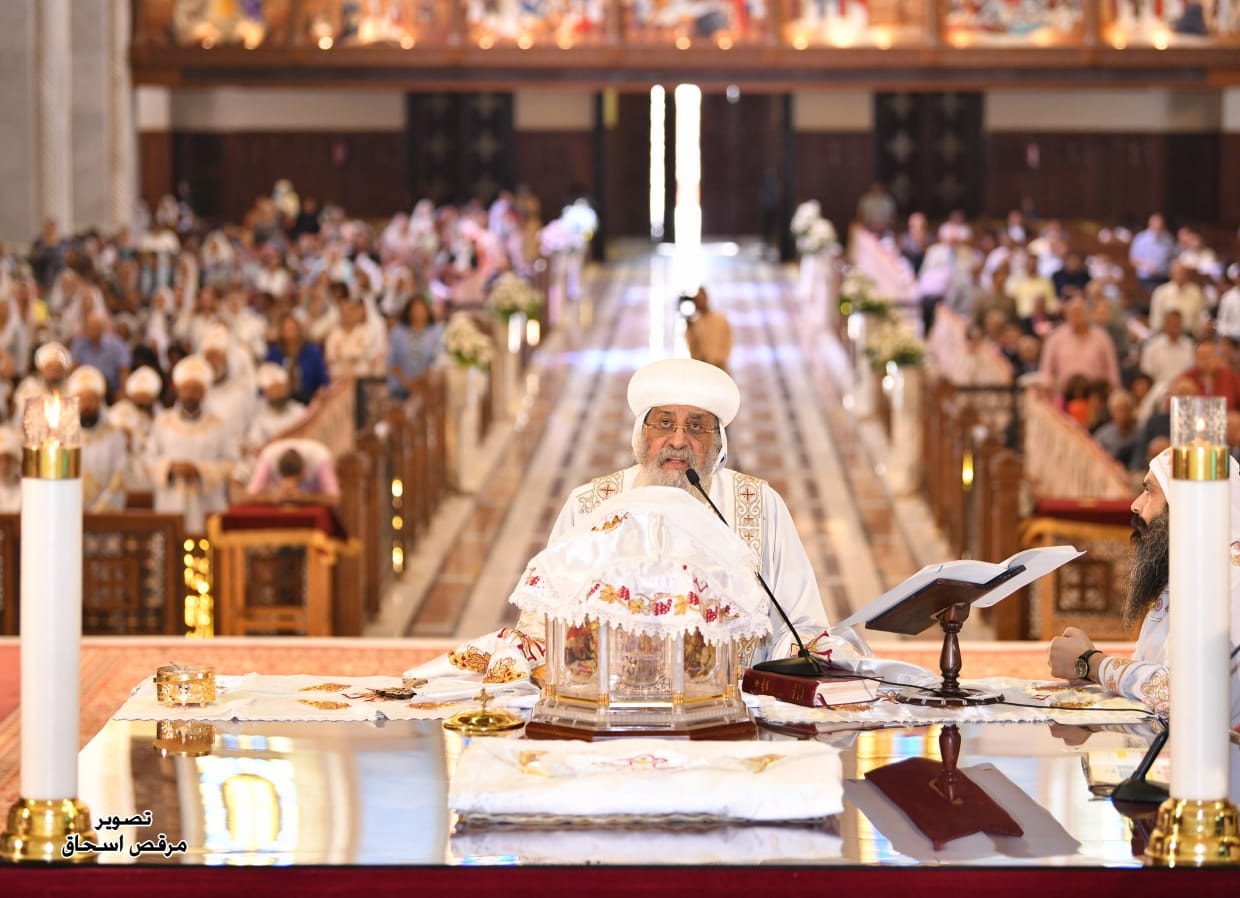 The Pope’s sermon focused on the Bible verse: “…Thanks be unto God, who always leads us to triumph in Christ”. He applied these words to BLESS and its founder Bishop Samuel (1920 – 1981) who worked lovingly and diligently to plant the seed of what has become an abundantly fruitful BLESS.

Following Mass, the Pope honoured the bishops who had worked with BLESS inside and outside Egypt, those who passed away and those still living. The honourees included the founder Bishop Samuel; Metropolitan Athanasius; Metropolitan Pachomius; Metropolitan Serapion; Bishop Moussa of Youth; Bishop Danial of Maadi; Bishop Youssef of Southern US; Bishop Yu’annis of Assiut; Bishop Damian of Northern Germany; Bishop Maximos of Madinet as-Salam; Bishop Angaelos of London; Bishop David of New York; Bishop Yulius of Old Cairo and BLESS; Bishop Arseny of The Netherlands; Bishop-General Abraham of LA; and Bishop Mikhail of Qubba. 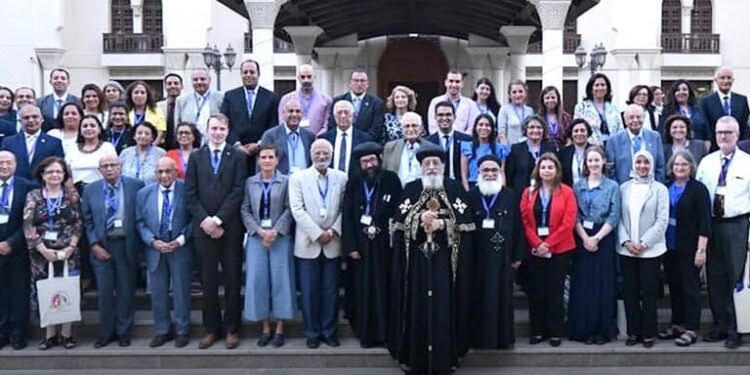 The day before, Pope Tawadros had met Anba Yulius, BLESS programme directors, and BLESS development partners, thanking them all for their faithful efforts for the ministry. The partners had already paid visits to slum areas and rural sites served by BLESS, to witness first-hand the fruit of the development work. 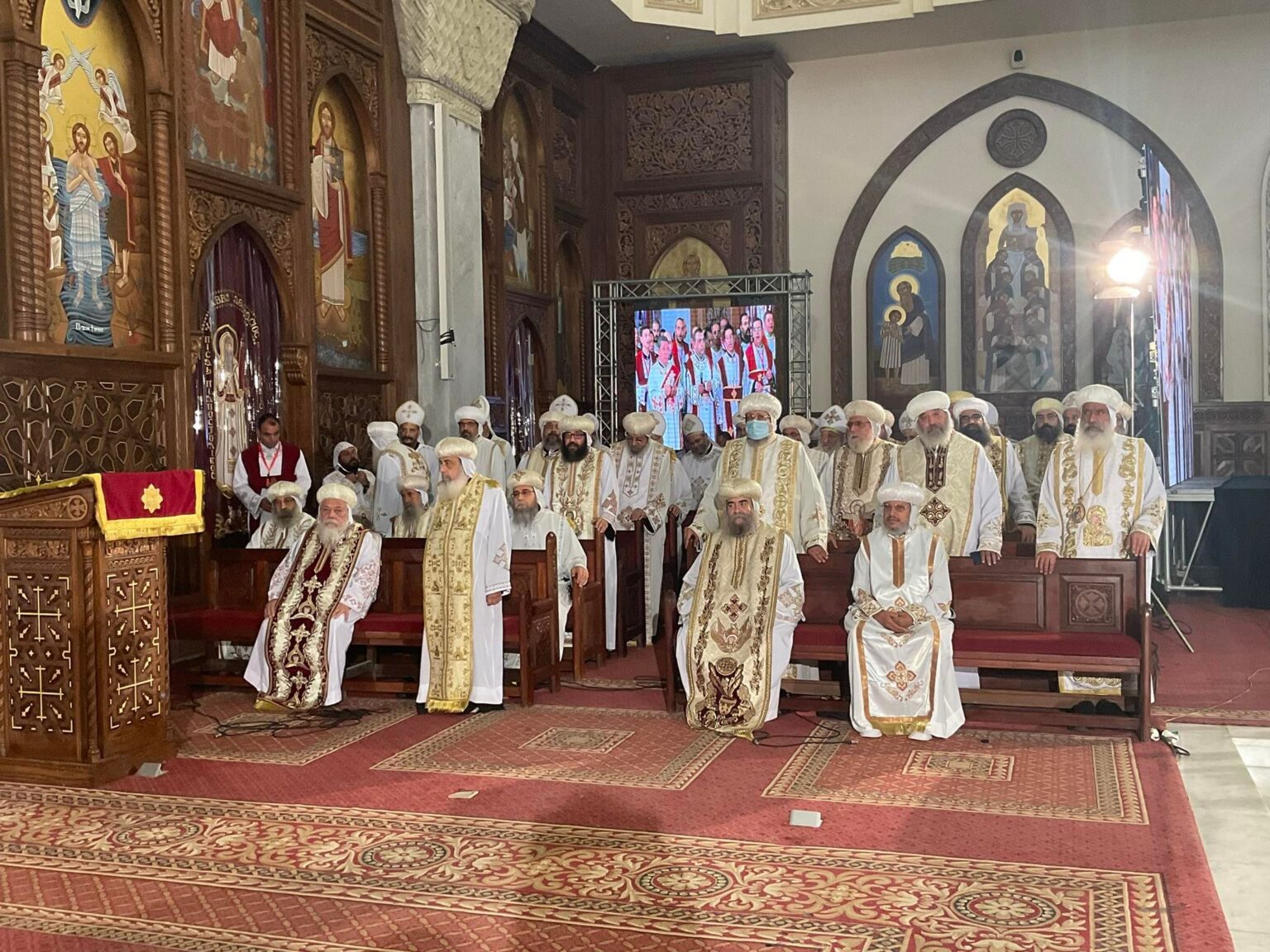 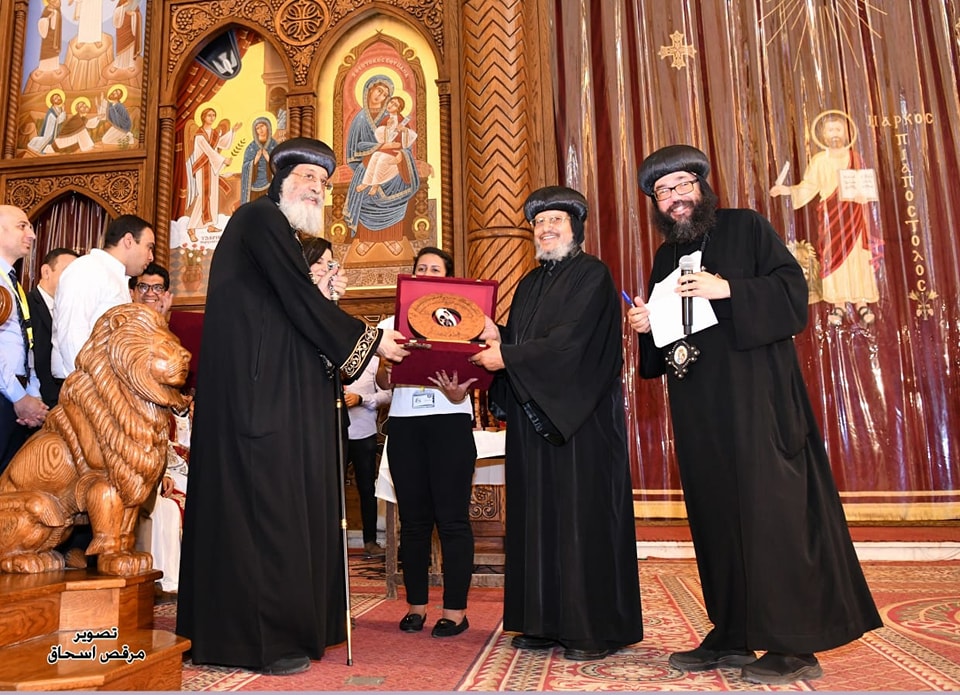 Time-honoured prayers for Egypt
The evening of Friday 30 September witnessed a grand celebration at the theatre of Anba Rweiss in the grounds of St Mark’s Cathedral in Abbassiya, Cairo, in honour of 60 years on BLESS. 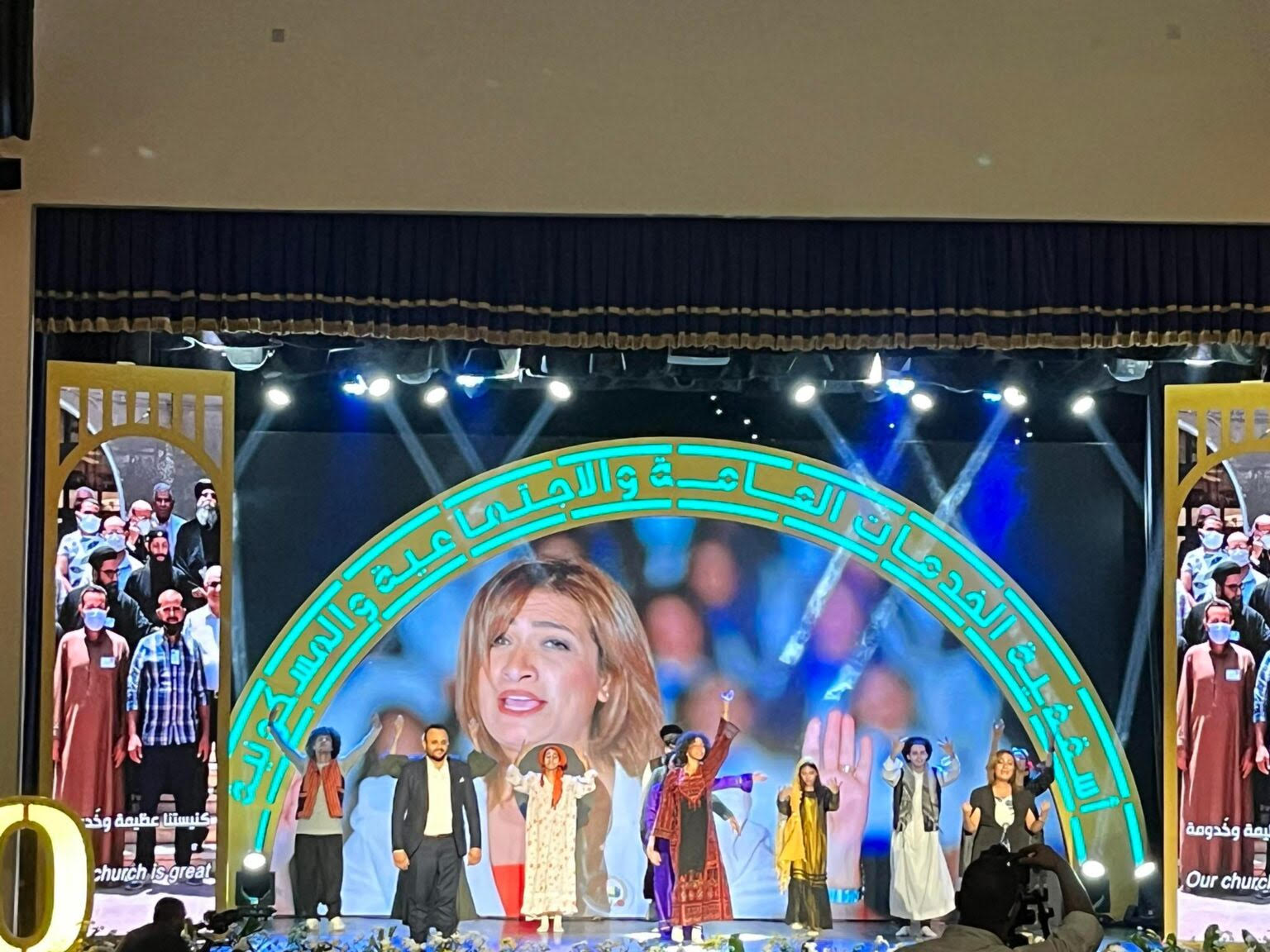 The celebration was attended by Pope Tawadros and Anba Yulius. The Holy Synod was represented by 25 bishops; also present were members of the clergy from all over Egypt, and BLESS development partners and staff.
On the official level, there were Minister of Social Solidarity Nivine El Kabbag; Minister of Local Development Hisham Amna; and Minister of Emigration and Egyptian Expatriates Soha Gendy. A number of Parliament members, al-Azhar representatives, former ministers and public figures were also in attendance. 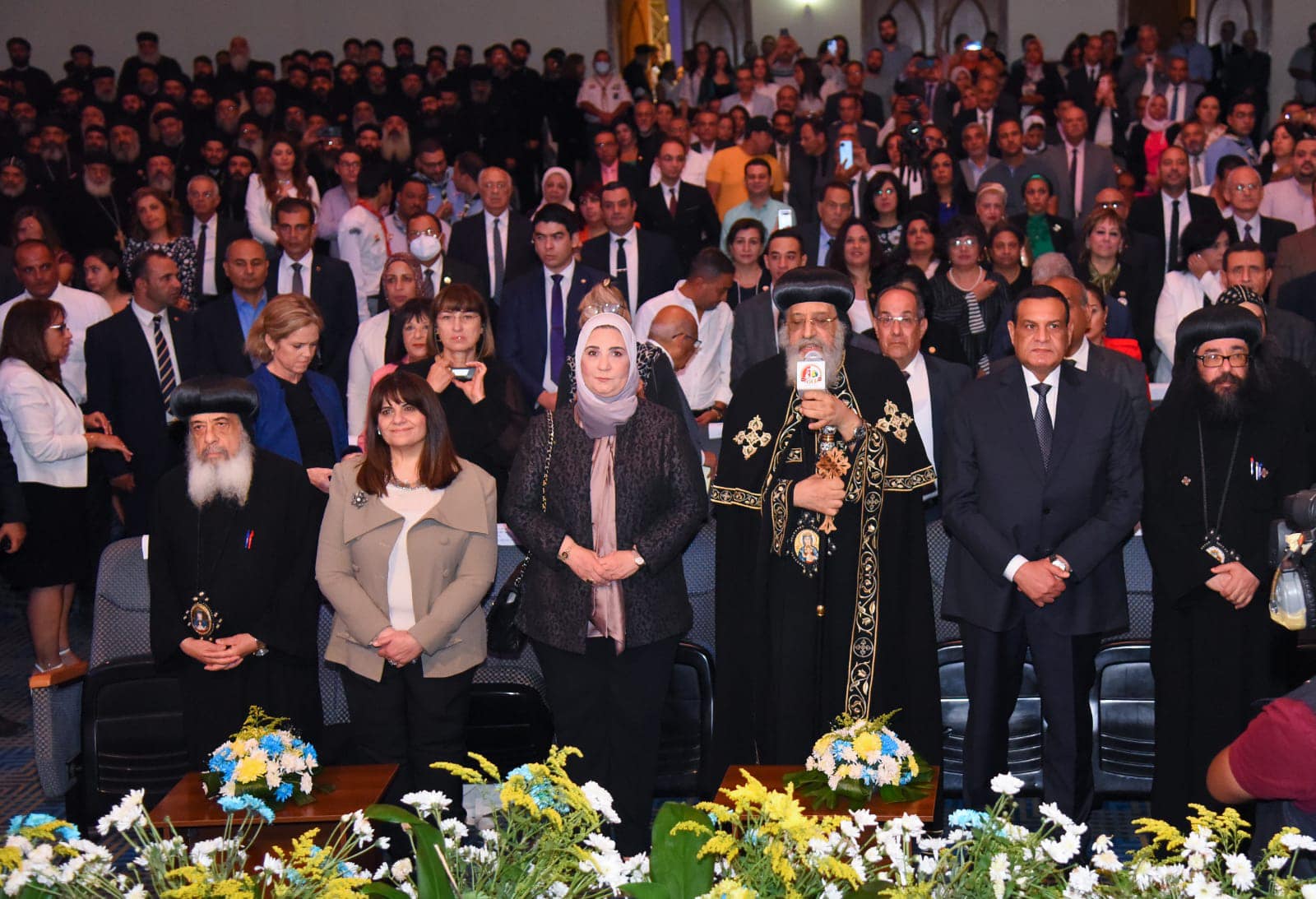 The event was interspersed with the time-honoured litanies the Church has been regularly praying for some two millennia, asking the Lord to bless Egypt and her people, her head of State, Nile, crops, and peasants; also for the needy, the sick, the grieved, widows and orphans, persons away from home, seekers of jobs, and those who donate offerings.

Real change
Presentations and briefs were given on the programmes implemented by BLESS in 523 communities in Egypt’s villages, hamlets and slums, with special stress on success stories and the features that distinguish BLESS’s services. These are accessible to all Egyptians regardless of religion or gender. They cover a wide, diverse selection of development work, including education, health, women empowerment, developing skills, supporting small enterprises, and preserving the environment. Furthermore, it was explained that BLESS supports Egypt’s society during emergency or hardship such as fires or torrential rains. 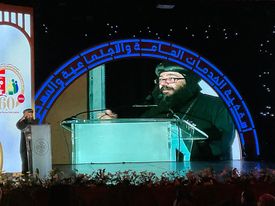 The roles played by BLESS local and international partners was also highlighted. Representatives of the development partners said their financial support for BLESS’s development work was not the sole aim; they aspired to work real change in Egyptian culture and education.

Protocols
Protocols of cooperation between BLESS and governmental institutions and presidential initiatives came into focus as Anba Yulius elaborated about them. He cited a protocol with the Adult Education Authority and the Supreme Council of Universities to reduce illiteracy, enhance educational standards, and help school dropouts to go back to school; and others with the Ministry of Manpower to promote occupational safety and health, and to spread a culture of entrepreneurship. Other protocols were signed with the Ministry of Expatriate Egyptian Affairs to collaborate on the Haya Karima (Decent Life) Initiative, a national mega project which works holistic development in Egypt’s villages; the Ministry of Environment to preserve the environment, confront climate change, and conserve water; the National Council for Childhood and Motherhood to collaborate on the initiative “She Can” to empower women; the Rotary Clubs in Egypt to set up adult literacy classes; the Old Warriors Association to provide prosthetics; and others. 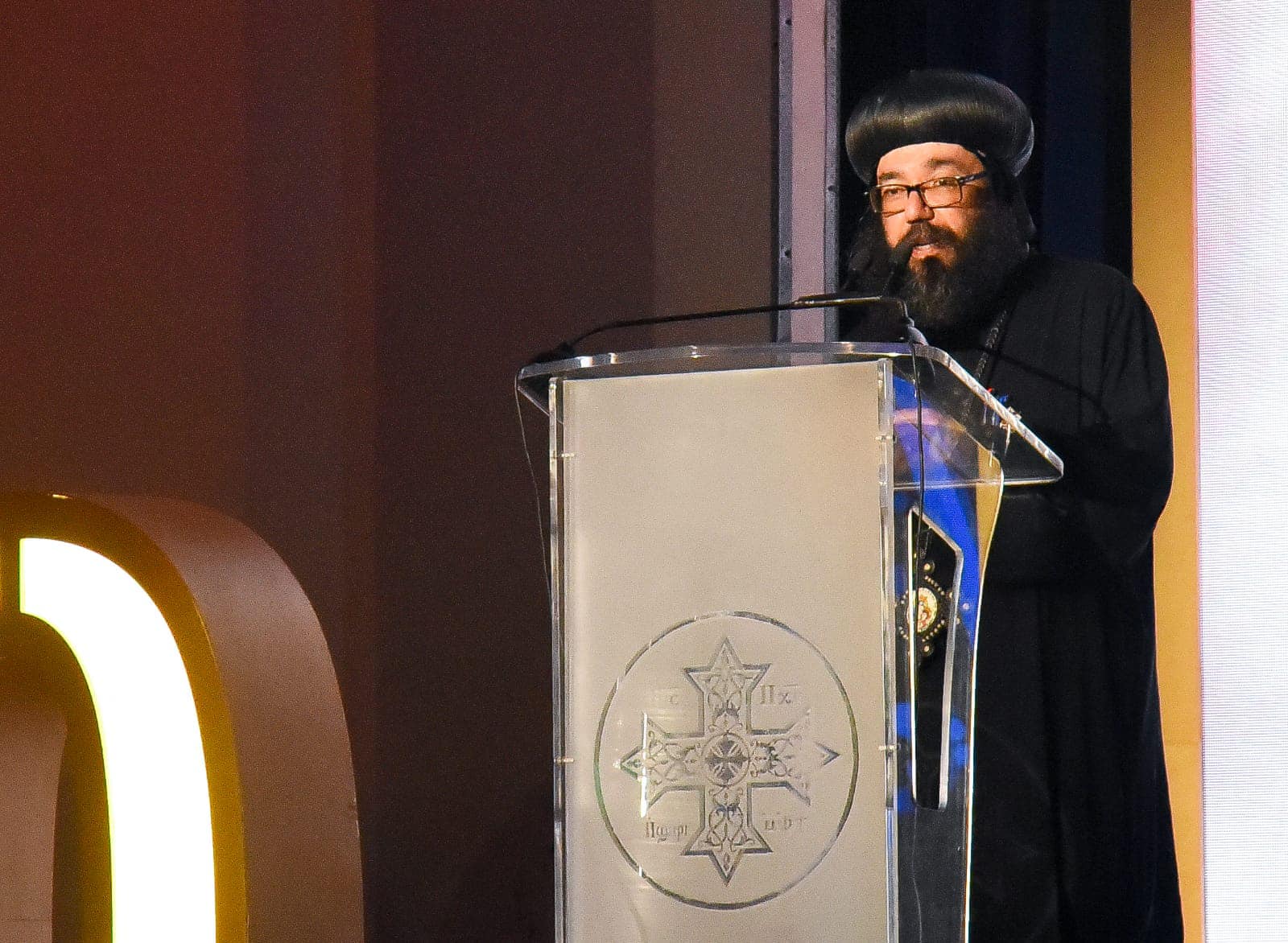 Anba Yulius also talked of the development and enlightenment documents launched by the government together with the Egyptian Church and local or international institutions.
The outcome of such close cooperation, Anba Yulius said, is that BLESS is now seen as a significant development partner and player on the national arena. The proportion of its non-Coptic beneficiaries has risen to some 20 per cent of the total; relations with Muslim clergy and the Ministry of Islamic Endowments are exemplary; and the role of the Coptic Society for Social Services has been activated as a civil arm of the Church and has partnered with the European Union and other international entities in development projects.

Ministry of washing feet
The celebration featured the moving story of how the first Bishop of the Bishopric of Services, Anba Samuel was able during the hard years of Egypt’s War of Attrition with Israel (1967 -1973) to collect some EGP500,000 worth of medicine donated from outside Egypt to hand them to the War Effort. 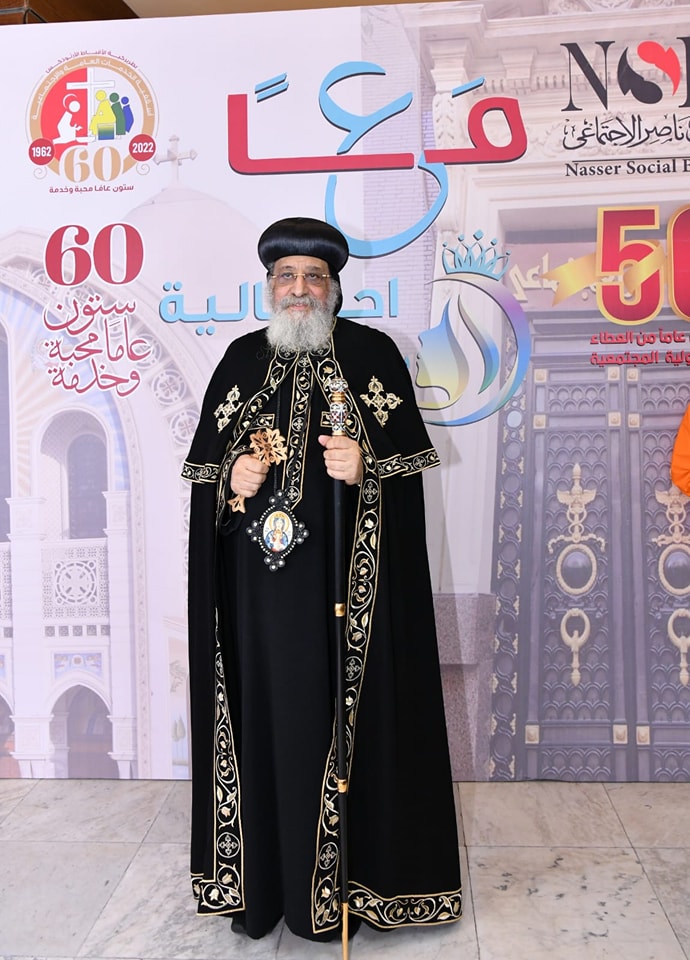 Anba Yulius talked of the special care and interest Pope Tawadros grants BLESS, given that he believes the ministry provides a special healing touch to the needy and distressed. The Bishop said that love is Christ’s commandment to the Church; “Love is the foundation of the ministry,” he said, “which is summed up by the washing of feet as Christ did. BLESS washes feet from ignorance, disease, and poverty, so that a person can ‘get up and walk’ and be empowered.”

Bringing joy
The event concluded with Pope Tawadros’s word. The Pope started by welcoming all his guests, reminding them that “we are commemorating the day in 1962 when Pope Kyrillos VI (patriarch in 1959 – 1971) consecrated Anba Samuel as Bishop of Public, Ecumenical, and Social Services.” 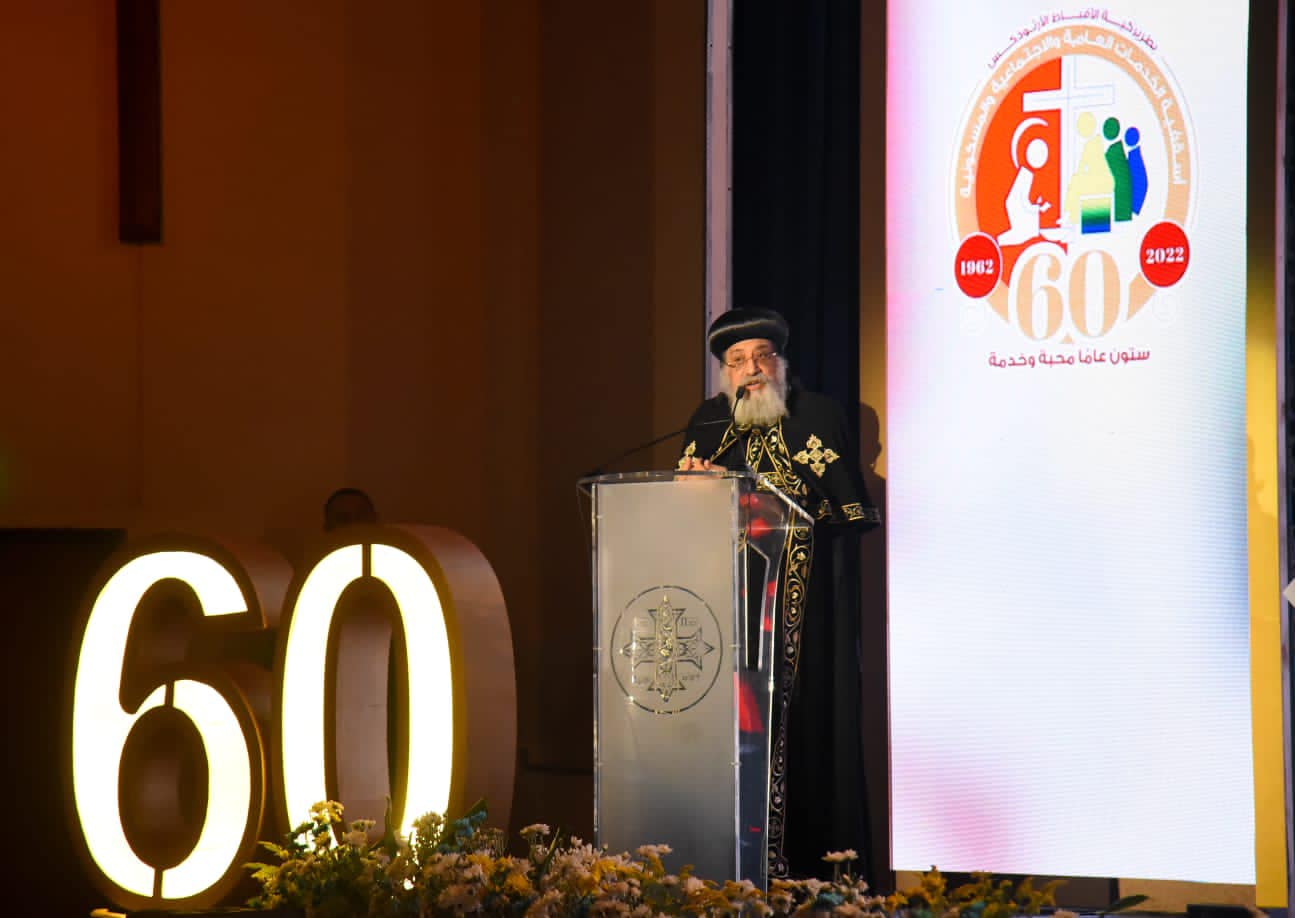 The Pope talked about Anba Samuel, saying that he used to work quietly, devotedly and diligently with a small group of people to nurture the nascent BLESS. The ministry spread, the Pope said, as a seed that sprouts, grows, and bears fruit. Four other bishops succeeded Anba Samuel, following his footsteps in spirit and devotion.
The Pope meditated on the verse “Comfort the fainthearted, uphold the weak” (1 Thess 5:14). He said that when in trouble, a person is counted among the fainthearted who need comfort and encouragement. As Church servants and ministers, we must strive to make souls whole. We urge the small to grow and the tired to rest.
“How wonderful to serve others!” the Pope exclaimed. When you serve the other, he said, you bring to yourself peace and comfort. “Service is not about posts; service is to bring joy to a person’s heart and support in hard times; to lead to a decent, dignified life,” the Pope said, in a nod to the presidential developmental initiative Haya Karima (Decent Life) with which the Church collaborates. 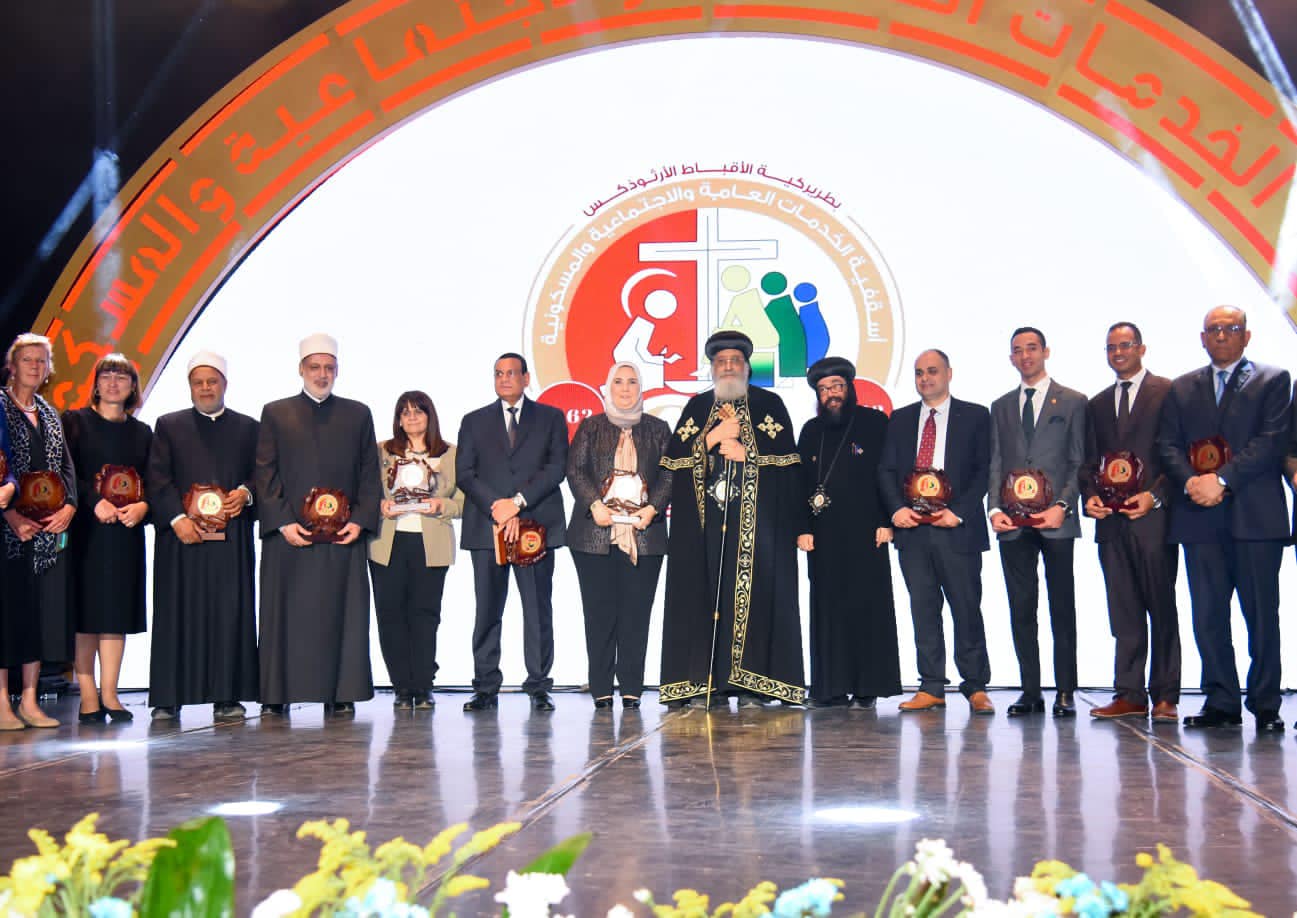 The Pope thanked all the public figures who attended, the ministers, members of the Holy Synod or representatives of NGOs, pointing out that this is the best encouragement to and appreciation of BLESS. “The more intertwined the members of society, the more solid society becomes,” the Pope concluded.
The evening closed with Pope Tawadros honouring all who have worked to make BLESS a success story.