Photographs and video footage of the 10 May funeral of 37-year-old Wael Saad Tawadros, who was executed on 9 May 2021, went viral on social media. 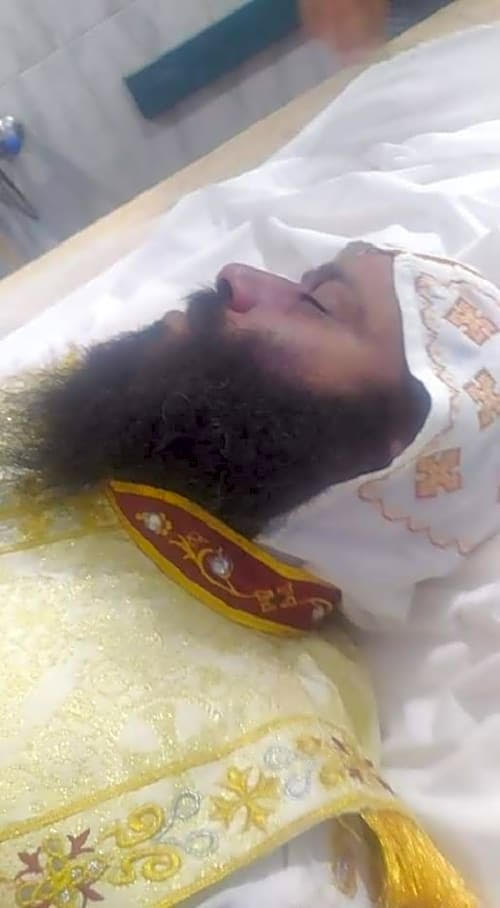 Mr Tawadros had been a monk named Ishaia al-Maqari at St Macarius Monastery in Wadi al-Natroun in Egypt’s Western Desert, but was defrocked on 5 August 2018 for “gross violations of monastic law” and ordered to revert to his lay name. He was convicted of the 29 July 2018 murder of Anba Epiphanius (1954 – 2018), Abbot of St Macarius’s; at the time Mr Tawadros had not yet been defrocked but was still at the monastery. His defrocking a few days later came as the murder crime was being investigated by the prosecution but, according to a Church statement, had nothing to do with it; another St Macarius monk, Falta’ous al-Maqari, 36, was found to have been an accomplice in the crime, but was never defrocked.

In February 2019, Damanhour Criminal Court handed Mr Tawadros and the monk Falta’ous al-Maqari, death sentences. This shook a large segment of the Coptic community, who insisted that no monk could ever commit such a crime, and persisted in circulating unsubstantiated stories about their innocence of the charge, even questioning the damning evidence put before the court. 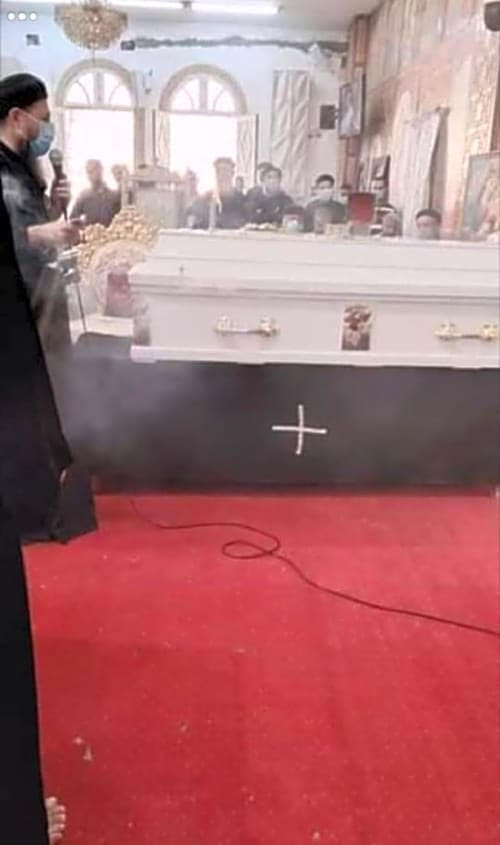 The rulings were legally contested according to standard procedures and, on 1 July 2020, the Court of Cassation, the highest court in Egypt, approved Mr Tawadros’s death sentence, but sentenced Fr Falta’ous to life in prison.

On 9 May 2021, Mr Tawadros was executed by hanging. Fr Dawoud Girgis was present and took his last confession. His family obtained permission to take the body for burial in his southern hometown of Abu-Tij in Assiut, some 420km south of Cairo. They dressed him in clerical vestments, placed a wooden cross in his hands, and placed him in an open coffin as is the custom with priest funerals. They held a funeral service and buried him.

Photos and video footage of the funeral, with Mr Tawadros in his open coffin, went viral on social media and caused a furor among Copts. Many again insisted he was innocent of the murder charge, as some footage attempted to imply. Others questioned what right he had to be buried as a priest when he had been defrocked, while many others speculated that this had been on orders of Pope Tawadros or Anba Pachomius, Metropolitan of Beheira, as a sort of implicit pardon. [St Macarius Monastery is located in the west Delta governorate of Beheira, the capital city of which is Damanhour; Mr Tawadros was tried before a Damanhour court and executed at Damanhour prison.]

On 12 May 2021, the Coptic Orthodox Bishopric of Beheira issued a statement to shed light on the facts relating to Mr Tawadros’s execution and burial.

The statement explained that prior to his execution, Mr Tawadros had been detained in Damanhour Public Prison where the prisoners are regularly offered spiritual service by a Beheira priest, the prison preacher.

[Given the special nature of the offence committed by Mr Tawadros, he was offered special care by the Church]. In August 2020, Pope Tawadros II delegated Anba Domadios, Bishop of 6 October and the Holy Synod’s chargé of prison service to visit Mr Tawadros in prison. Anba Domadios gave Mr Tawadros Holy Communion and took his confession. [https://en.wataninet.com/coptic-affairs-coptic-affairs/coptic-affairs/communion-for-defrocked-monk-sentenced-to-death-for-killing-abbot-of-st-macarius-monastery/33460/]

According to the statement, Anba Pachomius met the family of Mr Tawadros upon their request to offer them moral and psychological support. 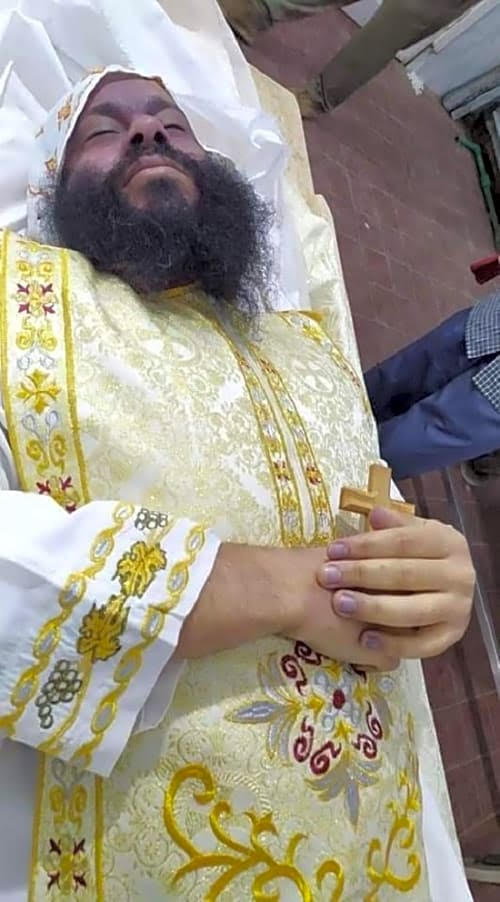 On Saturday 8 May 2021, the Eve of the execution, the prison preacher Fr Bakhoum Emile was asked to attend an execution—Mr Tawadros’s name was withheld—but declined because he was out of town. Fr Dawoud Girgis was delegated instead to attend the execution. According to prison regulations, Fr Dawoud met Mr Tawadros and took his last confession. He says that Mr Tawadros kept repeating: “Remember me Lord when you come in your kingdom.”

The statement said that the Diocese helped Mr Tawadros’s brother, the monk Pachomius al-Rezeiqi, complete all the administrative procedures required to prepare the body for burial and provided a vehicle to move him to his final resting place. This was upon request of the monk Pachomius al-Rezeiqi, but is also standard practice by the diocese with similar cases. However, the statement pointed out, it was the defendant’s brother who with the help of the prison hospital staff prepared and dressed the dead body of Mr Tawadros.

The statement went on to explain that the video footage which features Fr Dawoud speaking of the pre-execution details was made upon request of Mr Tawadros’s family, with the intent of offering comfort to his mother. However, and perhaps because of the difficult moments preceding the execution, Fr Dawoud’s choice of words was not favourable. [Some Copts interpreted the words to imply Mr Tawadros was innocent.] In all cases, Fr Dawoud never imagined the video would be publicly circulated on social media. 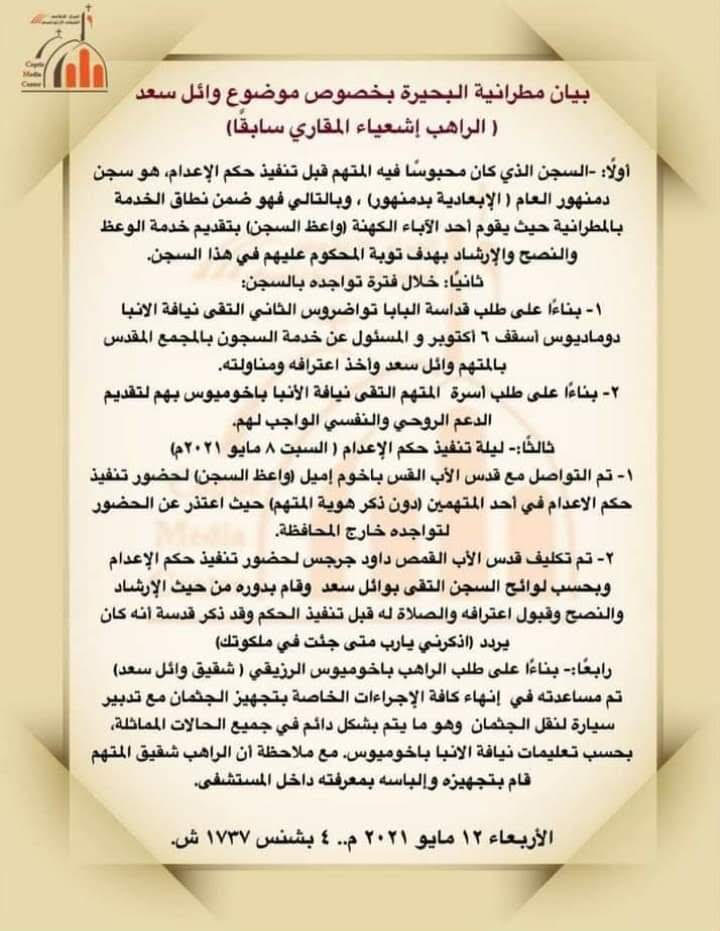 Beheira Diocese stressed its full commitment to all the decisions made by the Holy Synod’s monastic committee. It confirmed that its service to Mr Tawadros and his family prior to or following his execution constituted Christian humane action, and is standard practice by the diocese.

The statement concluded with a call to the Coptic congregation to refrain from irrational exaggeration and devious attempts to shatter the Church’s peace and unity, through affronting the Church and its clergy. “The Church’s congregation must be cautious, wise, vigilant, and discerning, so as not to share unintentionally in the sins of others.”

For full report on the murder of Anba Epiphanius, and the sentencing of his killer: 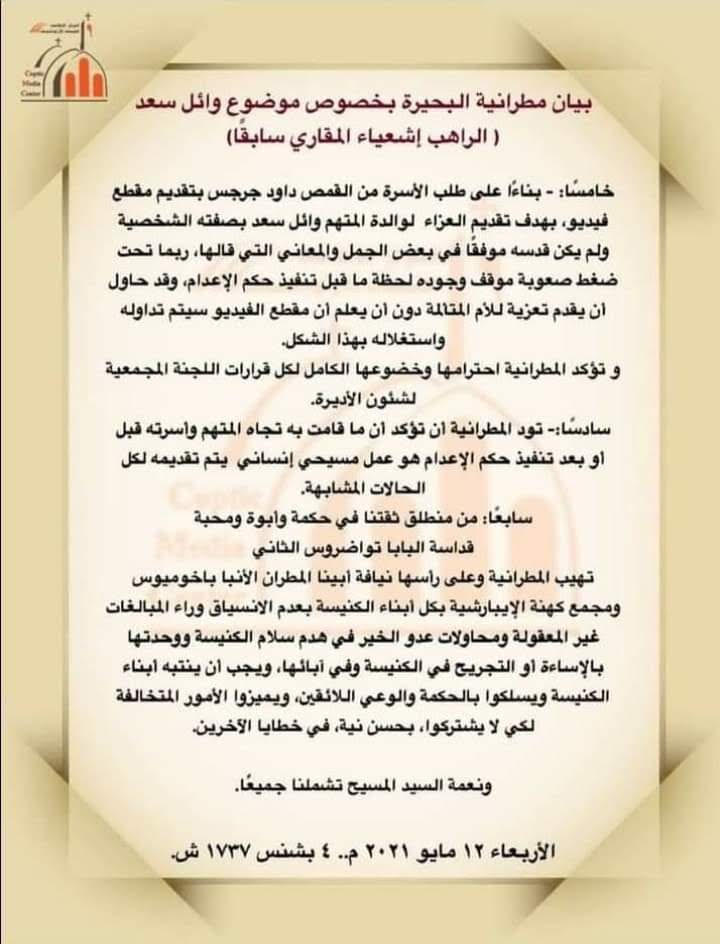