The Coptic Orthodox Church, led by Pope Tawadros II, has issued a statement regarding the current Israeli Palestinian conflict. The statement expressed the Church’s rejection and condemnation of “the brutal attacks against the Palestinians currently taking place in Jerusalem and Gaza Strip”. It said the attacks are claiming innocent lives, and harming women and children with no outcome or benefit other than killing and destruction.”

The Church called all sides to resort to reasonable dialogue and negotiation to avoid blood-shed.

The statement commended the pivotal role of the Egyptian government in supporting Gaza Palestinians by allowing them access to Egyptian hospitals. It also praised Egypt’s political efforts to persuade both sides of the conflict to achieve “a political solution that would preserve the rights of the people of Palestine, and achieve the desired peace.”

On Monday 10 May 2021, during Jerusalem Day events, Israeli police forces used rubber bullets, stun grenades, and tear gas canisters against Muslim worshipers at al-Aqsa mosque. Orthodox Israeli participants attempted to break into the compound through locked gates. According to the Palestinian Red Crescent, hundreds of Palestinians have injured, 250 of whom were hospitalised. With tensions escalating by the hour, rockets were launched from Gaza toward Jerusalem with Hamas publicly taking responsibility. Israeli military countered with devastating air strikes against Gaza. Churches for Middle East Peace (CMEP) called for an immediate cessation of all violence and condemned acts of aggression targeting civilians. 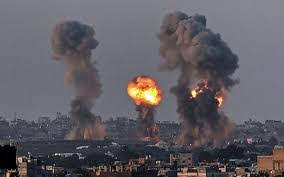