Minister of Emigration Nabila Makram has visited Pope Tawadros II at the papal headquarters in St Mark’s Cathedral in Abbassiya, Cairo, to thank him for the role played by the Coptic Orthodox Church in Kenya in helping a group of Egyptians stranded there, until arrangements could be made to fly them home. Accompanying her were representatives of the group, and Egypt’s Minister of Youth and Sports Ashraf Sobhy.

The Egyptians stranded in Kenya had been unable to return home since the suspension of air travel to and from Cairo on account of COVID-19, The group included members of Egypt’s Olympic team that would have competed in the Tokyo Summer Olympics 2020 and will now compete in 2021. They were flown home through the efforts of the Egyptian Ministry of Emigration which is working to bring back Egyptians stranded abroad, and has already returned some 20,000 of them from various places around the world, The Egyptian government has brought back stranded Egyptians from across the world, including China, US, UK, Kuwait, Saudi Arabia, Sudan, Turkey, Uganda, Rwanda, Chad and Niger.

The Egyptians from Kenya were flown home on an exceptional flight that carried 136 nationals from Ethiopia and Kenya. The flight was operated by Air Cairo, partly owned by thaw national carrier EgyptAir, and landed at Marsa Alam International Airport on 1 May. The passengers were checked, tested and quarantined by the health authorities, and their luggage sanitised.

Ms Makram issued a statement in which she thanked Pope Tawadros and the Coptic Church for actively helping those stranded in Kenya till they could return home. She said they had asked for help from the Egyptian government and, there being no Egyptian Consulate in Nairobi, the Emigration Ministry contacted Pope Tawadros to ask if the Coptic Church in Kenya could help. The Pope directly responded, she said. He contacted Anba Boulos, Coptic Bishop of Kenya, who then opened the doors of the diocese to them, hosting those who needed accommodation, and offering financial support to others, while helping all to be in contact with Cairo.

Once out of quarantine, the Kenya group asked to visit the Pope to extend their gratitude for the month-long support they had received at the hands of the Coptic Church in Nairobi. They paid that visit with Mr Sobhy and Ms Makram who profusely thanked the Pope, saying that the Church’s help had been direly needed until the numerous hard-to-get permits for travel under COVID-19 restrictions were obtained.

Pope Tawadros quoted the time honoured Egyptian folk saying said that people had to stand by one another, especially in difficult times.

“It was God’s will that you should be in Kenya,” the Pope said, “where the Coptic Church has a prominent role in serving the community. Anba Boulos established a hospital there 30 years ago, and continues to serve all, Kenyans and Egyptians.

“It made me very happy to see the Egyptian returnees back home, holding up their Egyptian passports in pride.” 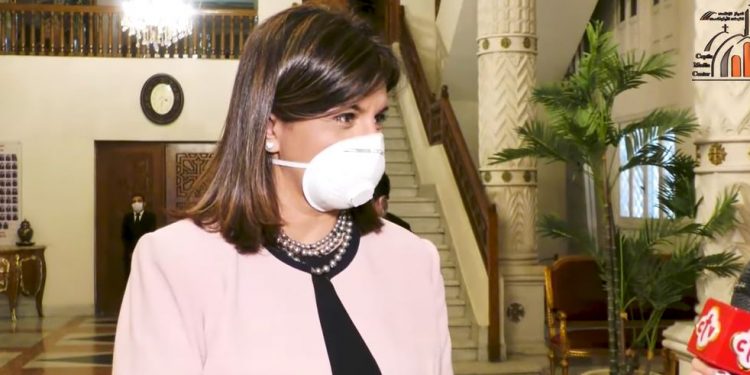