The Coptic Orthodox Church has issued a statement on the crisis that erupted Sunday 30 May, between the monastery of St Macarius the Alexandrite in Wadi al-Rayan in Fayoum, some 150km southwest Cairo, and the government. The term “monastery” is commonly used by Egyptians to denote any monastic community, whether or not it is officially recognised by the Church; such recognition requires fulfilment of specific criteria which some “monasteries” may not have yet fulfilled. 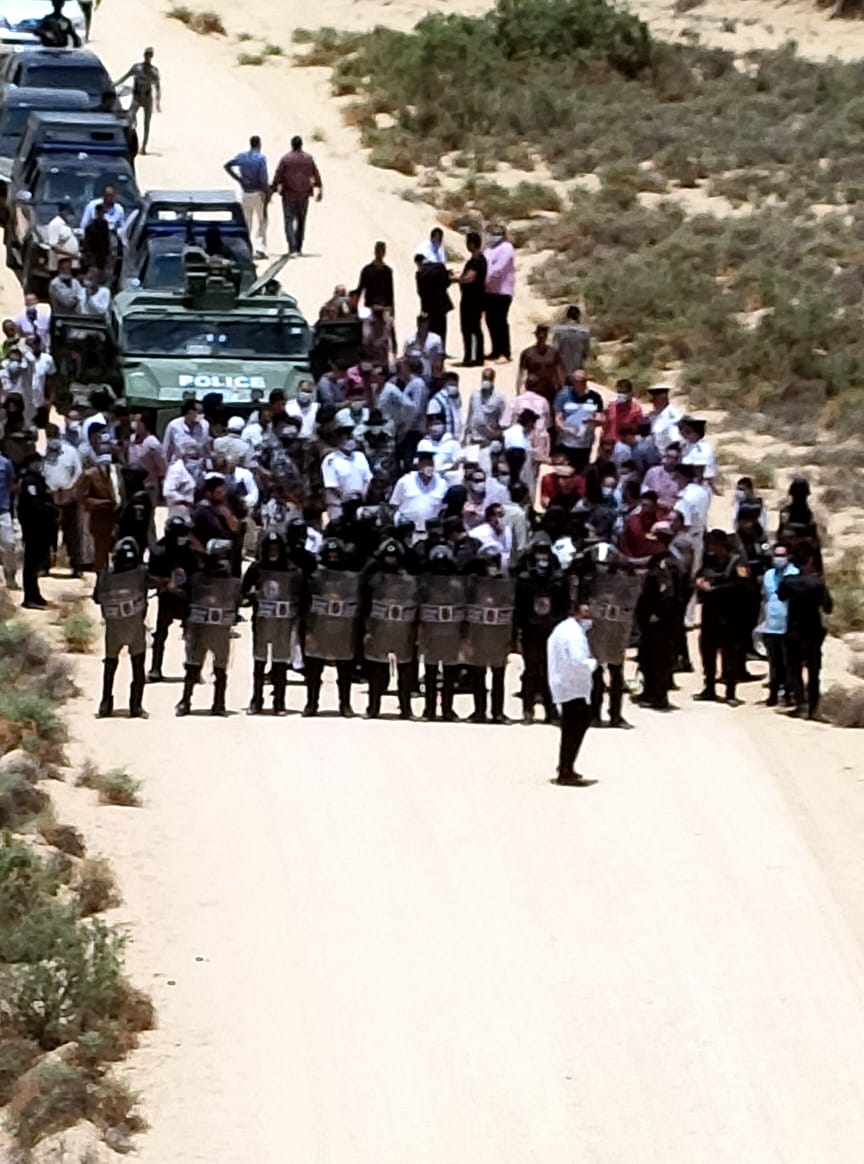 The crisis erupted when police forces headed to the “monastery”—accompanied by a demolition squad, to execute an official order to seize a farm established by the monastery, and to pull down any encroaching or violating building. The order was issued by the Environment Ministry’s Nature Reserves Authority because the monastery had not paid the annual dues agreed upon with the Authority in 2017 as lease for a 1000 feddan piece of land which the monastery farms [One feddan = 4,200 square metres]. The unpaid dues amount to EGP 4 million.

The farmland is adjacent to the monastery and is cultivated by the monks to generate revenue for their livelihood. The monks attempted to prevent the police from executing the demolition order; they told Watani that a number of them—they did not specify the exact number—were arrested. 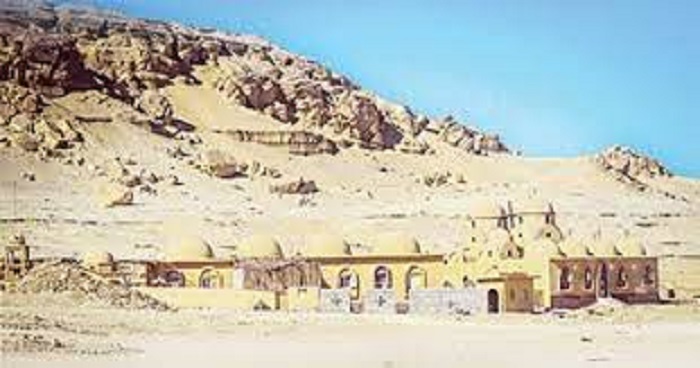 The story goes back to September 2014 when the Egyptian government began working on a plan to build a road that would link Ain Sukhna in the east of Egypt to al-Dabaa in the northwest and would pass through Wadi al-Rayan in Fayoum. In the process, the road had to cross land illegally claimed by the Coptic Orthodox monastic community of St Macarius the Alexandrite, that had gradually settled there since the 1990s. The place and its monk community are not recognised by the Coptic Church as a “Thriving Monastery” because it does not fulfil the conditions to qualify for such a recognition.

The site is part of the nature reserve of Wadi al-Rayan, and is also part of a sprawling 700-feddan stunningly beautiful area of 4th-century cave cells and churches that were inhabited by early Christian hermits since the fourth century and until the 12th century.

An agreement was finally reached between the Egyptian government and the Coptic Orthodox Church to allow the monks to continue their settlement on 3,500 feddans of State-owned land in the natural reserve of Wadi al-Rayan in exchange for annual leasing fees of EGP511,000. Also included in the agreement was an additional 1000-feddan of farmland which the monks had reclaimed from the desert and which they cultivated for a living. The full land allotted to the monks included the church, monastic facilities, monk cells, water wells, and farmland. The land which had previously been claimed by the monks and which was subject of the dispute with the government amounted to 13,500 feddans.

“Police forces headed today, Sunday 30 May 2021, to the district of St Macarius the Alexandrite in Wadi al-Rayan to put into force a decision by the Nature Reserves Authority to reclaim part of the land utilised by the community settled there. That part is a 1000 feddan-wide land [1 feddan = 4,200 square metres] that was the subject of a lease contract signed with the Ministry of Environment [in 2017]. The decision was taken as a result of not paying the lease in question since 2017 and until the present. The decision included demolition of all constructional violations on the land in question.

“We would like to make the following points clear:

“1. An official contract was concluded in August 2017 between the Church and the Ministry of Environment. The contract gave the settlers in the area the right to use the land they settled on as follows: An area in which to reside and practise religious activity; this area was outside the scope of today’s incident. Another area of 1000 feddans was leased to the settlers in order to use for economic, agricultural activity. It is not possible for anyone to own that land since it is part of a nature reserve.

“2. During the last four years, the Ministry of Environment sent a number of letters demanding payment of late dues, the last such letter was dated 9 April 2020, to no avail.

“3. Dr Inass Abu-Taleb, Executive Head of the Authority for Environmental Affairs, paid a visit to the land in question on 17 August 2020, upon invitation of Anba Abra’am, Metropolitan of Fayoum, and current supervisor of the region, to see for herself the field situation.

“4. The last letter from the Ministry of Environment was on 30 March 2021 demanding payment of the dues, otherwise the contract would be null and void. All legal proceedings would be taken, the letter said, and the dues together with their interest until the land in question was reclaimed by the Ministry would be collected in an official manner.

“We never desired that matters would come up to today’s incident, but the law ought to have been enforced following the repeated warnings. We hope that calm would prevail over the region.

“Chair of Synodal Committee for Monasteries and Monasticism, Anba Danial, Bishop and Abbot of Anba Pola Monastery in the Red Sea region” 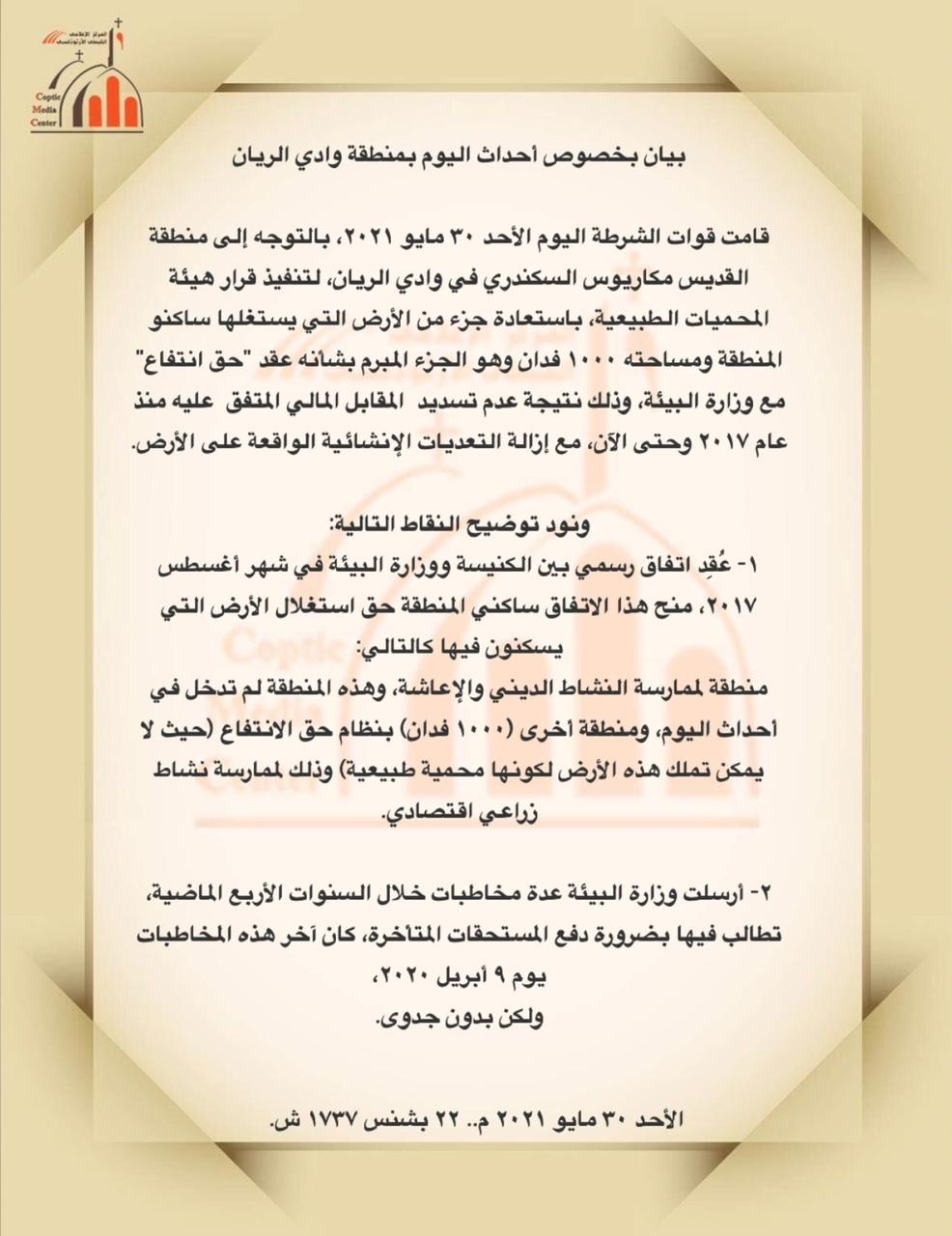 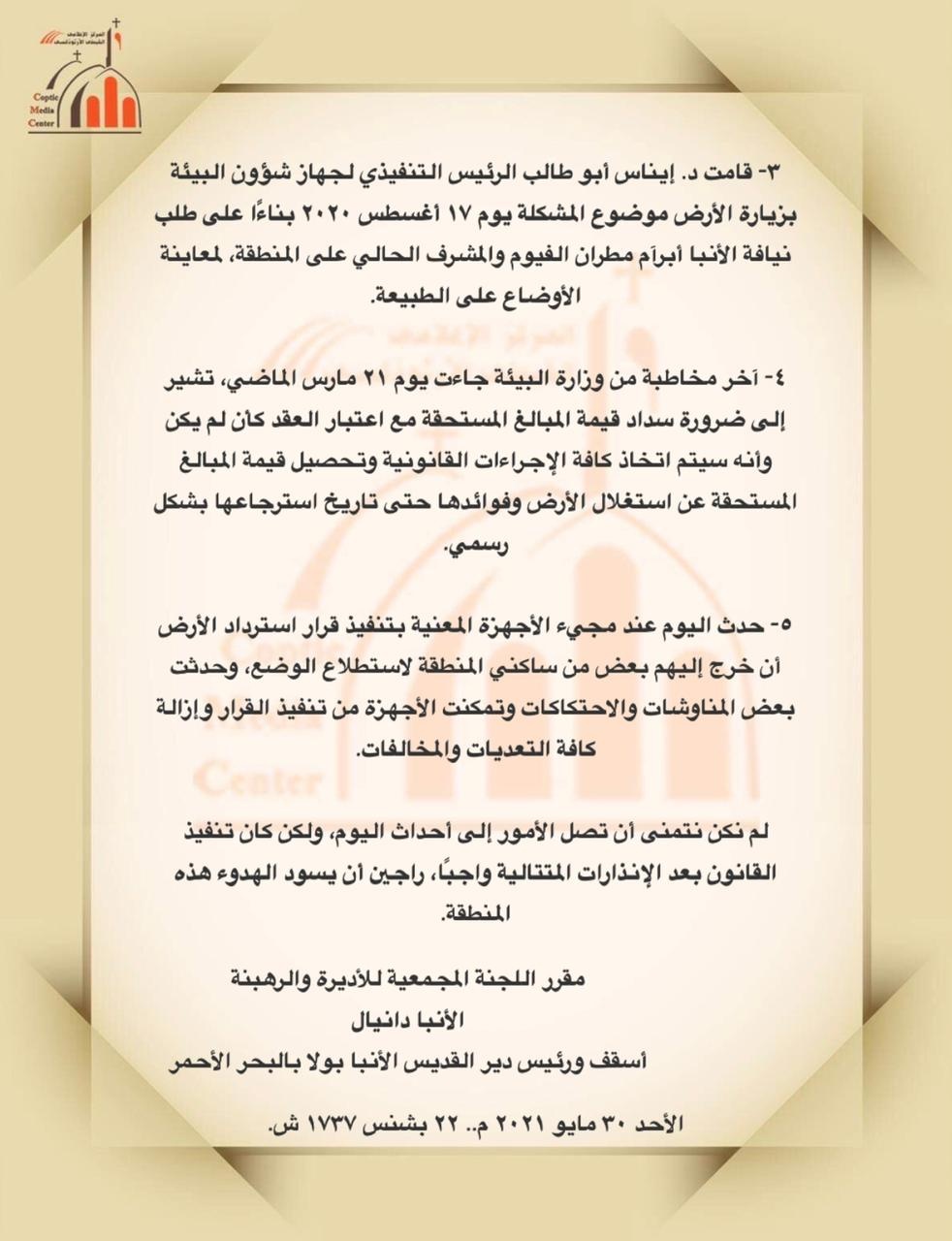