Eleven terrorists on trial for killing nine Copts in Helwan

Egypt’s Prosecutor-General Nabil Ahmad Sadeq, has referred to criminal court eleven suspects caught by the police in the wake of an attack on 29 December 2017 against Copts in front of the church of Mar-Mina in the Cairo southern suburb of Helwan.

The 11 suspects are men aged between 30 and 58 and comprise labourers, agriculture peasants, technicians, businessmen, teachers, and traders. One of them, Ibrahim al-Dessouqi Ahmad, 42, is a policemen in al-Wasta, Beni Sweif, some 100km south of Cairo. The charges against them cover terror activities from 2016 to March 2018, and include premeditated murder of nine Egyptian citizens for their being Christian, also a policeman; intended murder; robbery; unlicensed procuring and carrying arms; founding and leading a terror organisation that aims at halting the application of the Constitution and law, prohibiting State institutions and public authorities from executing their jobs, assaulting the personal freedom of citizens, harming national unity and social peace through embracing the thought of Daesh also known as the Islamic State IS.

The two gunmen had, on their way to the church, attacked a Coptic-owned shop that sells home appliances, killing two Coptic brothers that worked there.

Five persons were injured and moved to hospital.

A funeral service was the following day held for the dead at the church of the Holy Virgin in Helwan, and they were buried in a collective tomb at the 15 May cemetery.

President Abdel-Fattah al-Sisi condemned the attack which he described as “vile and despicable, against a place of God”. He said such attacks would not sow divisions among Egyptians, as they were meant to. 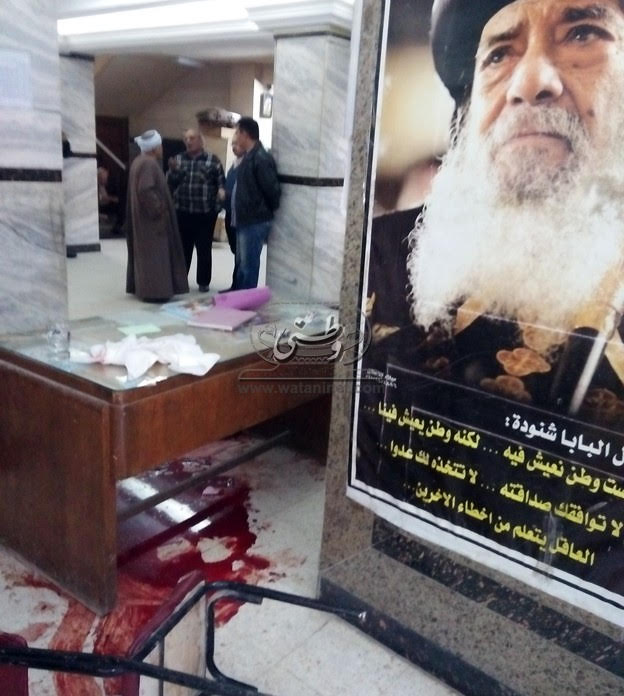